ABSTRACT: The aim of this study was to compare the antiulcer activity of methanolic extracts of Wattakaka volubilis (Linn.f.) Staf and Tabebuia rosea (Bertol.) DC in rats. The anti-ulcer effect was evaluated using Anti secretary model (chemical induced pylorus ligation). Ranitidine were used as standard drugs for ulcer studies. The extracts were administered orally at 500 mg/kg. The result of the present study indicates oral administration of Wattakaka volubilis and Tabebuia rosea produced significant inhibition of the gastric lesions induced by Anti secretary model (Chemical induced pylorus ligation. Comparison was made between two plant extracts and methanolic extract of Wattakaka volubilis than Methanolic extract of Tabebuia rosea. Preliminary phytochemical screenings indicated the presence of alkaloids, flavonoids, tannins, saponins, phenols, terpenoids, glycosides and sugars in both the extracts. This study confirmed the antiulcer properties of this plant as it is used in traditional medicine

INTRODUCTION:Ulcer is defines as erosion in the lining of the stomach or duodenum and is caused by the disruptions of the gastric mucosal defense and repair systems 1.

Ulcer in the stomach is called gastric ulcer and in the duodenum is called duodenal ulcer and together peptic ulcer. Gastric ulcers, one of the most widespread disorder 2.

These agents have been implicated in the pathogenesis of gastric ulcer, including enhanced gastric acid and pepsin secretion, inhibition of prostaglandin synthesis, and cell proliferation growth, diminished gastric blood flow and gastric motility 4.

Peptic ulcer therapy has undergone many studies over past years and a number of synthetic drugs are now available for the treatment. Reports on clinical evaluation of these drugs show that there are incidences of relapses and several adverse effects and danger of drug interaction during drug therapy 5&6.

Plant Materials: The leaves of Wattakaka volubilis and Tabebuia rosea were procured from Dr. K Madhava Chetty, Assistant professor, Department of Botany, Sri Venkateshwara University, Tirupathi, Andhra Pradesh, India. The plant was identified by a botanist, and voucher specimen was deposited in Sri Venkateshwara University, Department of Botany and a copy has been preserved for the future reference at the herbarium of the institute TRR College of Pharmacy (1447/PO/a/11/CPCSEA). After authentication, the leaves were cleaned and shade dried and milled into course powder by a mechanical pulverizer.

Preparation of Plant Extract: The leaves of these plants were dried under shade at room temperature (27-30ºC) for 15-30 days, after which the leaves of the plant were chopped and grounded into coarse powder. The powdered material (2 kg) was defated with petroleum ether (60-80ºC) in a soxhlet extraction apparatus and marc was extracted with methanol (1000ml) overnight, at room temperature with constant stirring. The extract was filtered and the filtrate was concentrated at 30ºC under reduced pressure in a rotary evaporator. The crude extract was dissolved in 1% Tween 80 to required concentrations and used for the experiments.

Brick red precipitate was observed which confirmed the presence of reducing sugars.

Chemical Induced Pylorus Ligation Ulcer Model: Wistar albino rats weighing between (100-130g) were divided into 5 groups of 6 rats in each. They were under fasting for 24hrs with water ad libitum prior to experiment in individual cages with measures taken to avoid caprophagy. Group 1 was served as normal control given with vehicle only. Group 2 with standard drug ranitidine (8mg.kg) & ethanol and Groups 3 and 4 were treated with doses of MEWV and METR (500mg/kg) respectively, Group 5 with standard drug ranitidine only.

Experimental Procedure: Five groups (n=6) of wistar rats were used to study the anti-ulcer activity of methanolic extracts of Wattakaka volubilis and Tabebuia rosea. 5% acacia mucilage (5ml/kg), methanolic extracts, ranitidine and ethanol are administered to the animals per orally (p.o).

After 30 min of this treatment, animals of groups 2-5 were administered with 5mL/kg ethanol to induce ulcer 9. After 15 min of ethanol administration, under light ether anesthesia, the abdomen was opened and the pylorus ligation performed and then sutured. 4 h after pylorus ligation all the animals were sacrificed with excess of anesthetic ether and the stomach of each rat was dissected out.

Gastric juice collected into centrifuge tubes was centrifuged at 1000 rpm for 10 min and volume was noted. The pH of the gastric juice was recorded by pH meter. The gastric content was subjected for analysis of free and total acidity. The stomachs were washed under running tap water and then focused under microscope to note the ulcers in the glandular portion. The number of ulcers per stomach was scored and the scoring is done as per standard procedure10.

The formula for calculation of Percentage ulcer inhibition;

Determination of free and total acidity: 1 ml of gastric juice was pipette into a 100 ml conical flask, 2 or 3 drops of Topfer’s reagent was added and titrated with 0.01N Sodium hydroxide until all traces of red color disappears and the color of the solution turns to yellowish orange. The volume of alkali added was noted. This volume corresponds to free acidity. Then, 2 or 3 drops of phenolphthalein solution was added and titration was continued until a definite red tinge appears. Again the total volume of alkali added was noted now this volume corresponds to total acidity.

Acidity was calculated by using the formula;

Statistical Analysis: The results were shown in the Table No.1. The values expressed as mean ± SEM from 6 animals. The results were subjected to statistical analysis by using one way ANOVA followed by Dunnett’s-‘t’- test to verify the significant difference if any among the groups. P<0.01*and P<0.05**were considered significant.

The pictures of the excised stomach and the graph indicating the ulcer indices of all groups are represented in fig. 1 and 2. 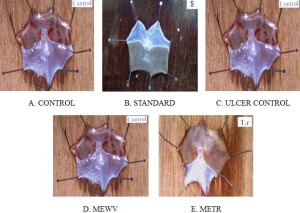 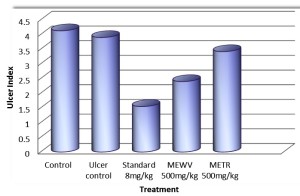 DISCUSSION: The results obtained in the study showed that the extract and fraction of Wattakaka volubilis and Tabebuia rosea possess anti-ulcer activity. The extract significantly reduced the ulcer index in rats. Methanolic extract of Wattakaka volubilis and Tabebuia rosea significantly inhibited the formation of ulcers against ethanol challenge followed by pylorus ligation. Narcotizing agents such as ethanol, when intragastrically to rats produce severe gastric hemorrhagic erosions. Ethanol causes disturbances in gastric secretion, damage to the mucosa, alterations in the permeability, gastric mucus depletion and free radical production.

This is attributed to the release of superoxide anion and hydroperoxy free radicals during metabolism of ethanol as oxygen derived free radicals has been found to be involved in the mechanism of acute and chronic ulceration in gastric mucosa11. After pylorus ligation gastric ulcers are due to over production of gastric acid or decrease in gastric mucous production. Pylorus obstruction may lead to acid-pepsin accumulation and subsequent digestion of mucosa.

The cause of gastric ulcers after pylorus ligation is due to an increase in gastric HCl secretion. Increased volume is an important factor involved in ulcer formation of the stomach which is exposed to the accumulated acid 12. Hence, the anti-ulcer activity of the methanolic extract of Wattakaka volubilis and Tabebuia rosea suggest the anti-secretary activity via antioxidant effects as their possible mechanism of action.

The phytochemicals analysis showed the presence of Flavonoids in methanolic extract of Wattakaka volubilis and Tabebuia rosea.

Flavonoids are the gastro protective materials for which antiulcerogenic efficiency has been extensively confirmed. It is suggested that, these flavonoids would be able to inhibit the vagus-vagal reflux which increases the acid secretion and counteract the deteriorating effects of reactive oxidants in gastrointestinal lumen.

In conclusion, the results indicated that the methanolic extract of Wattakaka volubilis and Tabebuia rosea, exhibited significant antiulcerogenic effects that support the evidence for its folkloric use, while these anti-ulcerogenic effects might possibly be due t the presence of flavonoids.