The present study was carried out to investigate the effect of oral feeding of A. indica leaf (powder, aqueous and 80% ethanol extract) in STZ induced type 2 diabetic rats. Diabetes was induced by single intraperitoneal injection of STZ to 48hrs old pups and experiments were carried out three months later. For chronic experiment type 2 rats were divided into 5 groups: 1) Water control, 2) Glibenclamide (5gms/kg b.w.) treated, 3) A. indica powder [mixed with rat feed (1.25 g/kg b.w.)], 4) Aqueous extract and 5) 80% ethanol extract treated. The test drugs were used at a dose of 1.25 g/kg b.w. for 28 consecutive days. Body weight was checked every week. Blood was collected by cutting the tail tip at the beginning and on the days 7, 14, 21 and by decapitation on the 28th day. Results of the experiment showed that A. indica leaves exerted a gradual reduction in serum glucose level of type 2 diabetic rats. A significant reduction in serum glucose level was noticed on the 21 day (p = 0.001 for powder and p = 0.001 for ethanol extract) as well as on 28 day (p = 0.009 for powder, p =0.02 for aqueous extract and p = 0.001 for 80% ethanol extract). In addition to hyperglycemic effect A. indica leaf also showed hypolipidemic effect. Serum total Cholesterol and TG level decreased significantly by different extracts and powder of A. indica. Glibenclamide as expected, ameliorated diabetic condition significantly (p<0.05). Body weight of the rats tends to increase throughout the study period. No significant change was observed in serum insulin level. The obtained results suggest that A. indica leaf improves the glycemic and lipidemic status of type 2 diabetic rats. The efficacy of A.indica leaf (powder, aqueous extract and 80% ethanol extract) as hypoglycemic and anti-lipidemic agents was found ethanol extract > aqueous extract > powder.

INTRODUCTION: Hyperglycemia and hyperlipidemia are two important characters of diabetes mellitus, an endocrine disorder based disease. In modern medicine, no satisfactory effective therapy is still available to cure diabetes mellitus 1. Though pharmaceutical drugs like sulfonylureas and biguanides are used for the treatment of diabetes but these are either too expensive or have undesirable side effects or contraindications 2, 3. In recent years, there has been renewed interest in plant medicine 4, 5, 6 for the treatment against different diseases as herbal drugs are generally out of toxic effect 7, 8 reported from research work conducted on experimental model animal. Although in human, whether there is any toxic effect are not investigated. Isolated studies screened various plants having “folk medicine reputation” by biochemical test for this of antidiabetogenic effect 9.

Azadirachta indica (family- Meliaceae [Melioideae]), a medium-sized tree, is found throughout the South Asian region. It is one of the most versatile medicinal plants having a wide spectrum of biological activity. Every part of the tree has been used as traditional medicine for household remedy against various human ailments, from antiquity.

Traditional healers claim that the leaves of the plant possess antidiabetic properties. Scientific reports also support the hypoglycemic activity of this plant 10, 11, 12, 13. Although there exists a substantial number of reports claiming the hypo/anti-hyperglycemic effect of different parts (leaves, flowers, seeds, fruits, roots and bark) of this plant in normal as well as STZ (streptozotocin) induced diabetic animals, there was no published report regarding the comparative study of A. indica leaf crude powder and different extracts (aqueous and 80% ethanol) on glucose homeostasis. So the aim of this present study is to find out the comparative study of A. indica on glycemic, insulinemic and lipidemic status of type 2 diabetic model rats.

Plant materials and preparation of test sample: The fresh green leaves of Azadirachta indica Linn. were collected from Kushtia, Bangladesh. The collected fresh leaves of Azadirachta indica were weighed (3.630 kg), washed and air dried hygienically. The dried leaves were homogenized to powder with the help of grinder and 1.910 kg powder was obtained. Then the powder was sieved and 1.635 kg of fine powder was obtained which was stored in the refrigerator at -20oC.

500g each of dried leaf powder were dissolved in 4.5L of boiled water and 1.5L of 80% ethanol. These suspensions were filtered with thin and clean cloth and then filtered by filter paper. The suspensions were then dried by BUCHI Rota vapor R-114, connected with BUCHI water bath B-480 at 40oC. Finally the semi-dried extracts were dried using a freeze-drier (HETOSICC, Heto Lab Equipment Denmark) at -55oC temperature and finally 85.60g and 65.30g of water and ethanol extracts were obtained respectively.

Experimental Animals: The study was conducted on adult Long-Evans (both sexes) rats (weighing 150-240g) bred at the BIRDEM animal house maintained at a constant room temperature of 22±5oC, 40-70% humidity conditions and the natural day-night cycle with an ad libitum access to food except the day of experimental procedure when animals were used after 12hrs fasting. The rats had no access to food during the whole period of blood sampling. The influence of circadian rhythms was avoided by starting all experiments at 8.30 a.m.

Induction of Type 2 Diabetes to the Rats: Diabetes stimulating Type 2 was induced by a single intra-peritoneal injection of streptozotocin (90mg/kg body weight, dissolved in 0.1 citrate buffer, pH 4.5) to 48hr old pulps of Long-Evans rats as described by Bonner-Weir et al., 1981 14. Experiments were carried out 3 months latter to STZ injection and those rats having blood glucose level 8-12 mmol/l at fasting condition, were considered to carry out the experiments.

Experimental design: The experimental diabetic rats were divided into five groups as follows:

Rats of all groups were kept under similar environmental conditions, and were provided with enough food and water throughout the experiment. The body weight of each rat was measured in each week.

Statistical Analysis: Data from the experiments were analyzed using the Statistical Package for Social Science (SPSS) software for windows version 12 (SPSS Inc., Chicago, Illinois, USA). All the data were expressed as Mean ± SD or as Median (Range) as appropriate. Statistical analysis of the results were performed by using the student’s t-test (paired and unpaired) or ANOVA (analysis of variance) followed by Bonferroni post Hoc test or Mann Whitney (u) test. The limit of significance was set at p<0.05.

Effect on the body weight (BW): There was a tendency to increase the body weight in all groups. However, only aqueous extract on 7th day showed a significant increase (p = 0.04) in comparison with ethanol extract treated group (Table 1). 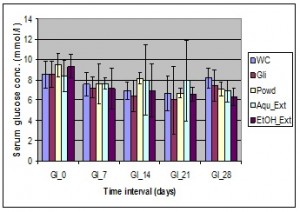 Data are presented as Mean±SD and compared using paired‘t’ test. *p<0.05; `n’ indicates number of rats in each group

Effect on serum triglyceride (TG): It was found that all of the groups had decreased tendency regarding to serum TG level in comparison to baseline value. The reducing tendency of TG level among different groups were 17%, 18%, 60% and 24% for WC, powder, aqueous extract and ethanol extract respectively. While comparing between groups (using Mann-Whitney U test), aqueous extract showed the most significant triglyceride lowering effect (p< 0.035) (Table 3).

DISCUSSION: Oral hypoglycemic agents and insulin is the mainstay of treatment of diabetes and are effective in controlling hyperglycemia, however, they have prominent side effects and fail to significantly alter the cause of diabetic complications 15. As the knowledge of heterogeneity of this disorder increases, it is needed to look for more efficacious agents with lesser side effects. Though the development of modern medicine results in the advent of modern pharmacotherapeutics (in additions to insulin, sulphonylureas and biguanides) like a-glucosidase inhibitors and thiazolidinediones, there is still a need to look for new drugs as the existing drugs do not modify the course of diabetic complications. Therefore, as the disease is progressing unabated, there is an urgent need of identifying indigenous natural resources with antidiabetic properties in order to develop them as new therapeutics.

In the present study A. indica leaf powder, aqueous extract and 80% ethanol extract was fed to type2 diabetes rats for 28 consecutive days. In our study, we found that the type 2 rats from all groups gained in body weight throughout the study period. The rise was not significant except aqueous extract on 7th day showed a significant increase (p= 0.04) in comparison with ethanol extract treated group. Our findings are in accordance with the findings of Hussain et al., 16 who also observed the gain in body weight of rats treated with aqueous extract of A. indica for 16 weeks. The probable mechanism for increased weight in Type 2 rats treated with A. indica is due to its ability to reduce hyperglycemia.

Regarding to hypoglycemic activity, it was found that continuous treatment with A. indica powder and extracts for 28 days caused a significant reduction in serum glucose level of  Type 2 diabetic rats. The results are consistent with others 12, 13, 17, 18, 19, 20.

The possible mechanism underlying the hypoglycemic activity of different extracts of A. indica may be potentiation of pancreatic secretion of insulin from b-cell coupled with extra pancreatic mechanisms like decreased glycogenolysis and enhanced glycogenesis by the liver; and enhanced transport of blood glucose to peripheral tissues. As it was seen from our experiment, serum insulin level did not change significantly, rather there was comparatively less serum insulin level than the base line level in A. indica treated groups.

There is another similar report claiming that A. indica does not modulate insulin effect on glycogen metabolism 21 rather it blocks the inhibitory effect of serotonin on insulin secretion/release in pancreas of rats mediated by glucose, eventually glucose control. In another report it was found that the increased peripheral glucose uptake was due to inhibitory action of insulin by inhibiting glycogenesis 20. Hence, the obtained hypoglycemic effect by feeding A. indica for 28 days was probably, due to, increased peripheral utilization of glucose. A. indica leaves are known to have compound like flavonoids, quercetin which possess hypoglycemic activity. The presence of such constituent might be responsible for antidiabetic activity of A. indica.

Apart from the blood sugar lowering effect, beneficial changes in lipid profile have also been observed by A. indica extract and powder. Abnormalities in lipid profile are one of the most common complications in diabetes mellitus, which is found in about 40% of diabetics. Since dyslipidemia plays an important role in the pathogenesis of macro- and microvascular complications of diabetes, hence, improvement in the lipid abnormalities must play beneficial role in inhibiting the complications of diabetes.

It has been claimed that hypercholesterolemia and hypertriglyceridaemia occurred in STZ induced diabetic rats 22. Consecutive administration of A. indica powder and extracts for 28 days lowered serum triglycerides. Significant (p=0.035) reduction in triglyceride and serum cholesterol (P=0.02) level was observed with aqueous extract of A.  indica. The obtained result is supported by the findings of other investigator 23. These findings revealed that a continuous administration of the aqueous extract of Azadirachta indica improves serum lipids secondary to the diabetic state.

Thus, it can be concluded that, Aadirachta indica (leaf) has got promising antihyperglycemic and hypolipidemic effects in respect to Type 2 diabetic model rats and the accordance of its effect of efficacy can be explained as ethanol extract > aqueous extract > powder.

ACKNOWLEDGEMENTS: We gratefully acknowledge the financial support of International Program for the Chemical Sciences (IPICS), Uppsala, Sweden; International Foundation for Sciences (IFS), Stockholm, Sweden and Diabetic Association of Bangladesh in conducting this study.