ABSTRACT: Aceclofenac is new NSAID which demonstrates its anti-inflammatory and analgesic activity in a concentration of 1.5 %. Topical mode of administration help to avoid typical side effects associated with oral administration of NSAIDS such as irritation and ulceration to gastric mucosa. Hence, an attempt has been made to prepare topical formulations using various dermatological bases and to evaluate release properties and improved stability throughout its shelf life. Cream, gel and emulgel topical formulations were formulated and characterized for its physicochemical parameters such as pH, spread ability, rheological properties and occlusivity. The in-vitro permeation potential of Aceclofenac was performed through Dow Corning 7-4107 silicone elastomer membrane using Franz type diffusion cell. The in-vitro permeation rate of drug from silicone cream base was significantly higher compared to other vehicles. The in-vivo animal study was performed on croton oil induced ear edema model. Developed Aceclofenac cream formulation showed 66.67% inhibition of ear edema which was significantly higher than other formulation. The stability study of Aceclofenac formulations was performed at 25°C/60 % RH, 30°C/65 % RH and at 40°C/75 % RH conditions. Stability study revealed that Aceclofenac possessed higher stability in silicone cream formulation compared to gel and emulgel formulation. Hence, silicone cream base is a stable and efficient vehicle for delivery of Aceclofenac through dermal route.

INTRODUCTION: Topical drug delivery of non-steroidal anti-inflammatory drugs (NSAIDs) has been recognized as an alternative to oral therapy. The advantage of topical Delivery of NSAIDS is the direct accessibility of them to the affected tissues with minimal systemic side effects, such as peptic ulcer disease and gastrointestinal haemorrhage 1.

The therapeutic efficacy of a topical formulation depends on its composition of dermatological base and the physicochemical properties of the base. The composition can affect drug release rate and permeability properties of drugs through skin. Therefore, selection of appropriate dermatological base is most important parameter for increasing efficacy of topically applied formulation 2, 3. 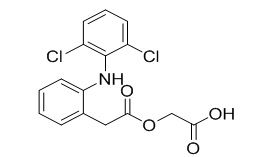 Preliminary clinical studies have shown that Aceclofenac 1.5% applied topically for 4 days is as well tolerated as placebo 4, 5. Aceclofenac is an example of BCS class II compound, due to its lipophilic nature it will better absorbed by tissue and will show better action 6. Pharmacologically Aceclofenac stimulates glycosaminoglycan’s (GAG) synthesis which results in enhancement of skin permeation of NSAIDs.  Stratum corneum is the principal barrier for cutaneous penetration allowing slow absorption of the drug 7. The importance of Aceclofenac as a new generation NSAID has inspired development of topical drug delivery. Topical formulation of Aceclofenac gives the opportunity to deliver the drug directly to the diseased site 8, 9.

MATERIALS AND METHODS: Aceclofenac was obtained as a gift sample from Ajanta pharmaceuticals Ltd. Methyl salicylate, menthol, camphor and silicone cream base were procured from Mascot Pvt. Ltd. Carbopol resin (Synthalen K) was procured from sigma 3V. Other chemicals used were of analytical reagent grade.

Animals: Approval for the use of animals in the study was obtained from the CPCSEA (Institute of chemical Technology, Regn. No: 87/1999/CPCSEA dated 28th April, 1999) or Institutional Animal Ethics Committee (IAEC) Mumbai, India.

Preparation of semi-solid dosage forms: Semi solid formulations of Aceclofenac were prepared according to the composition given below in Table 1 with various dermatological bases (Aqueous silicone cream base, Carbopol gel base and emulsified gel base) and applied standard procedures. In each of the formulation Aceclofenac incorporated into the formulation at 1.5% concentration. To obtain homogenous mass all the actives were triturated by using geometrical dilution procedure. The three bases were chosen for their different hydrophilic, hydrophobic and viscosity characteristics.

The clear solution of actives was added in small aliquots in silicone cream base with constant agitation. The cream was stirred till desired consistency and uniform cream was obtained.

Preparation of Aceclofenac Carbopol Gel (AC 2): Aceclofenac was added to PEG 400 and sonicated until active drug was completely soluble. Synthalen K was sprinkled into a mixture of measured amount of purified water containing dissolved Na-metabisulphite and Na-methyl paraben and agitated at high speed. This mixture was soaked overnight to provide complete swelling of polymer. The clear solution of active was added in small aliquots to gel base with constant agitation followed by neutralization (pH 7) using Triethanolamine.

Preparation of Aceclofenac Emulgel (AC 3): An oily phase of the emulsion were prepared by adding clear solution of Methyl Salicylate, Menthol, Camphor and Aceclofenac to melted Glycerol Monostearate (GMS) followed by addition of Butylated hydroxytoluene, Methyl Paraben and Propyl paraben. An aqueous phase for emulsion comprised of Tween 20, Span 85 and purified water.

Organoleptic properties: The physical appearance of formulations was checked visually (Appearance, Color, odor and homogeneity) while greasiness was assessed by application into the skin surface.

pH: The pH of the Aceclofenac formulations was determined using a Eutech digital pH meter.

The spreadability of obtained topical formulation was analyzed using texture analyzer Brookfield engineering labs which consist of a set of matched male and female Perspex cones. When the probe comes in contact with the sample, the instrument begins to measure the triggered force using test speed. During this time, the force required to penetrate the sample increases and at a specified penetration distance the probe withdraws from the sample at the post-test speed. The graph of Time (seconds) vs. Load (gm.) was plotted. The graph indicates that maximum force value is a measure of the firmness of sample at specified depth and area under positive curve indicates the energy required to deform the sample which is the hardness work done. The firmness and energy required to deform the sample are measures of the spread ability. Lower the firmness and hardness work done value indicates a more spreadable sample. (Brookfield Engineering laboratories)

Stability under centrifugation: The cream was evaluated for creaming i.e. aggregation of emulsified oil particles at the top of the sample. Two centrifugation tubes filled with 10 ml of cream were centrifuged at 5000 rpm for 30 mins and evaluated for phase separation. It evaluates the stability of samples under high stress conditions and accelerated deterioration of the formulation 11, 12.

Occlusion studies: 10 ml of water was added to beaker which covered with cellulose nitrate filter paper and sealed. 200 mg of sample was spread evenly with a spatula on the filter surface. The Beaker covered with cellulose filter paper but without applied sample served as reference sample.  The samples were stored at 32°C (skin temperature) and 50–55% RH for 24 hrs. The samples were weighed after 24 hrs which gives the water loss due to evaporation at each time (water flux through the filter paper).The occlusion factor F was calculated according to the following equation;

In vitro drug release study: In vitro permeability studies were carried out using Franz glass diffusion cell type apparatus containing six diffusion cells. The diffusion apparatus have 0.785 cm2 diffusion area and the volume of receptor chamber is 10 ml. Dow Corning 7-4107 Silicone elastomer was used as semi-permeable membrane for 8 hrs permeation studies, which is soaked in receiver medium before mounting on Franz diffusion cells. Phosphate buffer pH 7.4 was used as receptor medium. A weighed quantity of formulation were placed evenly on the surface of the membrane and immersed slightly on 10 ml receptor medium which was continuously stirred with magnetic stirrer and maintained at temperature 32±0.5°C. Aliquots of 2 ml were withdrawn at specified time interval up to 8 hrs.  The withdrawal aliquots were diluted suitably and Aceclofenac content was estimated by spectrophotometrically at 275 nm.

Kinetics of drug release study:The in-vitro release data of all three semisolid formulations were subjected to kinetic analysis to establish the drug release mechanism. The release data were fitted to the zero-order, first order and matrix (Higuchi model) equations 16.

The animals were housed at 22 ± 2 °C and relative humidity 60 ± 5 % with 12 hour light- dark cycle. Each group was fed with standard commercial laboratory chow (solid) and supplied with purified water ad libitum. The irritant croton oil solution was prepared which consists of 4 parts croton oil, 10 parts ethanol, 20 parts pyridine and 66 parts ethyl ether. 0.02 ml of this irritant croton oil solution was applied on both sides of the right ear followed by the application of formulation and the left ear remains untreated.

The irritant was applied under halothane anaesthesia. The ear thickness was measured before and after the induction of inflammation using a digital Vernier caliper 17.

The drug concentration in dermatological bases was found to be in the range of 100-110 % (Table 3). This reveals that the method used was suitable for preparation of topical dosage forms. As indicated by the value of drug content there was no degradation of the active during the preparation process.

It revealed that all the formulation is stable under stress conditions and varying temperature conditions.

In vitro drug release studies: The drug permeation patterns of all the formulations were presented in Fig.2 In vitro permeation and release were found to be better for silicone base cream as compared to the other dermatological bases. Cumulative % drug permeated after 8 hrs was 7.02% in case of cream (AC 1) while the cumulative amount of drug diffused per unit area is 402.48 µg/cm2   within the same time interval as shown in Fig. 2 (a) & (b).

Enhancement of drug diffusion and permeation of drug through silicone cream base was due to silicone polymers (polydimethylsiloxanes) used in Aceclofenac cream. They are highly permeable to diffusion of various actives due to low intermolecular interactions within silicone molecule 18. Log P octanol/water of Aceclofenac is 8 which indicates that the solubility of non-ionized form of the drug in octanol is much greater than that of the aqueous solutions.

Hence, the great enhancement in penetration of the drug into the skin was observed in case of cream which contained 45% of oil phase. Emulgel showed higher permeation due to presence of non-ionic surfactants like tween 20 and span 85. The two possible mechanisms involved in the enhancement of drug transport by non-ionic surfactants. Initially, the surfactants may penetrate into the intercellular regions of the stratum corneum, increase the fluidity of lipids and eventually solubilize and extract the lipid components. Secondly, penetration of the surfactant into the intracellular matrix followed by interaction with and binding to keratin filaments may result in a disruption within the corneocytes. Emulgel also contains Menthol as a penetrating agent 19.

The in vitro diffusion and in vitro permeation data of all the three formulation were subjected to kinetic analysis study. The selection criteria (R2) and the equations best describing the kinetics of in vitro drug release and in vitro permeation are given in Table 4. The release of the drug from all formulations was found to follow the first-order release kinetics. Higher correlation, as indicated by R2, was observed for the Higuchi matrix release kinetics in all the selected formulations, suggesting diffusion as a probable prominent mechanism of drug release.

Anti-inflammatory activity: Edema can be indicative of inflammation; anti-dermatological activity was evaluated against croton-oil induced dermatitis 6 h after its topical application to the skin of the ear. 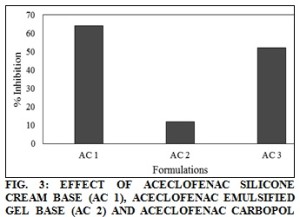 As shown in (fig. 3), topical application of Aceclofenac formulation caused a significant inhibition of croton-oil-induced edema after application to right ear of female Wistar rats. The anti-inflammatory activity of Aceclofenac silicone cream base (AC 1) was found 64% while other formulations have 52% for emulgel (AC 3) and 12% for gel (AC 2) 21.

Also there was no evidence of phase separation, development of disagreeable odor, change in color and consistency of formulation during stability study for three months.

Table 6 and Table 7 shows that formulation of AC 2 and AC 3 of emulgel and gel gives reduction in the drug content and pH which indicate the formulation was not stable after 3 months stability studies.

CONFLICT OF INTEREST: Author declares that we do not have any conflict of interest.