INTRODUCTION: Despite all the considerable improvement in modern medicine, traditional herbal medical profession has always been practiced. Nigella sativa is an annual flowering plant of the (Ranunculaceae family) which is popularly called with different names of black cumin, black seed, the seed of blessing and Habatul-barakah in Arabic countries. The seeds have traditionally been used for thousands of years in the Middle East, Far East and Asia as a food additive and as a herbal health aid 1. Extensive studies were done to identify the composition of the black cumin seed, the ingredients of N. sativa seed includes: fixed oil, proteins, alkaloid, saponin and essential oil.

Most of the pharmacological effects are due to quinine constituent, of which TQ is the mainly abundant. The TQ possess anticonvulsant activity 4, antioxidant 5, anti-inflammatory 6, anti-cancer 7, antibacterial 8 and antifungal activity 9. In recent years huge number of studies have been carried out, acclaimed medicinal properties emphasized on different pharmacological effects of N. sativa seeds such as antioxidant 10, anti-tussive 11, gastroprotective 12, anti-anxiety 13, anti-ulcer  14, antiasthmatic 15, anti-cancer, anti-inflammatory, immunomodulatory and anti-tumor properties 16, hepatoprotective effect 17, also gastric ulcer healing 18, tumor growth suppression 19, men infertility improvement 20, cardiovascular disorders 21, memory improvement 22, stimulate milk production 23, protective effects on lipid peroxidation 24, antibacterial activity 25, anti-dermatophyte 26, antiviral activity against cytomegalovirus 27, have been reported for this medicinal plant. The mechanisms of hepato-protection of N. sativa, and its main constituents, such as thymoquinone are antioxidant and anti-inflammatory properties as illustrated in Table 1.

Cumin (Cuminum cyminum Linn.) with local name of green cumin and white cumin are the closest relative members in this family. The Cumin seeds possess aromatic properties so they are widely used in a variety of cultural foods, condiments, pickles and other baking products as a conventional flavoring agent 28. The C. cyminum seeds contain carbohydrates, proteins, calcium and phosphorus along with Vitamin-A, Vitamin-C and different fractions of various volatile oils 29. C. cyminum have both anti-oxidant and free radical scavenging activities due to the presence of plenty of essential oil 30. Cuminoside A and B (sesquiterpenoid glucosides), two alkyl glycosides as well as five additional well-known constituents are found in C. cyminum 31.

The modern life style and environmental pollution, have been the causes of increased cancer burdens in the world. Chemotherapy is one of the most important methods used in cancer therapy. Cisplatin (CP) is a well-known anticancer drug. It is primarily used as a drug in the treatment of solid tumors. Use of CP in the treatment of tumors is restricted due to its toxic effect on kidney and liver, which can be seen after a single dose of CP in approximately 28 % to 36 % of cancer patients 32. CP is a small molecule which can easily cross the plasma membrane and then to nucleus. In the nucleus, CP causes changes in the structure of the DNA molecule. These changes result from the formation of inter and intra-chain adducts between CP and the nitrogen bases of the DNA 33. Oxidative stress plays the key role in the CP induced hepatotoxicity. Previous studies showed that, the earliest signs of CP induced hepatotoxicity are the fall in the hepatic reduced glutathione (GSH) levels and an increase in the hepatic malondialdehyde (MDA) levels 34. These signs indicate the acceleration of the peroxidative processes in the hepatic cell 35 - 36.

The oxidative stress and production of reactive oxygen species (ROS) such as hydroxyl radicals, superoxide anions, and hydrogen peroxide are normally generated in liver. A detoxification mechanism working in the liver detoxifies the ROS by endogenous antioxidants such as GSH, SOD, and catalase. The accumulation of intracellular ROS leads to an increase in both DNA damage and peroxidation of membrane lipids 35.

Aims and Objectives: Objective of this study is to evaluate the hepatoprotective effect of C. cyminum, N. sativa and silymarin against the toxic effects of cisplatin on albino mice liver.

Chemicals: Cisplatin, 50 mg / 100 ml, was provided from the Research Centre of College of Pharmacy, Al-Qassim University.

Preparation of extract of Nigella sativa: The N. sativa seeds were purchased from a local herb store with a fair degree of quality assurance. Seeds were washed to remove sand and other debris and air dried and finely powdered with an electric microniser according to traditional mode of preparation 37. Crude extract was obtained by the maceration of 800 g of these seeds by boiling in distilled water (1200 mL) for 24 h and filtered through muslin 38 and each 1 mL of the extract will contain 0.6 g of N. sativa. After 24 h, the aqueous extract was filtered and concentrated at room temperature, then the dried extract was stored at 4°C until use 39.

Preparation of Crude Extract of Cuminum cyminum: Dried C. cyminum seeds were purchased from a local herb store with a fair degree of quality assurance. Completely dried material was then ground to coarse powder by using electric grinder. 1000 g of ground powder was macerated in 2 L of 70 % aqueous ethanol for five days. Soaked material was thoroughly stirred thrice daily. At the end of 5th day of maceration, it was filtered through muslin cloth and then through Whatmannn filters paper No. 1. Residue was again macerated to obtain more filtrate. This was repeated thrice and filtrate obtained after three soakings was evaporated by using rotary evaporator at 30 - 40 °C.

Animals and Experimental: Albino mice of either sex weighing 30-35 g were used in the experiment. All of the animals were kept in animal house of university at 25 °C with 12 hours light-dark cycle. Animals were divided into 5 groups with 2 mice in each group at Al-Qassim University, Kingdom of Saudi Arabia after IRB approval by using 6 mice in a group. Chow and water were provided.

Group I served as negative control and were administered vehicle only. Group II received single dose of cisplatin intraperitoneally and tagged as positive control. Group III was administered with extract of C. cyminum 250 mg/kg orally for 14 days. Group IV was administered with extract of N sativa 250 mg/kg orally for 14 days. Group V is silymarin 250 mg/kg orally for 14 days.  On 15th day, cisplatin, 10 mg/kg, was injected i.p in group III, IV and V. Group V is our positive control.  Animals were sacrificed and liver was isolated after blood collection by cardiac puncture. Serum was separated after centrifugation at 3000 rpm for 10 min. Liver was preserved in 10% formalin for histopathalogical examination. Its homogenates were prepared which were further utilized for the assessment of biochemical markers and tests.

Preparation of Homogenates: Tissue homogenate were prepared in phosphate buffer saline (pH 7.4). After crushing, the mixture was centrifuged at 4000 rpm for 15 minutes. Supernatant was separated and stored at -20 °C till the for biochemical analysis.

Principle: Liver GSH was estimated according to the method of Moron et al., GSH reacts with Ellman’s reagent (5, 5-dithio bis Nitrobenzoic acid or DTNB) to produce a chromophore Thio Nitrobenzoic acid (TNB) that give maximal absorbance at 412 nm. Absorbance value can give the estimation of enzyme value.

Principle: Catalase enzyme degrades hydrogen peroxide (H2O2) into oxygen and water. Ultraviolet absorption of H2O2 can be measured at 240 nm. In the presence of catalase, absorption decreases due to degradation of H2O2.

Principle: Malondialdehyde (MDA) is the end product of lipid peroxidation. They are produced as a result of breakdown of polyunsaturated fatty acids. This compound is a reactive aldehyde and is one of the many reactive electrophile species that cause toxic stress in cells and form covalent protein adducts referred to as advanced lipoxidation end- products (ALE), in analogy to advanced glycation end-products (AGE). The production of this aldehyde is used as a biomarker to measure the level of oxidative stress in an organism. Malondialdehyde reacts with deoxyadenosine and deoxyguanosine in DNA, forming DNA adducts. MDA reacts with TBA to produce pink colored end product having maximum absorption at 532 nm.

Procedure: Lipid peroxidation was estimated calorimetrically by measuring Thiobarbituric acid reactive substances (TBARS). To 0.2 ml of tissue homogenate, 0.2 ml of 8.1% Sodium dodecyl sulfate (SDS), 1.5 ml of 20% acetic acid and 1.5ml thiobarbituric acid (0.8%) and 0.6 ml of distilled water were added and vortexed. The solution was incubated in water bath at 95 °C for 1 hour.

After that mixture was cooled and 5 ml of pyridine butanol mixture (1:15 v/v) and 1 ml distilled water were added and centrifuged for 10 minutes at 3000 rpm. The upper organic layer was taken and its optical density was measured at 532 nm against blank. The standard solution was prepared using 10-100 nmol concentration. Level of MDA in the reaction was calculated using linear regression equation. The levels of lipid peroxides were expressed as nmol of Thiobarbituric acid reactive substances (TBARS)/g protein.

Principle: This assay is based on the formation of formazan resulting from the reaction of NADH, Phenazine methosulphate and nitro blue tetrazolium. A blue colored formazan is developed by the reduction of NBT during this reaction. SOD inhibits the reduction of NBT. The colour is extracted into butanol and measured at 560 nm.

After incubation at 30 °C for 90 sec, the reaction was stopped by the addition of 0.1 ml of glacial acetic acid.

The reaction mixture was stirred vigorously with 4.0 ml of n-butanol. The mixture was allowed to stand for 10 min; centrifuged and nbutanol layer was separated. The color intensity of choromogen in butanol layer was measured at 560 nm reagent blank. Standard curve was constructed for SOD using 10-100 μl concentration. Tissue activity if SOD was measured using linear regression equation. Concentration of SOD was expressed in unit/gram of liver tissue.

Histopathology: Liver sections were dehydrated in ethanol, cleared in xylene and then fixed in paraffin. 4 - 5 µm sections were cut to prepare slides and hematoxylin and eosin dye was used for staining slides 45.

Statistical Analysis: Values were expressed as mean ± SD. When compared with toxicant control group. One way (ANOVA) analysis of variance was used followed by Dunnetts test to determine the difference between groups in terms of all studied parameters using SPSS computer program. Differences were considered significant when value of P is less than 0.05.

RESULTS: To evaluate the liver function of mice before and after the treatment strategies alanine transaminase (ALT), aspartate transaminase (AST), alkaline phosphatase (ALP) and total protein (TP) tests were performed. As per Table 2, the level of liver enzymes was elevated and total protein (TP) was decreased after the administration of Cisplatin (10 mg/kg) in group II. The level of these enzymes was decreased and protein content was increased in group III, IV and V treated with C. cyminum (200 mg/kg) and N. sativa (200 mg/kg) and silymarin (200 mg/kg). 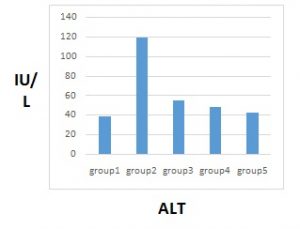 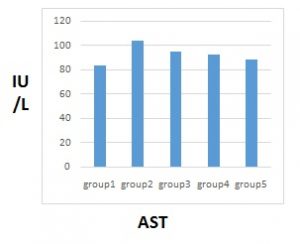 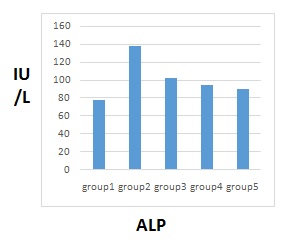 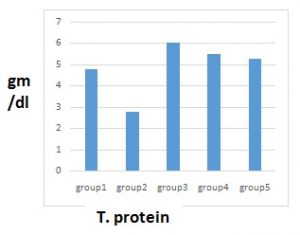 As per Table 3, level of antioxidant enzymes (GSH, CAT and SOD) was decreased after the administration of cisplatin (10 mg/kg), while MDA level was increased due to the hepatotoxic effects of cisplatin on liver. Level of antioxidant enzymes was significantly increased and MDA level was decreased in group III, IV and V. Better antioxidant and hepatoprotective effect was observed in animal groups treated with N. Sativa (200 mg/kg) than C. cyminum (200 mg/kg). 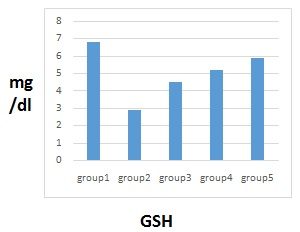 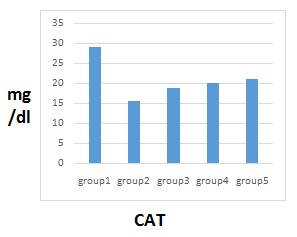 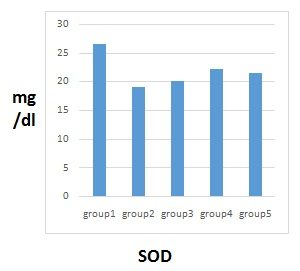 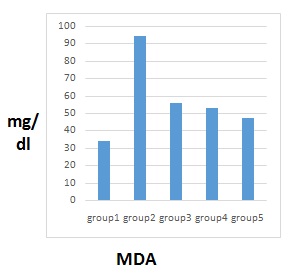 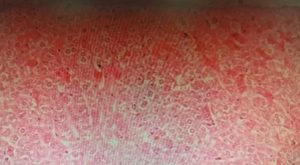 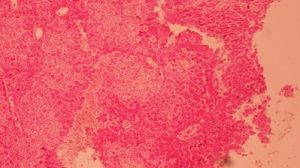 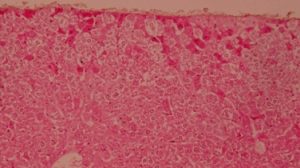 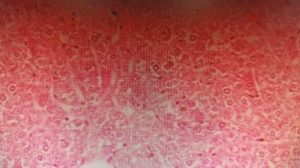 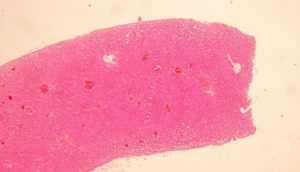 DISCUSSION: Cisplatin is a cytotoxic drug used against various types of cancers. This drug may also cause much toxicity inside the different organs of body including heart, kidneys and liver 47, 48. In the present study application of cisplatin at 10 mg/kg induced the hepatotoxicity in the mice which was supported by biochemical findings i.e. increase in the ALT, AST, ALP and total protein contents (TP) and decrease in the antioxidant enzymes (SOD, Catalase, GSH and MDA). Various studies have also supported that treatment of rats with cisplatin induced changes in the ALT and AST by damaging hepatocytes. Cisplatin induced oxidative stress also contribute to damage the liver cells. Some studies have shown that repeated administration of cisplatin at high dose reduces the level of antioxidant enzymes. Cisplatin administration also elevated the level of MDA, which caused the hepatic cell damage.

In the present study treatment of mice with C. cyminum extract and N. Sativa prevented the hepatic cell damage by increasing the liver function test parameters and by also remarkably decreasing the MDA level and increasing the level of antioxidant enzymes i.e. catalase, superoxide dismutase and glutathione. The healing of hepatic cells is due to the tissue regeneration property present in both C. cyminum and N. sativa.