Aim: To compare the immunomodulatory effect of Ocimum sanctum and Ocimum basilicum in mice.

Result: Administration of Ocimum sanctum and Ocimum basilicum did not produced any mortality or any signs of behavioral changes or toxicity at the dose level of 2000 mg/kg body weight in mice. The result of the present study showed that acute administration of extract of Ocimum sanctum and Ocimum basilicum may be safe as the LD50 may be greater than 2000mg/kg. Treatment with Ocimum sanctum enhanced DTH reaction, which is reflected from foot pad thickness when compared with Ocimum basilicum and control groups whereas a similar effect was observed when compared to the reference drug Aswagandha choorna, which is a well-known immune booster.

INTRODUCTION:  Plant and plant products are being used as a source of medicine since long. The medicinal properties of plants have been investigated in the recent scientific developments throughout the world, due to their potent antioxidant activities, no side effects and economic viability 1.

Flavonoids and phenolic compounds widely distributed in plants which have been reported to exert multiple biological effects, including antioxidant, free radical scavenging abilities, anti-inflammatory, and anti- carcinogenic etc 2.  They were also suggested to be a potential iron chelator 3, 4.

Novel natural antioxidants from some plants have been extensively studied in the past few years for their antioxidant and radical scavenging properties. Medicinal plants have been used for centuries and have become part of complementary medicine worldwide because of their potential health benefits.

In India, earliest references are available in Rigveda which is said to be written between 3500 – 1600 B.C. 5. Plant metabolites are known to have direct positive effects in the treatment and management of infectious diseases and cancer. In addition, the indirect effects of plant metabolites through immunomodulation are well studied 6.

The medicinal plants are rich in secondary metabolites and essential oils of therapeutic importance7. Plants as a therapeutic option were achieving significance due to their safety profile besides being economical, effective and easily available. Plants play an essential role in the health care needs for the treatment of diseases and to improve the immunological response against much pathology 8. Plant extracts have been proved for its activity in boosting the humoral 9 and cell mediated immunity 10 against viruses 11, bacteria 12, fungi 13 protozoa 14 and cancer 15.

The immune system is a very complex and regulated organ system that involves the cooperation and interaction of a number of different cell types, cell products, tissues, and organs. Immunomodulator has been defined as a substance, biological or synthetic which can stimulate, suppress or modulate any of the components of immune system including both innate and adaptive arms of the immune response16. Immunomodulators are being used as an adjuvant in conditions of immunodeficiency in cancer and other immunodeficiency syndrome.

Immunostimulants, also known as immunostimulators, are substances (drugs and nutrients) that stimulate the immune system by inducing activation or increasing activity of any of its components.

The present study was undertaken to scientifically validate the immunostimulatory activity of Ocimum sanctum and Ocimum basilicum in mice of immunostimulant screening.

Chemicals: All the chemicals were obtained from Sigma, St. Louis, MO.

Plant Material: The leaves of both varieties of Ocimum sanctum and Ocimum basilicum were collected from Tirunelveli and Kanyakumari district. The samples were authenticated, and specimens were deposited in Arvind Remedies LTD. The samples were dried in shade, stored at 25°C in air tight containers, and powdered to 40 mesh whenever required.

Extraction of Plant Material: The shade dried leaves of Ocimum sanctum and Ocimum basilicum were weighed and extracted with methanol in a Soxhlet apparatus. The extraction was done for 72 hours. The extract was then concentrated under vacuum in a rotary evaporator and dried extracts are stored in desiccators for future use.

The animals were observed intensively for first 24 hours following Ocimum sanctum and Ocimum basilicum administration and 14 days for any signs of behavioral changes, mortality and body weight (OECD 423).

Delayed Type Hypersensitivity Reaction: All the animals were immunized by intraperitoneal administration of 0.2ml of 10%SRBCs/mice on 15th day and challenged by s.c. administration of 0.025ml of 1×109 SRBCS/ml into right hind foot pad on day 1918. DTH response was measured at 24 and 48 h after SRBCs challenge and expressed as mean percent increase in paw volume by using Plethysmometer.

Neutrophil Adhesion Test: Animals were pretreated for a period of two weeks and on the 14th day of the treatment, blood samples from all the groups were collected by puncturing retro-orbital plexus under mild ether anaesthesia. Blood was collected in vials containing disodium EDTA and analyzed for total leukocyte count (TLC) and differential leukocyte count (DLC) by fixing blood smears and staining with Leishman’s stain. After initial counts, blood samples were incubated with nylon fiber (80 mg/ml of blood sample) for 15 min at 37oC. The incubated blood samples were again analyzed for TLC and DLC. The product of TLC and % neutrophil gives neutrophil index (NI) of blood sample. Percent neutrophil adhesion was calculated as follows 19,

TABLE 1.1: EFFECT OF OCIMUM SANCTUM AND OCIMUM BASILICUM ON BODY WEIGHT OF MICE

Values are expressed in mean±SEM 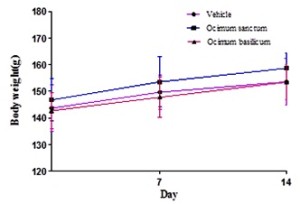 FIGURE 1: EFFECT OF OCIMUM SANCTUM AND OCIMUM BASILICUM ON BODY WEIGHT OF MICE

Now-a-days many of the disorders are due to the imbalances of immunological processes like Delayed type hypersensitivity (cell mediated) reactions and humoral responses 21. Delayed type hypersensitivity is a part of the process of graft rejection, tumor immunity and most important immunity to many intracellular infectious micro-organisms, especially those causing chronic diseases viz tuberculosis 22. Cell-mediated immunity (CMI) involves effector mechanisms carried out by T lymphocytes and their products (lymphokines) 23.

DTH requires the specific recognition of a given antigen by activated T lymphocytes, which subsequently proliferate and release cytokines. Delayed type hypersensitivity reaction is characterized by large influxes of non-specific inflammatory cells, in which the macrophage is a major participant. It is a type IV hypersensitivity reaction that develops when antigen activates sensitized TDTH cells. These cells generally appear to be a TH1 subpopulation although sometimes TC cells are also involved.

Activation of TDTH cells by antigen presented through appropriate antigen presenting cells results in the secretion of various cytokines including interleukin-2, interferon-γ, macrophage migration inhibition factor and tumor necrosis factor 24. The overall effects of these cytokines are to recruit macrophages into the area and activate them, promoting increased phagocytic activity vis-a-vis increased concentration of lytic enzymes for more effective killing.

Several lines of evidence suggest that DTH reaction is important in host defense against parasites and bacteria that can live and proliferate intracellularly. The interaction of sensitized T-cells, with antigen presenting cell, results to the release of cellular mediators, such as histamine, initiation of arachidonic acid metabolism 25 and eventually to interferon-g that will lead to DTH reaction. Several inflammatory processes have been suggested as regard these possible mechanisms. For example, activation of complements, releasing of mediators by activated mast cells, kinin, reactive oxygen or nitrogen species from archidonic acid metabolites and pro-inflammatory cytokines 26.

When activated, TH1 cells encounter certain antigens, viz. SRBCs. They secrete cytokines that induce a localized inflammatory reaction called delayed type hypersensitivity 27. DTH comprises of two phases, an initial sensitization phase after the primary contact with SRBC antigen. During this period TH1 cells are activated and clonally expanded by APC (antigen presenting cells) with class II MHC molecule (e.g. Langerhans cells and macrophages are APC involved in DTH response). A subsequent exposure to the SRBCs antigen induces the effector phase of the DTH response, where TH1 cells secrete a variety of cytokines that recruits and activates macrophages and other non-specific inflammatory mediators. 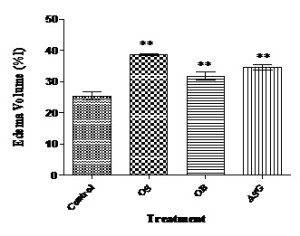 The delay in the onset of the response reflects the time required for the cytokines to induce the recruitment and activation of macrophages 28. The infiltrating cells are thus immobilized to promote defensive (inflammatory) reaction. Treatment with O. sanctum enhanced DTH reaction, which is reflected from the increased footpad thickness when compared to control group suggesting heightened infiltration of macrophages to the inflammatory site. This study may be supporting a possible role of O. sanctum in assisting cell-mediated immune response.

Cytokines are secreted by activated immune cells for margination and extravasation of the phagocytes mainly polymorphonuclear neutrophils. Significantly evoked increase in the adhesion of neutrophils to nylon fibres indicates the margination of cells in the blood vessels and the number of neutrophils reaching the site of inflammation.

Hence, it can be inferred that the proposed herb has potent immunomodulatory effect. In innate immunity neutrophils were considered as a multi-functional cell types that contribute to bacterial clearance by recognition, phagocytosis and killing whereas leucocytes are responsible for the production of antibodies leading to enhancement of immunity 29.

Further, these Neutrophils contain a variety of toxic substances which are involved in effective killing or inhibiting the growth of bacteria, fungi. The mediators of this cell will be increased only when the immune system is stimulated. Therefore, the TLC and DLC count analyzed gives the effective involvement of neutrophils in immunity.

On the other hand, macrophages are poly-morphonuclear lymphocytes that play an important role in the modulation of immune system. These cells then secrete number of cytokines likes CSF and IL-1 which in turn stimulates neutrophils and increases neutrophil index 30. This gives host defense the ability to counter the infectious diseases.

Our results demonstrated that the rise in neutrophil index as shown by enhanced adhesion of neutrophil to nylon fiber further suggests that O. sanctum may be useful in promoting the protection of body by phagocytosis, even in diseased conditions where immunity is depressed.