ABSTRACT: The elimination capacity of pristine powder activated charcoal PAC and powder activated charcoal modified with potassium permanganate MPAC to remove levocetirizine drug was investigated. The activated charcoal was impregnated with KMnO4 100 mg/L in order to improve the surface properties. The influence of concentration, time and pH on the adsorption of levocetirizine drug was conducted by means of UV-Vis spectroscopy. The experiments were carried out using two lines. Line 1; adsorption of the drug on pristine PAC and line 2; adsorption on MPAC. By batch experiments, the effect of levocetirizine concentrations of 25, 50, 75, and 100 mg/L, a reaction time of 15, 30, 45 and 60 min, and pH of 2, 4, 7 and 9 were investigated. The results showed that elimination capacity of both PAC and MPAC increased with increasing the drug concentration and time of contact and decreased with decreasing the pH. The elimination efficiency of MPAC found to be greater than that of PAC.

INTRODUCTION: Activated charcoal is one of the main effective adsorbents which has a high surface area, large pore volume, tunable pore size, chemical stability and high hydrophobicity 1, 2, 3. It is in the shape of a fine black odorless, tasteless, microcrystalline powder 4. Due to its high adsorptive capacity is used as an adsorbent for a large variety of compounds. It is used for removal of colors from solutions 5, 6. Activated charcoal is used in the adsorption of gases and vapors such as ammonia, carbon tetrachloride, methane, nitrogen dioxide and carbon dioxide 7, 8, 9. A large number of studies concern the adsorption of a verity of organic compounds on activated charcoal have been conducted.

From these studies adsorption of phenol, diethyl phthalate, dibutyl phthalate and many other compounds 10, 11, 12. In the pharmaceutical field, activated charcoal has been used as an antidote for the majority of poisons because of its ability to prevent the absorption of many toxic agents and enhance the removal of many absorbed drugs. It is used as an antiflatulent, and as a good treatment to reduce blood lipid concentrations in patients having uremia and diabetes 13, adsorption of odors from wounds 14.

Activated charcoal has been used as an adsorbent for a wide range of different drugs like paracetamol 15, tramadol hydrochloride 16, diazepam 17, acetaminophen 18 and many others. In recent years, many researchers have dedicated to research on modification of activated charcoal to improve the adsorption capacity 19, 20, 21, 22. One of the important methods is to oxidize the structure by oxidizing agents 23, 24. Oxidization with ozone 25, concentrated nitric acid 26, 27 and hydrogen peroxide 28 can enhance the adsorption of functional groups of carboxylic acids and some other organic compounds. It was found that oxidizing the structure of activated charcoal change its inert and hydrophobic nature and enhance the wettability for polar solvents 29.

The wavelength at which maximum absorbance occurs (λmax) was recorded for the aqueous solutions of drug and found to be 230 nm.

Modification Method of Activated Charcoal: Modification of activated charcoal was conducted by immersing the powder in a solution of potassium permanganate 100 mg/L under a neutral condition for 4 h with slow stirring. The mixture then separated and washed repeatedly with distilled water to no color and dried to constant weight at 105 ºC for 4 h in order to remove the content of impregnation solvent and water.

The flask containing 50 ml of levocetirizine solution of concentrations 25, 50, 75 and 100 mg/L were shaken with 0.5 gm activated charcoal for 1 hour for concentration study.

For pH study, 50 ml of drug solution 100 mg/L were shaken with 0.5 gram of activated charcoal for 1 h at pH of 2, 4, 7 and 9. The mixtures were shaken vigorously at room temperature on magnetic stirrer after which filtered through filter paper and the filtrate solutions were analyzed spectrophotometrically at λ = 230 for residual drug concentration. The process was repeated for PAC and MPAC under different equilibrium conditions of concentration, time and pH. The pH was adjusted using 0.1 N solutions of HCl and NaOH.

The amount of the drug adsorbed was calculated using the equation:

RESULTS AND DISCUSSION: Levocetirizine is a selective H1-antihistamine drug used for the treatment of allergic rhinitis and chronic idiopathic urticaria. It is an off-white crystalline powder soluble in water. The chemical formula is C21H25ClN2O3. It is the R-enantiomer of racemic cetirizine. The chemical name of the drug is 2-[2-[4-[(R)-(4-chlorophenyl)-phenyl methyl] pipera-zinyl-1-yl]ethoxy] acetic acid 43, 44.

FIG. 1: THE CHEMICAL STRUCTURE OF LEVOCETIRIZINE

The results of concentration for both PAC and MPAC study are listed in Table 1. 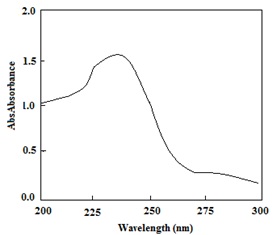 FIG. 2: THE UV SPECTRUM OF LEVOCETIRIZINE

To simulate the adsorption process in the environment of the gastric fluid a sample was used with its additives.

It is clear from Table 1 that the amounts of the adsorbed drug in mg for each gm of both PAC and MPAC increases almost steadily with increased concentration of the drug solution. At the same time, it seems clear that MPAC adsorbs larger amounts than PAC. The amounts of 4.7 and 4.9 mg of the levocetirizine adsorbed on 1 gm PAC and MPAC respectively in the 100 mg/L concentration seem reasonable.

Fig. 3 is a plot of the amounts of the drug adsorbed on activated charcoal in mg/gm versus concentration for concentration study. The steady increscent in the amount of the levocetirizine drug adsorption on PAC and MPAC is very obvious from the plot.

The parameters for time study are listed in Table 2. When the time duration of the reaction was changed from 15, 30, 45 to 60 min, the amounts of the drug adsorbed increased with increasing the time for both PAC and MPAC. This time incensement gives the indication that the time of contact is also an important factor for the elimination of the drug. Again the adsorption rate of MPAC was greater that of PAC. The enhancement of adsorption when MPAC is used is very obvious. The relationship between time and the amounts of the adsorbed drug is shown in Fig 4. The steady increscent of the adsorption with increasing time is clear.

Table 3 contains the parameters for pH study. The amounts of the levocetirizine in mg adsorbed on 1gm activated charcoal increasing as the pH of the solution decreased. The highest values of 5.4 and 6.6 mg/gm for the PAC and MPAC respectively found at pH 2, which seems a good result since the pH of the gastric fluid in this rang. The relationship between the pH and the amounts of the adsorbed drug gave a straight line as shown in Fig 5. Only the value at pH 7 for the PAC showed deviation from the straight line.

From the parameters of the three factors, it is quite clear that the elimination of the levocetirizine drug from the solutions depends on concentration, time and pH. Modification of the activated charcoal by potassium permanganate enhance its elimination capacity in all the experiments factors used.

The enhancement capacity reaches 63% for the 25% concentration as is evident from Table 4. A quick glance at the table reveals that the MPAC adsorption capacity was enhanced by about 30% in general. 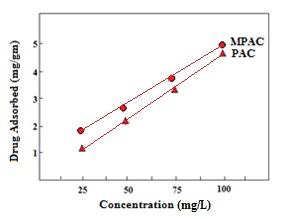