INTRODUCTION: Inflammatory bowel disease (IBD) was defined as a group of disorders that cause chronic inflammation (pain and swelling) in the intestines. IBD included crohn’s disease and ulcerative colitis. The exact cause of IBD was unknown, but it is believed to be the result of a defective immune system.

To protect the body, a properly functioning immune system attacks foreign organisms, such as viruses and bacteria. In IBD, the immune system responds incorrectly to environmental triggers, which causes inflammation of the gastrointestinal tract.

There also appeared to be a genetic component; someone with a family history of IBD was more likely to develop this inappropriate immune response. Drugs used for treating inflammatory bowel disease were known to have a number of adverse effects. Sulfasalazine had side effects like fatigue, nausea, abdominal pain and diarrhoea. Glucocorticoids induced peptic ulcers and upper gastrointestinal bleeding when given in combination with NSAIDs. Thioguanine caused severe gastrointestinal side effects, including gastrointestinal complaints, hepatotoxicity, and pancreatitis. Nodular regenerative hyperplasia (NRH) is an important side effect of thiopurine therapy, especially in men with Crohn's disease after ileocecal resection, which may finally result in portal hypertension. A major concern of methotrexate therapy in IBD besides myelosuppression and pulmonary fibrosis is hepatotoxicity. Besides renal dysfunction, tremor, hirsutism, hypertension, and gum hyperplasia. Cyclosporine may cause diarrhoea nausea, vomiting, and hepatotoxicity 1.

Biological agents such as infliximab, adalimumab, certolizumab, natalizumab and or those that have extended the therapeutic management of inflammatory bowel disease but these drugs also have a number of side effects which includes opportunistic infections, malignancies, and miscellaneous complications like injection/infusion reactions and autoimmunity and contra-indications, such as heart failure and acute infectious diseases 2.

The worldwide trend towards utilizing natural plant remedies has created an enormous need for information about the properties and uses of medicinal plants. The Indian Traditional Medicine like Ayurvedic, Siddha and Unani are predominantly based on the use of plant materials. Herbal drugs have gained importance and popularity in recent years because of their safety, efficacy, and cost-effectiveness. Murraya koenigii, also called a curry leaf, is a deciduous aromatic shrub with a strong smell growing up to 3-5 m tall with a trunk up to 40 cm in diameter. The aromatic leaves are pinnate with 15-25 leaflets, each leaflet about 2-4cm long and 1-2 cm broad. The flowers are small, white, and fragrant, which produce small shiny-black berries containing a single, large viable seed that turns purplish-black when ripe 3, 4, 5. Murraya koenigii has numerous medicinal properties. The extract of leaves, roots, and bark can induce digestion, flatulence, or as an antiemetic. The decoction of leaves helps reduce fever. Root juice is used for renal pains. The leaves and roots can be anthelmintic, analgesic, cure for piles, and reduce inflammation and itching. Raw green leaf juice is used to cure dysentery, and the paste prepared by boiling with milk has good application prospects for curing poisonous bites 6, 7, 8. Centella asiatica (CA) is a clonal, perennial herbaceous creeper that belongs to the family Umbelliferae (Apiaceae) and is found throughout India, mainly in moist places up to an altitude of 1800 m. It is a tasteless and odourless plant that thrives in and around water. It has small fan-shaped green leaves with white or light purple-to-pink or white flowers 4, 9, 10, 11. The whole plant is used for medicinal purposes. It is mainly used as a blood purifier, treating high blood pressure, enhancing memory and promoting longevity, revitalizing the nerves and brain cells, wound healing, antimicrobial, cytotoxic and antioxidant property 12, 13, 14.

Several drugs are available to treat inflammatory bowel disease, but these drugs have shown the incidence of adverse effects, drug interaction, and relapses during clinical evaluation. The search for the most appropriate drug to manage this condition continues and has also been extended to herbal drugs searching for new and novel molecules because of their minimal side effects and cost-effectiveness. The study aims to perform a comparative evaluation between different concentrations of Centella asiatica and Murraya koenigii in acetic acid-induced inflammatory bowel disease in albino rats.

Collection of Plant Material: The two plants species Centella asiatica and Murraya koenigii used in the study were purchased from the local market. The plant specimen was identified and authenticated in the Department of Pharmacognosy of NIPS, Mirza. The aerial part of the Murraya koenigii and Centella asiatica was dried in the shade and crushed to fine powder separately. The extraction of the plant was done with ethanol by using the Soxhlet apparatus. The extract was then cooled, dried, and concentrated. The dried extract was dissolved in saline before use.

Animal Husbandry and Maintenance: 45 numbers of healthy adult Swiss strain albino rats (weighing 210-250 g, aged between 5-8 weeks, of either sex) were obtained from the certified vendor and housed at the animal house facility of NIPS, Mirza. The animals were placed in polypropylene cages with free access to a standard laboratory diet (Pranav Agro Industries limited, Sangli, Maharastra, India) and provided water ad libitum. Each individual animal was clinically examined upon arrival.

Animals were grouped and housed in an environ-mentally-controlled room with a temperature of 22 ± 3 °C and 40-70 % relative humidity with a 12-hr light/dark cycle and ventilation of 15-21 air changes / h for an acclimatization period of 7 days to laboratory conditions before the beginning of the experiment to adjust the new environment and to overcome stress incurred during their transit. Only healthy animals were assigned for study 15.

Ethical Review: The study was undertaken with due approval from the Institutional Animal Ethics Committee bearing the approval number: 11/GMCH/CPCSEA/351.

Both the extract were found to be non-toxic and suitable for further study and caused no mortality up to the dose of 200 mg/kg 14.

Induction of Colitis: Colitis was induced in the experimental animals using acetic acid at a 4% v/v. After 5 days of feeding, colitis was induced in the experimental animal groups II, III, IVa, IVb, IVc, Va, Vb and Vc by transrectal administration of 1ml of 4% acetic acid under low dose ether anaesthesia after overnight fasting. Animals were maintained in head-down position for 30 seconds to prevent leakage. Colitis was assessed after 48 hours of induction.

Assessment of Colon Weight-to-Length Ratio: Rats were euthanized on day 8 by cervical dislocation under anaesthesia with 50 mg/kg pentobarbitone (i.p.). Rats were dissected, and their colons were dissected out, opened longitudinally, and rinsed gently under running water to remove the faeces. Colons were placed on nonabsorbent surfaces, and weight-to-length ratios were blindly assessed.

Macroscopic Assessment of Colonic Damage: Macroscopically visible injuries such as thickening, shortening, hyperemia, and necrosis were blindly scored from 0-100% based on increasing order of severity as described by Ballester et al. 16 and Motavallian-Naeini et al 17.

Microscopic Assessment of Colonic Damage: Samples of the distal colons were fixed immediately in 10% formaldehyde, embedded in liquid paraffin, cut into transverse sections of 5 μm thick using Microtome (Leica Biosystems), and then mounted on glass slides and stained with haematoxylin and eosin (H&E).

The scoring of induced colitis was determined by examining each specimen for the following features and allocating increasing points according to the severity of the findings:

Assessment of Antioxidant Enzymes in the Colon: Colons were homogenized using a glass tissue homogenizer (Dounce Tissue Grinder) on ice-cold Tris-HCl buffer (0.01 M, pH7.4) to give a 10% homogenate which was used for assays of superoxide dismutase activity in the colons as described below.

Superoxide Dismutase (SOD): Activity of SOD in the colon was determined as described by Misra and Fridovich (1972) with a slight modification. Briefly, 750 μl ethanol (96% v/v) and 150 μl of ice-cold chloroform were added to 500 μl of the tissue homogenate and centrifuged at 2000 rpm for 20 min at 25°C. To 500 μl of the supernatant, 500 μl EDTA (0.6mM) and 1 ml carbonate bicarbonate buffer (0.1 M, pH10.2) were added. The reaction was initiated by the addition of 50 μl of adrenaline (1.3 mM). Absorbance was measured against a blank conc. at 480 nm using Shimadzu ultraviolet-visible spectrophotometer.

Percentage inhibition of autoxidation of adrenaline was calculated using the formula: 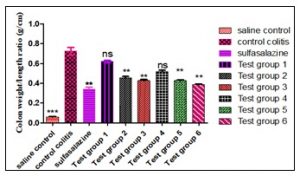 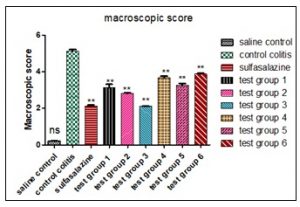 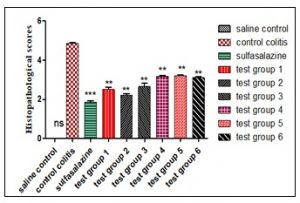 Effect of Ethanolic Extract of Centella asiatica and Murraya koenigii on Activity of Superoxide Dismutase on Colons of Acetic acid-induced Colitis Rats: 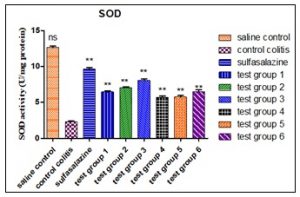 DISCUSSION: The induction of ulcerative colitis by a low concentration of acetic acid was a well-recognized model for the study of inflammatory bowel disease. Although the animal model might vary from human inflammatory bowel disease aetiologically, their pathophysiology and drug sensitivity were similar to humans. Some common colonic changes included ulceration of the mucosal layer, loss of weight, hemorrhage, rupture of colonic barrier, the release of inflammatory mediators like cytokines, arachidonic acid metabolites.

In the above study, it was observed that administration of acetic acid by intrarectal route significantly increased rats' colon weight/length ratio. This might be due to severe tissue oedema, necrosis, goblet cell hyperplasia, and inflammatory cell infiltration. Further, the macroscopic study of the intestinal content of animal treated with extract of Centella asiatica and Murraya koenigii showed that they had reduced leucocyte infiltration, dramatically attenuated histopathological alterations, and exerted anti-inflammatory and anticolitic effects 18. The extract inhibited the excessive loss of blood, which indicated the therapeutic success of potential antiulcerative agents 19. Histopathological assessment revealed that treatment of rats with the extract of Centella asiatica and Murraya koenigii preserved the entire colonic mucosa and inhibited inflammatory cell infiltration, ulceration, erosions, necrosis, and hyperplasia caused by acetic acid when compared with acetic acid-induced colitis rats. This parameter indicated that the plant extract can protect the animal from inflammatory bowel disease.

It was also seen that in healthy rats, superoxide dismutase (SOD) played an important role of protective antioxidant enzymes. In ulcerative colitis, levels of SOD in colonic tissues become exhausted as a consequence of oxidative damage caused by the generation of free radicals. SOD protects the cells against ulcerative damage by mediating dismutation of superoxide anion and preventing lipid peroxidation. SOD also prevents leukocyte rolling and adhesion in colonic tissues 20.

CONCLUSION: The present study's findings demonstrated the preventive ability of the extract of Centella asiatica and Murraya koenigii against acetic acid induced inflammatory bowel disease in Swiss albino rats, which suggested being a potentially effective therapeutic candidate for the treatment of UC.

It was also observed that the activity of SOD in the colons was increased. By comparing the above parameters, we can conclude that the extract of Centella asiatica is more effective in treating inflammatory bowel disease than Murraya koenigii. The results may be useful in future clinical trials of Centella asiatica leaves or its bioactive constituents as natural, safe, and effective treatment of patients with inflammatory bowel disease.

CONFLICT OF INTEREST: All the authors declare that they have no conflict of interest.