ABSTRACT: Background: Vitamin D3 deficiency continues to be an unrecognized epidemic in many populations around the world. Vitamin D is important for the absorption of calcium, and bone formation and maintenance. Objective: This study was carried out with an objective of evaluating the prevalence of low Vitamin D levels (insufficiency and deficiency) in female office workers and housewife’s in Geetanjali medical college and hospital, Udaipur. Material & method: This study was carried out in Geetanjali hospital and medical college, a retrospective study conducted on 50 working and 50 housewife’s subjects between age group 18-32 years.  Body mass index (BMI) was calculated. Serum calcium, serum phosphorous, and alkaline phosphatase were determined by a fully-auto-analyzer. The serum level of Vitamin D3 was measured using the electro chemiluminescence immunoassay methodology. Results:  The difference in the BMI between the office workers and housewife’s was statistically no significant. Vitamin D3 was 18.72 ± 6.97ng/ml (SEM0.987) in office worker’s and 9.94 ± 6.14 ng/ml (SEM 0.869) in housewife’s with a highly significant (p<0.0001) statistical difference. Conclusion:  In all subjects there were low vitamin D3 levels found. An urgent awareness with treatment of this deficiency must be undertaken to prevent any future consequences of   Vitamin D deficiency in these young healthy females

INTRODUCTION: In the liver, cholecalciferol (Vitamin D3) is converted to calcidiol, which is also known as calcifediol (INN), 25-hydroxy cholecalciferol, or 25-hydroxyvitamin D3 — abbreviated 25(OH)D3.  Ergocalciferol  (Vitamin D2) is converted in the liver to 25-hydroxy ergocalciferol, also known as 25-hydroxyvitamin D2 — abbreviated 25(OH) D2. These two specific vitamin D metabolites are measured in serum to determine a person's Vitamin D status.1, 2 One of the most important roles of Vitamin D is to maintain skeletal calcium balance by promoting calcium absorption in the intestines, promoting bone resorption by increasing osteoclast number, maintaining calcium and phosphate levels for bone formation, and allowing proper functioning of parathyroid hormone to maintain serum calcium levels.

Vitamin D deficiency can result in lower bone mineral density and an increased risk of reduced bone density (osteoporosis) or bone fracture  because a lack of Vitamin D alters mineral metabolism in the body.3 Vitamin D deficiency continues to be an unrecognized epidemic in many populations around the world. 4

It is generally agreed that the evaluation of the status of Vitamin D should be performed through the measurement of 25-hydroxy Vitamin D (25OHD) levels, though what constitutes a normal level of Vitamin D remains controversial. 5 The deficiency is prevalent not only in females or the elderly but also in free-living healthy young male adults. 6 It has been reported in healthy children, young adults, middle-aged adults, and the elderly, and is common among both males and females. The 25OHD concentration was found recently to be an independent determinant of peak bone mass.7 Importantly, Lips et al. 8 and Heaney 9 concluded that adequate Vitamin D levels can prevent osteoporosis-related hip fractures. As expected, owing to lower Vitamin D levels, females were found to have significantly lower serum calcium and higher mean PTH levels, possibly as part of an early secondary hyperparathyroidism leading to significantly lower serum phosphorus.10 The lower level of alkaline phosphatase in females is possibly related to the use of oral contraceptive pills.11

In view of aforementioned controversial literature, we were aimed to evaluate the vitamin D3 status in young working women and housewives in Udaipur region.

This study was carried out in Geetanjali hospital and medical college. This was a retrospective study. Which were conducted on 50 working and 50 housewife’s subjects. All the subjects for study were in age group between 18-32 years. All data for the study was obtained from the clinical biochemistry laboratory of geetanjali hospital.

In our study we were compared level of Vitamin D3 in working women and housewife’s. All the subjects of study group were young females. We were calculated the body mass index of all subjects in both group. The difference between body mass index of both group are (p value 0.2930) non significant. 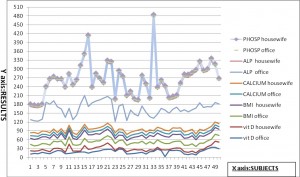 FIG.1: REPRESENT CORRELATION BETWEEN VARIOUS BIOCHEMICAL PARAMETERS ALONG WITH VITAMIN D3 IN SUBJECTS.

The mean of studied subjects were18.72 + 6.97, 9.94+6.14 in office worker women and housewife’s respectively. It was reported that in office working women the level of Vitamin D3 was in insufficiency level, while in housewife’s the Vitamin D3 level was in deficiency range. The difference between both group were (p0.0030) statically significant. The comparative studies of all subjects were shown in figure.

Vitamin D is important for the absorption of calcium, and bone formation and maintenance. With the prevalence of food-fortifying programs, it was thought that Vitamin D deficiency had been eradicated, but deficiency remains unexpectedly endemic in many parts of the world, and its prevalence appears to be increasing.13 The deficiency is prevalent not only in females or the

The limitations of our study, this was a retrospective study, small number of data analyzed. There were no proper history of subject’s dietary habitats, use of dairy products and sun light exposure.

CONCLUSION:  In housewife’s subjects there were low Vitamin D3 levels found. An urgent awareness with treatment of this deficiency must be undertaken to prevent any future consequences of Vitamin D3 deficiency in these young healthy females.

ACKNOWLEDGMENT: All the authors were contributed equally for the preparation of manuscript.