From the last twenty years, the major focus of drug developers is patient compliance towards all existing and newly developing dosage forms. Newer technologies are emerging three fold yearly.

As it is very difficult to synthesize new chemical entity and formulate into a new dosage forms, efforts are being made to introduce new and new drug delivery systems with improved safety, efficacy and bioavailability with minimal dosing frequency and adverse effects 3.

Orodispersible tablets are the tablets that disintegrates within few seconds and dissolve rapidly in saliva without any need of water or chewing action as for media or for breakdown into small particles respectively. Orodispersible tablets usually dissolve within 15 seconds to 3 minutes. This dosage form basically includes incorporation of superdisintegrants and taste masking agents in its composition 4.

The experimental work was conducted at Hi-tech and Industrial Labs, Faculty of Pharmacy, University of Sargodha; Sargodha, 40100, Punjab, Pakistan in 2012.

Preparation of powder blend: All the materials were weighed on electric weighing balance of analytical grade and mixed properly in polythene bags and sieved through sieve no.60 after subsequent grinding in pestle and mortar where required in order to bring uniformity in the powder blend.

Direct Compression Method: All ingredients were weighed accurately on electric weighing balance (Shimadzu A x 200, Japan) of analytical scale. They were subjected to the manual grinding in pestle and mortar in order to bring uniformity in contents and to reduce particle size of saccharine crystals. Powder mixture was than sieved through sieve no.60. At the end after mixing powder was subjected to manually operated ten station rotary tablet compression  machine using 7mm round flat punch with compression force 3N 5.

By this method, five formulations i.e. F1 – F5 were prepared by using pregelatinized starch, Primojel alone and in combination of different concentrations as shown in table 1.

Effervescent Method: All the ingredients were weighed accurately using electric balance (Shimadzu A x 200, Japan). Sodium bicarbonate and tartaric acid were pre-heated at 80°C for 30minutes in order to remove any moisture content. Then all ingredients were grinded manually in pestle and mortar. After that the powder blend was sieved through sieve no.60. Powder was subjected to compression on ten station rotary machine using 7mm round flat punch 6.

By this method, five formulations i.e. F6 – F10 were prepared by using Pregelatinized starch, Primojel alone and in combination of different concentrations as shown in table 1.

Sublimation Method: In this method, camphor was used as subliming agent along with other ingredients of the formulation. All the ingredients of the formulation were weighed accurately on weighing balance (Shimadzu A x 200, Japan) and mixed manually in polythene bags for 20minutes. Than powder was sieved through sieve no 60. Powder blend was subjected to the compression on ten station rotary machine using 7mm round flat punch. Tablets were kept in hot air oven for 6 hours at 60+1˚C for sublimation of camphor 7. By this method, five formulations i.e. F11 – F15 were prepared by using pregelatinized starch, primojel alone and in combination of different concentrations. Camphor was used as subliming agent in these formulations as shown in table 1.

The results of these properties indicate that powder blend had best flow properties and meet the required criteria which are essential for excellent flow. Both bulk density and tapped density were calculated that were further used to measure Carr’s index and Hauser’s ratio. The values of Carr’s index were between14.38% to 16.46% justifying that powder blend had good flow. The Hausner’s ratio was below 1.25 indicates that powder has better flow. The Hausner’s ratio was found to be between1.16 to 1.19 which was within the acceptable range.

Overall results of all parameters of rheological properties were well within the desired limits. 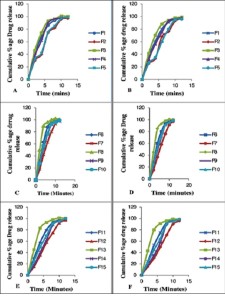 FTIR Studies: FTIR spectrum of optimized formulation was also determined to check any interaction between drug molecules as well as with excipients. The IR spectra of physical mixture of Superdisintegrants with Metformin Hydrochloride and Metformin HCl and Glibenclamide have showed similar characteristic peaks that confirmed the chemical stability of superdisintegrants, glibenclamide and metformin HCl as well as nonexistence of interaction between super-disintegrants and the drugs as show in fig. 2 11. 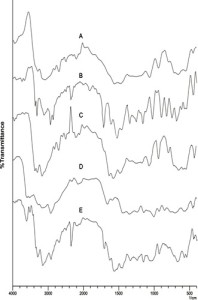 DSC Studies: DSC studies were conducted to check any incompatibility among drug and excipients. DSC thermograms of these drugs (Metformin HCl and Glibenclamide) were taken with two superdisintegrants (Primojel and Pregelatinized starch). The particular DSC thermogram data was scanned.

All thermograms have not exhibited any change when drugs were tested alone or in combination with superdisintegrants. Even there was no shift of peaks while drugs were in combination as shown in figure 3. This study confirmed that there was present no interaction among Metformin HCl, Glibenclamide, Primojel and Pregelatinized starch when alone or formulated in combination 8. 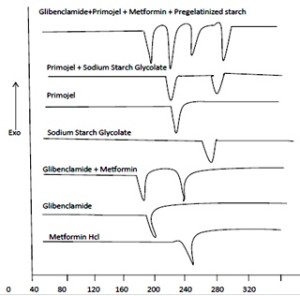 Stability Studies: Stability studies of three best formulations were conducted for six month period. The tablets were kept under accelerated conditions of temperature and humidity 35±5оС and 75%±5% respectively. The sample were taken after 1, 2,3,4,5 and at the end of 6 month. The tablets were evaluated for different parameters. The results had indicated that there are no significant variations occurred in drug content and in vitro dispersion time at the end of 6 months. It means that our formulations were stable under different accelerated conditions of temperature and humidity.

ACKNOWLEDEMENT: The present work was supported by Hi – Tech Laboratory of Faculty of Pharmacy, University of Sargodha under the guidance of Dr. Muhammad Sher.