Chlorthalidone is a phthalamide derivative of benzene sulphonamide and is designated as 2- chloro- 5- (1- hydroxy- 3- oxo- 1- isoindolinyl) benzene sulphanilamide. It is white to yellowish crystalline powder. It is practically insoluble in water, slightly soluble in alcohol. In the present study fast disintegrating tablets of chlorthalidone were prepared by adopting vacuum drying technique to study the effect of different subliming agents with various concentrations on disintegrating time. The powder blend was examined for the pre-compressional parameters. Formulations were evaluated for pre-compressional parameters such as angle of repose, % compressibility and Hausner’s ratio. Tablets were subjected to post-compressional analysis for the parameters such as hardness, friability, in-vitro disintegration time, wetting time and dissolution test. Drug compatibility with excipients was checked by FTIR and DSC studies. Stability studies were carried out as per ICH guidelines for three months. The results obtained showed that quantity of camphor, ammonium bicarbonate, menthol, and urea significantly affect the response variables (P> 0.05).  The results revealed that tablets prepared by the vacuum drying technique using 40% camphor (C4) significantly enhanced the dissolution rate of drug. Stability studies carried out as per ICH guidelines for three months and results revealed that upon storage disintegration time of tablets decreased significantly (P> 0.05). The results concluded that fast disintegrating tablets of chlorthalidone showing enhanced dissolution rate with increasing the concentrations of subliming agents. Among all the formulations C4, A4 and M4 shows the improved dissolution rate which lead to improved bioavailability and effective therapy by using vacuum drying technique.

Now a day fast dissolving tablets are gaining more importance in the market. Currently these tablets are available in the market for treating many disease conditions. More is concerned on hypertension 4, migraine 5, dysphasia 6, nausea and vomiting 7, Parkinson’s disease 8, schizophrenia 9, pediatric emergency 10. These conditions are those which require the drug to be formulated as fast dissolving tablets. Some patient prefers fast dissolving tablets to conventional tablets best of ease of administration, swallowing, pleasant taste and the availability in several flavors 11. The pediatric and geriatrics patients are of particular concern. To overcome this, dispersible tablets 12 and fast-disintegrating tablets 13 have been developed. Most commonly used methods to prepare these tablets are; freeze-drying/Lyophillization 14 tablet molding 15 and direct-compression methods 16. Lyophilized tablets show a very porous structure, which causes quick penetration of saliva into the pores when placed in oral cavity 14, 17. Molded tablets dissolve completely and rapidly. However, lack of strength and taste masking are of great concern 18. Main advantages of direct compression are low manufacturing cost and high mechanical integrity of the tablets 19. Therefore, direct- compression appears to be a better option for manufacturing of tablets. In the present work tablets are prepared by direct compression method involving incorporation of different subliming agents using vacuum drying technique. Crosspovidone (CP) was used as superdisintegrants. Effect of various concentrations different subliming agents on disintegration time, wetting time, and dissolution was studied. Different formulations were prepared by vacuum drying technique composition of which is given in (Table 1).

MATERIAL AND METHODS: Chlorthalidone was procured as a gift sample from IPCA Laboratories, Mumbai. Crosspovidone was obtained as a gift sample from Maruthi Chemicals Ahmadabad. Menthol and ammonium bicarbonate were purchased from Laser chemicals Ahmedabad. Microcrystalline cellulose, mannitol, talc, magnesium stearate, camphor, and urea were purchased from SD Fine chemicals Pvt. Ltd. Mumbai. All other ingredients used were of pharmaceutical grade.

Preparation of Tablets by Sublimation Technique: The tablets containing 25 mg of chlorthalidone were prepared by vacuum drying technique. The drug, diluents, super disintegrants, sweetener and subliming material were passed through sieve # 40. All the ingredients were properly mixed together in a poly bag.

TABLE 1: FORMULAE USED IN THE PREPARATION OF TABLETS

**FC – Formulation Codes, ***All the formulations contain 6 mg of crosspovidone, 1.5 mg of aerosol, and 3 mg of magnesium stearate, and talc

Talc, aerosil and magnesium stearate were passed through sieve # 80, mixed and blended with an initial mixer in a poly bag. The powder blend was compressed into tablets using 7 mm bi concave punches on a ‘Rimek mini press 1’ a 10 station rotary compression machine. After compression the tablets were collected and vacuum dried in a vacuum oven at 800 C until a constant weight was obtained to ensure the complete  removal of sublimable component to make the tablet porous (Table 2).

Evaluation of Chlorthalidone Tablets: The prepared tablets were evaluated for hardness, thickness and diameter, friability, disintegration time, wetting time, drug content, in-vitro dissolution studies, and stability studies. Pfizer hardness tester was used for the determination of the hardness of tablets.

Tablet was placed in contact between the plungers, and the handle was pressed, the force of the fracture was recorded. The thickness and diameter of 4 tablets (2 tablets from each batch) were recorded during the process of compression using calipers (Mitotoyo; Japan).  The friability of tablets was determined using Roche friabilator (Cambel Electronics, Mumbai, India). Two tablets were accurately weighed and placed in the friabilator and operated for 100 revolutions. The tablets were de-dusted and reweighed.  Percentage friability was calculated using the following formula;

DSC Studies:   DSC scan of about 5mg, accurately weighed chlorthalidone and tablet C4 were performed by using an automatic thermal analyzer system. (DSC60 Shimadzu Corporation, Japan) Sealed and perforated aluminum pans were used in the experiments for all the samples. Temperature calibrations were performed using Indium as standard. An empty pan sealed in the same way as for the sample was used as a reference. The entire samples were run at a scanning rate of 100C/min from 50-3000C.

RESULTS AND DISCUSTION: Since, the flow properties of the powder mixture are important for the uniformity of mass of the tablets, the flow of the powder mixture was analyzed before compression to tablets. The values of pre-compression parameter evaluated were within prescribed limits as per USP XXVII and indicates a good free flowing property. The results are shown in Table 3.

The data obtained from post-compression parameters such as hardness, friability, thickness, drug content, wetting time, and in- vitro disintegration time. In all the formulations the hardness values indicates good mechanical strength and the hardness of the tablets decrease with increase in the amount of volatile component 24. Friability of all formulations was less than 1%, which indicates that the tablets had a good mechanical resistance. Thickness of the tablets ranges from 3.28 to 3.95 mm. The weight variation results revealed that average percentage deviation of 20 tablets of each formula was less than ± 7.5%, which provides good uniformity. The disintegration time of tablets decreased significantly with increase in the concentration of volatile substances. Drug content of tablets ranged between 96.86 to 102.70%. The results are shown in Table 4. The formulations containing microcrystalline cellulose as filler (C1-C4, A1-A4, and M1-M4) showed minimum disintegration time this could be attributed towards disintegrating property of microcrystalline cellulose. However, the formulations containing mannitol as filler       (U1-U4) showed longer disintegration time, which could be attributed to slower dissolution characteristics of mannitol 25.

Tablets prepared by vacuum drying technique rapidly exhibits high pores and disintegrates the tablets rapidly. It may be due to their lowest hardness and maximum porous structure was responsible for faster water uptake, hence it facilitates wicking action of crosspovidone in bringing about faster disintegration 26 the wetting time of tablets also decrease with increase in the concentration of volatile substances 26. Table 4 shows the disintegration time of the formulations were ranges between    6.00 - 49.24 Secs. By the addition of the superdisintegrants, the disintegration time decreased significantly (p<0.05). In sublimation method of preparation of tablets the disintegration time decreased regardless of the diluents used. It is because tablets prepared by sublimation method rapidly exhibits high pores and disintegrates rapidly.

Tablets prepared with 4% superdisintegrants and 40% camphor showed least disintegration time as compared to all other formulations this is because of their porous structure responsible for faster uptake hence it facilitates wicking action of crosspovidone in bringing about faster disintegration 27. The dissolution of chlorthalidone from tablets is shown in Fig 1-4.  The dissolution of the drug   from the tablets prepared by vacuum drying technique using camphor had was quicker than those prepared by other subliming agents by vacuum drying technique. This may be due to their porous structure which is responsible for faster disintegration 27. Crosspovidone containing tablets rapidly exhibits high capillary activity and pronounced hydration with a little tendency to gel formation 28 and disintegrate the tablets rapidly. 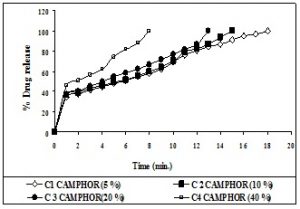 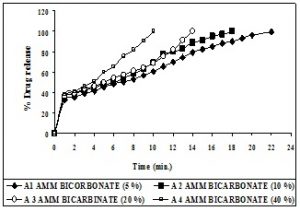 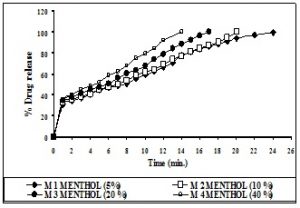 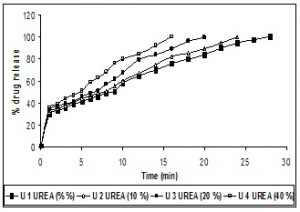 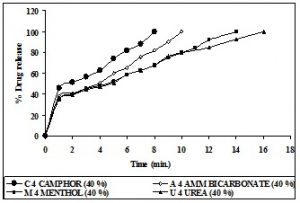 Tablet C4: The formulation C4 shows the characteristic absorption bands (Fig 6) in the following IR region. The broad peak in the range 3280-3400 shows the presence of –OH hydrogen bonded of both drug and Mannitol. -NH2 and NH of drug 2960.  The peak at 3160 is an aromatic CH stretching of the drug   however peaks at 2880, 2960 CH stretching. The sharp peak at 1680 may be ring C=O of the drug molecule. As there is no variation and shift in the position of characteristic absorption bands in the IR spectrum of the formulation C4 it can be justified that there is no interaction between pure drug and other excipients used for the formulation. 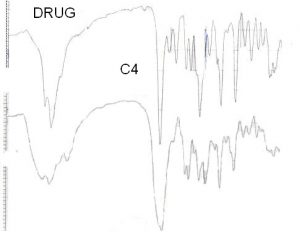 As the peak height is reduced and has become more broad in nature indicates that there is a change in the physical state of the pure drug from its crystalline nature to amorphous, so the change from crystalline to amorphous nature is a characteristic property of the drug showing increase in the solubility of the drug. So therefore we can conclude that the solubility of the drug in the dosage form is much higher than the pure drug. Further as there is no change in the melting point of the drug in its pure form and in its dosage form clearly reveals that there is no interaction of the drug with the polymer. 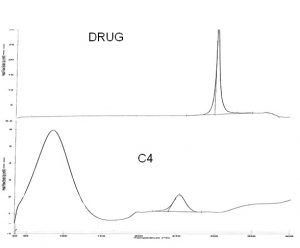 The stability study for all the formulations were carried according to ICH guidelines by storing the tablets in a stability chamber (Labcare, Mumbai) at 40o ± 20 C/ 75 ± 5% RH for three months. Decrease in the disintegration and the wetting time was observed in all the formulations, since during vacuum drying method tablets were exposed to only 6hrs at 800 C, where as 90 days and 450 C  were used during stability studies. The long storage of 90 days at 450 C might have removed the trace amounts of volatile components; those were not removed during the short period bin vacuum drying method. There was no significant change in drug content of all the formulations (Table 6).

CONCLUSION: The results of disintegration, time, wetting time and dissolution rate revealed that the amount of volatile component and type of filler significantly affect the dependent variables likes disintegration time, wetting time and dissolution rates. Thus it is concluded that fast disintegrating tablets can be prepared with a view of obtaining faster action of the drug and would be advantageous in compilations to the currently available conventional dosage forms. With the adopted vacuum drying technique an optimum point can be reached in the shortest time with minimum efforts and this technique would be an effective alternative approach compared with the use of more expensive adjuvant in the formulation of fast disintegrating tablets. Finally it can be concluded that the superdisintegrant and camphor had played an important role to decrease disintegration time and to enhance the dissolution rate in vacuum drying technique, hence could be used to prepare the Fast Dissolving Tablets.