INTRODUCTION: Stress is the nonspecific response of the body to demand. A stressor is agent that produces stress at anytime 17. Diverse types of stresses are used in previous studies on experiments with rats. Obsessive swimming in cold water is one such stress, which produces output of norephinephrine in definite parts of the brain structures and also causes alteration in blood cortisol level 11.

Unescapable stress is associated with impairments in learning and memory manifested by deficts in maze escape behaviors. These deficts appear to be related to alterations in brain structures involved in memory, including amygdala and hippocampus 19. The Y-maze can be used as a measure of short term memory, general locomotor activity and stereotypic behavior 13.

Repeated exposure to inescapable stress is associated with a neither ultimate reduction of norephinephrine in the hypothalamus and hippocampus 18. The current drug therapies on stress management have dilemma including poor efficiency, withdrawal symptom and adverse effects 16. Recently, much awareness has been created on the relevance of hippocampal neurogenesis to the pathophysiology and treatment of memory loss. In the nervous system, especially brain contains higher concentration of PUFA. Omega-3 fatty acid are critical for the physiologic function of neuronal cell membrane. The important role of these fatty acids in central nervous system function, and the potential EFAs have in the treatment of various neuropsychiatric disorders. Omega-3 fatty acid supplementation decreases anxiety in the animal models of drug addiction 7.

In humans, PUFAs have positive effects on the pathophysiology of a wide range of stress-related disorders 9. Adult neural tissues have limited sources of stem cells, which makes neural regeneration in them less promising. Stem cell transplantation seems to be a promising strategy for treatment of several central nervous system degenerative diseases like Alzheimer’s disease, Parkinson’s disease 23. Bone marrow mesenchymal stem cells (BMSCs) are an example of self-renewing multipotential cells with the developmental capacity to give rise to certain cell types 10, 4, 1.

These cells seem to be able to differentiate into hepatocytes, osteocytes, cardiomyocytes, and neural cells in vitro 3, 12. Lee et al. 8 used human umbilical cord blood MSCs in mice with Alzheimer’s disease and demonstrated cognitive rescue with restoration of learning and memory functions. The present study was aimed to compare the effects of omega-3 and MSCs fatty acid on cold stress induced neuronal changes in the hippocampus of rats.

Totally 37 male Wistar albino rats provided by the Saveetha University were used in this experiment. The study was conducted at BRULAC, Saveetha University, Tamil Nadu, India. The care and maintenance of the animals were maintained as per the Committee for the Purpose of Control and Supervision of Experiments on Animals (CPCSEA). Three rats were housed in each polypropylene cage under standard laboratory conditions with water and food ad libitum. The experimental protocol was subjected to scrutiny by an institutional animal ethical committee for experimental clearance (IAEC) with approval number SU/BRULAC/016/2014.

Isolation and characterization of BMSCs:

A 6-Week Wistar rat weighing 80 g was used for isolation of BMSCs. The rat was anesthetized with 10 mg/kg xylozine and 80 mg/kg ketamine, cocktail. Following removal of femur and tibia, muscles and connective tissue were cleaned. Both ends of the bone were cut and the marrow was slowly flushed out into an aspetic glass container with culture medium at one end of the bone. 20 mL of Dulbaco’s minimal essential medium (DMEM) along with 10% fetal bovine serum (FBS) was added to a test tube. The medium was aspirated into a sterile 2mL syringe and was forced into the medullary cavity of the long bones. The flushed medium was collected in a 15 ml ependroff’s tube. Bone marrow cells were thus suspended in DMEM containing 10% heat- inactivated FBS. Bone marrow was centrifuged at 1,500 r/min. After removal of supernatant solution, the adherent cells were pipette into a T25 flask which was filled with 4 mL of DMEM and 10% FBS. The flasks were incubated at 5% CO2 at 370C.

The cells were retrieved and passaged. From the first passage to the second passage, longer time duration was taken for the cells to adapt to in vitro condition. However, cells at passages 3-6 require relatively shorter time to adapt to new environment. Passage 6 cells were analyzed by flow cytometry for positive expression of CD44 and CD90 and negative expression of CD45. The viability of cells was determined by Trypan blue exclusion test as described by Tolani 20. Briefly, cells were incubated with Trypan blue dye for 1 minute. Blue CD44 and CD90 positive cells and white CD 45 negative cells were counted in ten 20 X fields of view, and the percent of viable cells was calculated. Once the positivity was obtained, cells were cultured again to 90% confluence before they were used for treatment.

Behavioural study was assessed by spontaneous alteration using Y-maze. The Y-maze can be used as a measure of short term memory, general locomotor activity and stereotypic behavior. Therefore, spontaneous alteration was assessed using a Y-maze composed of equally spaced arms (1200, 41cm long and 15 cm high). The floor of each arm is made of Perspex and is 5cm wide. Each mouse was placed in one of the arm compartments and was allowed to move freely until its tail completely enters another arm. The sequence of arm entries is manually recorded, the arms being labelled A, B or C. An alteration is defined as entry into all three arms consecutively, for instance if the animal makes following arm entries; CAB,ABC,BCA,ACB,BAC.

The number of maximum spontaneous alteration is then the total number of arms entered minus two, and the percentage alteration is calculated as {(actual alternations/maximum alternations)x100}. For each animals the Y-maze was carried out for 5 minutes. The apparatus was cleaned with 5% alcohol and allowed to dry between sessions.

Under aseptic condition, 5 ml of animal’s blood was collected from the internal jugular vein using a 21 gauge 5 ml syringe. The blood was then transferred to a sterile plain vacationer tubes. The blood was allowed to stand for 30 minutes to enable clot formation. Then the blood was centrifuged at 3000 rpm in a centrifuge machine and 1 ml of serum was extracted. The serum was analyzed for corticosterone hormone. Cortisol assay was done using ADVIA Centaur System. The ADVIA Centaur cortisol assay is a competitive immunoassay using direct Chemiluminescnce technology.

The animals were anaesthetized with ether and intra-cardiac perfusion of normal saline followed by 10% formal saline was done. After euthanized, the brain was rapidly removed by inserting the tip of the curved scissors into the foramen magnum and a single lateral cut was made into the skull extending forward on the left and right side. With a bone cutter the dorsal portion of cranium was peeled off and by means of blunt forceps brain was dropped onto the ice cold glass plate leaving the olfactory bulbs behind. The whole process of removing brain takes less than 2 minutes. Brain were dissected out from each animal and were fixed in 10% chilled neutral formalin for 14 hours at 40C. Dissection was made on ice-cold glass plate. Further histological processing was done. Paraffin embedded sections (Bregma -1.8mm to -3.8mm) of 10 µm thickness were cut on rotary microtome and stained with hematoxylin and eosin for demonstration. 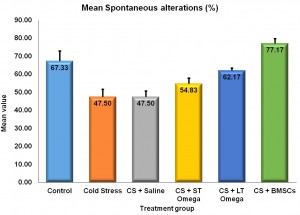 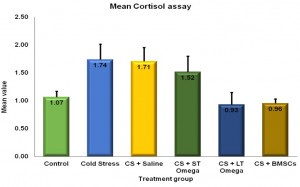 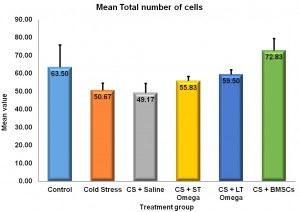 DISCUSSION: The parts of brain structures are involved in learning and memory. Considering the role of memory, it is of interest that brain structures involved in memory are primarily involved in the neurobiological response to unavoidable stress. In the present study cold stress was given to rats which cause neuronal loss in the hippocampal region 16, 1, 18. Cold water swim stress induces major neuronal loss in hippocampus region of rats 22. Behaviour was assessed by spontaneous alteration using Y-maze 13.

CONCLUSION: Taken together, our study demonstrated BMSC’s had better therapeutic effect than OFA( short term or long term) followed by  in cognitive decline associated with stress.

ACKNOWLEDGEMENT: We thank Prof Dr. Sarswathi for her valuable suggestions throughtout the study period and also Director of research for helping us with biostatistics.