ABSTRACT: There are various treatment regimens including different antibiotics and antacid medications for eradicating Helicobacter pylori to compare the effectiveness of 7-day concomitant regime with classic triple regimen in eradicating H. pylori. In this randomized clinical trial, 206 dyspeptic patients proven H. pylori infection, attended to a gastrointestinal clinic in Khorramabad (west of Iran) were studied. The patients were randomly divided in two equal groups. Classic group were treated for 14 days with a regimen including omeprazole 20mg, amoxicillin 1g and clarithromycin 500mg, twice daily. In concomitant group, the patients were treated for 7 days with a regimen including omeprazole 20mg, amoxicillin 1g, clarithromycin 500mg and metronidazole 500mg twice daily. During the treatment period and a week after the end of treatment, the patients were evaluated in terms of possible side-effects and medication acceptance and tolerance. For confirmation of eradication, 6 weeks after the end of treatment, urea breath test with carbon 13 (UBT) was done for both the groups. Data were analyzed using descriptive statistics, T-test and chi-square test, logistic regression through SPSS software version 21. The level of significance was considered less than 0.05. H. pylori eradication rate in classic group was 68.9% and in concomitant group was 83.4%. (p - value = 0.03). The incidence of gastrointestinal side-effects was not statistically different between the groups. H. pylori eradication rate in 7-day concomitant treatment regimen is more than 14-day classic regimens. Therefore, it is suggested to use 7-day concomitant regimen as first-line of H. pylori eradication.

INTRODUCTION: A large proportion of the world's population has been infected by Helicobacter pylori (H. pylori). The most important cause of gastric and duodenal ulcer disease is infection with Helicobacter pylori 1. H. pylori are a gram negative, curved rod-shaped, flagellated bacterium that was introduced in 1982. This bacterium residents in the gastric mucosa and afflicts nearly 50% of the world population and results in problems such as dyspepsia, peptic ulcer disease, gastric cancer, gastric MALToma. Helicobacter pylori are more common in developing countries 2.

Indiscriminate and often unnecessary use of antibiotics increases resistance to antibiotics such as antibiotics affecting H. pylori. Resistance to clarithromycin has increased from 5 percent to nearly 20 percent over the past 10 years 6. Appropriate and acceptable regimen for the eradication of H. pylori is the regimen by which the eradication rate is over 85 percent 5. A 14-day classic triple therapy regimen (containing a proton pump inhibitor, clarithromycin with metronidazole or amoxicillin) has been approved as first-line treatment in many countries, including Iran. This regimen is named Standard Triple Therapy (STT). The effectiveness of this treatment regimen has decreased in the past decade 6, 9 and in recent studies in some countries, the H. pylori eradication rate by this regimen has reached to an unacceptable level (≤ 80 percent) 10, 11.

The researchers believe that one of the main reasons for the increase in H. pylori eradication rate is resistance to antibiotics such as clarithromycin and metronidazole 6. This issue has led to conduct vast research on alternative first-line therapeutic regimens and the investigation on Sequential, concomitant and hybrid therapy regimens has been suggested. Concomitant regimen has been defined as quadruple therapy containing proton pump inhibitor with three antibiotics with or without bismuth that has been studied in various time intervals of 3 days to 14 days 12, 13. Considering the rising resistance to some antibiotics and declining the efficacy of common therapeutic regimens, this study aimed to compare the effectiveness between the classic triple therapy regimen and seven day concomitant therapy regimen to achieve therapeutic regimens with optimal therapeutic efficacy.

MATERIALS AND METHODS: This study was a randomized clinical trial conducted on dyspeptic patients attended to Shohada-ye-Ashayer Hospital of Khorramabad (a city in west of Iran) from October 2015 to March 2015 (IRCT20160126237 36N2). In this study, cases with proven H. pylori infection that had indications of H. pylori eradication were studied in term of efficacy of therapeutic regimens. Indications for H. pylori eradication included an H. pylori positive gastric biopsy and the co-existence of duodenal ulcer, gastric ulcer, gastric malt lymphoma, early gastric cancer and family history of gastric cancer.

Inclusion Criteria: A proven Helicobacter pylori infection based on indication for H. pylori eradication and consent for participation in the study. After obtaining written consent, participants were enrolled into the study. Exclusion criteria: age less than 18 years, history of allergies to medications, history of previous H. pylori eradi-cation, recent history of antibiotic use (in the last month), pregnancy, presence of cirrhosis and chronic renal failure.

A convenience sample of dyspeptic patients attended to the GI clinic of Shohada-ye -ashayer hospital, were selected and assigned into in the study groups randomly. 214 patients who met the inclusion criteria of the study were randomly divided into two equal groups of 107 patients: the classic 14-day regimen and the 7-day concomitant regimen. The patients of classic regimen group received Omeprazole 20 mg; amoxicillin 1 g and clarithromycin 500 mg twice a day for 14 days and the patients of concomitant regimen group were treated with omeprazole 20 mg, amoxicillin 1 g, clarithromycin 500 mg and metronidazole 500 mg twice a day for 7 days.

During the first week of treatment, the patients were visited in term of side effects and drug tolerance, and all data were recorded. Then, they were re-called one week after the end of treatment. 6 weeks after completion of treatment, urea breath test with Carbon 13 was performed in the both groups to confirm the eradication of Helicobacter pylori and if this test was negative, H. pylori eradication would be reported. Data were analyzed using Chi-square test and logistic regression through SPSS statistical software (version 21).

RESULTS: In this study, 214 patients with Helicobacter pylori infection were randomized to two groups of 107 patients for receiving classic therapy or concomitant therapy from the 7-day concomitant regimen group, 2 patients were excluded because of drug adverse effects and another 2 cases did not attend for eradication testing. From the classic regimen group, 3 cases for serious side effects of drug and 1 case for lack of cooperation were excluded. Ultimately, 103 samples completed the study in each group (Fig. 1). The average age of the samples, in the classic regime group and concomitant regime groups were 42 ± 11.88 years and 41 ± 13.75 years respectively. Patients were classified in the age groups of under 30 years, 31 - 40 years, 41 - 50 years and over 50 years. Most of the patients in both groups 31.1% (64 cases) were in the age group of 31 - 40 years, In the concomitant  group, 46.6% (48 patients) were male and 53.4% (55 cases) were female, and in the Classic group, 49.5% (n = 51) were male and 50.5% (n = 52) were female. The demographic data for each therapeutic group are summarized in Table 1. Statistical analysis showed no significant difference between concomitant and classic treatment groups in terms of age and sex of patients.

TABLE 1: THE DEMOGRAPHIC DATA OF PATIENTS BASED ON THE THERAPY GROUP 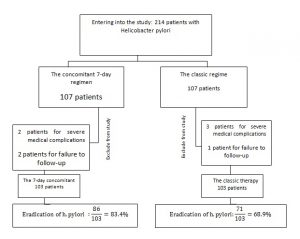 FIG. 1: THE COMPARISON OF THE CLASSICTRIPLE REGIMEN AND THE 7-DAYS CONCOMITANT REGIMEN IN THE HELICOBACTER PYLORI ERADICATION

DISCUSSION: The ideal and acceptable therapeutic regimen for H. pylori infection treatment should be simple, short-term, well-tolerated and high eradication rate. Short-term duration therapeutic regimens have many benefits including lower cost, higher compliance, as well as lower side effects and drug resistance 12, 13.

A study by Moghaddam M et al., aimed to comparing the triple therapy vs quadruple therapy (concomitant) for the eradication of Helicobacter pylori in 56 patients with chronic dyspepsia. In this study, the treatment success rates based on UBT in the triple therapy and quadruple therapy were 50% and 48% respectively and not significant difference observed between the two therapeutic methods. Results of that study are inconsistent with the findings of our study. The eradication rate in both concomitant therapy and classic regimen were lower than our study. This difference may be explained by differences in the demographic characteristics, the severity of disease in the studied populations or differences in resistance to amoxicillin and clarithromycin. However, Small sample size with a high rate of exclusion could have distorted the results of study 15.

In a study conducted by Fattahi et al., the eradication rate of triple therapy with omeprazole, amoxicillin and clarithromycin was reported to be 85% and the treatment success in this study was more than in our study. It can be interpreted that in the past decade, the classic (triple) regimen has been effective enough but with increasing in resistance to antibiotics, their effectiveness had been declined.

Due to the use of multi-drug regimens to Helicobacter pylori eradication, the incidence of adverse events was expected to be high in the patients treated with these therapeutic regimens. Adverse events were examined in the participants based on the patient's self-report during and after the treatment. Side effects included nausea, vomiting, and abdominal pain, diarrheic, unpleasant taste in the mouth, anorexia, headache, and skin rashes. Side effects were reported by 17 patients (16.5%) in the classic group and by 15 patients (14.5%) in the concomitant group. No significant relationship was found between the rate of side effects and the H. pylori eradication rate among the therapeutic groups.

Abdominal pain was the most common side effects; that this finding is not consistent with many studies. In the study of Kwon et al., In South Korea in 2011, an unpleasant taste in the mouth was reported as the most common complication among the samples. The main reason for a metallic taste in the mouth can be attributed to the use of metronidazole 14. Furthermore Aminian et al., in Iran, reported nausea as the most common side effects 20. In the study of Chan et al., in China in 2001, the most common complications were nausea, vomiting, dizziness and bad taste in the mouth 19. Side effects in our study are somewhat close to that of the study by Moradi 15. However, in our study, fewer side effects (15.5%) were reported that could be due to short time of treatment (in the concomitant group). The review of the literature showed that side effects and their incidence rates are very different in various studies. This could be attributed to racial differences, quality of medicines and differences in the selected groups. However, other studies have also showed no significant correlation between the incidence of adverse side effects and the H. pylori eradication rate 14, 19, 21.

ACKNOWLEDGEMENT: This study is a part of the internal medicine thesis entitled "Comparison of the effectiveness of triple therapy for H. pylori eradication with concomitant therapy in dyspeptic patients admitted to gastrointestinal clinic of Khoramabad Hospital in 2016. Also, this study has been registered in the Iran Clinical Trial Registry (No. 2016012623736N2). The financial support of this research was provided by deputy of research Lorestan university medical science; we would gratefully like to thank them.