ABSTRACT: Helminthes infections are more common in poor countries where people suffer from poor health hygiene and sanitation, though there are lot of marketed drugs available for these disease but the interesting thing about antihelminthics is that they are either pypirazine or benzimidazole derivatives, so as medicinal chemist the attention will be drawn towards these different moieties which exert same biological action, in this present work  five derivatives  of piperazine were synthesized by conventional methods using two schemes, by scheme 1 three compounds were synthesized which were Bis benzyl derivatives of pierazine  and by scheme 2  already prepared piperazine 2,5 di one was reacted with benzimidazole derivatives to yield  finally two benzimidazole linked piperazine derivatavies and these two different classes of piperazine deiatives were  screened for antihelminthic activity against Pheretima posthuma to compare their potency in context of calculating paralyzing and death time. Result showed that bis-benzyl derivatives possess to some extent better activity than that of benzimidazole linked piperazine derivatives.

INTRODUCTION: Piperazine  is  a  saturated  six member heterocyclic  compound  containing  two  nitrogen at  1 and  4  position  (as  called  1, 4‐hexahydropyrazine). Piperazine was first introduced as an anthelmintic in 1953. A large number of piperazine compounds have anthelmintic action. In comparison with benzimidazole (a imidazole derivative which too possess potent antihelminthic activity and even some marketed drugs are available as antihelminthic) has always drawn the attention of many researchers to compare the potency of these two different nucleus, though both of their mechanism of action is different in contrast to antihelminthic activity 1.

The anthelminitic activity of piperazine and related compounds is said to be, based on blockage of the response of the worm muscle to acetylcholine, at the myoneural junction. This action is mediated by its agonist effects upon the inhibitory GABA receptor, The selectivity for helminths is because vertebrates only use GABA in the CNS and the helminths' GABA receptor is a different from the vertebrates' as a result causing a flaccid paralysis in the worm, which is dislodged from the intestinal wall by normal peristaltic action and expelled in the feces 2, 3, 4.

The anthelmintic action of the piperazine compounds depends on their capacity to produce a state of narcosis in the worms. 5. The addition product of piperazine and phosphoric acid is useful as an anthelmintic agent for poultry, canines, felines, equines, porcines, and humans 6 whereas benzimidazole derivatives like albendazole selectively bind to nematode ß-tubulin, inhibiting polymerization, thus preventing the formation of microtubules and preventing cell division. The loss of the cytoplasmic microtubules leads to impaired uptake of glucose by the larval and adult stages of the susceptible parasites, and depletes their glycogen stores thus decreasing ATP formation ultimately leads to death of worms 4, 7.

Various methods are reported for the synthesis of piperizine derivatives, though many piperazine derivatives occur naturally, piperazine can be synthesized by reacting alcoholic ammonia with 1,2- dichloroethane, by the action of sodium and ethylene glycol on ethylene diamine hydrochloride, or by reduction of pyrazine with sodium in ethanol 7 various research has been cariied out on synthesis on piperizine and pirazine  and  those respective deivatives were found to be useful in combating various diesase some important derivatives of piperazines which were already proved to be pharmacologically and biologically are I,e 5-methylpyrazine-2-Carbohydrazide possess antibacterial 9 and antiinflamatory activity 10 N-aryl and N-alkyl piperazine derivatives 11, 12 posses antibacterial activity and enhanced antibacterial activity is achieved by incorporation of triazine ring in the piperizine ring 13 Mannich bases derived from n-methyl piperazine is found to active against cancer 14.

Based on different researches mostly it is seen that N-alky/phenyl derivaties or bisaryl/benzyl, (benzyl substitution increase antibacterial activity in comparison to methyl phenyl substitution) 10, 11 derivatives of pipearazine are potent molecules, the potency is quantified by the nature of electron donating or electron withdrawing groups substituted on the nucleus.

As mention above that various literatures of piperazine signifies N-phenyl /alkyl or bisaryl/benzyl derivatives are found possess various pharmacological and biological activities here the work is aimed to synthesis some bis benzyl (containing N-methyl group)derivatives of piperazine in one hand and benzimidazole linked piperazine derivatives in other hand and compare their antihelminthic activities.

The chemicals used for the experimental work were commercially purchased  from local source of supplier Rankem (New Delhi), and thionyl chloride was used of Merck (Mumbai), These solvents and reagent were of AR and LR grade and purified before use, The commercially available grades of solvents were distilled. All the compounds were synthesized by conventional methods; melting point was determined by open capillary tube method and synthesized compounds were purified by re-crystallizing using suitable solvents and yield value and percentage purity were determined respectively.

In a beaker, the solution of ethylene diamine (2ml) and 4-dimethyl amino benzaldehyde (40Mm, 5 gm) in 50 ml of methanol was added with 40mM of ammonium purpurate was added portion wise with continuous stirring for 3 hours at ice cold temperature and allowed to stand for few minutes. The crystalline deposit was settled down which was re-crystallized from methanol to produce the intermediate compound N, N’-Bis-(4-dimethyl amino benzyl)-ethane-1, 2-diamine. Again 7.5 Mm (2.44gm) of intermediate compound and 7.5 Mm (0.675 gm) of oxalic acid was stirred in ether at ice cold temperature for 1 hour.

The reaction mixture was left over night and the separated solid product was obtained by filtration and dried. The crude drug was re-crystallized from ethanol affording 1, 4-Bis-(4-dimethyl amino benzyl)-piperazine-2,3-dione. 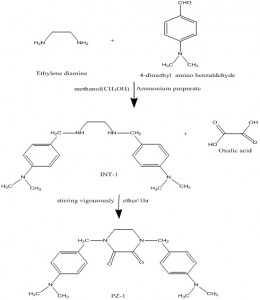 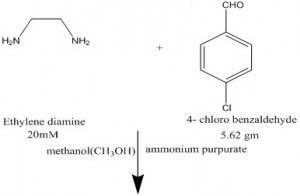 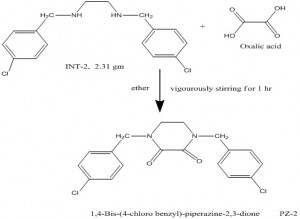 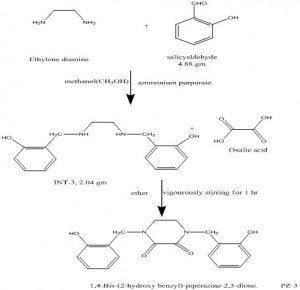 At first, 15 gm of glycine and 75 ml of ethylene glycol was mixed in a three naked flask fitted with condenser and mechanical stirrer. The mixture was heated in sand bath to 1750C, maintaining the temperature, it was continuously stirred for 1hour. The dark brown reaction product was cooled to room temperature and kept at refrigerator for overnight. The next day, the obtained liquid was centrifuged at 3000 rpm for 20 minutes which yielded crude 2,5-diketo piperazine which was yellowish white crystal. Then it was crystallized using water and very few amount of decoloursing carbon to yield pure white crystalline 2, 5-diketo piperazine.

For the compound INT-4, 0.02 mole of o-phenylene diamine (2.16g) and 0.02 moles of 3, 5-dinitro salicylic acid (4.56 gm) were refluxed in presence of 4N HCl at 1000C for 3 hours and 10 minutes. Then completion of reaction was checked by TLC. Then 10% NaOH solution was added to make the solution alkaline. The reaction mixture was cooled and allowed to stand for 5 minutes which yield crude  2-(2-hydroxy-3,5-dinitro phenyl)-1H-benzo[d] imidazole which is then recrystallized from ethanol. For INT-5, 2.76 gm of salicylic acid was taken and procedures were same. The compound formed was 2-(2-hydroxy phenyl)-1H-benzo[d] imidazole. 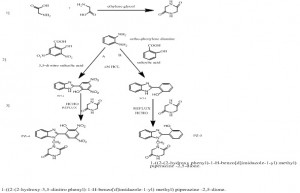 The synthesized compounds (PZ1-PZ5) were evaluated in vitro for their antihelmintic activities     according to the protocol mentioned below. The earthworms were collected from fish farm, Tararha. Sunsari, Nepal and species identification was done from Biology Department of Central Campus of Technology, Hattisar, Dharan, Nepal.

The anthelmintic activity was evaluated on adult Indian earthworms by Mathew et al method 15. For preliminary evaluation of anthelmintic activity test samples of synthesized compounds was prepared at the concentration of 1000, 800, 600, 400 µg/ml in DMSO (6%) with normal saline and 6 worms Pheretima posthuma of 8-10cm were placed in petridish containing 25 ml of above test solutions of synthesized compounds. Mebendazole (4mg/ml) was used as positive control and normal saline with DMSO (6%) is used as negative control. All the test solutions and standard solutions were prepared freshly before starting the experiment. Observations are made for the time taken for paralysis when movement was lost or no movement. Worms should not relieve even in normal saline. Time for death of worms were recorded after ascertaining that worms neither moved when shaken vigorously nor when dipped in warm water and fading of color of worms was observed.

Preparation of stock solution and test solution of piperazine derivatives: 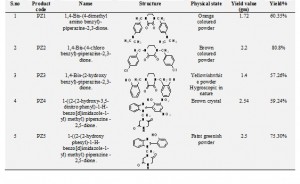 Melting point is valuable criterion of purity for an organic compound as pure crystal is having definite and sharp melting point.

DISCUSSION: Various piperazine derivatives were prepared by two different schemes viz. scheme 1 and scheme 2. In scheme 1, ethylene diamine was reacted with substituted benzaldehyde in presence of ammonium purpurate (reductive alkylation reaction) followed by reaction with oxallic acid (cyclization process) to afford 1, 4-Bis-(4-substituted benzyl)-piperazine-2,3-dione. All the compounds were purified through recrystallization by ethanol. All the synthesized compound have been characterised by physico chemical datas such as melting point, colour, %yield, solubility etc.compunds PZ-2 and PZ-3 were synthesized earlier and were found to be active against   Enterobious vermicularis and Fasciola hepatica 3.

PZ-1 was synthesized for the first time by substituting p-Cl, o-OH by N-(CH3)2 in the benzyl ring of Bis phenyl piperazines derivatives. The synthesized derivatives(PZ1-3) posess 2,3 dione moiety as common, as it has been reported earlier 2,3-dione moiety in the structure of piperazine was considered as promising candidates as an antihelminthic agent 3, 16. In scheme 2, the targeted compounds were synthesized fusing benzimidazole and piperazine through Mannich reaction. The synthesized compounds were subjected to antihelminthic activity as per referred protocol using mebendazole as standard drug against   Pheretima posthuma. 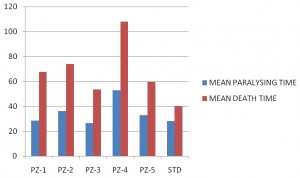 CONCLUSION: Compared to two different schemes, the compound produced by scheme:  PZ-1 got more yield value. Among them PZ-2 yield percentage was high, 80.8%. Scheme 2 had good yield value but took comparatively longer time of reaction as it produced complex or higher molecular weight piperizine derivatives. It proves that ethylene diamine is the good precursor for synthesizing piperazine and its derivatives.

The synthesized compounds were screened for antihelmintic and antioxidant activity. From scheme 1: PZ1, PZ3 were found to have very good anti helminthic activity. It indicates that the presence of 4-dimethyl amino group and 2-hydroxy group at para position of benzyl moiety attached to the piperazine ring enhanced the activity compared to other groups like 4-chloro derivatives at the same position. Similarly from scheme 2: PZ-5 was potent which had 2-hydroxy benzyl group attached to benzimidazole. It shows that incorporation of 2-hydroxy benzyl group in drug structure was found to be active against helminthes (earthworms).