The chemical composition of the essential oil of Hyptis suaveolens (L.) leaves from three different regions of Tamil Nadu was analysed by GC – MS method and the constituents of three different localities were compared. In all 12 compounds were identified and they were α-caryophyllene, α-pinene, α-thujene, camphene, D-limonene, sabinene, β-myrcene, 1, 8-cineole, γ-terpinene, α-terpinolene, α-terpineol, phenentherene. It was found that the constituents of the essential oil differed in quantities in the three different populations of Hyptis suaveolens (L.) which may due to local geographical differences.

INTRODUCTION: The plant Hyptis suaveolens (L.) Poit commonly known as Wilayati tusi belongs to the family Lamiaceae and is an ethnobotanically important medicinal plant. The plant has been considered as an obnoxious weed, distributed throughout the tropics and subtropics. Almost all parts of this plant are being used in traditional medicine to treat various diseases. The leaves have been utilized as a stimulant, carminative, sudorific, galatogogue and as a cure for parasitic cutaneous diseases 1.

Hyptis is known to be used in traditional medicine for the treatment of various illness and has been found to possess significant pharmacological 5anticancerous properties 6and tumorigenic 7properties. In additional to above it also has insecticidal properties and said to be mosquito repellant 6. The aim of the current study is to determine and compare the chemical composition of essential oil of Hyptis suaveolens (L.) Poit collected from three naturally growing sites of Tamil Nadu.

Extraction of Essential Oil: Fresh leaves of Hyptis suaveolens (L.) Poit were homogenized with distilled water into slurry, which was hydro distilled by Clevenger-type glass apparatus for 4 h for isolation of oils. The oil samples were stored at 0°C in air-tight containers after drying them over anhydrous sodium sulfate and filtered before GC-MS analysis.

Identification of the compounds: Oil components were identified by matching the peaks with computer Wiley MS libraries and confirmed by comparing mass spectra of the peaks and those from literature 8, 9, 10, 11.

RESULTS AND DISCUSSION: The chemical composition of the essential oil isolated from the leaves of Hyptis suaveolens (L.) Poit collected from Madurai, Dindigul and Kanyakumari which experienced different climatic and geographic circumstances were determined by GC and MS analysis. While collecting the experimental sample, we took care to pick up the leaves at the same developmental stage. The qualitative and quantitative compositions of the essential oil of the leaves of Hyptis suaveolens (L.) Poit are presented in Table 1 and Figures 1, 2 & 3. 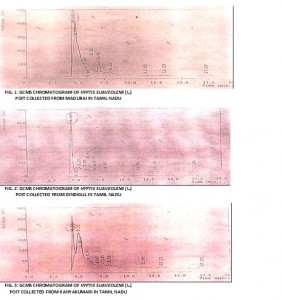 This may be ascribed and parallel to the investigations of Sharma et al., 12 who observed the different quantities of 1, 8-cineole in the populations of Bangalore, Hyderabad and Lucknow. This is probably due to the local geographical differences. It has been already reported by various workers 11, 12, 13.

In conclusion, our study has shown that the qualitative and quantitative properties of essential oils of three different population of Hyptis suaveolens (L.) Poit are mainly due to local geographical differences.

ACKNOWLEDGEMENT:  The authors are grateful to the Management and Principal for providing necessary facilities and support.