ABSTRACT: Background: In India, the respiratory syncytial virus (RSV) is a major cause of lower respiratory tract infections (17 to 32%) in the pediatric age group. Viral detection during the acute phase of infection is a critical step for care and prevention. Objectives: We sought to investigate the detection of RSV by rt-RT-PCR, conventional PCR and cell culture among pediatric patients. Methods: Throat/nasal swab collected from the children (0-60 months) either outpatients/in patients having a respiratory illness from 2 to 5 days. Results: Total 375 samples were collected during 2011-2014, out of these 43 (11.4%) were positive for RSV by rt-RT-PCR, 38 (10.1%) and 22 (5.8%) were positive by conventional PCR and cell culture respectively. Bronchiolitis and pneumonia were commonly present in RSV (p<0.005). The positivity of the RSV was higher in infants (0-6 months). Conclusion: The rt-RT-PCR is rapid and sensitive, may replace conventional methods for early clinical diagnosis. However, cell culture and conventional PCR will remain important for molecular epidemiology. Age was an important risk factor which affects the positivity of RSV. Different clinical symptoms in RSV will help for an early and accurate diagnosis. Data will support to reduce the overall RSV-associated morbidity and mortality.

INTRODUCTION: Respiratory syncytial virus (RSV), the family Paramyxoviridae 1 is recognized as a major cause of acute respiratory tract infection, most common in young children of mainly first two years of life, elderly and immunocompromised patients 2 - 3. During, RSV infection destruction of epithelial cells results in bronchiolitis and pneumonia among children 4.  According to the World Health Organization (WHO), global RSV burden as 64 million cases and about 160,000 deaths yearly 5.

Early detection of the virus is a critical step in the initiation of proper care, and the prevention of the further spread of the virus in public places such as schools and health care facilities. A method like viral isolation in cell cultures continues to be considered the most definitive test for diagnosis. However, nucleic acid detection methods have proven to be more sensitive for RSV detection 9. Estimating the burden of RSV  in a large number of population and over a long period, helpful in understanding overall transmission patterns and community burden in Northern India, as well as will help develop effective control and prevention strategy. To address the need for population-based studies, we sought to compare the RSV detection by three methods, i.e., real-time PCR (rt-RT-PCR), conventional PCR and cell culture among pediatric patients. We have also gained insight into the clinical features of RSV pediatric age groups.

Study Design and Participants: This study designed as a cross-sectional hospital-based study in Northern India from August 2011 to December 2014. Patients aged <5 years, both male / female with symptoms of Acute Respiratory Tract Infection (ARTI), who were attending general hospital outpatients (OPD) or admitted to the ward (IPD) at Sanjay Gandhi Postgraduate Institute of Medical Science (S.G.P.G.I.M.S) and Pediatric Department of King George's Medical University, (K.G.M.U.), Lucknow, Uttar Pradesh, India, were consecutively enrolled. Clinical data were collected from the predesigned questionnaire that was used to record patient information including demographic data, date of onset of symptom, days of illness, travel history and antiviral treatment.

Sample Collection: Nasal / throat swab was collected in 3-4 ml viral transport media (VTM) as per the WHO protocol. Patients were selected as having a respiratory illness like, i.e., Fever >38 ºC, cough, pharyngitis and dyspnea coryza, hoarseness with a duration of illness less than 72 h were included in the study.

Non-cooperative patients or parents in sample collection and inadequate or improper samples (non suitable for laboratory evaluation) were excluded from the study. All the samples were processed immediately and divided into two aliquots, one for cell culture and second for nucleic acid extraction for real-time RT-PCR and molecular testing.

Ethics Statement: The study was approved by the Institutional Ethics Committee (IEC) of the Institute (Ref. No.-XLVIIIECM/B-P15) and written informed consents were obtained from all patients. 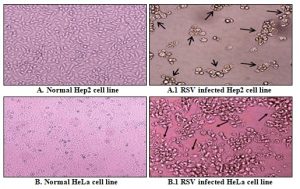 All samples (200 µl) were inoculated on the same day of collection in both cell lines (Hep2 and HeLa cell lines) and incubate at 35 ºC. Cultures were observed daily up to 10 days in the presence of a cytopathic effect (CPE). Syncytia formation was observed as a characteristic CPE in RSV infected cell culture when its compare to negative control Fig. 1A and B. When the CPE had reached 50% or more of the monolayer, the culture supernatant were harvested and stored at -70 °C immediately until use.

RNA Isolation: RNA was extracted using the camp viral RNA mini kit (Qiagen. Valencia, CA, USA) according to the manufacturer’s manual. Briefly, one forty microlitres (140 μl) of clinical samples were used as starting material for RNA extraction and finally eluted in 50 µl of elution buffer. Real-time PCR was done for the confirmation of influenza A, H1N1 and RSV by using a group-specific probe and primer set.

Detection of RSV by Real-Time RT-PCR: Real-Time PCR (ABI 7500 standard) has been carried out with 2 µl of cDNA template in a final volume of 20 µl, containing 10 µl of 2×TaqMan Universal PCR master mix (Applied Biosystems). Primer and probes were taken from conserved regions (N gene) of RSV 10-11. Briefly, 15 pmol of each primer and 5 pmol of the probe labeled with a 5´ reporter dye JOE and 3´ quencher dye BHQ. The thermal conditions were held for 10 min at 95 ºC followed by 45 cycles at 95 ºC for 15 sec and 1 min at 60 ºC. Negative template controls (NTC) were used for the validation of each experiment. A sample was considered positive for RSV if its cycle threshold (CT) value was ≤38 Fig. 2.

FIG. 2: AMPLIFICATION GRAPH (A, B) OF REAL-TIME PCR FOR DETECTION OF RSV

Detection of RSV by Conventional RT-PCR: The primers for external PCR and semi-nested PCR amplification were taken from conserved regions of the G and F proteins genes 12. To perform the PCR amplification, 2 µl of cDNA was taken in a final volume of 20 µl.

Every reaction volume contained 20 pmol-each of primers F164 and G32, 200 mM deoxynucleoside triphosphate mix, 2 mM MgCl2, and 2.5 U of Taq polymerase (Thermofisher Scientific). The reaction was continued till 40 cycles of amplification having denaturation at 94 °C for 1 min, annealing at 55 °C for 1.5 min, extension at 72 °C for 1.5 min, followed by a final extension for 7 min. The product size of ≈1.1 KB in the PCR machine was seen on a 1% agarose gel which is stained with ethidium bromide Fig. 3A. 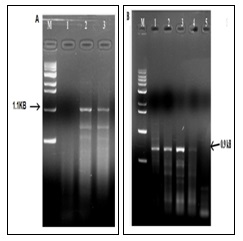 Seminested PCR: The diluted external PCR products were used as a template and same condition were applied with 30 cycles but different primer set, i.e. G267 primer for group A and G399 for group B with antisense primer F164. The PCR products of group A was ≈ 0.9 kb, and group B was ≈0.78 kb in size Fig. 3B.

TABLE 1: PROPORTION OF SAMPLES POSITIVE OR NEGATIVE BY THREE TECHNIQUES

Data are shown as number (% of data no.); P= comparisons were made using chi-square or Fisher’s exact test for categorical variables. *= shows the statically significant difference. (P<0.005) 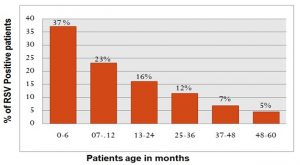 Fever, cough and fast breathing were common clinical signs and symptoms among all enrolled patients.  But severe complication like bronchiolitis and pneumonia were frequently present in RSV positive cases Table 3 and led to hospitalization. In RSV positive cases, infant age group (0-24 months) were more often diagnosed with bronchiolitis than pneumonia (65.3%, 30.7%, respectively) in contrast patients of other age groups (25-60 months) were mostly diagnosed with pneumonia than bronchiolitis (70.5%, 23.5% in 36- 60 months, respectively).

Data are shown as number (% of data no.); P = comparisons were made using chi-square or Fisher’s exact test for categorical variables. *= shows the statically significant difference. (P< 0.005)

DISCUSSION: Viral isolation in cell cultures continues to be considered the most definitive test for diagnosis 13. However, it is not suitable as a routine diagnostic test, because culture usually takes 2-10 days to yield results and technical expertise needed; therefore, its clinical value is limited. Later on, direct viral antigen detection method has been introduced in the routine laboratory setting to overcome these limitations. These techniques provide results faster, but they are generally considered to be less sensitive and specific than cell culture 9. Later on, conventional PCR was introduced and found to have significantly more sensitivity and specificity than immunofluorescence (IF) and cell culture for the diagnosis of RSV. However, the use of conventional PCR should provide the means to perform accurate epidemiological and molecular studies.

The present data confirm the low sensitivity of viral culture and indicate that conventional PCR represents a significant improvement over culture. The ability to diagnose active infection nearly doubled from 5.8% with culture alone to 10.1% with conventional PCR. Thus, forecasts of disease burden based on conventional viral culture alone are liable to underestimate true infection rates. However, conventional cell culture will remain important for selected uses not yet amenable to conventional PCR-such as strain typing, subtyping, and antigenic characterization.  Timely diagnosis is important for immunocompromised persons, who may benefit from anti-virals and immunoglobulin therapy 9. Rapid diagnosis of RSV may also be useful for the elderly or hospitalized patients, and discrimination from influenza can be achieved. Diagnosis of RSV by conventional PCR is a 2-day procedure. Therefore this technique is replaced by real-time RT-PCR which is rapid, sensitive and making a same-day diagnosis. In general, real-time RT-PCR is more sensitive than conventional PCR and cell culture for detection of RSV 14. It allows for successful RSV testing during the first days of illness enables the physician to make the best decision regarding treatment for the child and prevent the spread of infection especially within health care facilities. However, the downfall of this technique is the expense and that it is not currently available in many clinical settings, especially in developing countries 14.

The rate of RSV infection was significantly higher among children aged 0-6 months old, which is by other studies 15, 16. However, RSV is most common in younger children of age below 10 years 7, 8, 17; it's also similar to our previous study 3. Our result was consistent with a study conducted in the US which shows that RSV was responsible for 1% child hospitalization, 70% of which during the first year of life 18. In the present study, the overall incidence rate of RSV was higher than similar studies reported from Kolkata (10.3%) 19, Assam (7.9%) 20 but lower than Delhi 17% 21. This could be due to the difference in risk factor exposure, socio-cultural and other economic factors present in various geographical regions.

According to Durani et al., (2008) the combination of cough, wheezing commonly seen among children hospitalized were predictors for RSV infection 22. The result of our study similar to the recent study from of Cape Town 23 presenting symptoms was cough (86.7 %), fever (41.6%) and difficulty in breathing (115, 50.9%).

Some limitation of the study is worth mentioning; first, we have no data for the sub-typing of RSV. Second, we have not been able to estimate the regional and geographical condition which may be important for prevalence and morbidity rate.

CONCLUSION: We observed that RSV is a substantial cause of hospitalization among children aged 0-60 months and especially among infants aged 0-6 months. In terms of clinical manifestation bronchiolitis and pneumonia were significantly higher in RSV positive cases (P<0.005). These data will help develop public health strategies and interventions mainly targeting young children to reduce the overall RSV-associated morbidity and mortality.

We also conclude that Real-time PCR is a rapid and sensitive technique and may replace the conventional technique for early clinical diagnosis. However, cell culture and conventional PCR will remain important for molecular epidemiology studies.

ACKNOWLEDGEMENT: This work was supported by financial grants from the Indian Council of Medical Research, Government of India, New Delhi (Ref no: 80/773/2012-ECD-I). The authors acknowledge Mr. V. K. Mishra for technical support.

CONFLICT OF INTEREST: The authors have declared that no competing interests exist.