INTRODUCTION: Metoprolol tartrate is a antianginal with a view to provide a convenient means of administrations to those patients suffering from difficulties in swallowing such as pediatric, geriatric, uncooperative and patients suffering from angina pectoris1. Oral bioavailability of metoprolol tartrate is around 40 % 2. The present work enhance the dissolution will lead to improves the bioavailability of metoprolol tartrate (MT). The rate of dissolution can be increased by increasing the surface area of available drug by various methods (micronization, complexation and solid dispersion)3. The dissolution of a drug can also be influenced by disintegration time of the tablets. Faster disintegration of tablets delivers a fine suspension of drug particles resulting in a higher surface area and faster dissolution.

Now a day fast dissolving tablets are gaining more importance in the market. Currently these tablets are available in the market for treating many disease conditions. More is concerned on hypertension4, migraine5, dysphasia6, nausea and vomiting7, Parkinson’s disease8, schizophrenia9, pediatric emergency10. These conditions are those which require the drug to be formulated as fast dissolving tablets. Some patient prefers fast dissolving tablets to conventional tablets best of ease of administration, swallowing, pleasant taste and the availability in several flavors11. The pediatric and geriatrics patients are of particular concern. To overcome this, dispersible tablets12 and fast-disintegrating tablets13 have been developed. Most commonly used methods to prepare these tablets are; freeze-drying/Lyophilization14 tablet molding15 and direct-compression methods16. Lyophilized tablets show a very porous structure, which causes quick penetration of saliva into the pores when placed in oral cavity14, 17. The main disadvantages of tablets produced are, in addition to the cost intensive production process, a lack of physical resistance in standard blister packs and their limited ability to incorporate higher concentrations of active drug12.

Moulded tablets dissolve completely and rapidly. However, lack of strength and taste masking are of great concern18. Main advantages of direct compression are low manufacturing cost and high mechanical integrity of the tablets19. Therefore, direct-compression appears to be a better option for manufacturing of tablets. The main objective of present work was to develop fast dissolving MT tablet by direct compression method and to study the effect of functionality differences of superdisintegrants on the tablet properties.

Preparation of fast dissolving tablets of MT by direct compression method: Fast dissolving tablets of MT were prepared by direct compression. All the ingredients were passed through 60-mesh separately. Then the ingredients were weighed and mixed in geometrical order and compressed into tablets of 200mg using 8mm round flat punches on 10-station rotary tablet machine (Rimek). A batch of 30 tablets of each formulation was prepared for all the designed formulations. Different formulations compositions are given in (Table 1).

Pfizer hardness tester was used for the determination of the hardness of tablets.  Tablet was placed in contact between the plungers, and the handle was pressed, the force of the fracture was recorded. The thickness and diameter of 4 tablets (2 tablets from each batch) were recorded during the process of compression using calipers (Mitotoyo; Japan).  For weight variation13 twenty tablets were selected randomly from each formulation and weighed individually using a Shimadzu digital balance (BL-220H).  The individual weights were compared with the average weight for the weight variation. The friability of a sample of twenty tablets was measured using a USP type Roche friabilator (Pharmalab, Ahmedabad, India).  Pre-weighed tablets were placed in a plastic chambered friabilator attached to a motor revolving at a speed of 25 rpm for 4 min.  The tablets were then dusted, reweighed and percentage weight loss (friability) was calculated. Drug Content Uniformity14 , ten tablets were weighed and pulverized to a fine powder, a quantity of powder equivalent to 10 mg of metoprolol tartrate was extracted into distilled water and liquid was filtered (0.22 mm membrane filter disc (Millipore Corporation). The metoprolol tartrate content was determined by measuring the absorbance at 223 nm (using UV-VIS spectrophotometer, Shimadzu 1700) after appropriate dilution with distilled water. The drug content was determined using standard calibration curve.

The mean percent drug content was calculated as an average of three determinations. . In the Disintegration time15 study one tablet was placed in a beaker containing 10 ml of pH 6.8 phosphate buffers at 37 ± 0.50 C and the time required for complete dispersion was determined. In wetting time16 study, twice folded tissue paper was placed in a petri dish having an internal diameter of 5 cm containing 6 ml of water. A tablet was carefully placed on the surface of the tissue paper in the petri dish.  The time required for water to reach the upper surface of the tablet and to completely wet it was noted as the wetting time. Water absorption ratio (R) was then determined according to the following equation:

Where, wb and wa were tablet weights before and after water absorption, respectively.

The in-vitro dissolution study was carried out in the USP dissolution test apparatus (Electrolab TDT - 08 L Dissolution testers USP) type 2 (paddle). 900 ml of the dissolution medium phosphate buffer pH 6.8 was taken in vessel and the temperature was maintained at     37 ± 0.50C. The speed of the paddle was set at 50 rpm. 5 ml of the dissolution medium was withdrawn and the same amount of fresh medium was replenished to the dissolution medium. The samples were filtered through 0.22 m membrane filter disc and analyzed for drug content by measuring the absorbance at 223 nm.  Drug concentration was calculated from the standard calibration curve and expressed as cumulative percent drug dissolved.  The release studies were performed in replicates of three. The stability study of the tablets was carried out according to ICH guidelines at 40 ± 20C/75 ± 5% RH for three months by storing the samples in stability chamber (Lab-Care, Mumbai). The optimized tablets were selected for stability studies. At intervals of 1 month, the tablets were visually examined for any physical changes and evaluated for changes in drug content and in-vitro dispersion time.

DSC studies:  DSC scan of about 5mg accurately weighed MT and tablet mixtures were performed by using an automatic thermal analyzer system (DSC60, Shimadzu Corporation, Japan). Sealed and perforated aluminium pans were used in the experiments for all the samples. Temperature calibrations were performed using indium as standard. An empty pan sealed in the same way as for the sample was used as a reference. The entire samples were run at a scanning rate of 10°C/min from 50-300°C. 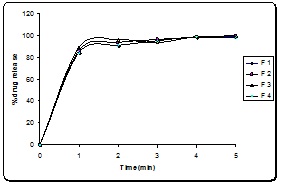 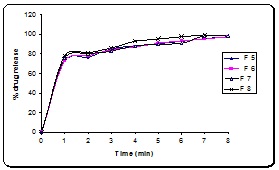 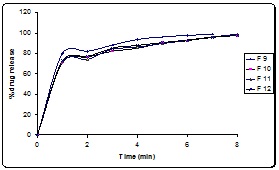 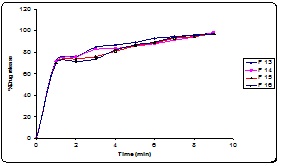 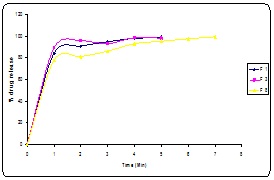 IR (KBR) cm-1: OH absorption at 3454 which is the normal range of absorption band for aliphatic hydroxyl group. Secondary immine (NH) has given a weak absorption in the form of a hump. Merged with aromatic C-H at 3030 and aliphatic C-H of CH3 and OCH3 at 2980. The C-O absorption is found at 1589 merged with C=C of aromatic. These data are in support of the structure of the drug taken for study.

When this drug is taken along with Indion 414 and prepared a tablet to know what will be the interaction between the drug and the Indion 414. The IR revealed the factor that the hydrogen binding has taken place between the drug OH group and C=O of Indian 414 which has resulted into shifting of peak for OH from 3454 to 3400 the NH absorption has given a absorption peak at 3290. Other absorption peaks from the drug have remained unaffected. However C=O of Indian 414 which is part of the tricyclic ring system has shown a strong absorption at 1735.

Hence one of the C=O has undergone hydrogen bonding with the drug to give rise to adduct which is not a chemical reaction product. This hydrogen bond can undergo cleavage during metabolic process. The same drug Metoprolol tartrate is taken with CCS for tableting the tablet will prepared is subjected for IR reading. Which has shown presence of all the absorption peaks of drug along with a strong C=O of carboxylic cluster peak at 1734. It is clear from these observations that tablet that we obtain is a physical mixture containing -H bonding between drug and the CCS. Thus the conclusion from the IR spectra of the drug and formulations is that there is no interaction between drug and polymer. 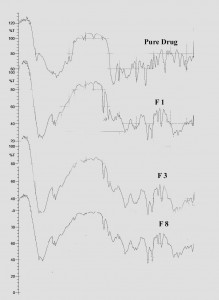 In DSC study when the drug MT is taken to study its properties at higher temperature it has exhibited melting peak at 1230C with very little variation with the literature reported temperature. This is probably due to the error in experimental determination. When the tablet containing drug and CCS is taken for same parametric determination it has started melting slowly at 1620C to 1670C since tablet contains mixture of the drug and ‘CCS’ in almost equiproportion which has resulted in a physical mixture. Suppose if it is a reaction product it should have shown sharp melting range having melting at a particular degree Celsius. It is a physical mixture and also ‘CCS’ is a sodium salt of the carboxylic acid because of these two factors large range of variation has been observed. In our next experiment when the tablet is prepared from pure drug and the Indion 414 the observations made during is observed since it is a mixture of two organic molecules. 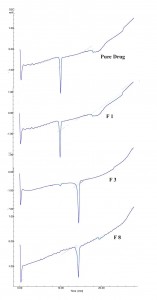 ACKNOWLEDGEMENTS: Authors thank Emcure Pharma. Ltd., Pune for providing a gift sample of Metoprolol tartrate and Cipla Pharma. Ltd. Vikroli, Mumbai for providing a gift sample of super- disintegrants. The authors are thankful to Dr. M. A. Mujeeb, Chairman, and Prof. Syed Sanaullah, Principal, Luqman college of Pharmacy, Gulbarga for his valuable support and providing facilities to carry out this research work. The authors also thankful to Dr. M. G. Purohit, Emeritus Professor, Luqman College of Pharmacy, Gulbarga for their valuable suggestions in carrying out this research work.