INTRODUCTION: Red rice occurs as wild, weedy, or cultivated types with its kernels covered with dark or light-colored husk 1. Both weedy and cultivated rice are evolved from wild Oryza species. Weedy rice of several Oryza species has been in existence, for many years in the vast areas of rice culture in Asia. Weedy rice can be defined broadly and generically as plants of the genus Oryza that infests and competes with rice and other crops.

Out of weedy rice, red rice reported being dominant 2. The weedy rice is morphologically similar to the cultivated rice in plant and seed characteristics as they share a common gene pool with cultivated rice. Out of the various species of wild rice, the spices known to occur in India include Oryza granulata, O. officinalis, O. rufipogon, and O. nivara. Oryza rufipogon and O. nivara are red pigmented spices used as food and medicine in their native places of their cultivation 3.

The consumption of colored rice varieties is being related to improvement in human health. Due to their antioxidant potency and presence of phenolic compounds, they are classified as functional foods 4. Along with its antioxidant properties red rice also a good sources of carbohydrate (75%) and constitute around 28.5% starch 5.

It is the most abundant polysaccharide after cellulose and is deposited in partially crystalline granules differing in molecular structure and morphology among and within plant species. Starch is the only qualitatively important digestible polysaccharide and has been regarded as nutritionally superior to low molecular weight carbohydrates 6. It is mainly composed of two components: amylose and amylopectin which contribute about 98-99% of the dry weight usually named as “normal” starches; some starches contain high amylopectin levels (98-99%) and are known as “waxy” starches; and third group includes starches having higher percentage of amylose contents (50-70%) 7. These two starch polymers mainly contribute an important functional role in various food and other industries such as binding and thickening agents, filling and gelling agents, clouding, emulsifier agent, as a dusting powder in cosmetics, for sugar coating in confectionary, expedient for pharmaceutical and photographic paper powder 8. Nowadays, the interest in rice starch has increased due to its numerous characteristics: white color, easily digestible, hypoallergenic, odorless, and small granular form. These characteristics allocate various applications of starch, in food and non-food industries 9. Extensive research has been carried out by various researchers on starch obtained from commercially important sources such as cereals, legumes, and tubers; however, no work is reported on starch from weed rice. Therefore, the present study was carried out to isolate starch from weed rice and study of its physicochemical, thermal, morphological and X-ray diffraction properties.

Materials: Weed rice was collected from the local market of Sirsa, India. All chemicals used are of analytical grade.

Starch Isolation: Starch was isolated from both weed rice and rice by following the alkali extraction method as described by Sodhi and Singh, (2003) 10. Milled rice was steeped in 5 to 6 volumes of sodium hydroxide (0.2-0.3%) solution at 25 °C for 24 h to soften the endosperms. The steep liquor was drained off and the endosperms were ground lightly in successive small fractions with a mortar and pestle. The slurry was then diluted to the original volume with NaOH (0.2-0.3%).

The mixture was stirred for 10 min and allowed to settle overnight. The cloudy supernatant was drained off, and the sediment was diluted to the original volume with NaOH solution. The process is repeated until the supernatant becomes clear and gives a negative reaction to the biuret test for protein. Starch was suspended in distilled water, passed through a 100-200 mesh nylon cloth, and repeatedly washed with water until the supernatant no longer showed any pink color with the phenolphthalein. The slurry was centrifuged in wide-mouthed cup centrifuge (Remi, New Delhi, India) at 3000 rpm for 10 min and the upper non-white layer was scraped off. The white layer was re-suspended in distilled water and re-centrifuged 3-4 times. The starch was then collected and dried in an oven (NSW-143, New Delhi, India) at 45 ºC for 12 h.

Amylose Content: Amylose content of the isolated starches was determined by using the method of Williams et al., (1970) 11.

Light Transmittance (%): Transmittance of weed rice and rice starches were measured in triplicate, as described by Perera and Hoover, (1999) 13. A 1% aqueous suspension of starch from each sample was heated in a water bath at 90 °C for 1 h with constant stirring. The suspension was cooled for 1 h at 30 °C. The samples were stored for 6 days at 4 °C in a refrigerator, and turbidity was determined every 24 h by measuring absorbance at 640 nm (Thermo Scientific, GENESYS 10S UV-VIS, Spectrophotometer).

Pasting Behavior: The pasting measurements were carried out using a starch cell of Modular Compact Rheometer (Model -52, Anton Paar, Austria) by following the method described by Thory and Sandhu, (2017) 14. After sample loading in the starch cell, temperature was maintained at 50 °C for 1 min. It was then increased from 50 °C to 95 °C at a heating rate of 6 °C/min. The test temperature was kept at 95 °C for 2.7 min. Finally, it was decreased back to 50 °C at same rate. The sample was held at 50 °C for 2 min.

Differential Scanning Calorimetry (DSC): Thermal transition properties of weed rice starch were measured by a model Q10 differential scanning calorimeter (TA Instrument, New Castle, USA). Starch (3.5 mg, dry weight) was loaded into a 40 ml capacity aluminum pan and distilled water was added with the help of Hamilton microsyringe to achieve a starch-water suspension containing 70 g/100 g water. Samples were hermetically sealed and allowed to stand for 1 h at room temperature before heating in DSC. DSC scanning was performed from 40 °C to 100 °C at a heating rate of 10 ºC/min under dry nitrogen purge of 50 ml/min. An empty pan was served as a reference.

Statistical Analysis: The data reported in the tables were carried out in triplicate. The standard deviation (SD) value was calculated and the data was subjected to one-way analysis of variance (ANOVA) using Minitab Statistical Software version 14 (Minitab, Inc., State College, USA).

Swelling power and solubility depends on amylose to amylopectin ratio, their structure, length of branching and distribution, and degree of granulation 20, 21. Swelling power and solubility provide evidence of the magnitude of the interaction between starch chains within the amorphous and crystalline domains and is influenced by the ratio of amylose to amylopectin 22.

Thermal Properties of Starches: Differential Scanning Calorimetry (DSC) is a widely applied technique for many thermal studies in starches that can give the information of transition temperatures during gelatinization and enthalpy change of starch (ΔHgel) 25. Fig. 1 illustrated a typical DSC thermogram for weed rice starch that gives information of To, Tp, Tc, and ΔHgel values and these parameters are enlisted in Table 1. 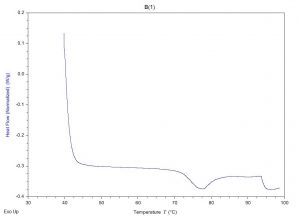 Pasting Properties of Starches: Pasting is a complex phenomenon which specifically refers to the changes in starch during post-gelatinization heating. It includes further swelling and polysaccharide leaching from the starch granules that increase viscosity due to the application of shear force 27. The pasting properties for the weed rice and rice starches were studied by using Rheometer. The results of the pasting properties are reported in Table 3. Peak viscosity (PV) is a measure of the water-holding capacity of the starch in terms of the resistance of swollen granules to shear and the swelling performance of granules 28. Weed rice starch showed PV, TV, and FV values 1111, 919 and 2296cP, respectively. The pasting properties of starches have been reported to be influenced by size, rigidity, amylose to amylopectin ratio and swelling power of the granules 29. The high setback values shown by starch make them unsuitable for food applications where low synthesis rate is required such as in frozen and refrigerated food 30. All these properties are known to influence the product texture and palatability 31.

Lindeboom et al., (2004) 36 attributed the differences in the size of starch granules to biological sources. Starch biosynthesis induces natural variability in amylose and amylopectin molecules, which may be responsible for granule diversity. Other factors that affect granule diversity may include the climate and agronomic processing conditions 37, 38. Sizes and shapes of starch granules have impact in a number of physicochemical, functional and nutritional characteristics as larger granules were developed with high paste viscosity and small granules had higher digestibility 39.

ACKNOWLEDGEMENT: The financial support provided by Chaudhary Devi Lal University, Sirsa (R&S/A-1/2016/66-IV/453-479) in the form of a scholarship to Vinita Sharma is deeply acknowledged.

CONFLICT OF INTEREST: The authors declared that there is no conflict of interest.