In the present investigation, fast dissolving tablets of Carvedilol were formulated by using various natural superdisintegrant like Plantago ovata, Lepidium sativum, Fenugreek and Guar gum. A Direct compression method was used to prepare fast dissolving tablets containing Carvedilol as a model drug using natural superdisintegrants. Prepared formulations were evaluated for Precompression parameters such as micromeritic properties like angle of repose, %compressibility and Hausner’s ratio. Tablets were also subjected to Postcompression analysis for the parameters such as weight variation, hardness, and friability, in vitro disintegration time, wetting time, drug content and in vitro dissolution study. The results concluded that amongst all formulations, the formulation prepared with mucilage of Plantago ovata showed better disintegrating property as well as the release profile than the other used natural superdisintegrant.

INTRODUCTION: Natural gums and mucilages are preferred over semi-synthetic and synthetic excipients in the field of drug delivery because they are cheap and easily available, have soothing action and non-irritant nature. Further, they are eco-friendly, capable of multitude of chemical modifications, potentially degradable and compatible due to their natural origin 1-2. Polymers have been successfully investigated and employed in the formulation of solid, liquid and semi solid dosage forms and are specifically useful in design of novel drug delivery system. Both synthetic and natural polymer have been investigated extensively for this purpose 3. Synthetic polymers are toxic, expensive, have environmental related issues, need long development time for synthesis and are freely available in comparison to naturally available polymers. However the use of natural polymer for pharmaceutical application is attractive because they are economical readily available, non-toxic and capability of chemical modification, potentially biodegradable and few exceptions also biocompatible.

Natural polymers have become a thrust area in majority of investigation in drug delivery system. Natural gums have also been modified to meet the requirements of drug delivery system and thus can compete with synthetic excipient available in the market 5.

Natural Superdisintegrants: Today, we have a number of plant-based pharmaceutical excipients and various researchers have explored the utility of some of these plant-based materials as Pharmaceutical Super-disintegrant. Plant products serve as an alternative to synthetic products because of local accessibility, eco-friendly nature, bio-acceptable, renewable source and lower prices compared to important synthetic products. Majority of investigations on natural polymers for disintegrant activity are centered on polysaccharides and proteins, due to their ability to produce a wide range of materials and properties based on their molecular structures 6. 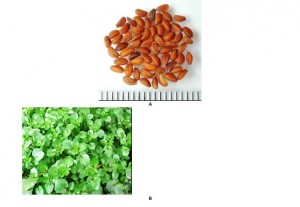 Plantago Ovata: Isapghula Husk consists of dried seeds of the plant known as plantago ovata as shown in fig. 2. The plant contains mucilage in the epidermis of the seeds. Mucilage of Plantago ovata has various characteristics like binding, disintegrating and sustaining properties. Mucilage can be used as superdisintegrant to formulate fast dissolving tablets because it has very high percentage of swelling index (around 89±2.2%v/v) as compared to the other super disintegrating property 8. 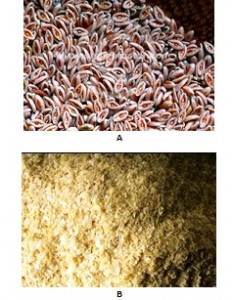 Fenugreek: Trigonella foenum-graceum (family Leguminosae), commonly known as Fenugreek, is an herbaceous plant of the leguminous family. It is one of the oldest cultivated plants and has found wide applications as a food, a food additive, and as a traditional medicine in every region. Fenugreek seeds  as shown in fig. 3, contain a high percentage of mucilage which can be used as disintegrant for use in mouth dissolving tablet formulations. Mucilage is an off white-cream yellow colored amorphous powder that quickly dissolves in warm water to form viscous colloidal solution 8. 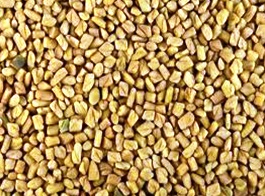 Guar Gum: Guar gum comes from the endosperm of the seed of the legume plant Cyamopsis tetragonolobus. Guar gum is prepared by first drying the pods in sunlight, then manually separating from the seeds. The gum is commercially extracted from the seeds as shown in fig. 4, essentially by a mechanical process of roasting, differential attrition, sieving and polishing. Chemically, guar gum is a polysaccharide composed of the sugars galactose and mannose. The backbone is a linear chain of 1, 4-linked mannose residues to which galactose residues are 1, 6-linked at every second mannose, forming short side-branches 9. 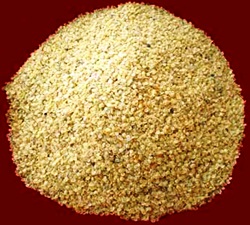 Carvedilol (BCS Class II drug) is a nonselective β-adrenergic blocking agent with α1-blocking activity and it is mainly used in the management of hypertension. Hence, in the present research work FDTs of Carvedilol were prepared by direct compression technique using different concentrations of natural superdisintegrant like Plantago ovata, Lepidium sativum, Fenugreek and Guar gum to study and compare their release rate of prepared formulaion.

MATERIALS AND METHODS: Seeds of Lepidium sativum, Fenugreek and Plantago ovata were purchased from the local market Khari bawli of Chandni Chowk, New Delhi and Carvedilol was obtained as a gratis sample from Ranbaxy Pvt. Ltd., India. Other materials including Guar gum powder and excipients used in study were of pharmaceutical grade.

Preparation of seed powder of Plantago ovata: The dried Plantago ovata seeds were comminuted and sieved through mesh# 80 and stored in desiccator.

Preparation of Fenugreek seeds powder: The dried fenugreek seeds were collected and size reduction was done in the grinder then sieved through mesh # 80 and stored in desiccator.

Preparation of Fast Dissolving Tablets: Fast dissolving tablets containing 200 mg of Carvedilol were prepared by direct compression method, each tablet containing 50 mg of Carvedilol was prepared by using Direct compression as per Formula given in Table 1 and 2. The superdisintegrant Plantago ovata (5%, 10%, 15%), Fenugreek (5%, 10%, 15%), Lepidium sativum (5%, 10%, 15%) and Guar Gum (5%, 10%, 15%) were used in different proportion and in different combination. All the ingredients were passed through sieve # 60 and kept in hot air oven at 60oC to make anhydrous and accurately weighed. The drug, superdisintegrant, MCC, Mannitol were mixed to improve drug distribution and content uniformity and triturated well in a mortar. Then Mag. Stearate and Talc was passed through sieve # 80, mixed and blended well with the initial mixture. The mixed blend of Drug and Excipient was compressed using single Punching Machine to produce tablet weighing 200 mg having diameter 4.5mm, following the procedure twelve batches of MDT of Carvedilol in different ratio of superdisintegrant were prepared.

Evaluation of FDTs 10, 11, 12: The prepared formulations were evaluated for pre‐compression parameters like angle of repose, Hausner’s ratio and compressibility index by Carr’s method. The post-compression parameters such as weight variation, hardness, friability, in vitro disintegration time, wetting time, in vitro dissolution test, stability studies, also have been studied. All the results were taken in triplicates (±3SD). The weight of the FDT being made was measured to ensure that a FDT contains the proper amount of drug.

The USP weight variation test was run by weighing 20 FDTs individually using electronic digital balance, calculating the average weight and comparing the individual FDT weights to the average. The FDTs meet the USP test if no more than 2 FDTs are outside the percentage limit and if no FDT differs by more than 2 times the percentage limit. The weight variation tolerances for FDTs differ depending on average FDT weight. The Monsanto hardness tester was used for the determination of the hardness of FDT.

FDT was placed in contact between the plungers, and the handle was pressed, the force needed to fracture the FDT was recorded.

The friability of FDTs was determined using Roche friabilator. It included the determination of loss in weight of FDTs by placing pre-weighed FDTs in the apparatus and it was allowed to run for 100 revolutions with the speed of 25 rpm and weighed once again. The difference in the two weights represents friability. The weight loss should not be more than one percent. Six FDTs were tested from each formulation.

A stopwatch was used to measure the disintegration time to the nearest second. Only one FDT was analyzed at a time in order to ensure maximum accuracy.

In wetting time study, the FDT was placed in a petridish of 5.5 cm in diameter, containing 10 ml of water at room temperature, and the time for complete wetting was recorded. To check for reproducibility, the measurements were carried out six times and the mean value calculated.

Plantago ovata was effective at concentration, i.e. 15 %. In vitro dissolution study shown in Table 9 and Fig. 9 revealed that (AP3) is an optimized formulation that releases more than 90% of drug within 60min As compared to the formulation of AG12, AF9 & AL6 shown in tables 5, 6 and 7 and Fig. 5, 6 and 7, moreover followed by Plantago ovata, Lepidium than Fenugreek and last in the series is Guar gum with minimum drug release within 60 min as shown in Fig. 9. 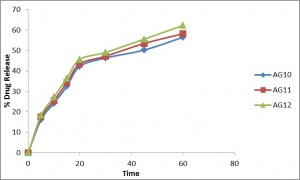 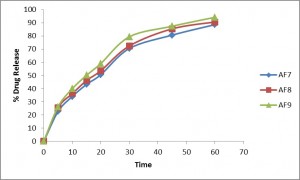 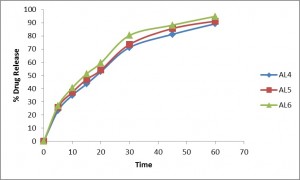 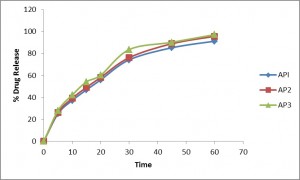 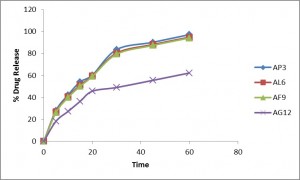