COMPATIBILITY AND STABILITY STUDIES OF AMPICILLIN TRIHYDRATE AND PIPERINE MIXTURE

COMPATIBILITY AND STABILITY STUDIES OF AMPICILLIN TRIHYDRATE AND PIPERINE MIXTURE

INTRODUCTION: Piperine (1-piperoyl piperdine) is a major component of the Piper species. This species has been used widely as spices and in various systems of Indian medicine 1. Piperine has been shown to enhance the bioavailability of drugs like Vascicine, Curcumin, Barbiturate, Oxyphenyl- butazone, Propranalol, Theophylline and Ampicillin 1-7. Ampicillin is extensively used in various bacterial infections 8. The present study was aimed to develop a new concept of inclusion of bioenhancer as a formulation additive by conducting compatibility and stability studies of Ampicillin Trihydrate and Piperine (1:1) mixture.

MATERIALS AND METHODS: Piperine sample was received from M/s Sami labs, Bangalore. The Ampicillin trihydrate was purchased from M/s. MMC Laboratories, Chennai and the sample was found to comply with specifications as per Indian Pharmacopoeia 9.  The test microorganism; Bacillus subtilis (ATCC 6633) was obtained from National Chemical Laboratories (NCL), Pune. The Culture and Assay Media were supplied by M/S Hi-Media Ltd., Mumbai. Differential Scanning Calorimeter (Model DSC 60) was purchased from M/S Shimadzu, Japan.

Compatibility studies: Compatibility studies are an important step in pre formulation studies for developing a dosage form. The Ampicillin Trihydrate-Piperine physical mixture (1:1) was stored in High Density Poly ethylene (HDPE) containers sealed with Teflon. The mixture was subjected to Differential Scanning Calorimetry (DSC) studies [scanning temperature range 35˚C- 275˚C with (10˚C/min. raise)], Thin Layer Chromatography (TLC) studies for Ampicillin 9 and Fourier Transform - Infra Red (FT-IR) studies (scanning between 400 cm-1 and 4000 cm-1) at zero time and one month after storing at 50˚C in an oven 11. The results of the TLC studies are given in Table 1 and the results of DSC and Fourier Transform- Infra Red (FT-IR) studies are presented as figures. (For DSC studies Fig. 1 & 2 and for FT-IR studies Fig. 3 to 6).

Stability studies: Stability studies are also an important part of pre formulation studies. The stability of the drug substance depends upon the container and conditions in which it is stored and other excipients present with the drug.  Since the storage temperature for Ampicillin trihydrate, as recommended by many Pharmacopoeias is around 25˚C, the stability studies for Ampicillin Trihydrate-Piperine physical mixture (1:1), was carried out as per ICH guidelines for General cases of drugs 12.

The mixture was encapsulated in hard gelatin capsule shells, the capsules were then transferred to High Density Poly Ethylene (HDPE) bottles. The mouth of the bottles were then covered with aluminium foil and then closed with a closure. The study was carried out as accelerated study (for 6 months) by storing at 40˚C±2˚C, 75±5% RH (sampling at 0, 1, 2, 3, 6 months) and as long term study (for 1 year) by storing at 25˚C±2˚C, 60±5% RH sampling was done at 0, 3, 6, 9, 12 months .

Sampling: The quantity of mixture equivalent to 50mg of Ampicillin was sampled and 50ml of sterile phosphate buffer (pH 8) was added to dissolve Ampicillin Trihydrate. The resultant solution was filtered aseptically to remove Piperine and diluted suitably with same solvent to get 5μg/ml. of Ampicillin. This solution was used determine the potency of the said antibiotic. The mixture was also observed for changes in physical characters such as color, odor and taste during accelerated and long term stability studies. The results for long term stability studies of the mixtures are given in Table 2 and the results for Accelerated stability studies are given in Table 3. The degradation rate constants were calculated from stability profiles (% potency retained vs. time) and the results are given in Table 4. 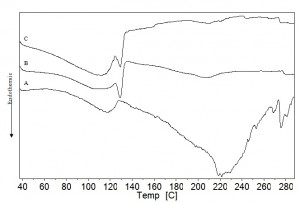 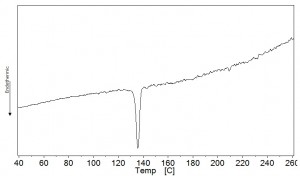 From the thermograms (Fig. 1 & 2), one can infer that there is no interaction between Ampicillin trihydrate and Piperine in fresh as well as in stored mixture. Since Ampicillin was used as trihydrate, it was not giving a sharp endothermic peak corresponding to its decomposing temperature of 202˚C 13. The endothermic peak found in fresh as well as in stored mixture corresponds to the melting range of Piperine (128˚ to 129˚C) 13. So it indicates that Ampicillin and Piperine do not interact immediately upon mixing and even after storage of mixture. 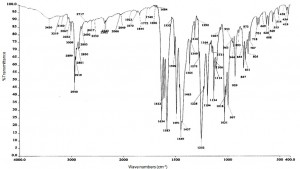 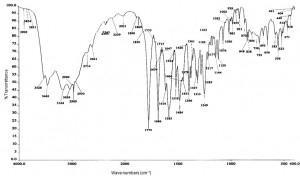 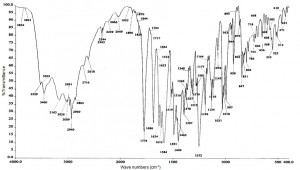 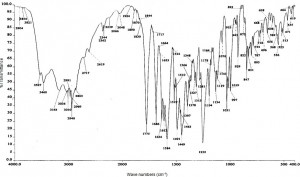 Stability studies: The results of stability studies (presented as tables 2, 3 & 4) show that the mixtures of Ampicillin trihydrate and Piperine are stable during long term study (storage at 25˚C±2˚C, 60±5% RH) and even at accelerated conditions (storage at 40˚C±2˚C, 75±5% RH). The degradation (indicated by decrease in % potency of antibiotics) followed zero order kinetics and the degree of degradation was less than 5%. But there was no change in the physical properties such as color, odor and taste of the mixture. The pungency of Piperine was retained in both long term and accelerated stability studies.

CONCLUSION: From the above studies it can be concluded that Piperine can be used as a formulation additive (Bioenhancer) in oral solid dosage forms of Ampicillin Trihydrate. The inclusion of Piperine as a bioenhancer will result in better oral absorption of Ampicillin and reduction its oral dose. The reduction in oral dose will result in minimal side effects, reduced cost of treatment and improved patient compliance.