ABSTRACT: The experiment was performed at the Department of Pharmacology in collaboration with the animal house Microbiology Department, Bangladesh Agricultural University, Mymensingh during the period from Jan 2005 to May 2005. To complete the research work following steps were followed.The aim of this study was to assess the possible comparative efficacy of Turmeric (Halud), Garlic (Rashun) and Aloe (Ghrita kumari) with Antibiotic Nebanol (Neomycin Sulphate and Bacitracin Zinc) on artificially induced wound in 2.5 cm length and 0.5 cm depth were made on the two thigh muscles an experimental model. Twenty five guinea pigs of both sexes age ranged between 6 to 8 months were divided into five groups (each group containing five animals). The first, second and third groups received herbal medicine e.g.; Turmeric paste, Garlic paste, Aloe gel and fourth group received Antibiotic Nebanol powder (Neomycin Sulphate and Bacitracin Zinc) respectively. The fifth/control groups were observed without medicine. Turmeric, Garlic, Aloe & Nebanol treatment reduced the wound within 12, 15, 17 & 14 days respectively. On the other hand, wound in control group was automatically reduced within 21 days. The present study showed that Turmeric was best effective among all & was found better than antibiotic Nebanol (Neomycin Sulphate and Bacitracin Zinc). It is concluded that among 3 indigenous preparations Turmeric may be used against skin wound because it is less expensive, easily available, having less side effect.

INTRODUCTION: Plants have been an important source of medicine for thousands of years. As per World Health Organization estimates, up to 80 percent of people still depend on traditional remedies such as herbs for their medicines. Today, Ayurvedic, Hoemoeo and Unani physicians utilize numerous species of medicinal plants that found their way a long time ago into the Hindu Material Media 1.

The twentieth century set a trend for introducing a new generation of botanical therapeutics that includes plant derived pharmaceuticals, multi component botanical drugs; dietary supplements, functional foods and plant produced recombinant proteins. Many of these products will soon complement conventional pharmaceuticals in the treatment, and prevention of diseases.

Valerian (Syn: V. jatanamansi) is a member of the Valerianaceae family that includes upto 250 species, commonly called as Indian valerian 2. It is indigenous to the temperate Himalayas and found in India, Bhutan, Burma, Pakistan and Afghanistan. The parts of the plants used for therapeutic purposes are mainly the roots and the rhizomes. It is used in anxiety, insomnia, epilepsy, failing reflexes, hysteria, neurosis and sciatica 2, 3. It is also considered useful as potent tranquilizer, 4 and for hypertension 5. However, its antibacterial and antifungal potential is needed to be explored. The present investigation aimed to evaluate antibacterial and antifungal potential of V. wallichii root and rhizome extracts in various solvents polar. Wound is defined as loss and breaking of anatomic and cellular of living tissue.

Wound healing process is a biological process instigated by trauma and causes scar formation. Wound healing process occurs in few different stages such as coagulation, epithelisation, granulation, collegenation and remodelling of tissue. Wound healing is an active and multifaceted process in restoring cellular structures and tissue layers. The objective of wound management is to heal the wound in express time possible, with very nominal pain, discomposure and scarring in patient with wound. At the   site of closure, a lithe and fine scar with high tensile strength is required. 6 The wound healing property of Curcuma longa, Alium sativum, Aloe barbadensis tree bark extract emerge to be due to the existence of its active principle, tannin which hasten the wound healing course.

From the results attained in present investigation, it is feasible to conclude that the tree bark extract of Curcuma longa, Alium sativum, Aloe barbadensis has significant wound healing activity at the doses tested on excision wound model in animal study. However, further studies should be done to prove the potential of Curcuma longa, Alium sativum, Aloe barbadensis in wound healing using other wound models such as incision and dead space wound.

Methods of Preparation of Unani and Ayurvedic Medicinal Paste:

Before surgery, all the animals were subjected to a thorough clinical examination to ensure that they were in good physical condition and apparently free from infections or parasitic diseases. The operation sites both thighs were clipped, washed with soap and water, shaved and prepared with Iosan (Ciba Geigy, Switzerland Ltd). The sites were desensitized by local infiltration with 2% Jasocaine (Lignocaine hydrochloride, Jayson, Bangladesh Limited). Two incised wounds of 2.5 cm length and 0.5 cm depth were then made on either side of horizontal column following standard surgical procedure. The wounds produced in all experimental groups were kept unsutured.

After making wounds, the guinea pigs were divided into 5 equal groups. Each comprising five animals and marked as group – I, II, III, IV and group V. Animals were maintained carefully so as to avoid interference with the formation of granulation tissue.

Group- I: Paste of Turmeric was applied to the 10 wounds made in 5 animals for twelve days. The paste was used twice daily after washing the wounds by distilled water with the help of sterile cotton.

Group- II: Paste of Garlic was applied to the 10 wounds made in 5 animals for fifteen days.

Group- III: The gel of Aloe leaves was applied to the 10 wounds made in 5 animals for seventeen days.

Group- IV: Antibiotic (Nebanol powder) was applied to the 10 wounds made in 5 animals for fourteen days.

Group- V: No medicine was applied to the 10 wounds made in 5 animals.

Turmeric pastes were more effective than those of garlic, aloe and antibiotic nebanol took 14 days for healing. The garlic paste and aloe showed the different results where healing were completed in 15 and 17 days respectively. The control group took more time than turmeric and garlic paste, gel of aloe and antibiotic and it was 21 days. The characteristic clinical changes at different stages of wound healing with various preparations are shown in Table 4. Moderate exudation occurred on the first day of wound healing. The wounds remained reddish from 3rd to 9th day in all treatments groups. The redness in turmeric paste groups however was more prominent.

In case of garlic paste, aloe gel and nebanol groups, redness were observed from the 3rd to 13th day. But on 9th day, it was more prominent. In turmeric groups, 30-35% of t he wound cavity was filled up at the same time of the treatment. At the 10th day of wounding a strong scab was observed above the wound and 85-95% cavity was filled up when the paste of turmeric was used. At the same time the filling of the cavity in other groups occurred on the 12th to 15th day.

TABLE 1: HEALING TIME OF THE WOUNDS IN VARIOUS TREATMENT GROUPS

The effect of experimental wound on differential count and the individual data are presented in the following Table-6. Among the leukocyte, the noticeable changes were observed in lymphocytes and neutrophils. The mean values of lymphocytes before producing wound in groups I, II, III, IV and V were 63.3± 2.8, 65± 6, 72.6± 2.5, 68± 4 and 69.5± 5 SD percent respectively. These values increase significantly P<.001 to 85± 1 and 83± 3.2, 82.3± 3.2 SD percent on 3rd and 10th day in group I and III respectively. In group II, IV and V after producing wound lymphocytes also increased to 76± 3, 84± 2,79± 2 in 3rd day. 10th day and 14th day also increased respectively. However these changes were not statistically significant.

The changes in eosinophil in various groups at different days were inconsistent and statistically insignificant.

TABLE 4: EFFECT OF THREE SELECTED MEDICINAL PLANTS AND ANTIBIOTIC ON TEC, TLC AND HEMOGLOBIN CONCENTRATION OF EXTERNAL WOUND IN GUINEAPIGS 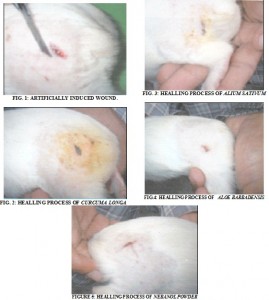 DISCUSSION: Healing of wounds is a part of normal physiological process of the body. Early healing of wound depends on physical and biological conditions of the body silver, 1982. Wounds are the common surgical affections in our livestock. Baseline information suggested that 45.2% cases were external wounds among the surgical problems recorded at Bangladesh Agricultural University, Veterinary Hospital. 8 The wounds are not usually fatal but the affected animals lose their condition rapidly and a marked degradation of the leather quality may occur.

In normal conditions, the primary events in healing process occur smoothly. Sometimes, the new tissue is not completely identical to the original due to natural or other causes sometimes the normal healing process may be inhibited or disrupted. During this condition the veterinary surgeons are mostly concerned in the field. Before the uses of drug, the farmer in the treatment of external wounds extensively uses many herbal preparations in the rural area. In fact the rural farmers who are mostly ignorant about the primary health care of their animals.

In the present study experimental skin wounds were produced artificially in the Guinea pigs and the sequence of the events during wound healing were studied. The results showed that experimentally induced skin wounds in guinea pigs have no statically significant or marked effect on rectal temperature, pulse and respiration rates 9

In the hematological study of different counts of leukocytes, significant leukocytosis was observed in medicinal plants treated group antibiotic group and control groups. Found leukocytosis during experimental wound in sheep and cattle. In Nebanol powder treated group insignificant leukocytosis was observed which might be due to the effect of antibiotics against wounds. The possible explanation of this effect may be that external wounds causes leukocytosis but this may be inhibited due to antibiotic therapy. Leukocytosis is the indication of inflammatory process, which is essential for healing mechanism. Increased level of leukocytosis also produces various enzyme, which destroy the host cells and may further perpetuate the condition and delay wound healing 10

The wound inflicted in the present experiment reminded exposed. The relatively larger healing time may be associated with the wound exposure, resulting the increase dehydration of both the wound edges and the base and so lead to greater local tissue death and enlarged scab formation and a slower rate of epithelization. Epithelixation is accompanied by the laying down scar tissue, which is composed of collagen tissue and is devoid of nervous tissue, sweat glands, sebaceous gland and hair follicles 11 The wounds remained reddish from 3rd to 9th day. This indicated the formation of granulation tissue, which restores the wound gap. The wound cavity was filled up in between 9 and 21 days in various treatment groups and these were similar with the findings of Pandey and Ghani 1986.

During wound healing species variation showed marked difference die to external environmental factors and in addition they show an individual idiosyncrasy. Poor or high level of nutrition and in specific protein deficiency may cause delayed healing. The rise of skin temperature enhances epithelial regeneration and in regeneration of fibroblast elements in the sub-epidermal tissues Silver, 197312

Different types of mechanical disturbances to the wound surface may disrupt the configuration of cells to re-establish continuity across a gap. Movement may cause damage to regeneration epithelium by rubbing it against a dressing and it may also mechanically interfere with the laying down of collagen fibers. After about 12 hours of incision epithelial regeneration started, if the condition are favorable. Epithelial restoration may take place at the rate of up to 2mm a day 13

In the present study, turmeric Halud paste was found best 12 days in wound healing than two other plants paste and gel and a patent drug Nebanol. However, reported that wounds on rats treated with aloe vera gel healed faster than the wound treated with 2% Mupirocin ointment, 1% Clindamycin cream and 1% Silver sulfadiazine cream.

During this research all extract and ointments were preserved in the refrigerator and was used in various time. However, identification of the active principle of the plants was not done in this study because of insufficient laboratory facilities. Similarly, micro filtration of the plant extract and its subsequent microbial culture sensitivity was not performed. So these works may be performed in future.