COMPLEXES OF COBALT(II), NICKEL(II) AND ZINC(II) WITH SCHIFF BASES DERIVED FROM 4-ANISALDEHYDE

COMPLEXES OF COBALT(II), NICKEL(II) AND ZINC(II) WITH  SCHIFF BASES DERIVED FROM  4-ANISALDEHYDE

Co(II), Ni(II) and Zn(II) complexes of Schiff bases derived from condensation of  4-anisaldehyde with anisidine, (AAN) or 2,4 dinitrophenylhydrazine ,(ADN) have been prepared in 1:2 molar ratio (metal:ligand). The compounds have been characterized using elemental analysis, electronic spectra, infrared and molar conductance measurements. The infrared data revealed that the ligand, AAN behaved as a tridentate ligand. It coordinated to the metal ions via the N and two O atoms of the ligand. ADN  behaved as a bidentate ligand coordinating through the O and N atoms of the ligand. The electronic spectral data indicates that the compounds are six coordinate. The molar conductance values showed that the complexes are non-electrolytes. The compounds were screened in vitro for antibacterial activity against some pathogenic bacteria: Escherichia coli, Pseudomonas aeruginosa, Salmonella typhi, Bacillus subtilis and Staphylococcus aureus using the agar-well diffusion method. The synthesized Schiff base complexes exhibit higher antibacterial activity against the tested pathogens compared to the free Schiff base because of chelation.

INTRODUCTION: Literature survey has indicated that Schiff bases are excellent coordinating ligands 1, 2.  They form stable complexes with different transition metal ions. Schiff bases and their metal complexes are well known for their pronounced biological activities 3-5. They have many antibacterial, antifungal and anticancer properties. Transition metal complexes have been the subject of discussion for the past many decades6.Many workers have reported that activity have been found to be highly dependent on the nature of the metal ion and the donor atoms of the ligands since different ligands show different biological properties, though they may vary slightly in their molecular structures 7-8. It has been reported that 2,4 dinitrophenylhydrazine is an analogue of hydrazine and an important class of drugs 9.

Some workers have also reported that Schiff bases derived from acetlyacetone and p-anisidine showed great activity against some bacteria like Staphylococus aureus, Bacillus sublitis, Escheriachia coli and Fungi, Aspergillus niger 10.

In view of the above facts, we have previously reported the synthesis and antibacterial properties of some Schiff base metal(II) complexes 11.

In continuation of our research work, we have reported in this study, the synthesis, characterization and antibacterial properties of two Schiff bases derived from 4-anisaldehyde and their transition metal(II) complexes.

Materials and Methods: All chemicals and solvents used were of Analar grade and were used as supplied. Metal(II) salts were used in the form of their chlorides. Microanalysis was done by the use of Perkin Elmer model 2400 series 11 CHNS/O Elemental Analyzer. The metal ions were determined titrimetrically 12. Infrared were recorded on FTIR- 84005 spectrophotometer using Nujol mulls in the range 4000-500 cm-1. Electronic spectra were studied on UV/Vis Spectrophotometer in the range 200-700 nm using DMF as solvent.

Conductivity measurements were done using a conductivity meter 160 Orion. All melting points were taken on a Gallenkamp melting point apparatus and were uncorrected. Antibacterial studies were carried out with the help of the Microbiology Laboratory, Department of Veterinary Microbiology, University of Maiduguri, Nigeria. The ligands and the metal(II) complexes were  screened in vitro for their antibacterial activity against four Gram-negative( Escherichia coli, Pseudomonas aeruginosa, Salmonella typhi and Shgella flexeneri), and two Gram-positive (Bacillus subtilis and Staphylococcus aureus) bacterial strains by the agar –well diffusion method 13.

Synthesis of the Schiff Base ligands: The Schiff bases were synthesized as previously described 11, 14, 15. This was done by condensation of the 4-anisaldehyde (3mmol, 0.409g) with anisidine (3mmol, 0.369g) or 2, 4-dinitrophenylhydrazine (3mmol,0.594g)  in a methanolic solution (1:1) molar ratio to give AAN and ADN respectively. In a typical reaction, the mixture was refluxed for one hour after which it was cooled to room temperature. The product formed was filtered and washed with 3x5ml portions of ethanol and dried over anhydrous CaCl2 in a dessicator.

Synthesis of the Metal Complexes: The complexes were synthesized in 1:2 molar ratio of metal:ligand. To a solution of each of the Schiff base ligands (AAN or ADN) in 10ml methanol, 3mmol of NiCl2.6H2O, CoCl2.6H2O or ZnCl2 in another 25ml methanol was added with stirring. The mixture was refluxed for 2 hours using a hot plate magnetic stirrer, after which it was allowed to cool at room temperature and the product formed was filtered and washed with 3x5ml portions of methanol and stored in a dessicator containing anhydrous CaCl2.

Antibacterial activity: Synthesized Schiff bases and their corresponding metal complexes were screened against some Gram negative and Gram positive bacteria to assess their potential as antibacterial agents by the agar well diffusion method.13. The wells (6mm in diameter) were dug in the media with the help of a sterile borer with centers at least 24 mm apart (NCCLS, 1990). The concentration of the test samples (1mg/ml in DMSO) was introduced in the respective wells. The plates were incubated immediately at 37 ͦ C for 24 hours. Activity was determined by measuring the diameters of the zones of inhibition. The measured zones of inhibition against the growth of various bacterial strains are listed in Table III.

RESULTS AND DISCUSSIONS: The two Schiff bases were synthesized as described above. The Co(II), Ni(II) and Zn(II) metal complexes were synthesized by refluxing the metal(II) chlorides and the ligands in 1: 2 molar ratio of metal: ligand. The structures of the Schiff base ligands and the metal complexes were established with the help of their infrared, UV/Vis, microanalysis and conductivity measurements (Figures 1 & 2). The physical properties of the complexes are presented in Table 1. The complexes showed various shades of colors. The % yield of the ligands and the compounds are in the range 70-94%. The compounds have sharp melting points with the exception of ZnCl2(ADN)2 which decomposed at 249-251oC. The molar conductance of the complexes in dimethylformamide is in the range 7.45-17.70 Scm2mol-1 indicating that the complexes are non.electrolytes 16. Microanalytical data have revealed that the complexes analyzed as M(AAN)2 or MCl2(ADN)2, indicating that they are all anhydrous (Table 1). The general equations leading to the formation of the metal complexes are given below:

Where M= Co(II), Ni(II) or Zn(II) , AAN = Schiff base derived from 4- anisaldehyde and anisidine 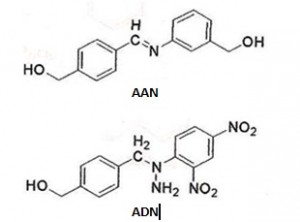 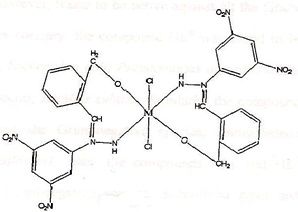 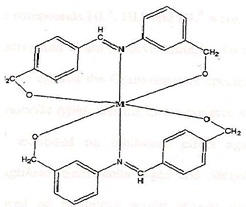 Infrared: The infrared data of the ligands and metal complexes are presented in Table 2. The infrared spectra of the ligands showed bands in the range 1618-1616 cm-1 which are attributable to υ C=N  band. This band is shifted to lower frequencies 1606-1604cm-1 in the complexes. This indicates involvement of the azomethine nitrogen in bonding 17-20. The broad band at 3580cm-1 in the free ligand, AAN, which is absent in the spectra of its corresponding complexes is assigned to υ O-H stretching frequency in the ligand. This indicates deprotonation and involvement of the hydroxyl oxygen in complexation 14.

The coordination through nitrogen of azomethine and oxygen of  υ C-O group of AAN and ADN and their complexes are further evidenced by the appearance in the complexes of low frequency non-ligand bands around 550-530cm-1 and 455-450cm-1 assigned to υ M-N and υ M-O respectively 17-20. These bands are absent in the ligands. υ M-Cl  could not be observed in the complexes prepared from ADN due to instrument limitation.

The proposed structures however agree with microanalysis results. The characteristics absorption bands in the 1332 and 970 regions in ADN are assigned to υ NO2 and υ N-N vibrations respectively 21.The band for υ NO2 were unchanged in  two of the complexes  while that for  υ N-N were shifted to lower frequencies. This indicates that  υ NO2 was not involved in bonding.

Electronic Spectra: The UV/Vis was determined in DMF in the range 200-700nm and the data are presented in Table 2. The assignments have been done by comparing the observed values with previous work done on similar systems 11, 21. In all the compounds, the bands are in the range 47.62 and 44. 84kk are due to π-π* transitions of the ligands. The electronic spectra of the cobalt(II) complexes  showed  broad bands at 14.88kk and 15.11kk respectively assigned to 4A1g-4T2g of an octahedral geometry. The band at 14.93kk observed in NiCl2(ADN)2 is due to 3A2g-3T1g  transition of an octahedral geometry.  The electronic spectra of the Zn (II) complexes showed absorption bands at 22.73kk and 34.35kk attributed to the LMCT transition, which is in conformity with the octahedral geometry of these complexes.

Antibacterial Activity: The Schiff bases and their corresponding metal complexes were screened against Gram-negative (Escherichia Coli, Pseudomonas aruginosa, Salmonella typhi and Shigella flexneri) and two Gram-positive (Bacillus subtilis and Staphylococcus aureus) bacterial strains to assess their potential as antibacterial agents by the agar-well diffusion method. Activity was determined by measuring the diameter of the zones of inhibition (mm) and these are presented in Table 3. It is found that the metal complexes have higher antibacterial activity than the free ligands as previously reported. Hence, chelation increases the antibacterial activity 11, 18, 22.

TABLE 2: INFRARED AND ELECTRONIC SPECTRAL DATA OF  LIGANDS AND COMPLEXES

TABLE 3: ANTIBACTERIAL ACTIVITY  OF THE LIGANDS/COMPLEXES

CONCLUSION: The complexes are all air stable and are anhydrous. Infrared studies have shown that AAN coordinated as a tridentate ligand and ADN as a bidentate ligand. Electronic spectral measurements have suggested that the complexes have octahedral geometries and are six coordinate. Elemental analysis data have revealed the stoichiometric compositions for the complexes as 1:2 molar ratio (metal:ligand).  Antibacterial studies have indicated that the complexes show higher activities than the free ligands. The proposed structures of the ligands and their metal(II) complexes are given in Figures 1 & 2 respectively.

AKNOWLEGEMENTS: The authors are grateful to the authorities of the University of Maiduguri, Nigeria for their technical support. We also wish to thank Prof Kolawole G.A. for the microanalysis which was done in South Africa.