COMPLEXES OF COBALT(II), NICKEL(II) AND ZINC(II) WITH SCHIFF BASES DERIVED FROM 4-ANISALDEHYDE

A new spectrophotometric method is developed for the determination of artesunate (ARTS) in pharmaceutical preparation and bulk drug. The method involved heat-catalyzed derivatization of the drug with acetic anhydride and concentrated sulphuric acid producing a yellow coloured product peaking at 420.6 nm. The optimum conditions of the reaction and the analytical procedures of the assay were established. Under the optimum conditions, linear relationship with good correlation coefficient (0.9994) was found between the absorbance and the concentration of ARTS in the range of 4 – 60 µg mL-1. The limit of detection was found to be 0.72 µg mL-1 and quantitation limit was 1.8 µg mL-1. The analytical performance of the method was validated and the results were satisfactory. The developed method was successfully validated and applied for the determination of artesunate in bulk and pharmaceutical formulation without any interference from common excipients.

INTRODUCTION: Artesunate (ARTS), (3R, 5aS, 6R, 8aS, 9R, 10S, 12R, 12aR)-Decahydro-3,6,9-trimethyl-3,12 epoxy-12 H-pyrano [4-3-j] 1,2-benzodioxepin-10-ol hydrogen succinate (Fig. 1), is a semi-synthetic derivative of artemisinin, a naturally occurring sesquiterpene endoperoxide. It has been shown to be highly active against multi – drug – resistant Falciparum malaria in several regions dealing with high resistance rate against the classic antimalrials 1,2. ARTS have a rapid onset of therapeutic effect after extensive biotransformation of artesunate into dihydro artemisinin which is likely to provide beneficial therapeutic outcomes in severe or cerebral malaria 3-5. It is particularly difficult compound to detect and identify by standard spectrophotometric methods, has a relatively low molar extinction coefficient, and has no distinct UV/visible spectra or fluorescent properties (Fig. 2). Therefore the reported detection systems were electrochemical detection 6-8 derivatization 9 and post – column degradation before UV detection 10, 11 evaporate light scattering detection 12 and more recently MS 13, 14. However most of them were required for pharmacokinetic assay, whereas quality control needed more simple method like spectrophotometry. Antimalarials such as chloroquine and sulfadoxine have particular chemical groups that react with certain compounds to give colour reactions 15,16.

Although ARTS does not possess these reactive groups, we discovered that it undergoes dehydrogenation by reacting with acetic anhydride and sulphuric acid and a stable unsaturated system capable of absorbing light is produced. A visually distinct yellow product is produced which absorbs visible light at 420.6 nm with a positive correlation between absorbance intensity and ARTS concentration. 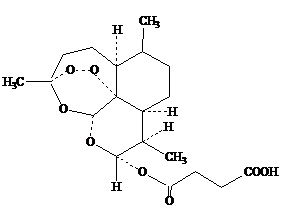 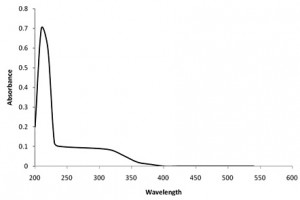 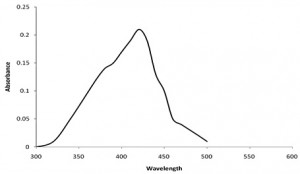 General procedure: The procedure involves formation of yellow coloured product by reaction of ARTS with acetic anhydride and sulphuric acid by heating at a temperature of 100°C for 15 minutes. The absorption spectra of coloured complex under optimum conditions were scanned in double beam mode against a reagent blank over the range 300-800 nm. Characteristic λmax value was obtained at 420.6 nm (Fig. 3). Experimental conditions were established by varying each parameter individually and observing the effect on the absorbance of the coloured species. All the spectral characteristics, as well as measured or calculated factors and parameters are summarized in Table 1.

Effect of Temperature and Heating Time: Higher temperature was required to accelerate the reaction. The colour intensity increased with increasing temperature and maximum absorbance was obtained following heating on a water bath at a temperature of 90 – 100°C for 15 minutes. Further heating caused no appreciable change in colour. The complex obtained was stable for more than three hours.

Linearity and Sensitivity: For assessing linearity, 10 mg ARTS reference substance was accurately weighed; 0.5 mL of acetic anhydride and 0.6 mL of concentrated sulphuric acid was added drop wise with the temperature maintained below 10°C. The solution was heated on a boiling water bath for 15 minutes, brought to room temperature and volume was made to 100 mL with methanol to furnish a concentration of 100 µg mL-1. From this stock solution, aliquots were suitably diluted with methanol to give a concentration of 4-60 µg mL-1.

The calibration curve was constructed by plotting absorbances as a function of corresponding concentrations. The regression equation for the results was derived using least square method. Beer’s law plot was linear with very small intercept (0.005) and good correlation coefficient (0.9994) in the concentration range of 4 – 60 µg mL-1. The limit of detection (LOD) and quantitation (LOQ) were determined using the formula: LOD = 3.3 σ / S and LOQ = 10 σ / S where σ, is the standard deviation of the response and S is the slope. The LOD and LOQ were 0.72 µg mL-1 and 1.8 µg mL-1 respectively.

Accuracy and Precision: Accuracy of the proposed method was assessed as analytical recovery studies by standard addition method. Known amounts of ARTS reference standard were added to pre-determined drug containing pharmaceutical formulation and determined by proposed method. The mean percentage recovery and percentage relative error Er was calculated as,

The percentage relative error was calculated as:

Intraday and inter-day precisions were assessed using three concentrations and three replicates of each concentration, the relative standard deviations were found to be very small, indicating reasonable repeatability of the proposed method as shown in Table 3.

*Average of determinations carried out in triplicate

*Average of determinations carried out in triplicate. 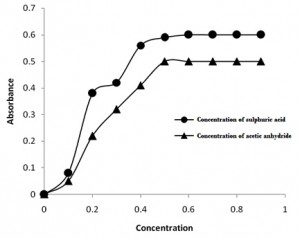 FIGURE 4: OPTIMISATION OF CONCENTRATION OF SULPHURIC ACID AND ACETIC ANHYDRIDE

Specificity: The specificity of the method was investigated by observing any interference encountered from the common excipients of the pharmaceutical formulations. It was found that these compounds did not interfere with the results of proposed method.

Robustness: Robustness was examined by evaluating small variations in different experiments conditions such as heating temperatures (±2°C), volume of reagents (±0.1 ml) and working wavelength (±1 nm). Three replicate determinations at six different concentration levels of drugs were carried out. The within-day RSD values were found to be less than 1% indicating that the proposed method has reasonable robustness (Table 4).

*Average of determinations carried out in triplicate

Application of proposed assay in the analysis of pharmaceutical formulations (Artesunate tablets): Ten tablets were accurately weighed and powdered. A quantity equivalent to 10 mg ARTS was dissolved in 20 mL methanol in a 100 mL calibrated flask. The solution was warmed on a water bath maintained at 70°C for few minutes to ensure effective stability. The solution was allowed to attain room temperature, diluted to volume with methanol to furnish a concentration of 100 µg mL-1. An aliquot of 1.0 mL from above solution was pipetted out into 10 mL volumetric flask. The solvent was removed by evaporating it in a water bath maintained at 80 °C, cooled, 0.5 mL of acetic anhydride was added and kept in ice bath. To this 0.6 mL of sulphuric acid was added and heated at 100°C for 15 minutes. The solution was allowed to attain room temperature and diluted with methanol (10 µg mL-1). The absorbance was measured at 420.6 nm. The average percent recoveries of different concentrations were based on average of five replicate determinations. The results obtained were in good agreement with those obtained by reference method (Table 5).

TABLE 5: DETERMINATION OF ARTESUNATE IN TABLETS

*Average of nine determinations, three each with starting powder amount equivalent to 10, 25 and 50 mg artesunate.

CONCLUSION: The proposed spectrophotometric method provided simple, reproducible and accurate method for determination of ARTS. The established method was validated and applied to determination of studied drug in their dosage form without interference from common excipients.

The advantage of the method being less time consuming and do not require various elaborate treatments and tedious extraction procedures in addition to satisfactory sensitivity and reproducibility as well as convenience and simplicity.