COMPOUNDS FROM TROPIDIA CURCULIOIDES AS INDUCERS OF APOPTOSIS IN CANCER CELLS

COMPOUNDS FROM TROPIDIA CURCULIOIDES AS INDUCERS OF APOPTOSIS IN CANCER CELLS

ABSTRACT: Arunachal Pradesh (AP), the North-eastern state of India, is a natural habitat of 550 species of orchids including 37 species of medicinal importance. Though these plants are used extensively by locals for various ailments, very few scientific investigations have been conducted to establish their pharmacological potential. In the present study, we selected Tropidia curculioides, a relatively unexplored orchid to evaluate its cytotoxic potential. As any investigation has not been conducted to evaluate the cytotoxic potential of the extracts or compounds, we performed screening of the compounds, previously isolated by our group for cytotoxic activity against three cancer cells viz., MCF-7, A549, and SiHa cells. Interestingly, all three compounds exhibited IC50 in the range of 30-50 µM. Further, we studied apoptosis inducing property and ROS mediated cell death with the most active compound. The result indicated that TcR-3, a gallic acid derivative possesses maximum activity with IC50 of 34.26 µM against A549 cells. The cell proliferation assay and apoptosis-inducing property measured by flow cytometry indicated that the compound has comparable activity to that of standard drug doxorubicin. Further, it was capable of inducing ROS-mediated cell death against A549 cells. Cell cytotoxicity of the compound was well within the permissible limit. The present study identified TcR-3 as a chemopreventive agent which could further be investigated for target-based activity.

INTRODUCTION: Orchids are known for their aesthetic and economic importance. However, few of them also possess enormous medicinal importance. Out of 550 species of orchids reported from Arunachal Pradesh (AP), 37 are of medicinal importance 1. Though these plants are an integral part of the traditional system of medicine, hardly any investigation has been conducted to establish their pharmacological properties.

Tropidia curculioides (Tc) Lindl. is a rare orchid mostly found in tropical and subtropical areas of AP 2. Though the genus Tropidia comprises nearly 30 species 3, only one species T. curculioides is found in Indian subcontinent.  A decoction of the whole plant is used in the cold stage of malaria, and root decoction is used in acute cases of diarrhea 4. Besides, any scientific report on the evaluation of cytotoxic potential or any other activity is not available.

Modern medicinal approach to combat several lethal diseases depends on using a single molecule for a single target; however, several complex diseases, such as cancer could be treated in a cost-effective and preventive manner by multi-component preparations 5.

The result demonstrated that the diethyl ether (Et2O) fraction of roots of Tc exhibited most potent antibacterial activity with MIC 125 µg/ml; antimycobacterial activity 125 µg/ml (MIC); and leishmanicidal activity of 100 µg/ml (IC50) 11. To identify the marker compounds, column chromatography of Et2O fraction was conducted which resulted in the isolation of three compounds viz., 4-hydroxy benzaldehyde (TcR-1), 4,4'-dihydroxydiphenylmethane (TcR-2) and 3,5-dihydroxy-4-methoxy benzoic acid (TcR-3) 12 Fig. 1. Structure of the compounds was established by NMR and Mass spectral analysis. As any report on the anti-cancer potential of the compounds was not available, we thought of conducting the present investigation.

Cell Proliferation Assay: The MTT assay was used to measure viability on treated cells as described previously 13. Briefly, the cancer cells of different origin (lung cancer, A549; cervical cancer, SiHa; and breast cancer, MCF7) were used for the assay. Normal cells HEK293 were used for cell cytotoxicity assay. Briefly, the cells were seeded at an initial density of 5 × 103 cells/well/100 µL of DMEM supplemented with 10% FBS in a 96-well tissue culture plate and cultured in a CO2 incubator for overnight at 37 ºC. Subsequently, the medium was replaced with fresh medium, and different concentrations of the compounds (in triplicates) were added to the wells, keeping the final concentration of DMSO not exceeding 0.2%.

The cells treated with 0.2% DMSO (vehicle) were included as the control. After 48 h, MTT solution (5 mg/ml in PBS) was added to each well to make the final concentration of 0.5 mg/ml. It was further incubated for 3 h, the medium was aspirated, and 100 μL of DMSO was added to solubilize the formazan crystals. Absorbance at 570 nm was recorded using a microplate reader. The experiment was performed in triplicates, and the results were expressed in mean ± S.D. Percentage cytotoxicity was calculated concerning MTT absorbance of the vehicle-treated cells.

Flow Cytometric Analysis: To understand the mode of cell death (necrotic/apoptotic), dual staining with FITC-conjugated Annexin V and PI was carried out as described previously. Briefly, the cells were treated with different dilutions of TcR-3 and were harvested by trypsinization. After 48 h, the cells were subjected to labeling with fluorochrome-conjugated antibodies. The treated cells were resuspended in 100 μl of Annexin binding buffer (10 mM Hepes-NaOH, pH 7.4; 140 mM NaCl; 2.5 mM CaCl2), followed by addition of 5 µl of FITC-conjugated annexin-V (0.02 µg/µl) and PI (5 ng/µl) in each well.

The incubation was continued for 10 min, and the binding buffer (400 µl) was added to the cells followed by flow cytometric analysis (FACS caliber, Beckton-Dickinson Immunocytometry system, USA). Excitation and emission wavelengths for FITC-Annexin V were 485 nm and 535 nm respectively and for PI were 535 nm and 620 nm respectively. The FACS data were analyzed using Flowjo software, and different cell populations (necrotic, primary apoptotic and late apoptotic) were determined 14.

Free Radical Generation Analysis: To understand whether TcR-3 caused apoptosis due to ROS production, flow cytometric analysis was carried out using dichlorofluorescein- diacetate (DCFH-DA), as a fluorescent probe. Fluorescence could be detected only if the probe was oxidized to dichlorofluorescein (DCF) by ROS inside the cell 15. The test compound treated cells were harvested by trypsinization for 48 h then it was washed once with PBS, resuspended in 0.5ml of PBS followed by the addition of 2'7'-dichlorodihydrofluorescein diacetate (DCFH-DA, 10μM). The cells were incubated for 15 min and were analyzed by flow cytometry using FACS Calibur, where excitation and emission frequency was set at 485 nm and 530 nm, respectively 16. Here, vehicle and doxorubicin-treated cells were taken as negative and positive controls.

RESULTS: Three compounds isolated from the bioactive Et2O fraction of Tc were investigated by MTT based cell proliferation assay against MCF-7, A549, and SiHa cells. The compounds were characterized as 4-hydroxy benzaldehyde (TcR-1), 4,4'-dihydroxydiphenylmethane (TcR-2) and 3,5-dihydroxy-4-methoxy benzoic acid (TcR-3) and the result has been summarized in Table 1.

Doxorubicin was used as a positive control. The result showed the promising antiproliferative activity of the compounds lying in the range of 30-50 µM (IC50) as expressed in Fig. 2. The compound TcR-3 showed maximum activity against A549 cells with IC50 34.26 µM, followed by cervical (SiHa) and breast cancer (MCF7) with IC50 36.82 and 43.75 µM respectively. Rest two compounds exhibited moderate cytotoxicity. Further, to evaluate cell cytotoxicity of the compounds MTT assay was conducted against normal HEK293 cells at the experimental concentrations of each compound. The healthy cells exhibited cell cytotoxicity well within the permissible limit.

To understand the mode of cell death (necrosis or apoptosis), dual staining with FITC-conjugated Annexin V and PI was performed at IC50 concentration of TcR-3 against A549 cells Fig. 3. As evident from the figure, TcR-3 predominantly induced apoptotic cell death. The total number of late and early apoptotic cells was comparable to that observed in doxorubicin-treated cells. 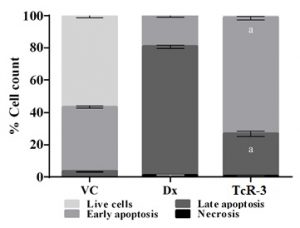 FIG. 3: ANNEXIN-PI STAINING TO DETERMINE THE MODE OF CELL DEATH BY TcR-3. The A549 cells treated with IC50 dose of TcR-3 for 48 h, were subjected to dual staining with FITC-Annexin V and PI and analyzed by FACS. DMSO-treated cells (VC) were included as negative control whereas doxorubicin-treated cells (DX) were included as positive control. A population of necrotic (Annexin V-/PI+), primary apoptotic (Annexin V+/PI-) and late apoptotic (Annexin V+/PI+) was analyzed Flowjo software. Significance levels are calculated concerning vehicle-treated cells.  a, p≤0.001;  b, p≤0.005; c, p≤0.01; d, p≤0.01; e, p≤0.05.

It is well established that any kind of interruption in the redox state of a cell affects cell health and increases ROS production resulting in cell death. Therefore, ROS levels in TcR-3 treated A549 cells were analyzed to see if apoptosis is ROS-mediated. As evident from Fig. 4, significant increase (p≤0.01) in the DCF fluorescence, indicative of ROS production, was observed in TcR-3 treated cells as compared to vehicle-treated cells. The increase in ROS production was comparable to that observed with doxorubicin, the positive control. 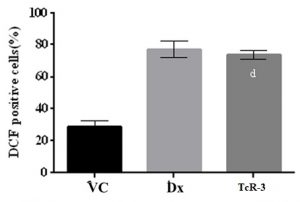 DISCUSSION: As evident from the results, all compounds demonstrated dose-dependent growth inhibition on different cancer cells. The compound 4-hydroxy benzaldehyde TcR-1 exhibited moderate cytotoxic activity against all cancer cells. It is worth mentioning here that recently a case of tongue cancer and two cases of lung cancer have successfully been treated with 4-hydroxy-benzaldehyde after a surgical operation 17, 18. The compound TcR-2 with common name Bisphenol F or 4,4'-dihydroxydiphenylmethane also exhibited good cytotoxic activity towards breast cancer cells with IC50 37.19 µM and moderate activity against cervical and lung cancer cells (IC50 in the range of 41-45 µM). A chemically similar compound, Bisphenol A-induced apoptosis against human promyelocytic leukemia (HL-60) cells 19. The third compound TcR-3, a gallic acid derivative 3,5-dihydroxy-4-methoxy benzoic acid exhibited maximum cytotoxic potency against A549, lung cancer cells with IC50 34.26 µM in our study. In cervical (SiHa) and breast cancer (MCF7), it also showed significant activity in the range 36-43 µM (IC50). Our results are in agreement with earlier reports wherein the parent phenolic compound gallic acid has shown cytotoxic activity against a variety of cancers 20, 21.

However, comparative analysis of IC50 of TcR-3 and gallic acid showed that the former compound is more effective. Comparative analysis demonstrated that TcR-3 exhibited IC50 of 36 µM against SiHa cells whereas, gallic acid showed IC50 of 80 µM against HeLa 22. In a similar note, TcR-3 showed almost half activity than the parent gallic acid (~60 µM, IC50) as reported earlier 23 against A549 cells. Since cell cytotoxicity of TcR-3 was negligible it could also serve in combination with existing chemotherapeutic agents.

It is well established that almost all cancer cells continue to proliferate by evading apoptosis and most of the cytotoxic compounds promote apoptosis in cancer cells. To establish if the cytotoxic effect brought about by TcR-3 is due to induction of apoptosis, Annexin V-PI staining of the treated cells was carried out. When a compound affects the cell adversely, the damage on the cell membrane results in the externalization of phosphatidylserine from the inner side of the plasma membrane to the cell surface, thus allowing annexin V binding to phosphatidyl serine. An increase in FITC-Annexin V stained cell population clearly shows induction of apoptosis (shown in the figure as early apoptotic cell population).

Disruption of membrane integrity allows PI uptake which then binds to DNA or RNA during late apoptosis. It is thus clear that TcR-3 can induce apoptosis. Though cancer cells have increased ROS levels, they adopt several mechanisms to counter the increased ROS levels and hence evade cell death. An increase in ROS production by the cytotoxic agents is one of the mechanisms by which they induce cell death. Here, the integrity of the mitochondrial membrane plays an important role in cell health. Depolarization of mitochondrial membrane is caused mostly due to enhanced ROS production which is associated with apoptosis 24. The increased ROS production in TcR-3-treated cells as indicated by DCF fluorescence, suggests that TcR-3 induces apoptosis through ROS mediated route.

CONCLUSION: Thus, the present study indicates that the cytotoxic potential of TcR-3 is due to ROS-mediated apoptosis. These findings can further be validated by in-vivo studies to establish its chemotherapeutic potential.

ACKNOWLEDGEMENT: Authors acknowledge Dr. A. K. Chauhan, Founder President, Amity University, for his continuous motivation and encouragement. AD acknowledges the financial support from the University with Potential for Excellence grant (UPE-II) from JNU, New Delhi. This work was financially supported by the Department of Biotechnology, Government of India (DBT Sanction Order No: BT/332/NE/TBP/ 2012).

CONFLICT OF INTEREST: None of the authors have declared any conflict of interest from being named as an author on the above manuscript.