ABSTRACT: Alzheimer’s disease (AD) is an irreversible, progressive brain disease that slowly destroys memory and thinking skills, reasoning, planning, language, and perception, and eventually even the ability to carry out the simplest tasks. Many scientists believe that Alzheimer's disease results from an increase in the production or accumulation of a specific protein (beta-amyloid protein) in the brain that leads to nerve cell death.The brains of people with AD have an abundance of two abnormal structures amyloid plaques and neurofibrillary tangles that are made of misfolded proteins. This is especially true in certain regions of the brain that are important in memory. In people with Alzheimer's disease, deposits called amyloid plaques build up in the brain. These are composed, in part, of a protein called beta-amyloid, which is a fragment of the amyloid precursor protein (APP).A mutation in the gene that makes APP is believed to be responsible for 5 to 20 percent of all early onset familial Alzheimer's disease. People with a mutation in the APP gene tend to develop Alzheimer's disease at around age 50.The present work deals with the designing a suitable drug by molecular docking which acts on the APP gene to regulate the amyloid plagues formation in the brain.

INTRODUCTION: The "amyloid cascade hypothesis" is the most widely discussed and researched hypothesis about the cause of Alzheimer's disease. The strongest data supporting the amyloid cascade hypothesis comes from the study of early-onset inherited (genetic) Alzheimer's disease 6. Mutations associated with Alzheimer's disease have been found in about half of the patients with early-onset disease. There are two abnormalities which are considered abnormalities that are considered Hallmark of the diseaseamyloid plaques and neurofibrillary tangles. Amyloid plaques are clumps of protein called beta-amyloid may damage and destroy brain cell in several ways, including interfering with cell-to-cell communication 7-8.

Neurofibrillary tangles: Brain cell depend on an internal support and transport system to carry nutrients and other essential materials throughout their long extensions. These tangles consist primarily of a protein called tau, which forms part of a structure called a microtubule. The microtubule helps transport nutrients and other important substances from one part of the nerve cell to another. In Alzheimer's disease, however, the tau protein is abnormal and the microtubule structures collapse 9-11. In Alzheimer’s disease threads of tau protein twist into abnormal tangles, leading to failure of the transport system. This failure is also strongly implicated in the decline death of brain cell.

FIG 1: FORMATION OF PLAGUES AND TANGLES

Target Identification: There may be several targets for a particular disease but the selection of an individual target is of utmost important. Target identification extract useful knowledge from the raw data and help to focus on the relevant items of data. Knowledge on the three- dimensional structure (fold) of a protein provides clues on its function and aids in the search for inhibitors and other drugs. The target selected was GCK gene whose protein sequence and relevant data are validated by using several computational tools like NCBI, UniProtKB, GeneCards, KEGG etc.

Chemical Library: A chemical library or compound library is a collection of stored chemicals usually used ultimately in high throughput screening. The chemical library can consist in simple terms of a series of stored chemicals. Each chemical has associated information and its physiochemical properties with information such as the chemical structure, molecular formula, weight, logP, hydrogen bond donor, hydrogen bond acceptor, characteristics of the compound etc.

For this, library of screening Accelyrs Discovery Studio, ChemSpider, PubChem, ChemBank, etc. databases were used. There are millions of compounds available in these databases. Through the help of these tools we can find a new compound against a GCK gene and tested for their ability to modify / inhibit the target protein. In compound screening the major part to test that compound is having druglkeness or must passed ADME properties.

We have used Accelyrs Discovery Studio for the present work.

Lead Optimization: There are many tools available for designing of lead/drug such as Discovery Studio, HyperChem, ChemDraw, ChemSketch, etc. When a drug is a complex chemical mixture, this activity is exerted by the substance's active ingredient or pharmacophore but can be modified by the other constituents. Activity is generally dosage-dependent and it is not uncommon to have effects ranging from beneficial to adverse for one substance when going from low to high doses. Activity depends critically on fulfillment of the ADME criteria. To be an effective drug, a compound not only must be active against a target, but also possess the appropriate ADME (Absorption, Distribution, Metabolism, and Excretion) properties necessary to make it suitable for use as a drug.

The drug must possess the TOPKAT parameter for its novel properties. TOPKAT is nothing but the properties prediction of that drug. The properties such as molecule’s bioavailability, it is carcinogenic or not, lethal dose (LD50), value of developmental toxicity prediction etc. The all values are calculated by protocols of Discovery studio. The lead taken here was NIC5-15 whose skeleton was taken as a basic nucleus and by modifying it library was designed.

Molecular Simulation and Docking: High-throughput screening (HTS) of compound libraries is used to discover novel leads for drug development. When a structure is available for the target, computer-based screening using molecular docking may also be considered. Molecular docking is to compute simulation procedure to predict the conformation of a receptor- ligand complex, where the receptor is usually a target protein (3NYL) and the ligand is either a small designed molecule. It can also be defined as a simulation process where a ligand position is estimated in a predicted or pre- defined binding site.

Molecular docking simulations may be used for reproducing experimental data through docking validation algorithms, where protein-ligand conformations are obtained in-silico and compared to structures obtained from X-ray crystallography or nuclear magnetic resonance. Furthermore, docking is one of main tools for virtual screening procedures, where a library of several compounds is “docked” against one drug target and returns the best hit.

Before docking study, we need to minimize the energy of both molecule (ligand) and receptor (target molecule). All these studies were carried out through Discovery studio. With the help of this tool we can see the proper intermolecular bonds between ligand-receptor complexes. The protein with Pdb id 3NYL was docked with several designed compounds and then the compound with the best interaction and least toxicity was selected.

RESULTS: From the designed library of molecule very few candidates screened out from the ADME and TOPKAT parameter. The best candidate molecule has been selected for further analysis. By using molecular simulation and docking technique the best drug candidate were identified which is satisfied the all rules and possess the inhibitor property. The inhibitor shows the highest binding affinity towards the receptor cavity is chosen for the best drug candidate molecule among synthesized library. The drug “dodecahydrogen (1S, 2S, 3S, 4R, 5R, 6S)-5-ethyl-6-methoxycyclohexane-1, 2, 3, 4-tetrol” was the best of all the compounds from the library of the compounds whose chemical structure, TOPKAT and ADME Parameters are shown below.

A report of TOPKAT was analyzed for each compound and compounds having;

The ADME values represent the absorption, distribution, metabolism and excretion, the below diagram represents the ADMET values of the designed compound. If the dot is in between the circles which indicates a good AMET values of the compound.

TABLE 1: LIST OF DESIGNED COMPOUNDS SHOWING THEIR ABSORPTION AND HEPATOTOXICITY.

Docking Results: This above drug is minimized and is docked with the active minimized site of the receptor molecule whose Pdb id is 3NYL and the dock score was found to be and the docking was found between the following atoms:

Arginine 386 of the receptor with fluorine (16) atom of the compound.

TABLE 2: THE DOCKING RESULTS WITH THEIR C-DOCKER INTERACTION ENERGY TO ACTIVE SITE OF TARGET RECEPTOR 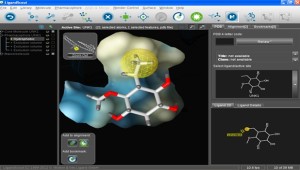 FIG 5: THE DESIGNED COMPOUND WITH BINDING POCKET OF TARGET RECEPTOR

DISCUSSION: The interactions between designed potent inhibitor and receptor were studied by using various computational methods. Based on binding energy, and hydrogen bond formed, docking results were analyzed to find out the best ligand which was dodecahydrogen (1S, 2S, 3S, 4R, 5R, 6S)-5-ethyl-6-methoxycyclohexane-1, 2, 3, 4-tetrol has high values to potentiate the target among all ligands.

Thus the in-silico method adopted in the present study helped in identifying the ligands using the commercial software and online tools for the treatment of Alzheimer’s disease.

This method reduces the time and cost in designing a drug as well as in analyzing the drug likeliness before it enters the clinical trials. The further studies were carried out by preclinical trials.

CONCLUSION: The developed drug dodecahydrogen (1S, 2S, 3S, 4R, 5R, 6S)-5-ethyl-6-methoxycyclohexane-1, 2, 3, 4-tetrol acid was found to have all characteristics and which can act on APP gene and regulate the formation of plagues and tangles and thus be an effective drug for the treatment of Alzheimer’s disease.

ACKNOWLEDGEMENT: Authors are thankful to the Management and staff of DNA labs for providing all the necessary facilities to do the research work.