ABSTRACT: Being exposed to a number of heavy metals in the environment, humans are suffering from various health problems. Cadmium and arsenic are both priority hazardous substances and carcinogens. Environmental co-exposure to these heavy metals is also an important consideration and most experiments with laboratory animals investigate only one heavy metal. In the present study albino rats were exposed to both the heavy metals alone and in combination in 5 groups and the 6th group was of control. Animals were treated for 30 days and 60 days with the lower doses of NaAsO2 (4.3 mg/ks b. wt.) in group B and CdCl2 (2.6 mg/kg b. wt.) in group D and higher dose of NaAsO2 (8.6 mg/ks b. wt.) in group C and CdCl2 (5.2 mg/kg b. wt.) in group E. A combination dose of CdCl2 (2.6 mg/kg b. wt.) and NaAsO2 (4.3 mg/ks b. wt.) was given to another group F of experimental animals. In 30 days, intoxicated animal groups the weights of the kidney, brain and heart increased and a significant increase in liver and spleen occurred both by arsenic and cadmium. Although the high dose of arsenic decreased the relative heart weight but the combination dose showed a significant increase in weight of all the organs. In 60 days treated groups both the heavy metals showed a reduced effect on heart weight, but the increase was observed in the brain, liver and spleen and kidney weight while combination dose showed a significant increase in the relative weight of spleen and liver. Bodyweight gain was reduced in 60 days of treated groups.

INTRODUCTION: The need for a comfortable lifestyle has raised many health problems in humans, as they are exposed to a number of toxic elements in the environment. Increased industrial processes and intensive agricultural activities have resulted in contamination of food, forage, animal feed and drinking water in many areas these toxic elements have crossed the alarming level of these toxic metals, heavy metals are one of the burning issues. Arsenic has long been recognized as a human poison.

It naturally occurs in the earth's crust and in ground water. Generally, in ground water arsenic occurs at concentrations more than the drinking water standard of 10 µg/l, due to which all the humans are exposed to the low level of arsenic. Many human activities such as mineral extraction and processing wastes, poultry and swine feed additives, pesticides and highly soluble arsenic trioxide stockpiles are not uncommon and have contaminated soil and drinking water 1, 2.

Exposure to arsenic represents a health risk associated not only with its overt toxic effects but also with subtle to profound alteration in immune system. Different epidemiological studies show that arsenic is associated with increased rate of various chronic diseases, including cancer, disease of skin 3, disease of nervous system, peripheral vascular disease (black foot disease, a peripheral artery disease 4 and endocrine dysfunction in the United States and other countries like China and India 35, 5. Cadmium is considered one of the most toxic elements present in the environment. It has long elimination half-life 6. It is often present in polluted area and is emitted during the combustion of coal and mineral oil, smelting, mining, alloy processing and industries that use cadmium as a dye 7 and from agricultural processes 8. Some food products (e.g. Cereals; 9 are also major sources of human exposure as they are grown by using phosphate fertilizers which contains cadmium as pollutant 10. Sewage sludge is also recognized as an important source of cadmium contamination 6. Cadmium has no known biological function but mimics the action of other divalent metals that are essential for these functions 11. Cadmium has the ability to cross the biological membrane and once it binds to ligands with exceptional affinity it causes respiratory and cardiovascular dysfunction, cancer 12 and kidney dysfunction 13. In addition, cadmium exposure can also cause behavioral and neurological disorders. This investigation was designed to determine the effects of cadmium and arsenic alone and concomitantly on the weight of selected organs (liver, kidney spleen, brain and heart of albino rats).

MATERIALS AND METHODS: Albino rats of 6 to 10 weeks old weighing 150-160 g were purchased from the Laboratory Animal Resource Section, of Indian Veterinary Research Institute (IVRI) Izzatnagar Bareilly, Uttar Pradesh that was maintained in an experimental animal shed of the division. Animals brought into new conditions were acclimatized to the new environment prior to the experiments.

Rats were kept under conventional condition (6 rats per steel cage, 12 h. light to dark cycle) and were maintained with standard rat food and tap water ad libitum. The experimental rats were randomly divided into 6 groups A, B, C, D, E and F each comprising of 6 animals. Group A was control remaining groups were intoxicated with different doses of heavy metal (arsenic and cadmium) compounds, Group B sodium arsenite (low) with 4.3 mg/kg b. wt, Group C sodium arsenite (high) with 8.6 mg/ kg b. wt, Group D cadmium chloride (low) with 2.6 mg/kg b. wt, Group E cadmium chloride (high) 5.2 mg/kg b. wt and Group F combination low dose of sodium arsenite and cadmium chloride (4.3 mg/kg b. wt +2.6 mg/kg b. wt). The compounds were given in tap water as they were easily soluble in it while the control received only plain water per os by gavage. Rats under the above treatment were monitored for 30 days and 60 days and their body weight were taken weekly. Animals were sacrificed on the next day after the completion of the duration. Blood was collected for hematological and biochemical examination. The respective body organs were taken out for relative organ weight study.

RESULTS AND DISCUSSION: Clinical observations showed that exposed animals were docile and less active than the control group. No mortality occurred in control and other groups treated with the different doses of heavy metal. There was time and dose-dependent reduction in the body weight when treated for 30-60-days duration. The effect of treatment of arsenic and cadmium on different organs of albino rats, when intoxicated for 30-60 days, is given in Table 1 to 4 and Fig. 1 to 5.

Heart: When intoxicated for 30 days surprisingly, the animals of group D treated with low sodium arsenite showed an increase in relative heart weight value that is 8.84% whereas other groups showed an insignificant change as compared to control (group A). In animals treated for 60 days, group B, and F showed no significant change in the relative heart weight that is 1.97% and 3.7% respectively but decrease in group D from 8.42% to 1.23% and increase in group C from -4.63% to 2.96% was observed.

Kidney: Kidney is a well-perfused organ and if toxic substances are present in the blood, then its large quantities will pass out of the body in urine. Sometimes, the proximal convoluted tubule of the kidney becomes the target organ for toxic substances to which the organism is exposed. It was observed that groups C, E and F showed a maximum increase of relative kidney weight in animals for 30 days that is 15.96%, 17.47%, 17.22% respectively. Animals treated for 60 days showed a maximum increase in absolute and relative kidney weight of group E treated with high cadmium dose that is 17.37% and 23.45%. 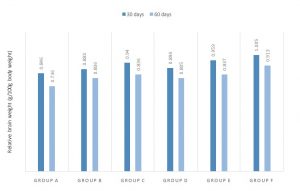 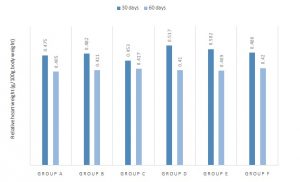 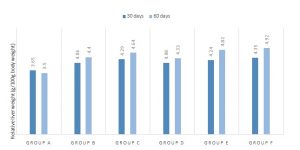 In the present study, the weight of kidney, liver, brain and spleen increased more significantly in group C and group E with high doses of arsenic and cadmium. Liver weight was reported to seven days and onwards 14 with impaired liver function due to arsenic effect 15 dissociated from gallium arsenide. Few studies 16 shows that mercuric chloride also causes an increase in liver and kidney weight.

Similar toxic effects of arsenic and cadmium on liver and kidney weight were reported by Flora 17 and others researchers 18, 19, 20 and cadmium toxicity. Arsenic cause an increase in the relative weight of the heart in the above result might be due to arsenic-induced oxidative stress 21. Enlarged liver and kidney due to arsenic-induced oxidative stress were also reported by Sayed S 2015 et al. 22 Significant increase of liver, kidney, spleen and brain weight was seen in groups with a high dose of arsenic and cadmium alone. Group F showed a maximum increase of organ weight in almost all treated groups. It might be due to magnification in the toxic properties of arsenic and cadmium when given together. Magnification of organs weight may be the body’s adaptive mechanism to combated systemic toxicity. Moreover, production or an ineffective elimination of ROS (Reactive Oxygen Species) may induce oxidative stress and can cause damage or malfunctioning of various organs including liver, kidney, lungs and spleen due to heavy metal toxicity 23, 24.

In our experiment, group C and group E with a high dose of arsenic and a high dose of cadmium respectively when treated for 30 days and 60 days showed a significant increase in relative brain weight. An increase in relative brain weight was believed to reflect the accumulation of water in cells 25. This accumulation of water maybe because of the inhibitory activity of Na+/K+- ATPase enzyme 36 which was very essential for maintaining osmotic equilibrium by a cell. It is reported that during circulation toxic metals like cadmium, lead and mercury pass through capillaries and cross the blood-brain barrier and settle down in the brain causing neurotoxicity and cellular dysfunction 26.

Among vital organs, after the liver, the kidney was most affected in terms of an increase in both absolute and relative weight. In this experiment, kidney weight seems to be proportional to the dose and time duration of exposure. Similar results were reported by Brown et al., (1979) 27 were kidney weight increased in rats when arsenic was administered via drinking water (40, 85 or 125 mg/l as sodium arsenate) for six weeks in relation to body weight. According to few studies 28 an increase in total kidney weight was not significant when exposed to different doses of cadmium for four weeks. When effect of heavy metals was studied on fish 29, it was observed that cadmium is hazardous for liver, spleen and kidney here it increases the number and size of melano macrophage centers.

In the present study, the relative weight of rats increased in almost all the groups treated for 30 days and 60 days. Among vital organs, the liver was most affected in the case of weight 28. Flora et al., (1998) gave concurrent views where liver weight increased when animals were intoxicated with gallium oxide for 7 and 21 days. Arsenic and cadmium accumulate in liver inducing ROS resulting in DNA strand breaks and lipid peroxidation 30. Although in results, heart is not affected significantly but arsenic and other heavy metals cause cardiovascular disease state such as hypertension, atherosclerosis and microvascular disease by targeting endothelium and leading to endothelial dysfunction 4.

There are reports 31, 32 of decreased renal function, hepatic injuries and disturbance in the electrolyte balance of rats treated with a high dose of heavy metal mixture. The present work demonstrates a significant increase in relative weights of the spleen, and immune system-related organ. Spleen index a useful indicator of immune dysfunction 33, a significant increase in spleen weight suggests that both the metals could exert a direct toxic effect on spleen alone and in combination. This may be due to significant alteration in oxidative complex immune-modulatory effect in spleen causing altered spleen cells responsiveness to IL- 2 to apoptosis 34.