ABSTRACT: Inosine Monophosphate Dehydrogenase (IMPDH) plays a very important role in Guanosine Monophosphate (GMP) biosynthesis. Type I hIMPDH is expressed at lower levels in all cells, whereas type II is especially observed in acute myelogenous leukemia, chronic myelogenous leukemia cancer cells, so it is thought to be an active target for leukemic drug design. MD-simulation studies of the solvated modeled structure of hIMPDH (PDB Id: 1B3O) in the presence of NAD+ have revealed some interesting feature on the role of some conserved water molecules in the binding of IMP to the enzyme. Based on H-bonding interaction of IMP with Asp 364, Arg 322, Asp 274, Cys 331 and Asn 303 residues in the X-ray and simulated structures, and the recognition dynamics of O2’ and O3’ ribose hydroxyl groups (of IMP) with the conserved water molecules, we have modified the hydroxyl group of IMP and modeled a few number of derivatives. Optimization of ligand structures, followed by docking in enzyme, solvation, energy minimization of the protein-ligand complexes and their successive all atoms simulation studies have been made up to 5 ns. After critical investigation of different snapshots, the stereochemical quality, binding affinity/energy of the modified ligand is calculated and have screened three IMP-analogs (modified at O2’ and O3’ ribose oxygen), which can also effectively interact with the residues of the mononucleotide binding pocket and may thought to act as inhibitor for IMPDH. The drug-likeness and drug score of the modeled compounds are observed to be better.

Among the two isoforms of hIMPDH, type I is found at lower levels in all cells, whereas type II is selectively upregulated in neoplastic fast replicating lymphocytes and tumor cells.

Several ligands like 6-chloropurine riboside 5′-monophosphate (CPR), ribavirin (RVP), mizoribine 5′-monophosphate (MZP), tiazofurin adenine dinucleotide (TAD), benzamide adenine dinucleotide (BAD), and 2-β-D-ribofuranosyl-selenazole-4-carboxamide (SAD) have been developed as inhibitors of the hIMPDH- II and few of them are in clinical uses as immunosuppressive and antileukemic agent. Water molecules are known to play an important role in mediating protein-ligand interactions 4. Especially, the conserved water molecules at the ligand-binding sites (in the enzyme-inhibitor complex) may have some rational importance toward the interaction of ligands to the binding residues of the enzyme 5. Those conserved water molecular (hydrophilic centers) positions could be useful for designing the analog compounds (through covalent modification of existing drug/inhibitor) by water mimic inhibitor/drug design protocol 6.

The simulation of IMPDH with known and potential ligands (e.g., IMP) and cofactors (NAD+) in the presence of water molecules may provide some insights on the geometrical and electronic consequences of inhibitor-protein interaction. The topology of conserved water-mediated interaction around the N1/C2/N3 atoms of adenine moiety, O2’ and O3’ hydroxyl group of ribose in IMP and their H-bonding stereochemistry may provide some information on the integrated role of a water molecule in the function of that enzyme. Based on these interactions of conserved molecules with the ligands, especially with the phosphate group of IMP and carboxamide group of NAD+ in the IMPDH complexes, few inhibitors have already been designed 7, 8. However, the presence of a few other water molecules (during the dynamics of IMPDH-IMP-NAD+ complex) around the purine nucleotide insist us to design few IMP-analogs using water mimic inhibitor design protocol.

MATERIALS AND METHODS: The crystallographic structure of 1B3O having 104 missing residues were obtained from the Protein Data Bank 9, and B-chain was selected (excluding ligands and water molecules) using Swiss PDB Viewer program 10, 11.

Missing residues were covalently added one by one in the respective five gaps within the X-ray structure using Swiss PDB Viewer program. Each residue was refined after incorporating in the protein structure by implementing GROMOS 96 force field 12. Energy minimization was performed (500 steps of steepest descent followed by 1000 steps of the conjugate gradient) without assigning any constraint. Finally, the modeled structure (containing the entire sequence) was again energy minimized with a 10 Å cut-off distance 13 for the non-bonded interaction and distance-dependent dielectric constant. The final RMSD of modeled protein was 0.73Å (backbone) and 0.84Å (Cα) with the template X-ray structure 1B3O. Then the ligand IMP (Inosine monophosphate) and NAD+ (Nicotinamide adenine dinucleotide) were parameterized and were successively docked in the mono and dinucleotide binding pockets of the enzyme.

Protein Docking with Ligands: Protein-ligand docking was done using Autodock 4.2.3 with MGL Tools 1.5.4 plugin 14, 15, 16 where total grid points per map took was 64000 with a spacing of 0.375 Å and center grid box of 65, 55 and 10 Å in x, y and z-axis respectively (from Q-Site Finder server) 17. In our entire docking experiments, the Lamarckian genetic algorithm was used with the default parameters.

After critical analysis of different snapshots (of the simulated structures), we have found few conserved hydrophilic centers (occupied by water molecules) near IMP (N1, C2, N3 position of adenine and O2’, O3’ position of ribose hydroxyl group) which play some role in recognition of mononucleotide to the enzyme. Based on this study, we have built a few IMP-analogs and did their docking in the 25 ns simulated IMPDH-II structure and performed further 5 ns MD simulation with each enzyme-ligand complex.

Search of Conserved/Hydrophilic (Water Molecular) Centers: The conserved water molecules in the simulated IMPDH-II structures were identified by a standard least-square fitting algorithm using Swiss PDB Viewer program. The 1 ns simulated structure was taken as a template on which the other prerecorded snapshots at the interval of 100 ps were successively superimposed to identify conserved hydrophilic water molecular center.

The fit was initially optimized on the backbone – backbone atoms of the template – reference structures. Those water molecules that were found to be within 1.5Å 26, 27 between the two snapshots (MD simulation) were taken as conserved.

RESULTS AND DISCUSSIONS: The simulated structures of solvated 1B3O after docking with different compounds are shown in Fig. 1.

During the simulation of solvated IMPDH-II structure (PDB Id: 1B3O) containing IMP and NAD+, the interaction of different water molecules at the N1, C2, and N3 atoms of purine moiety and at O2’ and O3’ of the ribose hydroxyl group of IMP is given in Table 1.

TABLE 1: DISTANCES (Å) OF THE DIFFERENT WATER MOLECULES FROM IMP IN THE SIMULATED STRUCTURE OF SOLVATED 1B3O (CONTAINING NAD+) 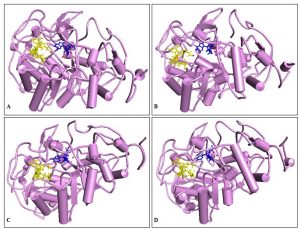 From these results, it is observed that the hydration frequency of those sites in IMP, especially at the O2’ and O3’ hydroxyl oxygen atoms seems to be high. In the simulated structure (up to 25 ns) the O3’ atom seem to be more solvated compared to O2,’ and few water molecules are also observed to be conserved (with reasonable occupation frequency) around the ribose hydroxyl groups.

During the simulation, the H-bonding interaction of some important residues of the IMP binding pocket Asp 364, Asn 303, Arg 322 and the catalytic Cys 331 with the O2’ and O3’ bound water molecules are observed, and they are summarized in Table 2.

TABLE 2: THE H-BONDING DISTANCES (Å) OF PSEUDO CONSERVED WATER MOLECULES (WHICH ARE INTERACTING WITH O2’ AND O3’ ATOMS OF RIBOSE HYDROXYL GROUPS) WITH THE DIFFERENT RESIDUES OF IMP-BINDING SITES OF hIMPDH-II STRUCTURE

On analyzing the water-mediated recognition of the O2’ and O3’ to the mono nucleotide-binding residues, specially the H-bonding pattern/distances of the water molecules around the O2’ and O3’ hydroxyl groups of ribose, we are interested on the water mimic inhibitor design using conserved water molecular dynamics at the inhibitor/IMP binding pocket of protein. 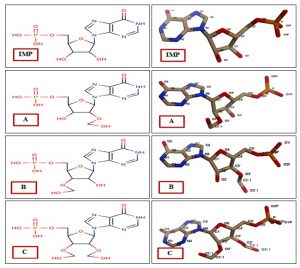 FIG. 2: THE CHEMICAL STRUCTURES (LEFT) AND NUMBERING SCHEMES (RIGHT) OF IMP AND MODIFIED-IMPS (A, B AND C COMPOUNDS)

Subsequently, we have successively modified the hydroxyl (OH) groups of O2’ and O3’ positions by adding the hydroxymethyl (-CH2OH) group by replacing the conserved water molecules Fig. 2.

Here we have replaced (used) only one conserved molecular water center which interacts with the O2’ or O3’ hydroxyl oxygen atom. In the first case (compound A), keeping the O3’-H intact, we have chosen the position of water molecule W792 and replaced it by oxygen O2’1 atom so that the ribose hydroxyl (O2’-H) group is modified as (IMP)-O2’-CH2-O2’1-H. Similarly, in compound B, keeping the O2’-H intact, the position of W797 is replaced by O3’1 oxygen atom so that the IMP is modified as compound (IMP)-O3’-CH2-O3’1-H. For the design of compound C, we have replaced both the H-atoms of ribose hydroxyl groups (O2’-H and O3’-H) and replaced it by O2’-CH2-O2’1-H and O3’-CH2-O3’1-H by replacing the conserved water molecules W792 and W797.

Further docking the compound A, B and C in hIMPDH-II structure and subsequent simulation (5 ns) of the docked structures have shown the recognition susceptibility of these designed compounds to protein.

During the simulation, the H-bonding interactions of all the three IMP-analogs (A, B, and C) with water molecules are shown in Table 3.

TABLE 3: INTERATOMIC H-BOND DISTANCES (Å) OF THE WATER MOLECULES FROM THE O2’, O2’1, O3’ AND O3’1  ATOMS OF THE RIBOSE MOIETY PRESENT IN THE DIFFERENT MODIFIED IMP ANALOGS (COMPOUNDS A, B AND C) DURING THE SIMULATION OF THEIR SOLVATED COMPLEX OF hIMPDH-II STRUCTURE (1B3O) IN PRESENCE OF NAD+

Again the hydration susceptibility of N1, C2 and O3’ atoms has decreased in all the three cases compared to IMP bound structure whereas increased in case of O2’ atom.

The reasonable aquation frequency of the modified ribose moiety of A, B, and C compounds have been observed in the simulated docked structures.

The oxygen atom of the newly added hydroxyl methyl groups (-CH2-O2’1-H / -CH2-O3’1-H) can form H-bonds with the different water molecules ranging from 2.71-3.18Å. However, in compound C (where both the hydroxyl groups of IMP were modified), the O3’1 oxygen atom seems to have higher hydrophilic surrounding compared to O2’1. Moreover, it is also noticed that when the hydration susceptibility of ribose/modified ribose is increased, though it decreased at the N1, C2 and N3 sites of adenine moiety of the compound A, B, and C. The binding energy of IMP and the modified compounds (in the presence of NAD+) have given in Table 4.

TABLE 4: THE BINDING ENERGY OF IMP (AFTER 25NS) AND MODIFIED- IMP, COMPOUNDS (A, B, AND C) IN THE DOCKED STRUCTURES OF hIMPDH-II (PDB CODE: 1B3O) AFTER 5 NS SIMULATION

TABLE 5: SOME THEORETICAL DRUG PROPERTIES OF IMP AND MODIFIED- IMP (COMPOUNDS A, B, AND C)

All the compounds having nearly similar drug score, however, the modified-IMP have higher drug-likeness property.

All the results may suggest that adding the hydroxymethyl group (-CH2OH) at either O2’ or O3’ or at both sites of the ribose in IMP (by replacing few H-bonded conserved water molecules) may affect the binding affinity of parent ligand.

CONCLUSION: Our computational results may provide some light on the conserved water mimic inhibitor modification protocol. Using this conserved hydrophilic (water molecular) positions near the hydroxyl group of IMP (indicated in MD-studies), we have modified the ligand by covalent addition of new hydroxymethyl (–CH2OH) group at the O2’ and O3’ position(s) of ribose (in IMP) by replacing conserved water molecules. This computational water mimic inhibitor design protocol based on the H-bonding dynamics of conserved or partially conserved water molecules (which have an affinity towards the hydrophilic sites of ligand) may put forward a new strategy in the forthcoming substrate-structure based inhibitor design for IMPDH or other proteins.