ABSTRACT: The poor bioavailability and therapeutic response exhibited by conventional ophthalmic solutions due to rapid precorneal elimination of the drug may be overcome by the use of in situ gel-forming systems that are instilled as drops into the eye and undergo a sol–gel transition in the cul-de-sac. Norfloxacin ophthalmic solution has been shown to be effective ocular infections and may be used in patients with chronic conjunctivitis or ocular irritation. Norfloxacin in-situ gel was prepared using various concentrations of polymers such as Carbopol-934 and HPMC K4M by pH triggered gelling system with objectives of increasing contact time, achieving controlled release, reduction in frequency of administration and greater therapeutic efficacy of drug. The prepared in-situ gels were then evaluated for their visual appearance, clarity, pH, drug content analysis, in-vitro gelation (Gelling capacity), rheological studies, sterility testing and in-vitro drug release studies. It is evident from these studies that, formed polymeric in-situ gels had transparent, clear possessing satisfactory gelling capacity. The developed formulation was light yellow in colour, therapeutically efficacious, stable, non-irritant with sustained release of drug.

INTRODUCTION:    Extensive research has been carried in designing of polymeric drug delivery systems. The development of in situ gel systems has received considerable attention over the past few years. The in situ gelling polymers undergo sol‐to‐gel phase transition on exposure to the physiological conditions present in the eye. Insitu gels are viscous polymer‐based liquids that exhibit sol‐to‐gel phase transition on the ocular surface due to change in a specific physico‐chemical parameter (ionic strength, temperature or pH) 1.

This interest has been sparked by the advantages shown by in situ forming polymeric delivery systems such as ease of administration and reduced frequency of administration, improved patient compliance and comfort 2.

In situ gel formation occurs due to one or combination of different stimuli like pH change, temperature modulation and solvent exchange. From the early 1970's natural and synthetic polymers began to be investigated for controlled release formulations. Various natural and synthetic polymers are used for formulation development of in situ forming drug delivery systems.

Poor ocular bioavailability of drugs (< 1%) from conventional eye drops is due mainly to the precorneal loss factors that include rapid tear turnover, nonproductive absorption, transient residence time in the cul-de-sac, and the relative impermeability of the drugs to corneal epithelial membrane.

Another serious concomitant of the elimination of topically applied drugs from the precorneal area is the nasal cavity, with its greater surface area and higher permeability of the nasal mucosal membrane compared to that of the cornea 4. The development of new products for the treatment of ophthalmic diseases is facing a double challenge viz pharmacological and formulation factors. In addition, other problems are tolerability and comfort requirements of the eye 5. Normal dropper used with conventional ophthalmic solution delivers about 50-75μl per drop and portion of these drops quickly drain until the eye is back to normal resident volume of 7μl. Because of this drug loss in front of the eye, very little drug is available to enter the cornea and inner tissue of the eye.

Actual corneal permeability of the drug is quite low and very small corneal contact time of the about 1-2 min in humans for instilled solution commonly less than 10%. Consequently only small amount actually penetrates the cornea and reaches intraocular tissue 6. Controlled drug delivery to the eye is restricted due to these limitation imposed by the efficient protective mechanism 7.

Most of ophthalmic drugs are administered topically in the form of eye drops, a dosage form consisting of buffered, isotonic, aqueous solution or suspensions of the drug. Ophthalmic CDDS have been mainly prepared as gels, ointments, liposomes, micro and nanoparticles, micro spheres and ocular minitablets (MT) or films or inserts 8.

Ideal ophthalmic drug delivery must be able to sustain the drug release and to remain in the vicinity of front of the eye for prolong period of time. Consequently it is imperative to optimize ophthalmic drug delivery, one of the way to do so is by addition of polymers of various grades, development of viscous gel, development of colloidal suspension or using erodible or non-erodible insert to prolong the precorneal drug retention 9. Bioadhesive systems utilized microparticle suspension or polymeric solution 10.

Problems may be overcome by the use of in situ gel-forming systems that are instilled as drops into the eye and undergo a sol-gel transition in the cul-de-sac. The developed formulation will be characterized for various in vitro parameters e.g., clarity, gelation temperature and pH, isotonicity, sterility, rheological behavior, drug release profile and ocular irritation. The developed system will be a viable alternative to conventional eye drops for the treatment of Bacterial infection and various other ocular diseases 11.

The aim of the present work is to study the pH-triggered in situ gelling system of Norfloxacin, a first generation fluoroquinolone derivative used in conjunctival infections caused by susceptible bacteria 12.

The recommended dosage of Norfloxacin for the treatment of bacterial conjunctivitis is 1 or 2 drops of 0.3% solution in the affected eyes for every 2 hours up to 8 times for 2 days, then 1 or 2 drops every 4 hours up to 4 times for next 5 days. A combination of carbopol and HPMC was investigated as a vehicle for the formulation of eye drops of Norfloxacin (0.3%) to form gel when instilled into the eye to provide sustained release of the drug to improve the patient compliance by reducing the frequency of administration 13.

Materials: Norfloxacin was obtained as gift sample from ICPA, Ankleshwer, India. Carbopol-934 (Hi-Media labs India), HPMC K4 M from Yarrow Chemicals, India, and all other reagents were of analytical grade.

Preparation of formulations: Table 1 shows the composition of all the formulations. Take 70 ml of Distilled water in 100 ml glass beaker. Heat for 10 min until it boils. Then Add HPMC K4 M in a small part wise with full stirring with an overhead stirrer. After complete addition of HPMC K4 M, the solution was allowed to cool in cold water.

It was clean, colorless and viscous solution. Now add and dissolve citric acid and Di- sodium hydrogen phosphate. Then Norfloxacin was dissolved in 0.1 N NaOH and dissolve it separately. The drug solution was then added to the polymeric solution under constant stirring until a uniform solution was obtained. Now add carbopol 934 small part wise and stir for dissolution and then add Tween 20 and heat it. Then after complete dissolution add Edetate disodium and benzalkonium Chloride as per calculation. Now Distilled water was added to make up the volume up to 100 ml of solution. Then solution was filtered through filter paper by applying the vacuum. The formulations were filled in vials under aseptic conditions, sterilized in the autoclave (121oC and 15 psi) for 20 minutes and further evaluations were carried out 14.

Evaluation of norfloxacin in situ gels:

The drug samples were withdrawn at the interval of one hour for the period of 8hrs from diffusion medium and analyzed by a UV spectrophotometer at 277 nm using simulated tear fluid as blank.

Gelling capacity: The viscosity and gelling capacity plays important role for in situ gelling system. The formulation should have an optimum viscosity for easy instillation into the eye as a liquid which undergo sol-to-gel transition. Prepared in situ gelling systems were evaluated for the in vitro gelation capacity. All the formulations gave satisfactory results (Table 3).

In vitro release studies: The release profile of the formulations shown in Figure 1. The results indicated that the formulation F-5 showed better sustaining effect amongst all formulations. This may be due to the presence of higher concentration of carbopol 934 along with HPMC K4 M in the formulation F-5. The in vitro release profile of F-5 was then compared with marketed formulation of Norfloxacin (NORFLOX eye Drop). From the release studies, it was found that the drug release was about 49.05% and 12.80% for marketed product and F5 respectively after 1hr. And at the end of three hours the drug release was 98.89% and 38.31% for marketed product and F-5, respectively. The comparative release was shown in figure 2.

Results indicated that, the drug release was significantly prolonged by using the in situ gelling system due to the addition of the polymers carbopol 934 and HPMC K4 M. For all the formulations, the best fit model was Higuchi matrix equation and suggesting diffusion controlled release may be due to the swelling nature of polymers.

The 'n' value were less than 0.5, which indicated that all the formulations showed drug release by Fickian diffusion mechanism. 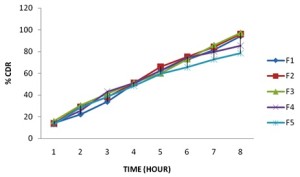 FIG. 1: COMPARISON OF IN VITRO RELEASE OF IN SITU GEL FORMULATIONS 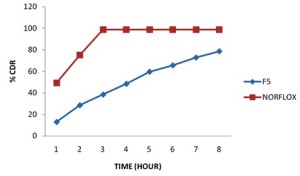 Sterility Testing: All the prepared in situ gelling systems were evaluated for the sterility. After 7 days of incubation the results showed no microbial growth in all formulations (Table 5).

Ocular irritancy studies: The observations of ocular irritancy are shown in Table 7.The results of the ocular studies indicated that the formulation F-5 was non-irritant with excellent ocular tolerance. No ocular damage or abnormal clinical signs to the cornea, iris or conjunctiva were visible.

CONCLUSION: Norfloxacin, a broad spectrum antibacterial agent use in the treatment of ocular infections, was successfully formulated as PH-triggered in situ gelling system (0.3% w/v) using Carbopol 934.

The formulations were liquid at the formulated pH (6- 6.5) and underwent rapid gelation in contact with STF due to ionic interactions. The formulated system provided sustained release of the drug over 8-hrs in vitro, and the developed formulations were devoid of any deleterious effect on the ocular tissues. The formulation demonstrated better therapeutic efficacy as it were successful in inhibiting the growth of the microorganisms for the entire duration of the study (24 hr) when compared with the marketed eye drop, thus developed formulations are viable alternative to conventional eye drops by virtue of its ability to sustain dug release. Also important is the ease of administration afforded and decreased frequency of administration resulting in better patient acceptance.