Categories Menu
Home » CONTROLLED RELEASE OF AN ANTI- EMETIC AGENT FROM A POLYMERIC MATRIX: FORMULATION AND IN- VITRO STUDY

CONTROLLED RELEASE OF AN ANTI- EMETIC AGENT FROM A POLYMERIC MATRIX: FORMULATION AND IN- VITRO STUDY

CONTROLLED RELEASE OF AN ANTI- EMETIC AGENT FROM A POLYMERIC MATRIX: FORMULATION AND IN- VITRO STUDY

INTRODUCTION: Domperidone maleate is used as anti- emetic in the treatment of some forms of nausea and vomiting by increasing the gastro intestinal motility. It is slightly water-soluble drug and is rapidly and almost completely absorbed from GIT, following oral administration, but undergoes first pass and gut wall metabolism. Through hydroxylation and oxidative N- dealkylation, Domperidone is metabolized to hydroxydomperidone and 2, 3 dihydro- 2 oxo- 1- H-benzimidazole 1- propionic acid respectively 1.

The biological half-life of the drug is 7.5 hr time of peak plasma concentrations occurs about 30 min. after the oral dose 2. It is typically administered three or four times daily 15 to 30 min before meals, in the form of conventional tablets thus frequent administration leads to a constant change in blood concentration. To overcome the frequent administration and to minimize the peak- to- trough oscillation of blood concentration, sustained release formulation is developed 1, 3.

Multilayered tablet concept has long been utilized to develop prolonged release formulation such a tablet has fast releasing layer and may contain one (bi-layered) or two (triple) layers, to prolong the drug release. The Pharmacokinetic advantages relies on the criterion that, drug release from the fast releasing layer leads to a sudden rise in the blood concentration. However, the blood level is maintained at steady state, as the drug is released from the sustaining layer 4-7.

Recently, numerous hydrophilic polymers have been investigated and are currently used in the design of controlled release formulation.

Hydroxypropyl methyl cellulose (HPMC), Carbopol and Polyethylene oxide (PEO) have been widely studied for their application in oral controlled release (CR) system 8, 9. When in contact with water HPMC, Carbopol and PEO hydrates and form a gelatinous barrier layer around the tablet. The rate of drug release from the matrix is dependent on various factors such as type of polymer, drug, drug polymer ratio, particle size of drug and polymer and the type and amount of fillers used in the formulation 10, 11.

Hence in the present work, an attempt has made to develop once daily controlled release matrix tablets of Domperidone maleate using putative hydrophilic matrix materials such as HPMC, Carbopol and Polyethylene oxide.

Preparation of Matrix Tablets: The matrix tablets were prepared by wet granulation. The drug polymers and other excipients used were passed through sieve no. 80 before their use in the formulation. Then layer with sustaining dose was formulated with various amounts of different polymers. The dose in the formulation for fast release was 10 mg. The maintenance dose or sustaining dose of domperidone maleate was calculated as per reported method 12, 13.

Formulation of Fast Release Layer: The fast release layer was formulated by mixing domperidone maleate, uniformly with microcrystalline cellulose by following the formulae as per Table 1. Granulation was carried out by wet granulation method by adding sufficient quantity of purified water. The granules were mixed with talc and aerosil.

Formulation of Sustaining Layer: Granules for sustaining layer were prepared by mixing maintenance dose Domperidone maleate, with matrix materials (Hydroxypropyl methyl cellulose, Carbopol and polyethylene oxide) following the formula given in table 2. The powders were granulated using sufficient quantity of purified water till a wet mass was formed. The cohesive mass obtained was passed through sieve no. 16 and the granules were dried at 40°C.

The dried granules were again sieved by passing through sieve number 24. The granules were mixed with talc, magnesium stearate and aerosil. The required amount of granules for fast release layer compressed lightly using a 10- station- tableting machine using 7mm round s/c punch. These compressed tablets (fast release) were put over the required quantity of granules prepared for the sustaining layer and compressed with maximum force to form a bi-layered tablet (Table 2).

TABLE 2: SUSTAINING LAYER OF THE FORMULATION 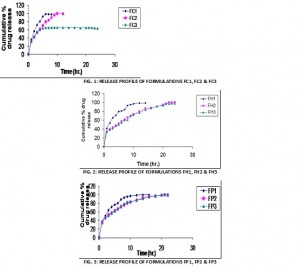 In- Vitro drug release study: The in- vitro dissolution studies were carried at using USP-II apparatus at 50 rpm. The dissolution media consisted of 0.1 N hydrochloric acid for the first 2 hours and phosphate buffer pH 7.4 from 3-24 hours (900 ml), maintained at 37°C ± 0.5°C. Samples of 5 ml each were withdrawn at appropriate time intervals throughout the dissolution study of 24 hours, for analysis. Each sample withdrawn was replaced with an equal amount of fresh dissolution medium, the drug release at different time intervals was measured by UV- spectrophotometer at lmax 280 nm 3, 16, 17.

RESULT AND DISCUSSION: Over the last few years a large number of hydrophilic polymers were evaluated as release retardants since they are non-toxic, biocompatible and cheaper. The composition of immediate release layer of matrix tablet as shown in table 1 is constant for all the formulations. However the composition of sustaining layer (table 2) differs only in drug to matrix material (HPMC, CP and PEO) ratio. The matrix tablets were round shape, s/c with diameter 7 mm. The hardness of tablets ranged from 3.17-3.93 Kg/cm². The percentage friability of all the formulations was between 0.06- 0.10 %. The values of hardness test and percentage friability indicates good handling property of the prepared bi-layered tablets. The drug content of the formulations was uniform (> 98.83) in all the cases.

ACKNOWLEDGEMENT: The authors are thankful to Morepen Lab., Ltd., for providing API. Avinash C. Pandey acknowledges the funding support from the Department of Science and Technology (DST), Govt of India and FA5209-11-P-0160.