ABSTRACT: The choice of an antibiotic depends solely on the identification of the species by determination of the sensitivity characteristics of the microorganism. Along with the determination of sensitivity pattern, understanding the susceptibility pattern of particular strain isolated from patient is equally important. Variation in patient and microorganism is known to be key factor for predicting the outcome for individual patient and establishing targets for clinical susceptibility. Dosage adjustment in relation to minimum inhibitory concentration (MIC) of drug, taking into account underlying pathogen might affect the therapeutic response and hence improve clinical outcome of patient. Therefore, E coli positive urine cultures of patients who were prescribed Ciprofloxacin were collected and their MIC was determined by agar well diffusion method. The response of patient was obtained by direct interview with them after 3 days of Ciprofloxacin therapy. There is a direct correlation between MIC and therapeutic outcome of antibiotic therapy. The clinical success rate increases when MIC is <1mg/l whereas, patient becomes non respondent as MIC approaches to >4mg/l which can be categorized as susceptible and resistant respectively. Therefore, for best clinical outcome MIC lies in the range <1-4 mg/l which could be used to discriminate success and failure of Ciprofloxacin treatment. Breakpoint of Ciprofloxacin was also derived from the study which is 4mg/l. This study concludes that obtaining only sensitivity pattern of antibiotic is not sufficient for optimal antibiotic therapy because MIC of sensitive strains varies and so does the response in relation to the minimum inhibitory concentration

INTRODUCTION:Successful antimicrobial therapy of an infection depends on concentration of antibiotic at the site of infection that is high enough to kill or inhibit the growth of microorganism.

The clinician purpose in prescribing an antimicrobial drug is to produce at the site of infection a concentration high enough to kill or inhibit the growth of microorganism.

Different strains of pathogenic species are known to have sensitivity characters constant to enable the choice of drug to be made solely on the basis of identification of the species; therefore, it is necessary for susceptibility pattern of the particular strain isolated from patient to be determined by the sensitivity test in the laboratory 1. The main therapeutic outcome predictor for antimicrobial efficacy is the determination of MIC 2.

The MIC of Ciprofloxacin also varies according to different pathogens from 0.444mg/l to 128mg/l 3. Ciprofloxacin MICs were between 0.015mg/l and 0.03mg/l in E. coli standard of ATCC 25922; however, E. coli isolates categorized as resistant to Nalidixic acid and susceptible to Ciprofloxacin the corresponding figure was between 0.12 and 0.25mg/l 4. Trends suggest the higher MIC of Nalidixic acid may be due to its resistance pattern as shown by some Salmonella species. This resistance leads to decrease in the patient response5.

As seen in Nalidixic acid, the difference in susceptibility pattern, leads to diverse therapeutic response on the individual. Dosage adjustment in relation to MIC’s of drug, taking into account underlying pathogen might affect the therapeutic response and hence improve the clinical outcome of patient. Also, we can roughly estimate the dose that should be given to inhibit the organism, if we determine the MIC of the drug.

Most patients suggestive of urinary tract symptoms are started with an empirical therapy of Ciprofloxacin at a relatively fixed dose of 500mg BD. However, the therapeutic response of the patient might be in relation to the MIC of the drug. There is little research and fewer data to relate the response of patient to the MIC of Ciprofloxacin in patient with UTI and E. coli.

a)      Preparation of agar dilution plates: 20ml of cooled molten MHA was added to the petri plate. The plates were set to dry. The prepared inoculums were then swabbed in to the dried petri plate.

b)      Inoculation: Using an 8.86 mm bore, holes were punched into the agar plate. 50-60µl of different concentration of prepared antibiotic solution was delivered into the punched well. The plates were then left for diffusion for at least 1 hour and then was incubated at 35-37oC for 24 hours.

c)      Quality control: ATCC 25922 control strain for E. coli was used, which was supplied from Department of Microbiology, Patan Hospital.

d)     Reading the result: The lowest antibiotic concentration with the highest zone of inhibition was considered to be the MIC of the sample. The zone of inhibition was measured by Vernier caliper. MIC is lowest concentration of the agent that completely inhibits visible growth as judged by the naked eye, disregarding a single colony or a thin haze within the area of the inoculated spot.

e)      Interpreting MIC: The MIC of Ciprofloxacin for E coli has been categorized into susceptible, intermediate and resistant 6, 7.

Statistical analysis of data: The collected data were analyzed using SPSS v 15 and Microsoft Excel 2007. Comparison of data was done by Chi-square test and P value <0.05 was considered significant.

MIC obtained: MIC was determined for all 70 patients; the reference range of Ciprofloxacin taken was 0.03 – 128mg/l.  The MIC was categorized on the basis of Table 4.

TABLE 4: CATEGORIZATION OF MIC AND ITS FREQUENCY

Quality Control: A standard of E coli ATCC 25922 was used for quality control purpose and MIC of the strain was found to be 0.015mg/l. 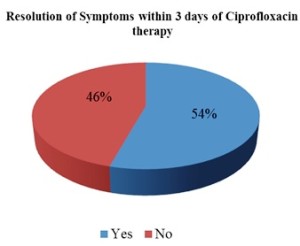 Correlation between MIC and Therapeutic response

Patients those who did not respond to the Ciprofloxacin treatment, had MIC in the intermediate and resistant range even if the strain of E. coli was sensitive.

DISCUSSION: It has been advised that medical practitioners should be aware of   increasing trends of resistance of urinary pathogens to commonly prescribed antibiotics as well as the profile of antibiotic resistance within their community. Therefore, periodic evaluation of sensitivity pattern is essential for rationale and appropriate use of antibiotics 9. It is important to monitor the status of antimicrobial resistance among uropathogens in order to improve the treatment recommendation 10.

However, to achieve an adequate response from an antimicrobial agent, it has to achieve a sufficient drug exposure in relation to MIC, at the site of infection, for optimal efficacy 13. Determining MIC is considered to be the gold standard for the susceptibility of antibiotic to microorganism and is therefore used to judge the performance of all other methods of susceptibility testing 8.  Along with the sensitivity test of antibiotics, the bactericidal activity of antibiotics can be described by the investigation of bactericidal kinetics or by the determination of the minimal bactericidal concentration against a particular bacterial strain 14.

For Ciprofloxacin, the MIC is categorized into 3 different categories i.e. Susceptible, Intermediate and Resistant. The categorization of MIC is summarized in Table 1 6, 7. Similar results were obtained in our study, where we were able to categorize the MIC of Ciprofloxacin into 3 categories. It was found that, among 70 isolates of E. coli 62% were found to have MIC > 4mg/l i.e. it was grouped under resistant category. 27% were found to have MIC <1 mg/l and was grouped under susceptible category and 11% was grouped under intermediate category which had MIC between 1-4 mg/l (Table 4).

The lowest MIC breakpoint given is <1mg/l and the highest is >4mg/l 1, 7. The clinical success rate in the study decreased as the MIC of Ciprofloxacin was greater than the breakpoint concentration i.e. 4mg/l (Table 5).

Correspondingly, while analyzing the relation between the response and MIC of Ciprofloxacin sensitive strains only, we found that, the response was 100% in susceptible category (Table 4). Even if the strains were classified as sensitive, the patient who did not respond to the treatment was 50%. The MIC of such strains was found to be >4mg/l. Consequently, we can say that, to obtain the clinical success with Ciprofloxacin, knowing only the sensitivity pattern is not sufficient. Determination of MIC is equally effective, as the clinical response depends upon the concentration of antibiotic at the site of infection, and the concentration can be best predicted by MIC. Also, while analyzing the pharmacokinetic parameter of ciprofloxacin it was found that effective killing concentration were achieved in pathogens with MIC less than 0.25 15.

Although, MIC is important, it is not a surefire indication of clinical success or failure. Determination of MIC only cannot be used to access the therapeutic effectiveness of the drug.  MIC together with the known pharmacokinetic properties of the substance can be used to assess the presumed degree of therapeutic effectiveness of the drug. In individual cases, additional special characteristics of the patient can be taken into account 14.

The interpatient variability in population pharmacokinetic parameter estimates has only been recognized as a key factor in predicting the outcome of individual patient and establishing the breakpoint and target for clinical susceptibility 2. To best predict the efficacy of the antibiotic therapy, determination of pharmacodynamic parameter, i.e. AUC and the relation with maximum plasma concentration and dose i.e. Cmax/MIC, AUC/MIC dose/MIC relations are considered necessary. Various studies suggest that AUC/MIC ratio of 125 is required for optimal clinical effects for treatment of serious infection 15.

Some studies show the relevance of dose selection in optimizing target attainment, with important differences among pathogens, even those with MICs within the susceptible range 16. The risk of Ciprofloxacin treatment failure was 27.8 times greater in those not achieving an AUC/MIC≥250 16. Also, the dose/MIC value can be considered as the threshold for the prediction of clinical cure or failure and increasing the exposure above this threshold can further increase the probability of cure 2. It has been recommended to use higher dose of ciprofloxacin i.e. 1200mg/day to ensure optimal antimicrobial activity in cases of bacteria with higher MIC 15, 17.

However, in this study, AUC and the doses could not be adequately correlated due to lower sample size of dose 750mg and lack of variation in the dosage regimen used.

From this study, it was also found that, MIC was variable in case of sensitive drug too. This could affect the response shown by the patient since MIC and clinical success are interrelated.

CONCLUSION: This study gave way to optimize the treatment regimen for UTI, it aimed to obtain the relation between minimum inhibitory concentration and clinical success of the drug. It was found that, therapeutic response of Ciprofloxacin seen was maximum when MIC was in susceptible range i.e. <1mg/l. Therefore, an MIC of <1mg/l to 4mg/l could be used to discriminate success and failure of Ciprofloxacin treatment. Along with MIC, if we could obtain the equivalent AUC, it could confirm the breakpoint of the therapy as well as optimize the effective dosage regimen with 100% clinical cure.