ABSTRACT: Aim: To analyze the percentage cost variations among different brands of the commonly prescribed anti–hypertensive drugs. Materials and Methods: The cost of different brands of commonly used antihypertensive drugs was sorted out by referring latest CIMS, MIMS, Drugs Monitor and IDR. The cost of 10 dosage forms (Tablets / capsules) in INR of each brand, Cost Ratio and Percentage Cost Variation were calculated. Results: The percentage variation in the cost was above 100% with most of the commonly used antihypertensive drugs like Amlodipine (2.5 mg) 1040.58%, Atenolol (50 mg) 564.10%, Telmisartan (40 mg) 542.22% and Ramipril (10 mg) 478.39%.  Among the combination therapy Atenolol + Hydrochlorothiazide (50 + 12.5 mg) 504.82%, Amlodipine + Atenolol (5 + 50 mg) 437.86% and Lisinopril + Hydrochlorothiazide (5 + 12.5 mg) 403.33% variation Conclusion: Hypertension is the most common cardiovascular disease and drugs are to be prescribed for prolonged period. If a costly brand is prescribed, the patients have to pay more money unnecessarily for their treatment. The costly brand of same generic drug is proved to be in no way superior to its economically cheaper counterpart. Ideally, therefore, the drugs should be prescribed in generic to save the patient's money and to enhance the compliance

INTRODUCTION: Hypertension is one of the major causes of morbidity, mortality and needs lifelong treatment. It is a major risk factor for cardiovascular disease. Worldwide nearly 1 billion adults (more than a quarter of world’s population) had hypertension in 2010 and this is predicted to increase 1.56 billion by 2025. Hypertension is fast gaining the status of a potential epidemic in India. Prevalence of hypertension in India is reported to vary from 17 – 21%. The situation is more alarming as hypertension attributes for nearly 10% of all deaths.1- 3

Pharmaco-economics plays an important role in practice of medicine in developing countries. Cost of drugs is an important factor influencing compliance with treatment of disease and also constitutes an essential part of rational drug prescription. Pharmaceutical Industry has many branded formulation of the same drug with large difference in selling price. In India, most of the drugs are available in brands and these are also prescribed by clinician mostly in brand name. This may affect the patient's finance adversely if costly brand is prescribed specially in diseases like hypertension which need treatment for longer duration.4

Cost of a particular antihypertensive drug (cost per 10 tablets/capsules) in the same strength and dosage forms being manufactured by different companies was obtained from latest “Current Index of Medical Specialties” October - December 2015, 5 “Indian Drug Review” (IDR) 2015, 6 Monthly Index of Medical Specialties November 2015, 7 Drugs monitor 2015. 8 as they are readily available source of drug information and are updated regularly. The cost was also crosschecked at pharmacy (retail drug store).

Cost ratio between the maximum and minimum cost of the same drug manufactured by different pharmaceutical companies was calculated as follows:

The drug formulation being manufactured by only one company was excluded. 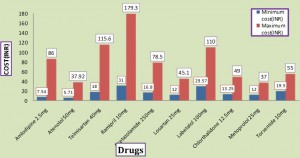 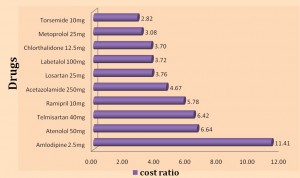 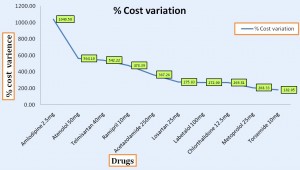 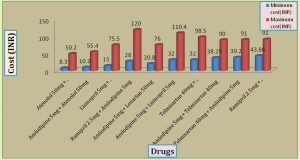 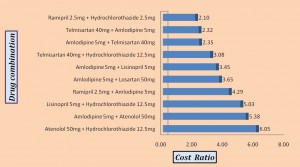 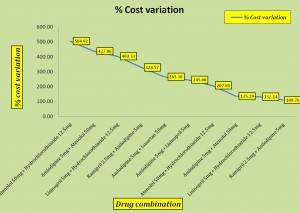 DISCUSSION: Our study findings showed a very high fluctuation in the minimum and maximum price of antihypertensive agents (Fig. 1&4) which is being manufactured by several companies across the different brands. The cost ratio was also observed to be very high (Fig. 2&5). The percentage variation in the cost was above 100% with most of the commonly used antihypertensive drugs (Fig. 3) and also with combination of antihypertensive drugs (Fig. 6). A Similar study done by Karve AV et al at Mumbai also showed significant higher price variations in different brands of the same antihypertensive drug.9 Other similar studies on oral anti-diabetic drugs, antidepressants, antibiotics, anti-epileptics also found similar results.10-13

India is known to export medicines to various countries at low cost, but faces the challenge of access to affordable and quality medicines for its own population. The Indian market has over 100,000 formulations and there is no system of registration of Medicines. More than one company sells a particular drug under different brand names apart from the innovator company. This situation has led to greater price variation among drugs marketed. These wide variations in the prices of different formulations of the same drug have severe economic implications in India. Unlike developed countries, people in developing countries pay the cost of medicines out-of-pocket. In India, more than 80% health financing is borne by patients. 14-16

Patients have to pay more unnecessarily if costly brands are prescribed. The costly brand of same generic drug is scientifically proved to be in no way superior to its economically cheaper counterpart.4

Many poor people frequently face a choice between buying medicines or buying food or other necessities due to limited resources and high pricing of drug. So medicine prices do matter. Ideally the drugs of cheaper brands should be prescribed to save the patient's money and to enhance the compliance. In India, doctors have less awareness in the cost difference of different brands of the same drug. It is felt that physicians could provide better services and reduce costs of drugs if information about drug prices was readily available. Studies have shown that providing a manual of comparative drug prices annotated with prescribing advice to physicians reduced their patients drug expense especially in a diseases like hypertension which needs long term treatment.17 Rational prescribing involves selecting the cost effective treatment.

There is a need for concerted action from regulatory authorities, doctors, pharmacists and general public at large to address this issue of antihypertensive drugs price variation. The excess profit margins presently being shared by pharmaceutical traders must be passed on to consumers which is a feasible and economically viable.

Drug price control order (DPCO) is an order issued by the government to fix prices of drug. Once medicine is brought under DPCO, it cannot be sold at a price higher than that fixed by the government (DPCO). Out of 509 drugs under price control, we found that only eight antihypertensive drugs amlodipine, atenolol, enalapril, losartan, methyldopa, nifedipine, hydrochlorothiazide were included in the DPCO list 2015.18, 19 We found in our study, price variation with above drugs even though the price is less than the ceiling price quoted by DPCO. Also none of the combinations of antihypertensive drugs are included in DPCO list 2015. Many hypertensive patients need combination drug therapy during the course of the disease. Hence, it is desired that the Government should bring all lifesaving drugs and combinations under price control.

Government of India has opened few generic drug stores in some states that sell generic medicines manufactured by public sector companies.20 The quality of generic medicines available on these stores at cheaper rates should be tested and compared with popular branded drugs and results should be widely published. Studies involving comparative evaluation on quality of branded and their generic counterpart may be made mandatory for the generic manufacturer and their reports should be made public to promote generic use and prescription.

CONCLUSION: Our study findings show a wide variation in the prices of different brands of same antihypertensive drugs in India (Table 1 and 2). There is a strong need to create awareness about this huge price variation among the general public, health care providers, health care payers, government agencies, policy makers, pharmacists for appropriate intervention to reduce economic burden on patients as well as the healthcare system. Results of our study make the prescriber informed about various brands and their price variations. So the prescriber can chose the cost effective antihypertensive agents for a patient to achieve rational prescribing.