Medicinal plants, since times immemorial, have been used in virtually all cultures as a source of medicine. Interest in herbal drugs is growing due to their efficiency, low toxicity and absence/minimal side effects. Crataeva tapia L. (Family-Capparaceae) is a branched tree, commonly called as ‘Varuna’. The plant has been reported to possess several medicinal uses which include anti-inflammatory, anti-oxidant, anti-arthritic, anti-fertility, anti-mycotic, anti-diabetic, anti-microbial, anti-diarrhoeal, wound healing, anti-helminthic, urolithic property, nephrolithic, hepatoprotective and cardio protective. Given the importance of the tree the present review illustrates the medicinal uses of the plant along with its pharmacognostic characteristics, phytochemistry, pharmacological actions and commercial uses. The innumerable medicinal properties and pharmacological studies establish a scientific basis for therapeutic use of this plant.

INTRODUCTION: Nature has bestowed India with an enormous wealth of medicinal plants; therefore India has often been referred to as ‘Medicinal Garden of the World’ 1. Recently there has been a shift in universal trend from synthetic to herbal medicine, which we can say as ‘Return to Nature’. Medicinal plants have been known for millennia and are highly esteemed all over the world as a rich source of therapeutic agents for prevention of diseases and ailments 1.

The present review is in view of the growing interest in medicinal plants. It also emphasizes (along with medicinal properties) pharmacognostic characteristics, phytochemistry, pharmacological actions and commercial uses of Crataeva tapia L. and its marketed formulations.

Botanical Description: The name Crataeva is derived from ‘Crataevas’, a Greek Botanist and the specific name ‘religiosa’ has been  given probably because the plant is often grown near religious places 5. Roots are long, cylindrical and woody. The outer surface of root and root bark is yellowish brown, longitudinally wrinkled, rough due to the presence of lenticels and lateral roots; the cork exfoliates in the mature bark. Inner surface is smooth, yellow, longitudinally striated, taste slightly bitter, odour indistinct 5.

The outer surface of mature bark is ash colored and rough due to presence of numerous small lenticels and transverse wrinkles 5. The wood is shiny yellowish white, moderately hard, smooth and closed grained. It is liable to insect attack 6. Leaves are deciduous, tri-foliate, ovate, lanceolate or obovate, acute or acuminate, attenuate at the base, entire, glabrous on both surfaces, pale beneath and reticulately veined 7.

Flowers are large, hermaphrodite, actinomorphic, hypogynous and complete, whitish to milky white in terminal dense corymbs 4, 8. Filaments of the stamen are purple or white when young, lilac when old, gynophore is lilac, sepals green when young, yellow or pale pink when old., petals whitish when young, yellowish when old. Stamens longer than the petals, spreading 7. It flowers profusely during March to May when it sheds all its leaves 8.

Fruits are globose or ovoid, woody, smooth or scurfy berry on the thickened gynophores. Seeds are embedded in pulp, nearly smooth brown 7.

Distribution: Crataeva tapia L. is globally distributed in India, Myanmar, Indonesia and China. In India it is found in Peninsular India, Western India, Gangetic Plains and Eastern India upto Tripura and Manipur 4, wild or cultivated. It is often found along streams, but also in dry deep boulder formations in sub-Himalayan tract 7.

It is usually cultivated in vicinity of temples in Central India, Bengal and Assam 9. It has been recorded as indigenous to Madras, Kerala and Kanara 5.

Propagation: Propagation of this plant through conventional methods is difficult because the plant develops insect galls due to oviposition of Aschistonyx spp. As a result floral buds drop and seed production is hampered 10. Erratic seed germination, destructive harvesting and habitat loss from deforestation have endangered survival of this plant. As a result of this endangerment, in India the plant has been categorized as rare or vulnerable in natural environment 11. Over exploitation of the plant bark might lead to extinction of Crataeva tapia L. in the near future. Also, natural propagation of the plant is highly impeded because of poor seed set, germination and heavy infestation by insects 12. These factors necessitate conservation and propagation of this medicinal plant by an alternative technique like Plant Tissue Culture.

Inamdar et al., have reported the generation of somatic embryos from callus cultures of Crataeva nurvula Buch. Ham. from shoot apices cultured on MS media supplemented with 1 or 2 mg/litre of 2,4 Dichoro phenoxy acetic acid (2, 4 D). These embryos developed into plantlets when transferred to MS media with 0.5mg/litre of 5-Methyltryptophan (5MT) 15.

Pharmacognosy: Pharmacognostic profile of any plant helps in identification as well as standardization of the quality and purity of the plant drug. The total ash, water soluble ash and acid insoluble ash of leaves have been reported to be 12.35%, 5.45% and 0.91% respectively and the extractive values for water, ethanol, methanol, petroleum ether and benzene as 27.80%, 19.46%, 16.26%, 9.10% and 8.60% respectively. The anatomical markers of the leaf are presence of anomocytic stomata and spiral thickening. Powder microscopy of leaf shows presence of stomata, spiral thickening and parenchymatous cell. The histochemical test reveals presence of lignins, tannin and starch. Presence of collenchyma and vascular bundle are few of the characteristics of petiole and petiolule 24.

Medicinal Uses: ‘Varuna’ is one of the important drugs of Ayurveda; commonly applied to regulate equilibrium among Vata, Pitta and Kapha in Ayurvedic system. Plant is used ethnopharmacologically as diuretic, laxative, lithnotriptic, anti-rheumatic, antiperiodic, tonic, rubefacient and counter-irritant 4. Whole plant powder improves tone of urinary bladder. The drug has been found to be useful in early obstructive uropathy and in controlling symptoms produced by urinary tract infections (UTI) 5. Whole plant powder is also cholinergic in smooth muscles including urinary bladder 27.

The root bark is rubefacient and counter-irritant 6. Extract of the root bark mixed with honey, is applied to scrofulous enlargement of glands 27.

In arthritis, paste of bark powder is prepared and applied externally. In abscess, bark decoction and honey is taken orally. Bark scrubbed in curd is applied to remove black spots from the skin. Patalkot healers prepare a decoction of bark powder, Gokhru (Tribulus terrestris), Adrak (Zingiber officinale), along with jaggery which is given to patients suffering from urinary calculi, kidney stones and diabetes 28.

The bark contains tannin and saponin; is bitter, anti-periodic, tonic, demulcent and has a stimulating effect on the liver. An extract of it is given as laxative and for promoting appetite. It is also useful in calculus and other affections of the urinary organs 6.

In North east of Brazil, Crataeva tapia bark infusions have been used in popular medicine as hypoglycemic agent 29. The bark of the root and stem constitute a principal drug material which is used for calculous affections 5.

Bruised well with a little vinegar, lime juice or hot water and applied to the skin in the form of poultice or paste, the fresh leaves act as rubefacient and vesicant. In Ceylon the leaves are used for gouty swellings. In Bombay they are used as a remedy for swelling of feet, and a burning sensation in the soles of feet. In Kokan the juice is given in case of rheumatism 7.

Leaves are also employed in guinea worm disease, malaria 28. Fresh leaves and roots mixed with coconut milk and ghee is used as a food to reduce corpulence and in rheumatism. In Sri Lanka, the leaves are used for gouty swellings. A decoction of leaves and stem has been reported to be used in dysentery and diarrhoea 5.

Flowers are astringent and cholagogue. Fruit is sweet and oily; laxative; removes “vata”, “pita” and “kapha” 7. Fruiting occurs in April-June.  Seeds are embedded in yellow pulp. Rind of the fruit is used as a mordant in dyeing 26. In Northeast of Brazil, the fruits are used as tonic and febrifuge 30. 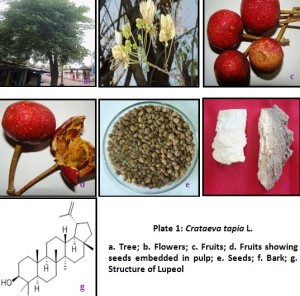 Stem bark of Crataeva nurvula is being used in churna form (along with 27 other ingredients) in preparation of Ayurvedic polyherbal formulation- Nyagrodhadhi churna, which is used to treat all types of polyuria including Diabetes mellitus 34. Samiolla and Harish  studied diuretic effects of polyherbal formulations- NR-AG-I and NR-AG-II both containing aqueous extracts of Crataeva nurvula. Between the two NR-AG-II shows a good diuretic property than NR-AG-I on healthy albino rats 35. The bark is also used in the form of Varunadya churna, Varunadya guda, Varunadya ghrita and Taila 5.

Inayathulla et al.,evaluated the effect of ethanolic extracts of Crataeva nurvula for its anti-diarrhoeal potential using castor oil induced diarrhoea model in rats. They found it to produce a statistically significant reduction in severity and frequency of diarrhea produced by castor oil 38.

Tripathy et al.,studied acute and chronic anti-inflammatory potential of Crataeva religiosa in rats and concluded that the aqueous and alcoholic extracts of stem bark possess significant anti-inflammatory activity in rats 39.

Shelkea et al., suggested that the stem bark extract of Crataeva nurvula possesses nephroprotective potential and improves hematological derangements associated with Cisplastin nephrotoxicity 46. Anand et al., have tested Crataeva nurvula Buch-Ham. for its efficacy against urolithiasis and nephrolithiasis 47, 48. Experimental studies carried out on Crataeva nurvula showed it to be effective in preventing the deposition of stone material on glass beads in the urinary bladder of rats 49.

Agarwal et al.,have concluded that ‘Varuna’ prevents stone formation due to anti-lithogenic activity and anti-crystallization property. The drug decreases the urinary pH towards acidic. The diuretic action of this drug attributes the metabolic correction of the serum and urinary electrolyte levels in experimentally induced urolithiasis in albino rats, thus reducing the recurrence of urolithiasis 50. Bopana and Saxena have indicated that the plant has cardioprotective and hepatoprotective activities 11.

Lupeol, biologically active pentacyclic triterpene has been isolated from stem bark of Crataeva nurvula 22. It has been reported to possess anti-protozoal, anti-inflammatory, anti-tumour, anti-microbial, cardio-protective and hepatoprotective properties 51. Toxicity of lupeol is very low. Lupeol administered orally in a dose of 2g/kg produced no adverse effects in rats and mice and after 96 hours of observation no mortality is recorded 52. Mohammadhas reported Crataeva nurvula as a source of lupeol and its use as an anti cancer dietary triterpene 53.

Geetha and Varalaxmi have isolated lupeol from stem bark of Crataeva nurvula. Lupeol and its ester lupeol linoleate were tested for anti-inflammatory property in comparison with commonly used non-steroidal anti-inflammatory drug, Indomethacin in rats. Lupeol, lupeol linoleate and Indomethacin showed decrease in paw swelling by 39, 58 and 35% respectively in adjuvant arthritis 54.

CONCLUSION: Plants have been utilized with varying success to cure and prevent diseases throughout history. The present review highlights the pharma-cognostic characteristics, phytochemistry and pharma-cological actions of Crataeva tapia L. The plant bark possessing various medicinal properties has been over exploited due to presence of an important secondary metabolite lupeol, leading to its extinction. It is quite obvious that the plant is widely used in traditional medicinal system of India. But a systematic and scientific research is required to explore the maximum potential of this plant. It is expected that this review will encourage to find its new therapeutic uses and play a vital role in the development of a herbal drug.