Crinum is an important Amaryllidaceous plant thanks to the valuable biological and therapeutic activities of its chemical constituents, especially alkaloids. Many Crinum species have been commonly used in traditional medicines worldwide. Long ago, they have been subjected to extensive chemical, cytological and pharmacological investigations. Accordingly, this work comprehensively comprises both the alkaloidal and non-alkaloidal principles of Crinums isolated from 1950 and up to now, together with various biological and toxicological studies conducted on both the total extracts and individual compounds. As being a major common class of Crinum alkaloids, the current part of this review work highlights the lycorine-type alkaloids isolated so far from this plant in addition to their distribution in different Crinum species.

INTRODUCTION:Amaryllidaceae is a great widely spread family all over the world and contains about 90 genera and 1310 species 1. The genus Crinum represents an important sector in family Amaryllidaceae with wide geographical distribution throughout the tropics, subtropics and warm temperate regions of the world 2. The name Crinum originates from the Greek "Krinon", which means "white lily", and they are commonly known as “Milk, river, or veld lilies”. This genus is related to a group of mostly southern African endemic genera, constituting the tribe Amaryllideae 3.

Like other members of Amaryllidaceae, Crinums can occupy many different habitats such as seasonally dry places, ephemeral pools, rainforests, coastal areas and rivers' banks. Worldwide, Crinum comprises about 130 species distributed in Africa, America, southern Asia and Australia. African lands enjoy most species and about twenty-two are endemic to Southern Africa.

However, recent regional revisions of African taxa indicated that around half this number (130 species), would be a better approximation 4. The uncertainty about their numbers is attributed to the difficulty in naming species correctly and the high possibilities of hybridization between different species. Botanically, Crinums are perennial herbaceous plants with giant fleshy bulbs larger in stature than most other species of Amaryllidaceae. They can grow from 1-5 feet in height depending on the species and produce a neck or a pseudo stem made up of the sheathing old leaves. Flowers usually appear in May, June or August 5.

Worldwide, Crinums have a great economic value as ornamentals due to their showy flowers. In addition, huge numbers of them are traded for traditional medicines. Crinums attract considerable attention due to their various medicinal properties such as antitumor, immunostimulating, analgesic, antiviral, antimalarial, antibacterial and antifungal activities.

Since about 1950s, Crinums have been subjected to extensive chemical, cytological and pharmacological investigations due to their richness in pharmacologically active principles 6. Phytochemical investigations have resulted in isolation of several diverse classes of compounds and have been focused predominantly on alkaloids. Phenolics prevail among the non-alkaloidal constituents identified 7.

Consequently, this work represents a comprehensive account on various classes of Crinum alkaloidal and non-alkaloidal constituents together with their structural and stereochemical differences. Additionally, their distribution in various Crinum species studied so far (Table 1) is also completely considered (out of around 130 species, only about 35 have been phytochemically investigated). The first part of our review work will concentrate on lycorine-type alkaloids as one of the most common Crinum alkaloids.

The genus Crinum is a true representative of the family as it exhibits all the main chemical traits of Amaryllidaceae. About 180 alkaloids belonging to different types of Amaryllidaceae alkaloids have been isolated and identified. Crinine-, lycorine- and tazettine-types are the most common groups among the isolated alkaloids, while montanine-type has not yet been found in Crinum species 10.

In addition to these common types of Amaryllidaceae alkaloids, Crinums yielded other types that are not common in the family e.g. Augustamine- 11-13, β-carboline- 12, Phenanthridine- 12, 14, Sceletium- 15, Ismine- 14, 16, 17 and Clivimine- 16 type alkaloids.

The isolated lycorine-type alkaloids from different Crinum species are depicted in Table 2 and Figure 1. 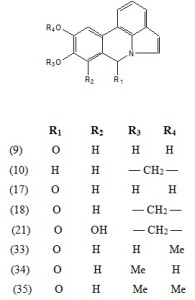 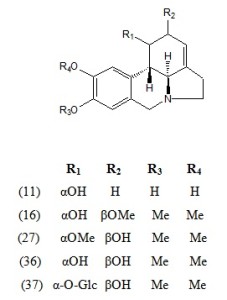 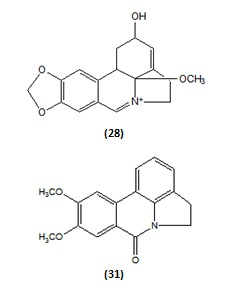 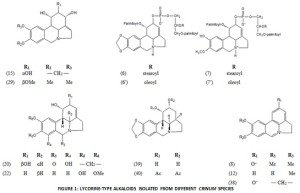 CONCLUSION: Crinums occupy an important position in plants of family Amaryllidaceae, and many of them have been used in traditional folk medicine throughout the world. The extensive survey of literature presents Crinum as an endless source of bioactive principles. Within the huge number and diverse classes of phytoconstituents produced by this plant, members of this genus are best known biofactories for Amaryllidaceae alkaloids. Phytochemical investigations led to isolation of several alkaloidal types and this current part of our review work summarized forty lycorine-type alkaloids isolated so far from Crinums as well as their structural differences and distribution in different Crinum species.