ABSTRACT: Crinum is an important and fascinating genus of the large and equally captivating Amaryllidaceae family. Owing to the valuable biological effects and therapeutic potentials of its chemical constituents, many Crinum species have a worldwide folkloric reputation. Additionally, Crinum species have been subjected to extensive chemical, cytological and pharmacological investigations. The present part of our comprehensive review work on the phytochemical and biological studies conducted on Crinum plants reviews the non-alkaloidal principles isolated up till now in addition to their distribution in different Crinum species.

INTRODUCTION: Crinums are herbaceous plants with large tunicated bulbs which produce a neck or a pseudostem made up of the sheathing bases of the old leaves 1. There are about 130 species of Crinum worldwide, occurring in America, Africa, southern Asia and Australia. This genus is related to a group of mostly southern African endemic genera, constituting the tribe Amaryllideae and about twenty-two species at present are recognized in southern Africa 2. Larger in stature than most other Amaryllidaceae species, most Crinums are suitable as landscape plants. Furthermore, Crinum species have been used traditionally to cure ailments and diseases throughout the world and some of the most noted effects are analgesic, anticholinergic, antitumour and antiviral 3.

Recently, galanthamine has been registered as an acetylcholinesterase inhibitor, which is an important approach in treating Alzheimer's disease 4. Since about 1950s, Crinums have been subjected to extensive chemical and biological investigations due to their richness in pharmacologically active principles, especially alkaloids whereas the non-alkaloidal constituents received much less attention 5. Therefore, in continuation of our comprehensive review work regarding both the alkaloidal and non-alkaloidal principles of Crinums as well as their biological activities, the present part of our work concentrates on the non-alkaloidal constituents (Table 1 and Figure 1) isolated so far together with their structural and stereochemical differences. Additionally, their distribution in various species is also completely considered.

Volatile Constituents of Crinum: In addition to the non-alkaloidal compounds mentioned in Table 1, the volatile constituents of some Crinum plants were analyzed using GC/MS technique and several compounds belonging to different structural types were identified as follows: 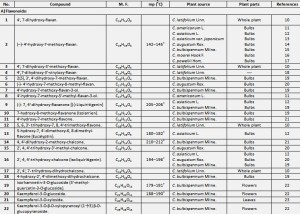 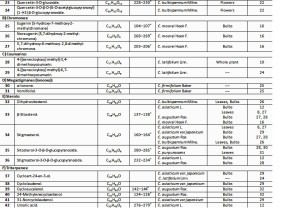 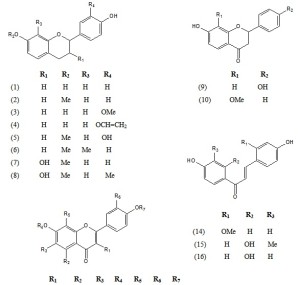 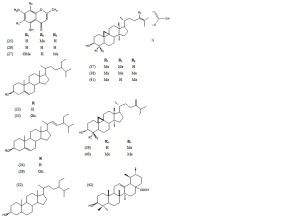 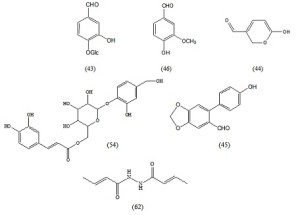 CONCLUSION: During the last decade, Crinum specieshave widely attracted the attention of phytochemists. The extensive survey of literature demonstrated that the chemical analyses of Crinums have yielded a vast array of phytocompounds including about 180 bases belonging to different types of Amaryllidaceae alkaloids. The phytochemical studies were primarily concentrated on alkaloids, while the non-alkaloidal constituents were only touched limitedly. Crinine-, lycorine- and tazettine-types were found to be the most common groups among the isolated alkaloids.

On the other hand, despite being less considered in phytochemical investigations, about 100 non-alkaloidal compounds representing eleven different structural classes were isolated and identified. The non-alkaloidal constituents isolated so far were represented by a number of flavonoids, chromones, coumarins, terpenoids, steroids, simple glycosides, ionones, alcohols, aldehydes, ketones, acids, esters and long chain hydrocarbons. Phenolics prevail among the non-alkaloidal constituents identified. Moreover, analysis of the volatiles prepared from some Crinum species revealed their richness in various compounds belonging to different structural types.

That's why, Crinum plants seem to be an endless source of bioactive principles, especially Amaryllidaceae alkaloids.