ABSTRACT: Clustered regularly interspaced palindromic repeats are the centerpiece of a robust adaptive bacterial immune system that forms the basis for the CRISPR-Cas9 genetic engineering technology. CRISPR-associated protein-9 (Cas9) is part of this immune system that seeks out, cuts, and degrades viral DNA. By taking advantage of the CRISPR-Cas9 system, a tool has been developed to delete or insert DNA into target genes in bacterial cells or mammalian cells for obtaining cells with desired traits. In this study, we used the CRISPR-Cas9 system for engineering the genome of a non-pathogenic, laboratory strain of bacteria Escherichia coli. We introduced a mutation in the gene of the bacteria which converted its phenotype from sensitivity to the antibiotic streptomycin to resistance to streptomycin; thus allowing the bacteria to grown on streptomycin containing plates.  We also investigated different transformation conditions to determine which condition gave the maximum number of transformants, which reflects the efficiency of the CRISPR-Cas9 genome editing system.

INTRODUCTION: Clustered regularly interspaced palindromic repeats are the centerpiece of a robust adaptive bacterial immune system that forms the basis for the CRISPR-Cas9 genetic engineering technology. CRISPR, or clustered regularly interspaced short palindromic repeats, can be described essentially as an adaptive immune system in bacteria, which permits the detection and removal of the bacterial cell of invaded foreign DNA, such as bacteriophage DNA 1, 2. CRISPR consists of multiple loci that contain repeats which are separated by unique spacer sequences. Each 20-base pair spacer sequence is composed of DNA fragments from bacteriophages that have attacked the bacteria or its predecessors.

When any bacteriophage injects its genetic material into the bacteria, it attempts to identify the injected DNA by matching with any of the spacers present in its library, and then proceed to cut it using one of its CRISPR-associated protein (Cas) enzymes, thus degrading the viral genome and neutralizing its threat 3. By taking advantage of the CRISPR-Cas9 system, a tool has been developed to delete or insert DNA high degree of precision and efficiency into mammalian cells for disease modeling and therapy or into bacterial cells with for obtaining cells with desired traits 4, 5.

The CRISPR-Cas9 has 4 components. These are (1). Cas9 Protein: It binds the tracrRNA-crRNA complex, which includes the gene targeted for editing. Once a gene match is found, the Cas9 protein cuts the DNA. The cell responds to the cut by repairing the DNA damage; (2) crRNA (CRISPR RNA sequences) which are transcribed portion of the CRISPR locus that include the spacer, its adjacent palindromic repeat; (3) tracrRNA (transactivating RNA sequences): which binds the crRNA and aids the system in identifying the foreign DNA and matches (based on complementarity) the DNA segment in the genome which has been targeted for editing. The final complex that includes crRNA and tracrRNA binds to Cas9 protein (which degrades the DNA if a match is found) and thus guides it to its target and (4) Template DNA:  Once the Cas9 protein makes a cut on the gene targeted for editing, the cell repairs the DNA through homologous recombination by incorporating the template DNA containing the desired mutation to be introduced 6, 7, 8. 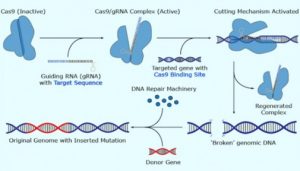 Fig. 1 shows a diagram of the mode of action of the CRISPR-Cas9 system. Since initial application of CRISPR-Cas9 system in editing the human genome in 2013, there has been an explosion in research studying the use of this technology for transcription regulation, gene editing, genome imaging, functional genomics, epigenetic modification, correcting defective genetic mutations, establishing disease models and treating disease and therapeutics development 9, 10.

CRISPR-Cas9 system is also being used in increasing frequency to understand the molecular basis of different biological functions in both Gram-positive and Gram-negative bacteria. The genome was edited to delineate the molecular basis of the horizontal gene transfer system in gram-positive bacteria Staphylococcus aureus and acquisition of prophage in Streptococcus pyogenes. It has also been used to study transformation mechanism in Neisseria, antibiotic resistance mechanism and biofilm production in Pseudomonas aeruginosa 11, 12, 13, to mention few.

Streptomycin is a bactericidal antibiotic of aminoglycoside class acting mainly on gram-negative organisms. It is a protein synthesis inhibitor. It binds to the small 16S rRNA of the 30S subunit of the bacterial ribosome, interfering with the translational speed and accuracy with eventual inhibition of protein synthesis and death of bacterial cells. Here, we report that an rpsl gene (mutation in this gene confers resistance to streptomycin) of a laboratory strain of non-pathogenic E. coli strain was edited with CRISPR-Cas9 technology, converting it from streptomycin sensitive to streptomycin resistant phenotype.

Competent Cell Preparation: ‘Competent’ means the bacterial cells that can intake foreign DNA. Bacterial cells can be made competent by treating the cells with chemicals polyethylene glycol and calcium chloride. These chemicals increase the permeability of the cell wall and cell membranes, and also neutralize the negative charges of both DNA and cell membrane (thus minimizing repulsion) and hence facilitating the entrance of foreign DNA.

In this study, we used 10 % polyethylene glycol (PEG 3350) and 25 mM calcium chloride to make the E. coli cells competent. A loop full of bacterial cells grown overnight on LB agar plates were suspended in 100 microliters of PEG3350 plus calcium chloride solution contained in a microfuge tube and kept on ice. Alternatively, we also used cells from the liquid culture in LB broth for competent cell preparation.

Heat Shock Step: The component cell mix tube was then transferred to a water bath set at 42 °C and incubated for 30 sec. Then 500 microliters of LB broth was added to the tube and incubated at 30 °C for 2-4 h. Then the cells (transformants) were plated on LB agar plates with and without streptomycin to determine whether gene editing has taken place or not.

Template: The template DNA used in this study was the gene encoding the ribosomal S12 protein (rpsL gene) which is the target gene for the antibiotic streptomycin.  This template DNA has a single base change from an Adenine (“A”) to a Cytosine (“C”). This change causes the DNA to code for a Lysine instead of a Threonine in this protein. This change prevents streptomycin from binding to and disabling the protein, which allows the bacteria cell to grow on media containing the drug.

RESULTS: Our initial attempts to introduce single mutation in the rpsL gene of E. coli were unsuccessful; there was no growth of streptomycin containing plate which would indicate that our desired mutation at the streptomycin resistance gene has not occurred. Although we followed the recommended protocol for carrying out the CRISPR-Cas9 mediated mutation the target gene (rpsL gene), it appeared that no growth of transformed cells was most likely due to either (a) desired mutation did not take place or (b) mutation did occur but the gene is not expressed to allow for bacterial growth on antibiotic-containing plate. To troubleshoot the protocol, we attempted a modification of the transformation protocol.

TABLE 1: RESULTS OF THE EXPERIMENTS CARRIED OUT USING CRISPR-Cas9 KIT FOR INTRODUCTION OF MUTATION IN THE rpsL GENE OF E. COLI

It is important to note that initially, we tried using cells from (a) directly from plates (incubated overnight at 37 °C) and (b) also from a 3 h liquid culture in LB broth grown at 37 °C, for preparation of competent cells before transformation experiments. Only cells taken from plates for competent cell preparation gave positive results in transformation experiments.

By successfully modifying the different incubation steps prescribed in the experimental protocol, we overcame the initial set back of the procedure not working Table 1. The most likely reason for this could be that longer incubation at 30 °C (16 h instead of 2-4 h) in LB broth permitted appropriate recovery of the bacterial cells from transformation shock and resumption of normal growth. The suggested period of 2-4 h was most likely not enough. This data indicates that just modification of the duration of incubation plays a critical role in gene expression, which needs to be established before initiating any genome editing procedure using CRISPR-Cas9 tool.

To summarize, we have successfully established the CRISPR-Cas9 genome editing tool in our laboratory by editing the genome of E. coli. This will enable us to undertake further studies in understanding the molecular basis of antibiotic resistance and virulence of pathogenic microorganisms and also functional analysis of mammalian genomes 9, 10.

CONCLUSION: CRISPR-Cas9 genome editing has revolutionized all areas of biomedical sciences. It brings great promise in the application of this technology both in bacterial and mammalian systems. To fully realize the benefits of this advanced technology, it is imperative that this methodology is established and used in the different Universities and research laboratories of UAE.