INTRODUCTION:Among the tablet excipients, lubricants are extremely important for improving the quality and manufacturing productivity of the tablets. Lubricants reduce the friction between the tablet edge and the die wall during compression and facilitate ejection by forming a film of low shear strength between the die wall and tableting mass 1, 2.

Magnesium Stearate exists as “Plate-like” crystals (or lamellae) stacked together like a deck of cards. As the blending process proceeds, plates continue to shear off and coat adjacent particles of granules, drug or other excipients. The higher the concentration of Magnesium Stearate used or the longer this blending continues, the more complete this coating of the adjacent particles will become.

It has low friction coefficient and high covering potential. The lubricant efficiency and extent of surface coverage depend on the mixing time of the tablet mass with Magnesium Stearate because of its laminar structure 3.

Therefore, the concentration of the lubricant in the formulations and the lubrication time should be balanced in terms of the adverse effects of the used lubricant. Generally, lubricants are added to the premixed powder mixture as a final step and mixed for only a few minutes. But even small changes in mixing time and lubricant amount can significantly affect the product performance and quality properties.

As a result of over-lubrication, the mechanical strength of the tablets can decrease and the dissolution of the drug may worsen. Therefore, experiments should be performed to define lubricant use level and optimize the mixing process.

The particle size and specific surface area of Magnesium Stearate may be the key factors influencing its lubrication efficiency. In practice, the particle size, instead of the surface area, is much more often used as a measure of the lubricant characteristics. It is mainly due to the fact that particle size measurement of a powder material is faster, easier, and less controversial 7.

Metformin is the only currently available oral antidiabetic or hypoglycaemic agent which acts predominantly by inhibiting hepatic glucose release with an absolute oral bioavailability of 40% to 60% 8. Gastrointestinal absorption occurs mainly in the upper intestine with peak plasma concentrations (Cmax) reaching after 2 to 3 h 9. Metformin HCl is a BCS class III drug (Highly solubility and Low permeabiality).

The present study was designed with an objective of further evaluating the influence of Lubrication process on Tablet performance with three independent variables: Level of Lubricant, Lubricant Particle size and Lubrication Time on various selected responses. The measured responses from tablets were the Carr’s Index, Hausner ratio, percentage of friability, hardness, disintegration, and percent drug dissolved in 10, 15, 30 and 45 min.

Further, it was aimed at optimizing independent variables to achieve similar dissolution profile of Reference product.

Materials: Metformin HCl was manufactured in Granules India Ltd, Hyderabad, (India). Povidone K30 and Povidone K90 were procured from ISP, USA. Pregelatinized starch was procured from Roqutte, (USA). Magnesium Stearate was procured from Nitika Chemicals, Nagpur, (India) and Mallinckrodt baker, USA. Glucophage 1000 mg tablets were purchased commercially from market for comparative study. All other reagents and chemicals were of analytical grade and used as received.

Granulation: 2.79 kg Metformin HCl was mixed with 0.12 kg of Povidone K30 in an octagonal blender (Shan engineers) for 5 minutes. Binder solution was prepared by dissolving 0.09 kg Povidone K90 and  0.12 kg Povidone K30 in 0.80 kg of Purified hot water at 60-65oC. Metformin granules was made in Fluidized bed Processor (Glatt FBE-5) having 5L capacity. Granulation was done by spraying the binder solution using top spray method. The process parameters were kept same for all the experiments as given in Table 1.

Granules were dried in the FBP upto LOD 0.8-1.5%w/w and sifted through 16# and sieve tops were milled through multimill using 1.5 mm screen. Granules were lubricated in Octagonal blender of 10 L capacity (Shan Engineers).

Determination of Flow Properties of Lubricated Granules: The bulk density of lubricated granules was determined by pouring 100.0 gm of granules into 250.0 mL graduated measuring cylinder through a funnel. The tapped density was measured by USP method 1 using tapped density apparatus (Electrolab, India). Carr’s index (CI) was estimated from the bulk and tap volumes (Vbulk and Vtap) according to Eq. 1.

Hausner index (HI) was calculated from the BD and TD values (Eq. 2).

Hardness Test: Twenty tablets taken randomly from each batch were tested for hardness using hardness tester (Pharmatest, Incorp). The average hardness (Kp) and standard error were calculated for each batch.

Disintegration Test: One tablet was placed in each tube of the basket rack assembly and a disc was added on each tube. The rack was immersed in distilled water at 37±2ºC and the apparatus (Electrolab, India) was operated at a frequency rate between 29-32 cycles per minute. The time (min) to disintegrate and fall of the tablets through the screen was recorded 10.

Dissolution Test: Dissolution studies on the tablets of Metformin HCl were conducted in USP Apparatus 1 (basket method) (Electrolab TDT-08L, India) with three replicates, according to the USP monograph 11. The dissolution medium was 1000 mL of pH 6.8 phosphate buffer at 37±0.5oC. The basket rotation speed was kept at 100 rpm. In all experiments, 5 mL of dissolution sample was withdrawn at 5, 10, 15, 30, and 45 min and replaced with an equal volume of the fresh medium at 37±0.5oC to maintain a constant total volume. Samples were assayed by UV spectrophotometry at the wavelength of maximum absorbance at about 233 nm (Shimadzu UV-2450, Japan). Cumulative percentages of the drug dissolved from the tablets were calculated.

In order to compare the drug release profile of formulations with the reference product, similarity factor (f2 value) has been calculated using the following formula-

The similarity factor is a logarithmic reciprocal square root transformation of the sum of squared error and is a measurement of the similarity in the percent (%) of dissolution between the two curves. Two dissolution profiles are considered similar when the f2 value is ≥ 50 12.

Lubricated Blend Flow Characteristics: Although it was physically observed that on increasing Magnesium Stearate concentration, the flow of the lubricated blend was slightly decreased, through hopper to turret, yet no significant difference was observed on CI and HR.

In next set of trials (F10-F18), with Magnesium Stearate (B) having reduced particle size and larger surface area, we observed that increase in the concentration and blending time have significant effect on tablets physicochemical properties due to reduced particle size of Magnesium Stearate. In trials F1 and F10, at the same level of concentration of Magnesium Stearate (A and B) and blending time, the disintegration time of the tablets were increased from about 9 minutes to about 14 minutes. In trials F17 and F18, tablets were showing capping problem when hardness was tried to keep in between 12-16
Kp. Therefore, tablets were compressed at rather lower hardness. Friability was also observed somewhat higher than formulations F1-F9.

Formulation having 0.75% w/w Magnesium Stearate (B) and 15 min blending time showing Similarity factor 92.2. With higher concentration of Magnesium Stearate 1.0% w/w and 1.25% w/w with blending time 10 and 15 minutes, respectively nearly same result was observed. With 1.25% w/w concentration, on increasing blending time the drug release from the tablet was incomplete in desired time frame as well as capping problem was also observed due to over coating of hydrophobic layer on granules.

TABLE 3: COMPOSITIONS OF THE STUDIED FORMULATIONS AND THE MEASURED RESPONSES 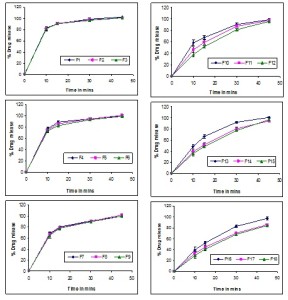 FIG. 1: DISSOLUTION PROFILE OF ALL THE FORMULATIONS

CONCLUSION: This study concluded that the change in particle size hence surface area of Magnesium Stearate, along with concentration and lubrication time, can affect the properties of a blend or tablets significantly, such as disintegration time, hardness and most importantly dissolution. The tablets, containing Magnesium Stearate of larger particle size, have shown the highest percentage of drug release at initial time points as a consequence of poor hydrophobic coating on granules of highly soluble drug. However, tablets contain Magnesium Stearate with smaller particle size and larger surface area had shown a slower drug release profile.

The study investigated that by selecting appropriate particle size of Magnesium Stearate along with some other factors like lubrication concentration and blending time, we can achieve the desired release profile and a very high quality, cost effective formulation.