It has been reported that either a foreign agent or some alteration in control of cellular responses is involved in the synovial inflammation 4. Cytokines are responsible to initiate and regulate immune responses. Cytokines also play a major role in arthritis 5.

The presence of various cytokines in the cells of synovial lining and sublining, including type a synoviocytes and other macrophage- like populations have been demonstrated 6. Dysregulated expression of tumor necrosis factor-α (TNF-α) in experimental animals has been shown to cause destructive arthritis 7.

Nyctanthes arbortristis (Family: Oleaceae) is one of the Indian medicinal plant. Nyctanthes arbortristis is a shrub or a small tree growing to 10 m tall, with flaky grey bark. It has its distribution mainly in East Asia. It is also known by other names such as Night-flowering Jasmine, Harshingar, Parijat, Bruscia, Pariaticu, Parilium and Scabrita 17 etc. The plant has been extensively used for the preparation of decoction of leaves by Ayurvedic physicians for the treatment of obstinate sciatica, malaria, intestinal worms and as a tonic, cholagogue and laxative 18.

Crocus sativus L. (Family: Iridaceae) commonly known as saffron, is a perennial stemless herb which is cultivated in several countries like India, Iran and Greece. In India, it is mainly cultivated in Kashmir and Uttaranchal. The dried red stigmas of the flower are mainly used for therapeutical purposes such as anticonvulsant, antidepressant and antitumor activities 19. The Crocus sativus stigmas are mainly used for therapeutic purposes. Saffron extract has also been shown to have protective effects on genotoxin induced oxidative stress in swiss albino mice 20.

In last two decades, alternative medicine has been practiced as an effective tool for therapeutic purposes. Among alternative medicine methods, herbal remedies are now widely accepted therapy to arthritis 21. Recent studies from our laboratory have revealed the repair of oxidative stressed state using anti-oxidants 22, and the control of this stress using herbal preparations 23. Also, Nyctanthes arbortristis extract has been proven to reduce inflammatory cytokines in adjuvant induced arthritis 24. In the present study, we have tried to assess simultaneous dosing of NAT leaf extract and Crocus sativus extract for anti-inflammatory property. This study will help in understanding the mechanism of action of simultaneous dosing of different herbal extracts in an experimental disease.

Preparation of Nyctanthes arbortristis leaf extract (NLE): For our experiment, leaves of Nyctanthes arbortristis (NAT) were collected in the month of January and February, from the tree growing in the premises of Institute (Fig.1). A sample specimen (Bnp101) of the plant was deposited to National Botanical Research Institute herbarium (LWG), Lucknow, India for species authentication. Further, leaves were dried in shade and powdered. The powder was macerated with 95% ethanol, the extract was filtered and the solvent was evaporated using lyophilizer. The residue was stirred vigorously with distilled water; the mixture was allowed to stand for 30 min and filtered.  The filtrate was again lyophilized. The yield of extract from leaves was 6.28%. The stock solution was appropriately diluted in sterile distilled water and administered as oral dose of 23.72mg/kg body weight to each mouse. The dose was selected as effective one from our previous study 24. 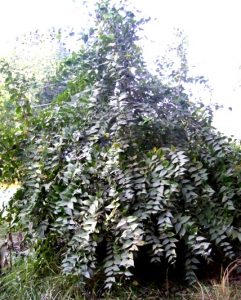 Crocus sativus L. stigmas were procured from Sigma, USA (Fig. 2). 4.0 grams of stigmas were macerated in 70% ethanol for three days. The mixture was then filtered and collected. The solution thus obtained was lyophilized. As a result, the extract yield was 48.2%. The dried powder was then reconstituted to get desired concentration for experimentation i.e, 100 mg/kg body weight. The dose was selected as effective one from our previous study 23. 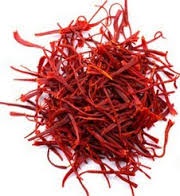 Experimental animals: Female Balb/c mice weighing 25-30 g were used throughout the studies. Prior permission for the experiment was sought from the Institutional Animal Ethics Committee. Animals were kept in separate cages under standard conditions of the animal house, and fed pellet diet and water ad libitum.  Mice were divided into 4 groups of 12 animals each. The group I comprised of normal mice, group II comprised of arthritic mice receiving distilled water, group III comprised arthritic mice receiving NAT leaf and CS extract daily till day 47. The NAT leaf extract (NLE) was administered in morning and CS extract (CSE) was administered in evening, the time interval of 6 hrs was maintained. Group IV comprised arthritic mice receiving acetylsalicylic acid (ASA) at the dose of 200mg/kg body weight for 47 days.

Measurement of Footpad Swelling (edema): Footpad swelling in mouse was measured with the help of geometric formula of eclipse circumference: 2π × Ö(a2 + b2) / 2, where a and b are measures of diameter at two different planes taken with the help of a Vernier caliper.

Preparation of Joint Homogenate: On day 2, ankle joint from normal animals were dissected and homogenate was prepared. On day 47, Inflammatory site on the joints ranging from 4-5mm was dissected out, weighed and a 10% homogenate was prepared in ice cold phosphate buffered saline (PBS) containing 0.5% Tween-20. The homogenates was centrifuged at 2000g for 10 min and the supernatant was filtered using 0.2 mM Millipore filters and used for cytokine assay.

Quantitative estimation of anti-inflammatory cytokine: ELISA based IL-10 cytokine analysis kit was procured from Ray Biotech, Inc. USA, and IL-10 was estimated, in the joint homogenates, using solid phase sandwich ELISA. The protocols laid in the technical bulletin of the manufacturers were followed. Plates were read on iMark microplate reader (Bio-Rad, CA).

Statistical analysis: Student ‘t’ test was performed to evaluate the significance of the difference in the mean values of extract treated and untreated group. P<0.05 was considered as significant.

Effect of NLE and CSE on footpad swelling: We induced arthritis in mice by one injection of FCA on day 0 and the second injection on day 12. First injection resulted in formation of primary footpad edema. Between day 10 and 12, the primary swelling appeared reduced in size but didn’t reverted to normal size. However, a pale granulomatous appearance was observed.

On day 12, second injection of FCA at the same site was given which led to the formation of secondary swelling, persisting more than four weeks that spread on the other hind limb but to a lesser extent. Between days 45 and 47, well defined arthritic symptoms were observed, such as secondary swellings on the right and left hind limbs with mild distortion of the phalanges. On day 47, we observed non-significant change in the footpad swelling in normal mice, while, the simultaneous dose of NLE and CSE resulted in significant reduction in the footpad swelling as compared to AIA mice (Table 1).

TABLE 1: EFFECT OF NLE AND CSE ON FOOTPAD SWELLING IN AIA MICE

asignificant (p<0.05) in comparison to normal mice on the respective time point;

bsignificant (p<0.05) in comparison to arthritic mice on the respective time point;

asignificant (p<0.05) in comparison to normal mice on the respective time point;

bsignificant (p<0.05) in comparison to arthritic mice on the respective time point.

DISCUSSION: The present study is an attempt to observe the anti-inflammatory effect of simultaneous dose of NLE and CSE in experimentally induced arthritic mice. In adjuvant induced arthritis, there is a series of reactions executed by host in effort to prevent tissue damage and destroy the infective organism by activating the repair process that are necessary to bring organism to normal functioning  25.

This process is commonly known as acute phase response (APR). A sequence of events is thus initiated, leading to the release of soluble mediators that mobilize the metabolic response of organism. Bacterial products activate macrophage, which in turn release different cytokines such as TNF and IL-1. These cytokines possess pleiotropic activity and have been implicated as major players in arthritis 26. The release of these cytokines enhances the inflammatory response and worsens the tissue. Thus, the APR follows a sequence of events in which macrophages and platelets are activated and thus cytokines are released 27.

In present experiment, we have observed a visible as well as quantifiable reduction in footpad edema of AIA mice receiving simultaneous dose of NLE and CSE. This indicates that both the extracts possess anti-inflammatory potential even when they are administered on the same day. This may be contributed to their synergistic action. In our previous study, we have observed the anti-inflammatory action of NLE 24 and CSE 23, individually. Various workers have reported the anti-inflammatory activity of Chinese and Korean herbal plants in arthritis. There are several studies that support the use of herbal preparation for reducing arthritic symptoms.

A research reported the anti-inflammatory activity of Celastrus orbiculatus Thunb. in carrageenan-induced mouse where significant reduction in paw edema was seen, when the compound (100 mg/kg) was orally administrated 28. Furthermore, studies on active component of Tripterygium wilfordii hook F (TWHF), triptolide produced promising immunosuppressive and anti-inflammatory action 29. Later on, a polyherbal preparation resulted in increased mobility and decrease in paw edema after 90 days treatment 30.

Several researchers have been working on the combined dose of herbal preparation for their therapeutical effect in various diseases. Wang and Tao demonstrated the clinical efficacy of YTR combined MTX + LEF in the treatment of RA as better than using Western medicine alone 34. In another study, Jie and researchers demonstrated that Biqi Capsule (BQC) combined with MTX showed better clinical efficacy than use of BQC or MTX alone 35. Similarly Chen and coworkers observed that Yiqi Fumai Injection (YFI) combined hydroxychloroquine sulfate tablet showed better effects in treating Sjogren's syndrome patients than using Chinese medicine or allopathic medicine 36.

In another study, Wang and his team evaluated the clinical efficacy and safety of bushen quhan zhiwang decoction (BQZD) combined methotrexate (MTX) in treating rheumatoid arthritis (RA) and found that BQZD could enhance the efficacy and reduce adverse reactions of MTX through synergistic effects with MTX 37.

The anti-inflammatory potential of NLE and CSE may be attributed to the presence of active ingredients in the Nyctanthes arbortristis leaves and Crocus sativus stigma. There are many phytochemical investigations of NAT revealing the presence of iridoid glycosides (such as arbortristoside A, arbortristoside B and arbortristoside C), Nyctanthic acid, Lupeol and alkaloids in leaves 38, Oleanolic acid and β-sitosterol in seeds of this plant 39. Several researchers have demonstrated the presence of various active constituents such as crocin, crocetin, safranal, flavonoids 40, 41 etc. Thus, anti-inflammatory property of saffron extract may be attributed to synergistic action of these active constituents 42.

CONCLUSION: Rheumatoid arthritis is an autoimmune, chronic inflammatory disease that targets the synovial membrane, as well as extra-articular tissues. Although RA is a disease of unknown etiology, yet it is quite well established that lowering of anti-inflammatory cytokines perpetuates the progression of arthritis, due to impaired cytokine system in the tissue. In the present study, on the one hand, significant reduction in footpad edema was recorded, while on the other hand, elevated levels anti-inflammatory cytokine IL-10 was observed in the NLE and CSE treatment receiving inflammed joints of arthritic mice. Thus, present study reveals the effectiveness of NLE and CSE for its anti-inflammatory potential during experimental arthritis. However, further studies are needed to completely understand the anti-inflammatory mechanism of these herbal extracts.