CRUCIAL ROLE OF NITROGEN IN IN- VITRO REGENERATION OF PHYLLANTHUS AMARUS SCHUM. AND THONN.

CRUCIAL ROLE OF NITROGEN IN IN- VITRO REGENERATION OF PHYLLANTHUS AMARUS SCHUM. AND THONN.

Nitrogen plays a pivotal role in growth and differentiation of cells of Phyllanthus amarus Schum. and Thonn. Both form and amount of nitrogen in nutrient medium have significant effects on the rate of cell growth and differentiation. In this study, effects of different inorganic nutrients (KNO3  and NH4NO3) and organic nutrients (glycine) on regeneration of P. amarus were evaluated. Murashige and Skoog’s medium (MS) was used as basal medium along with plant growth hormones and different concentrations of nitrogen. Among the various growth hormones tried, BAP (0.5 mg/l) gave maximum number of shoots (17.33±0.86) after 3-4 weeks of inoculation. However, various strength of KNO3, NH4NO3 and glycine were optimized in the medium in order to get the maximum number of shoots, nodes per shoot, shoot length as well as the size of leaves respectively. Amongst all modifications, less or more, MS medium with standard amount of nitrogen source was found to be most effective. The shoots regenerated on MS medium along with BAP (0.5 mg/l) were subjected to their elongation on the same medium and their root induction was done on half strength MS medium along with IBA (0.5 mg/l). These complete plantlets were hardened and acclimatized in natural conditions. 80% survival rate was observed under field conditions.

INTRODUCTION: Tissue culture technique is an alterative method to obtain rapid clonal multiplication. Growth and morphogenesis of plant tissues under in vitro conditions are largely influenced by the composition of the culture media. Mineral nutrients are one of the most important and basic components of plant tissue culture. Nitrogen assimilation and its role in plant growth and development play a pivotal role in establishing and understanding of cell differentiation in plants. Both the form and amount of nitrogen in the in vitro medium have significant effects on rate of cell growth, differentiation and cell totipotency 1.

In plant nutrient medium, nitrate ions, ammonium salt, amino acids and complex organic compounds supply nitrogen. Nitrate ions and ammonium salts are the good sources of nitrogen because they can be absorbed and metabolized by the cells easily, which further lead to root branching, breaking of seed and bud dormancy and stop apical dominance. Hence, nitrogen in the form of NH4+ and NO3- is the dominant mineral nutrient in most plant tissue culture formulations, in both proportion and the concentration of NH4+ and NO3-. Optimization of such compounds stimulates regeneration in recalcitrant cultivars also 2.

The potential benefits of optimizing the nutrient components of culture media for a particular response are well documented across a wide range of plant species and applications. For example, the concentration of NH4+ and NO3- affects numerous in vitro responses including the development of somatic embryos 3, 4, 5 the efficiency of plant recovery after ovule culture 6, shoot regeneration 7, 8, regulation of growth and biomass of bioreactor-grown plantlets 9, and also controls the rate of root initiation in shoot cultures 10.

Phyllanthus amarus Schum. and Thonn. commonly known as Bhui amla , is  a herbaceous medicinal plant belonging  to family Euphorbiaceace. It has been traditionally used in the treatment of a variety of ailments such as jaundice, asthma, ulcer, hepatitis, tuberculosis, malaria, dysentery, gonorrhea, syphilis, cough, diarrhoea, vaginitis and urinary diseases and other hepatic disorders 11, 12, 13, 14. It has immense medicinal properties like antidote against liver diseases, antiviral properties, antioxidant, hepatoprotective, anti inflammatory and strong inhibitory effects against neurogenic diseases 15, 16, 17.

The present research endeavor emphasizes on the role of nitrogen source in tissue culture of P. amarus, which would reveal the understanding of its plant physiology regarding their growth, differentiation and development for researchers and plant growers in laboratory as well as field conditions.

MATERIALS AND METHODS: Tender twigs were collected from field grown juvenile plants of P. amarus  and sectioned into 0.5-1.5 cm long nodal segments. They were washed under running tap water for 30 minutes and then treated with a solution of the teepol (1% v/v) for 10 minutes. Then they were rinsed with sterile double distilled water at least thrice to get rid of teepol and finally surface sterilized with HgCl2 (0.1% w/v) for 2 min. Lastly, the material was washed 3 -5 times with autoclaved distilled water to remove any trace of HgCl2. For shoot culture initiation, full strength MS 18 was taken as basal medium containing 3% sucrose, 0.8 % agar and supplemented with various cytokinins like BAP and Kinetin. The media were adjusted to pH 5.8±0.2 and autoclaved at 1.1 kg/cm2 for 20 minutes at 121°C.

Cultures were incubated at 25±1°C with a photoperiod of 16 hours at 2000- 2500 lux of cool white fluorescent light. Shoots were initiated after 5-7 days of inoculation and then subcultured regularly on fresh medium at four week interval.

Experimental Design: After the media were optimized with hormones they were then allowed to test in 7-modified MS media (A, B, C, D, E, F, G), which differed in their nitrogen sources i.e., NH4NO3, KNO3 and glycine formulation (Table 2). After 3-4 weeks of inoculation, the regenerated shoots were then studied morphologically and effects of nitrogen on growth and differentiation were evaluated.

Establishment of optimized culture condition, root culture and hardening: After the concentrations of all the nitrogen sources were optimized, the shoots were further subcultured regularly on the same optimized nutrient medium for development and shoot multiplication. These in vitro elongated shoots were taken out carefully from the culture vials and transferred to half strength MS medium with different concentrations (0.05- 2.5 mg/l) of auxins such as  IBA, IAA and 2,4-D respectively, for root induction.

The plantlets were taken out from culture vessel without damaging the delicate root system and rinsed with distilled water to remove the adhering agar and then transferred to polycups containing vermicompost and autoclaved soil (1:3). Polycups were covered with inverted glass beakers to maintain high humidity and kept in growth chamber. They were gradually exposed from artificial environmental conditions to natural conditions for their acclimatization.

RESULTS AND DISCUSSION: During the present research endeavor, maximum number of shoots was obtained on MS medium supplemented with BAP (0.5 mg/l) after 3-4 weeks of inoculation [Table 1, Figure A (1)]. Similar observations were reported in many other plant species such as Phyllanthus urinaria 19 and Codiaeum variegatum 20. However, in contrast to this, Captan et al. 21 observed that Kn proved to be the best for maximum shoot proliferation in Phyllanthus urinaria.

TABLE 1: EFFECT OF CYTOKININS (BA AND KN) ON SHOOT INITIATION FROM NODAL STEM SEGMENTS IN PHYLLANTHUS AMARUS SCHUM. AND THONN.

*Values are 95% confidence limits for Mean and mean values within the column followed by the same letter are not significantly different by the Tukey’s test at 0.05% probability level.

The mineral nutrient needed in abundance by plants is nitrogen 22. Nitrogen is an essential element in modern mineral salt formulations and is present in the form of both nitrate (NO3-) and ammonium (NH4+) ions. Murashige and Skoog medium 18 contains two nitrogen salts, ammonium nitrate (~1650 mg/l) and potassium nitrate (~1900 mg/l), giving a total of ~3550 mg/l for both nitrogen forms. This is considered to be a fairly high nitrogen concentration, which is supra-optimal for many plant species. The lack of nitrogen results in decreased and malformed development of plants.

In the present study, extensive observations were made for nitrogen effects, when nitrogen source as NH4NO3, KNO3 and glycine were added to the MS medium in different concentrations [Table 2]. It was observed that nitrogen plays a crucial role in growth and differentiation. However, explants were not able to grow, neither they showed any morphological changes, when they were put on MS medium devoid of nitrogen source.

Nevertheless, in Clematis pitcheri, lower level of nitrogen is sufficient for better shoot formation 24. The studies with the incorporation of nitrogen salts in various concentrations, showed the shoot proliferation in all treatments. However, morphological parameters were also examined accordingly [Table 3, Figure A (2)]. Fine-quality new shoots were produced on media supplemented with NO3- alone as the N source.

They produced dark green leaves. There are many reports available where, NO3- was used as the single N source and successful regeneration was obtained in various tissue culture systems 25, 26, 27. Furthermore, a very small change in multiplication and shoot morphology was observed, when glycine was added along with NO3- ions.

*Values are 95% confidence limits for Mean and mean values within the column followed by the same letter are not significantly different by the Tukey’s test at 0.05% probability level

When NH4+ was used as the sole source of N, the multiplication rate was very low. The quality of the new shoots was poor, with yellowish color and frailness being the common feature. Ammonium used as the sole source of N appeared to have a negative effect on regeneration and growth of new shoots of A. polyphylla 28. Although N assimilation is associated with the reduction of NO3- to NH4+, many plant species showed inhibition of morphogenesis and growth, when ammonium was used as a sole source of N, like Nicotiana tabacum 29, 30 Oryza sativa 31, Solanum tuberosum 32 and Eucalyptus marginata 27.

The inhibition of morphogenesis and growth in response to application of NH4+ as the sole N source has been attributed mainly to changes in medium pH and toxic effects of free NH4+ ions. Ammonium nutrition is associated with acidification of the medium. Low pH affects the availability of mineral nutrients in the medium, with most of them becoming limited, when pH falls below 5 33 and therefore, restricting explant growth. Free NH4+ ions can cause toxicity within plant tissues. The highest multiplication rate with good quality new shoots, green to dark green leaves was observed on media containing both NH4+ and NO3-, respectively along with glycine at the normal concentrations. However, the increase and decrease in the concentrations of these three parameters showed significant decrease in shoot proliferation.

Thus, it was revealed from the present study that in the MS medium, N mixture (both organic and inorganic) was superior to any single N source for regeneration and growth of the shoots. Other studies also found that in MS medium, N regime was more efficient than a single N source 32, 25, 26.

The optimized concentration of nitrogen in MS medium with BAP (0.5 mg/l) was then used for further subculturing to get better morphological responses and was regularly maintained this way [Figure A(3)]. They were then further transferred to half strength MS medium fortified with IBA (0.5 mg/l) [Table 4, Figure A (4)]. Omran et al. 34 also noticed in vitro rooting on IBA in Lins culinaris Medik., which is in consonance to the present research work. In contrast to this, Captan et al.  35 reported that NAA and IAA enhanced root proliferation in Phyllanthus caroliniensis.

*Values are 95% confidence limits for Mean and mean values within the column followed by the same letter are not significantly different by the Tukey’s test at 0.05% probability level

The in vitro raised plantlets were taken out from culture bottles for hardening and acclimitization which was done by the method described in “Materials and Methods”. In conclusion, N is an essential nutrient for regeneration and development of P. amarus shoots, and no proliferation and growth occurred in the absence of N. The results presented here clearly indicate the diverse responses to the various forms of N supplied, reflecting the previously overlooked importance of this nutrient in determining plant morphology and morphogenesis in vitro. 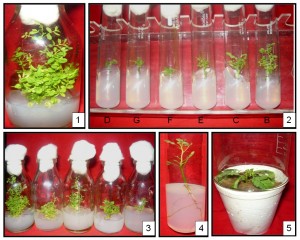 ACKNOWLEDGEMENT: The author wish to dedicate this paper to her guide Prof. Amla Batra, Emeritus Scientist, Ex-Head Department of Botany and Ex- Principal of Maharani College for her valuable support, guidance and cooperation in fulfilling all the experiments during the research work.