ABSTRACT: Tissues can be preserved for centuries under the conditions of extremely cold temperatures along with the neurological functions of the human brain. It is possible with the process of vitrification; here the cells of the brain are cooled to the cryogenic temperature without the formation of ice. Damage caused due to this process is theoretically reversible as like before, but practically, rejuvenation is possible only by the foreseeable technology which is specific. Injury caused to brain because of low or stopping of blood flow which is as a result of complex series of process which takes more than 6min of time to complete the limit of resuscitation technology. Damage of blood vessels occurs first then the brain tissues if the process of rejuvenation occurs for more than 6 min. For permanent death of neurons, many hours are required. The process of cryopreservation provides a chance for resuscitation by having an opportunity between legal death and permanent loss of life in both humans and animals. At appropriate conditions, the time is taken between the beginning of clinical death and the start of cryopreservation procedures should be less than 1min. The process of cryonics occurs indirectly, but its evidence is applied in the different sectors of science. Any complex changes which are due to aging if reversible in the future, then the same changes are also reversible, which are caused due to stopped blood flow and cryonic process and provides life-saving results in the people who seeks medical help.

INTRODUCTION: Cryonics is derived from the Greek word “kryos” which means “cold” 1. The process of cryopreservation begins in the year of 1954 to human cells with frozen sperm, thawed and used to inseminate 3 women. Cryonics is present in practice which involves the preservation of dead bodies of human being and animals at very low temperatures called as cryonic temperature by having a belief in future science to restore them to healthy living condition. In present times cryonics is performed only after the declaration of legal death of the cryonic subject 2.

By the usage of cryoprotective agents, the freezing behavior of cells gets differed and affects the rate of water transport, nucleation, and ice crystal growth. Cryonics concept is based on several key concepts like:

In cryonics, the persons are cooled at a temperature below -120°C to protect tissues with small changes in tissue structure after cardiac arrest. The freezing technique has been scientifically proposed in humans by Michigan professor “Robert Ettinger” and wrote “The prospect of immortality” 3.

Primarily to the cryonic person, respiration and circulation are restored mechanically and rapidly cooled to a temperature of 10°C and 0°C. Later the blood of person is removed, and cryoprotectant mixture is replaced to stop ice formation. Now the body is cooled to-120°C.

In future if treatment is found to the particular disease the cryonic patient's body is re-warmed; treated by removing cryoprotectant mixture, and cured to get back to the living condition if required. There is a gradual increase in the preservation of tissues and cells by the use of CPA’s and temperature control devices. In 2018, a method for preserving brain with chemicals rather than freezing was developed a Y-combinator start-up called “Nectome” 4. 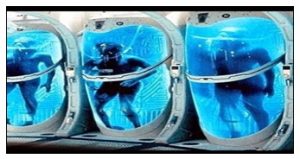 Cooling: After deceleration of death the cryogenic subject is kept in a bath of water for initial cooling from human body temperature of 37°C to 10°C. It involves convection effect. Cryonic subjects’ temperature is cooled by the process of convection, combination of conduction and fluid motion.5

Conceptual Basis: The persons who oppose the procedure of cryonics says that there is no fundamental barrier, when the structure of brain remains intact, which understand the physical law, and recover its information content.

Cryonics states that a person can live without activation of the brain, which is badly damaged 6. In current technology, by using the best methods, the cryopreservation of the complete body or brain of the cryonic subject gets damaged and irreversible. Cryonic advocates state that presently nonexistent nanotechnology will help to get back the life of a dead person in the future and treat the disease because of which the subject died 7. The process of mind uploading is also given 8.

The 1st cryonic body to be preserved by freezing was “Dr. James Bedford” in 1967 9. In 2015,” Du Hong” (61years) who is a female writer of children’s literature, is the first Chinese national to preserve her head 10. Till 2014, about 250 cryonic subjects are cryopreserved in U.S, and about 1,500 had arranged for preserving their bodies 6.

Procedures and Practice: Based on the different types of cells of mammalian species, there is wide changes in cryobiological response and cryo-survival during freezing and thawing cycle 11. The process of cryopreservation is by different methods:

Important Steps Involved in this process are:

It is rare in practice to decrease ischemia or reperfusion injury by pretreatment in cryonic subjects 11. Reduction in blood clotting can be obtained with the pretreatment of vitamin E in the cryonic subjects, but it may not cause any gastric bleeding as like aspirin 12. Sedation reduces cerebral metabolism, prevents blood clotting, increase blood pressure, stabilizes pH against acidosis, and protects against ischemia are maintained once after the occurrence of cardiac arrest. During the cryonic procedures to keep cells and tissues alive, blood circulation and respiration are restored. It is known as cardiopulmonary support (CPS) than cardiopulmonary resuscitation (CPR). To prevent resuscitation, Propofol (2,6-diisopropylphenol) is used for its sedative action, which can also act a neuroprotective 14. Neural cell apoptosis, which is due to ischemia, can be inhibited by the use of propofol Blood clotting is prevented by using Heparin. Streptokinase acts as a thrombolytic and THAM (tris-hydroxymethyl-aminomethane), which is a buffer that maintains arterial pH and crosses cell membrane by maintaining intracellular pH by decreasing CO2 production. Cryonics subjects are stored in thermos bottle-like containers of liquid nitrogen.

The Process of Cryonics mainly involves two Methods; they are:

Vitrification is the process of cooling and solidification without formation of crystals.

Method-1: Cryogenic Storage: By using anti-freezing compounds like CPA’s, the practice of cryonics decreases the formation of ice in cryonic subjects. In 2007, the formation of ice is eliminated by using vitrification solution in the brain, but not in other organs and tissues by major cryonic organizations.

Method-2: Vitrification: Vitrification is the process of solidifying to a glassy state, which is different from crystal form of ice of vitrous solid. The best examples include “Amber”. By slow cooling at 3million kelvins per second, pure water can be vitrified. Rapid cooling of sucrose during vitrification forms a “COTTON CANDY” whereas “ROCK CANDY” is formed on slow cooling.

Till the saturation point is obtained, brains are taken into the vitrification solution by cryogenic organizations.

A study is conducted on rabbit kidney, which was vitrified; cooled to a temperature of -135°C; again, re-warmed. This kidney is transplanted to a normal living rabbit. It shows very effective function as like the normal kidney and makes the rabbit to survive 15. “M22” is the vitrification mixture used to preserve rabbit kidney. M22 also helps in preserving the ultrastructure of brain in rabbits without formation of ice. To prevent ice formation rapid cooling is performed from 0°C to 130°C. Further cooling to the temperature of -196°C from -130°C leads to cracking and fracturing because of thermal stress and large solid vitrified samples. To avoid this process of cooling should be slow 13. 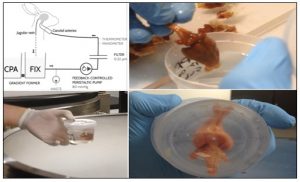 Integrating Nano-scale Technologies with Cryogenics: In freezing process, the changes in micro and nano scale should be known to overcome the limitations and also to improve cryopreservation. Traditional methods used for biopreservation are “slow and fast freezing”. The cells of mammals can be stored at a frozen rate of 1°C/min and the concentration of CPA’s should be as low as 1.5M. The CPA concentration needs to be sixfold higher to that of slow freezing and cooling is rapid up to the rates of -150°C/min to get successful vitrification. To load and unload CPAs into the cells “microfluidic channels” are used at high flow rate nanoliter droplets are continuously produced by using “ejector-based system”.

By using array of droplet ejectors, it is recently proved that the vitrification system is up-scaling during high efficiency with the nanoliter droplet vitrification method. By this method, a large no. of cells can be cryopreserved like RBC which can be used during pandemic situations like natural disasters and military conflicts. For clinical applications of cryopreservation, fully validated, closed, automated and affordable systems are needed. 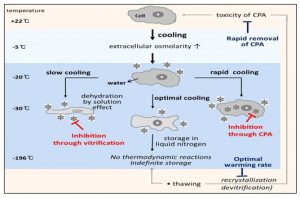 Future Goals in Cryopreservation using Nanotechnology: By using nanotechnology new origins in cryobiology can be explored. For the process of cryopreservation, the method like nano directional surfaces which can change droplets carrying biological cargo, and it is due to the advances in the fields of material science and nanotechnology. The potential or effective ways to change droplets is by freezing and changing cells by encapsulating nanoliter droplets over to the superhydrophobic nano rough surfaces, and the challenges to cryobiology is the minimal volume technologies that provide potential solutions. It is designed as the “architecture of lotus leaves and rose petals”.

Obstacles and Legal Issues for Cryopreservation:

CONCLUSION: At liquid nitrogen temperature (low temperature) the biological process becomes slow. Vitrification stops complete ice formation; CPA’s decrease the damage that is caused due to cryopreservation of tissues. The toxicity due to cryoprotectant is a reparable injury, and its less toxicity provides a chance for its development. By the principle of a reversible stable biological state, cryopreservation is applicable in humans and animals.

ACKNOWLEDGEMENT: The Authors are thankful to Santhiram College of Pharmacy for providing the necessary facilities for the work.

CONFLICTS OF INTEREST: The author(s) confirm that this article content has no Conflict of interest.