CRYSTAL MODIFICATION OF ATOVAQUONE IN PRESENCE OF POLYETHYLENE GLYCOL (PEG) 4000

CRYSTAL MODIFICATION OF ATOVAQUONE IN PRESENCE OF POLYETHYLENE GLYCOL (PEG) 4000

INTRODUCTION:Formulators are charged with the responsibility of formulating a product which is physically and chemically stable, and bioavailable. Solid-state properties including  polymorphism, solvate  and  salt  formation  can  have  a  profound  impact  on important  properties  (solubility  &  stability)  that  are  essential for  successful  development  of  drug  candidates 1.

Crystal engineering approaches, which can potentially be applied to wide range of crystalline materials, offer an alternative and potentially fruitful method for improving the solubility, dissolution rate and subsequent bioavailability of poorly soluble drug 2. One of the important objectives of pharmaceutical technology is to secure the stability and effectiveness of pharmaceutical products 3. Chemists and engineers in the pharmaceutical industry generally seek to deliver crystalline forms of their active compounds, mainly due to the inherent stability of crystalline materials and the well-established impact of crystallization process on purification and isolation of chemical substances.

Increasing attention is now being paid to the impact of materials properties in drug discovery and early development as the drug compounds tend to be very valuable materials. The pharmaceutical industry’s mission for the material is to rapidly advance development programs with good confidence that form and formulation problems are unlikely to arise and to maximize a compound’s potential as a therapeutic. In keeping with the common goal of making better products, faster and cheaper, we propose a paradigm of pro-active material design in pharmaceutical research.

Rather than settling for the physical forms that the pure compounds intrinsically display, we should be aiming to identify the physical / material properties required of the target drug and make crystalline forms to meet those needs 4.The preparation of solid drugs as pure single crystalline forms is a target of remarkable importance for meeting technological (Flowability, compactibility) and biopharmaceutical (solubility and bioavaibility) requirements 5.

The variations in the physical properties of a solid, such as crystal habit, solubility, hardness, color, optical properties, melting point or chemical reactivity play an essential part in the formulation of the solid and in the application of the formulated product 6.The role of crystallization processes in pharmaceutical science and technology can be associated, both, with its influence on the solid-state properties of the drug substances and with an effect on drug product  stability  and  performance. The concept of crystal and particle engineering applied to pharmaceutical substances requires, first of all, reproducibility and consistency of the solid-state properties 7.

The use of tailor-made additives to influence crystallization is relatively recent and less explored. Additives suitable for controlling crystal shapes do so by virtue of their structural relationships with the crystal surfaces in question and are of different types: low molecular-weight inorganic compounds, low molecular-weight organic compounds, or substances similar to crystallizing solute. In addition, polymeric materials and surface-active-agents, which are not similar in structure to the crystal surface, can also influence molecular aggregation during crystallization 8.

Nucleation has been reported to be significantly affected by the viscosity of the medium provided by the polymers, surface tension reduced by the surfactants, and supersaturation created by the replacing solvent 9. Spherical crystallization technique is also a rapidly growing concept in crystal habit modification. Wet‐ability, release, dissolution rate, the micromeritic and compression properties of many drugs have been improved by the spherical crystallization technique 10. Efforts were also made to grow the crystals in gelled organic solvent using polyethylene oxide as a gelling agent 11.Even the field of crystal modification and growth is expanding in fields such as artificial dental enamel by using amelogenin as a crystal growth and nucleation promoter 12. Crystallization in the presence of such additives has been carried out to modulate processability and bioavaibility (Table 1).

Procedure: The standard solution of Atovaquone was subsequently diluted with 0.1 N Hydrochloric acid to obtain a series of solutions containing 2, 4, 6, 8, 10, 12, 14, 16,18, 20 µg/ml. The absorbance of the solution was measured by usingUV spectrophotometer (SHIMADZU 1800 UV) at 252 nm using 0.1 N HCl as a blank. The absorbance so measured was plotted against the concentration.

TABLE 1: LIST OF DRUGS FOR WHICH CRYSTALLIZATION HAS BEEN CARRIED OUT IN THE PRESENCE OF POLYMERS AND /OR SURFACTANTS

Preparation of Atovaquone crystals in presence of PEG 4000:   Atovaquone (2 gm) was dissolved in 50 ml of Acetonitrile at 82oC with water bath containing PEG 4000 as additive with concentration of 1% W/V. The solution was then filtered through Whatmann filter paper and the filtrate was kept at room temperature for 24 hours to afford well defined crystals of Atovaquone. Then the crystals were spread on a petri plates and dried over calcium chloride in a vacuum desiccator for 2 days. Finally the crystals were stored in well closed container.

Scanning Electron Microscopy (SEM): Photomicrographs of Atovaquone and its crystals in presence of PEG 4000 were obtained from a JEOL 5400 (Japan) scanning electron microscope. Samples were mounted on a metal stub with an adhesive and coated with gold ions for 5-6 minutes under vacuum.

Differential Scanning Calorimetry (DSC): After calibration, thermograms were obtained by heating all the samples (5 mg) of pure drug and its crystal grown in presence of PEG 4000 at a constant heating rate of 10oC/min with chart speed of 40 ml/min under an atmosphere of nitrogen. The exact peak temperatures, melting point and heat of fusion were automatically calculated. The temperature range for the scan was 30oC to 300oC for all the samples. The instrument used was SIIO 6300 with auto-sampler (Japan).

Infra-red spectroscopy (IR): The crystals of Atovaquone grown in presence of PEG 4000 and pure drug itself were scanned and recorded in the range of 4000-400 cm-1 by using Infrared spectrophotometer, (Agilent Cary 630 ATR FTIR).

Powder X-ray diffraction (XRD): X-ray diffraction pattern of Atovaquone and its crystal forms in presence of PEG 4000 were obtained using the X-ray diffractometer (BRUKER D8 ADVANCE, Germany) at 40 kV, 30 mA and a scanning rate of 0.02o /min at the diffraction angle 2Ɵ over the range of 10- 80 using Cu (as anode) radiation of wavelength 1.5406 Å

Solubility measurement: The solubility of atovaquone and its crystals in presence of PEG 4000 was determined by adding excess solid (150 mg) to 100 ml media i.e. distilled water taken in a well stoppered iodine flask. The samples were stirred for 8 hours with the help of a magnetic stirrer with hot plate at 100 rpm at 37.5oC. After 8 hours of stirring, an aliquot (1 ml) of the samples were withdrawn with the help of graduated pipette, filtered through Whatmann filter paper and approximately diluted and absorbance was measured spectrophotometrically using UV visible spectrophotometer at 252 nm.

After specific time intervals, a 5 ml of aliquot was withdrawn and replaced with fresh and equal quantity of dissolution medium. The samples were suitably diluted with dissolution medium and absorbance of atovaquone was measured at 252 nm using U.V. spectrophotometer.

Compressional study: Pure drug and crystal in presence of PEG 400 were ground using mortar and pestle to achieve a similar particle size distribution for each batch. Compact were prepared directly from the ground crystals using 10 mm flat-faced punches on a hydraulic press.

The material for each tablet was weighed (250 mg), introduced into the die and compacted at various compression pressures, 1, 2, and 3 tons. The compaction surfaces were lubricated with 2% w/w magnesium stearate before compaction.

Crushing strengths were determined from the force required to fracture the compacts by diametral compression using tablet hardness tester (Pfizer type). The crushing strength of various crystal samples was noted.

Calibration Curve of Atovaquone: The linearity was observed in the concentration range of 2 to 20 µg/ml and thus it follows the Bear-Lambert’s law (figure 1). 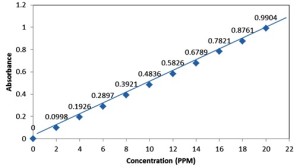 After crystallization of commercial sample from acetonitrile and in the presence of PEG 4000 showed difference in the crystal morphology and crystal forms (Fig. 3).

The changes in morphology of atovaquone crystals could be due to variations in face dimensions or the appearance or disappearance of some faces. Under certain conditions of crystallization, one set of crystal faces may be induced to grow faster than others, or the growth of another set of faces may be retarded. 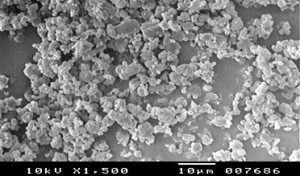 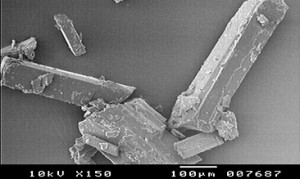 FIG. 3: SEM OF ATOVAQUONE CRYSTALS GROWN IN PRESENCE OF PEG 4000 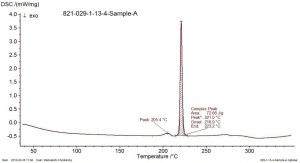 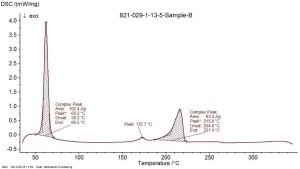 FIG. 5: DSC OF ATOVAQUONE CRYSTALS GROWN IN PRESENCE OF PEG 4000

Infrared spectroscopy (IR): Characteristic peaks of atovaquone appeared at 3366.67 cm‐1 (O‐H), 2925.70 cm‐1 (C=CH2), 1645.23 cm‐1 (C-C), 1366.12 cm‐1 (CH3) and 1088.32 cm‐1 (C-Cl) were observed (Fig. 6). IR spectra of commercial drug when compared with the crystals of atovaquone obtained in the presence of polymer shows slight or no change in their characteristic peaks (Fig. 7) and also there is no polymorphic modifications indicated by the IR spectroscopy. These results indicated that there is no chemical interaction between drug and additives when formed as crystals in presence of additives with the help of acetonitrile as a solvent.

FIG. 7: IR SPECTRA OF ATOVAQUONE CRYSTALS IN PRESENCE OF PEG 4000

Powder X-ray Diffraction (XRD):The X-ray diffraction pattern of crystal forms were studied by X-ray diffractometer. The X-ray diffraction pattern of pure drug (Fig. 8) has more number of peaks when compared to its crystal form (Fig. 9). The XRD spectra of untreated material and samples recrystallized from acetonitrile in presence of PEG 4000 exhibited essentially similar diffraction patterns (2Ɵ values), suggesting that particles crystallized in the presence of additive did not undergo structural modification (Table 2). However, the differences in the relative intensities of their peaks may be attributed to differences in the crystal size and habits of the sample, which may be attributed to the different solubility of the drug in the crystallization media. 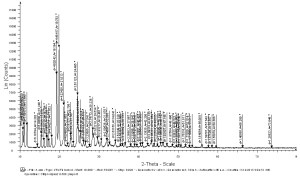 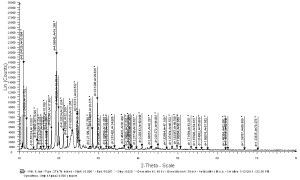 Solubility studies: The solubility study showed that the pure drug atovaquone (crystalline) was the least soluble (2.6830 µg/ml) and the crystals grown in presence of PEG 4000 as a hydrophilic polymer was (26.880 µg/ml) with 10.01-fold increase in solubility (Fig. 10). The increase in the solubility of crystals in the presence of additive could be due to melting of hydrophilic polymers which are associated with the crystals when compared to pure drug (Atovaquone). 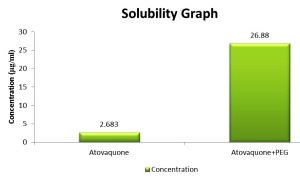 FIG. 10: SOLUBILITY CHART OF ATOVAQUONE AND ITS MODIFIED CRYSTALS 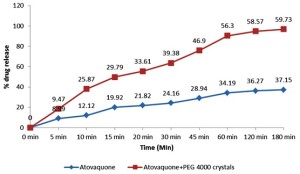 Compressional studies: Compression of untreated atovaquone crystals at all compaction pressures produced weak compacts with low crushing strength and high tendency to cap. The crystals grown in presence of PEG 4000 showed the improvement in the Compressional properties as the force required to break these compacts of crystals was much higher than required for the pure untreated drug atovaquone (Fig. 12) (Table 4).

It has been shown that the shape of a crystal is a complex characteristic, and its importance in relationship to powder properties is therefore difficult to assess. There are a limited number of studies in the pharmaceutical literature that have specifically discussed the relationship between particle shape and compact strength for a specific material. It has been previously shown that atovaquone crystals undergo fragmentation during compression.

It is reasonable that with an increased particle irregularity, the number of possible inter-particulate attraction zones in a compact, and consequently the compact strength, will increase, although the packing properties of the particles are similar. It is also possible that during the compression process, the particles can undergo an increased degree of deformation due to an increased particle irregularity, especially at the edges and corners of the crystals.

The consequence of the increased local particle deformation will be an increased bonding force of the attraction zones between compact particles. 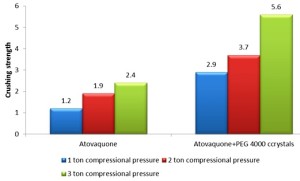 SUMMARY AND CONCLUSION: Crystal habit of atovaquone particles can be modified by the presence of low amounts of additives.

The IR results showed that there is no chemical interaction between drug and additives when formed as crystals in presence of PEG 4000 with the help of acetonitrile as a solvent. The SEM analysis showed that different crystal habits of atovaquone were obtained. The XRPD and DSC results showed that there is no polymorphic transition taken place but there was significant change in the crystal size and habit in presence of PEG 4000 was observed.

The highest solubility and the lowest solubility was obtained from sample recrystallized from acetonitrile in presence of PEG 4000 and untreated sample, respectively. Presence of additive like PEG 4000 showed significant improvement in the dissolution rate as compared to untreated atovaquone crystals.

The sample crystallized in presence of PEG 4000 showed the improvement in the compressibility as compared to untreated atovaquone crystals.