ABSTRACT: Heterocyclic schiff bases of 2-amino-4, 6-dimethyl benzothiazole with selected heterocyclic α- hydroxy aldehyde and α-hydroxy ketones and their Cu (II) metal complexes have been synthesised. The Cu (II) metal complexes of schiff bases are reported and characterised based on elemental analysis, IR, 1H NMR, ESR, XRD, Thermal analysis, magnetic moment, and molar conductance. The molar conductance data reveals that all metal chelates of schiff bases are non electrolytes. IR spectra show that ligand is coordinated to the metal ion in a bidentate manner. From the magnetic and electronic spectral data it is found that the geometrical structures of these complexes are square planar. The activity data show the metal complexes to be more potent antifungal and antibacterial than the parent schiff base ligands against one or more fungal and bacterial species.

INTRODUCTION: Schiff bases and their complexes have a variety of applications in biological, clinical, analytical and pharmacological areas. Studies of a new kind of chemotherapeutic Schiff bases are now attracting the attention of biochemists1.Earlier work reported that some drugs showed increased activity, when administered as metal complexes rather than as organic compounds. A large number of Schiff bases and their complexes have been studied for their interesting and important properties, e.g., their ability to reversibly bind oxygen, catalytic activity in hydrogenation of olefins and transfer of an amino group, photochromic properties, and complexing ability towards some toxic metals.

The high affinity for the chelation of the Schiff bases towards the transition metal ions is utilized in preparing their solid complexes and the complexes are used as antitumor and antibacterial agents 2, 3. A number of studies have reported the ligational aspects and biological role of Schiff bases and their metal complexes 4, 5. Schiff bases are the condensation products of amines with active carbonyl compounds. They contain azomethine (> C = N-) group and act as effective ligands. The Schiff bases are generally represented by R – CH = N – R1 and can be prepared by condensation of active carbonyl compound with primary amine.

All the melting points were determined in an open capillary tube and are uncorrected. Completion of the reaction was monitored by thin layer chromatography on precoated sheets of silica gel G. All the reagents used were chemically pure and are of AR grade. The ligand selected in the preparation

Synthesis of 2-amino-4, 6-Dimethyl Benzothiazole was carried out by the standard method.(0.1M) 2,4-Xylidine (2,4-dimethylaniline) and sodium thiocyanate (0.2M) in 100ml glacial acetic acid were mixed together and reaction mixture was cooled to 0oC temperature.

The solution was then treated with very dilute alkali like NaOH for the    separation of free amine. The free amine thus obtained was filtered, washed and dried and was recrystallized from ethanol M.P observed 140ºC, yield 80%. It was tested for free NH2 group.

Schiff bases were synthesized by using equimolar ethanolic solutions of heterocyclic amine and hydroxyaldehyde / ketone and refluxing mixture for 4-5 hours. Then the reaction was monitored by TLC method. Upon observing single spot the heating was stopped and reaction mixture was poured in ice cold water / on crushed ice   the separated solid was collected by filtration, after washing and drying, it was recrystallized from ethanol. The melting points were recorded. 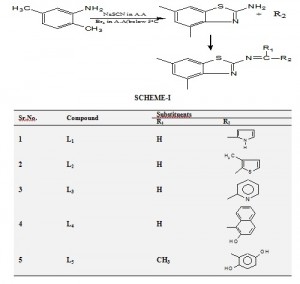 TABLE 1: ANALYTICAL DATA OF CU (II) COMPLEXES
Preparation of complexes: The ligand (0.02 moles) and the metal salt (0.01 moles) in 50 ml ethanol were mixed. The pH of the mixture solution was raised up to 5 using alcoholic ammonia .The solution was then concentrated on steam bath in a china bowl. Solid complex there after separate out washed with acetone to remove excess of ligand and dried over CaCl2 overnight.

In the IR spectra of all Cu(II) complexes, medium to strong intensity bands appeared in the region 1627- 1637 cm-18 which can be assigned to characteristic azomethine group i.e –(C=N) of

almost all metal complexes. It is strikingly observed for all the metal complexes compared with ligands that the band value for azomethine group has shown considerable shifting in downward or upward depending upon the intensity of coordination which indicates the involvement of azomethine nitrogen in the coordination with metal ions9.

The band value at ~1550 cm-1 shows no shift indicates non involvement of ring nitrogen in bonding. It is found that the band value absorbance in metal complexes is unchanged which strongly supports the non-involvement of thiazole nitrogen in coordination with metal ion. Further the band observed at ~3450cm-1 in ligand L4 and L5 is attributed due the presence of -OH. Either it is disappeared on complexation or showed variance in frequency in downward direction which indicated the deprotonation and involvement in the coordination with transition metal ions under investigation10.

The appearance of these new bands of M-N and M-O vibrations supports the involvement of N and O atoms in complexation with metal ions. The IR spectra of Cu (II) complexes show band of medium intensity at 3350-3500 cm-1 which can be assigned to –OH stretching due to presence of water of hydration, presence of water of hydration in these complexes is well supported and confirmed by the thermal data analysis and their respective spectral figures.

1H NMR spectra of synthesized metal complexeswere recorded in DMSO. The 1H NMR spectra of complexes show broad signals due to presence of metal ion and the conformation of each signal in the aromatic region is difficult due to complex pattern of splitting. 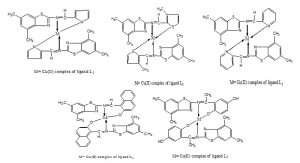 ESR Spectra: It is observed from ESR spectrum Cu (II) complexes that there is a single line resulting in the interaction of unpaired electron present in Cu (II) nucleus. The Table reveals that the ‘gav’ values less than 2.3 which suggest the existence of sufficient covalent nature of metal ligand bond13. Also the G values less than 4 indicate that the Cu (II) complexes are strong field ligands. [Cu (L1)2] complex shows isotropy as the values of g|| and g⊥ are same were as rest of the three complexes show anisotropy. The electronic spectral data suggest that all Cu (II) complexes of ligands under study have square-planar geometry.

This seeded preparation was then poured in sterile petri plate under aseptic condition and allowed it to solidify Cups of 10 mm diameter were borered in the agar plate with sterile cork borer. 100 μl of compound solution prepared in the cup under aspectic condition with the help of micropipette. 100μl of DMSO was also placed in one of the cup as blank (negative control). A standard antibiotic disk impregnated with 10 units of penicillin was also placed on the seeded nutrient agar surface as standard reference antibiotic (positive control).

The plates were kept in refrigerator for 15 minutes to allow diffusion of the compound from agar cup into the medium. Then the plates were shifted to incubator at 37 °C and incubated for 24 hours. After incubation plates were observed for the zone of inhibition of bacterial growth around the agar cup. Results were recorded by measuring the zone of inhibition in millimeter (mm) using zone reader. Antibacterial Activity of the synthesized metal complexes are given in table.

Antifungal activity was performed by poison plate method. The medium used was Potato Dextrose Agar (Himedia). The medium was prepared and sterilized at 10 Psi in autoclave for 15 minutes. Then the compound to be tested is added to the sterile medium in aspetic condition so as to get final concentration as 1%. Gresiofulvin was prepared as standard reference plate (positive control) Aspergilus niger, penicillium chrysogenum, Fusarium moneliforme, Aspergillus flavus were selected as test fungal cultures.

They ere allowed to grow on slant for 48 hours so as to get profuse sporulation. 5ml of 1:100 aqueous solution of Tween 80 was added to the slant and spores were scraped with the help of nicrome wire loop to form suspension.

Antifungal Activity of the metal complexes are given in table

ACKNOWLEDGEMENTS: The authors are thankful to Principal, Yeshwant Mahavidyalaya, Nanded for providing laboratory facilities and also to the Director, IICT, Hyderabad for providing the instrumentation facilities.