ABSTRACT: Even though numerous herbal preparations have been recommended in alternative systems of medicine against hepatic disorders, many of them cause severe toxicity upon prolonged use. Volvariella volvacea (Bull.: Fr.) Singer is a highly nutritious mushroom that can be incorporated into the regular diet without the fear of side effects. The protective effect of the aqueous ethanol extract of V. volvacea mycelia was evaluated against acetaminophen (APAP) induced hepatic damage in Wistar rats. A single dose of APAP (3 g/kg, p.o.) was used for inducing hepatic damage. The extract was administrated orally at doses of 250 and 500 mg/kg, once daily for 7 days. Treatment with APAP (3 g/kg) increased the activities of liver function enzymes serum glutamate oxaloacetate transaminase (SGOT), serum glutamate pyruvate transaminase (SGPT) and alkaline phosphatase (ALP). APAP also reduced the activities of superoxide dismutase (SOD), catalase (CAT), and glutathione peroxidase (GPx) and enhanced lipid peroxidation in liver tissue. Administration of V. volvacea extract (500 mg/kg, p.o.) decreased the activities of SGPT, SGOT, and ALP. It also enhanced the level of SOD, CAT as well as GPx and decreased the tissue MDA level. The results of the study revealed the protective effect of V. volvacea against APAP-induced hepatotoxicity. The activity is mediated through its antioxidant potential by scavenging the free radicals and also by maintaining the levels of hepatic antioxidant systems.

INTRODUCTION: Liver disease is a major concern throughout the world. Several drugs, chemicals, and other agents have been implicated in the etiology of liver diseases. Among these, the mechanism of paracetamol or acetaminophen (APAP) has been well established. APAP is a widely used analgesic and antipyretic drug that exert hepatotoxic effects in a dose-dependent manner 1, 2.

APAP is converted to a toxic reactive intermediate called N-acetyl-p-benzoquinone imine (NAPQI) by the action of cytochrome P450 system mainly located in the liver 3. The precise role of oxidative stress in APAP-induced liver injury is not completely understood. It has been shown that binding of NAPQI to glutathione sulfhydryl groups results in the reduction of hepatic anti-oxidative capacity 4.

Also, it has been postulated that NAPQI can lead to direct oxidative damage to many cell components 5, which eventually leads to oxidative stress and liver toxicity. Antioxidants play a significant role in protecting living organisms from the toxic effect of various chemicals by preventing free radical formation 3.

The free radical-mediated hepatotoxicity can be effectively managed by the administration of agents that possess antioxidant, free radical scavenging, and anti-lipid peroxidation activities 6. Search for completely effective and safe alternative drugs for the treatment of liver diseases is crucial because many of synthetic antioxidants currently in use for the purpose have been reported to have various side effects 7. Macro-fungi, especially mushrooms, have been traditionally used in China and Japan to treat a variety of diseases for many years. Mushroom mycelium and its extracts have been studied widely for their vast pharmacological importance 8, 9.

Animals: Female Wistar rats weighing 200 ± 20 g from Small Animal Breeding Centre, Kerala Agricultural University, Mannuthy, Thrissur, Kerala, India were used in the experiment. The animals were maintained under standardized environmental conditions (22-28 °C, 60-70% relative humidity, 12 h dark/light cycle) with free access to standard food (Sai Durga Feeds and Foods, Bangalore, India) and water ad libitum. The experiment was carried out according to the guidelines of the Committee for the Purpose of Control and Supervision of Experiments on Animals (CPCSEA), Govt. of India and by the approval of the Institutional Animal Ethics Committee (149/99/ CPCSEA dated 23-10-2009).

Production of the Mycelium and Preparation of Extract: Culture of V. volvacea (MTCC-957), obtained from the Microbial Type Culture Collection, Institute of Microbiology, Chandigarh, India, was grown in a medium comprising 10.0 g glucose, 3.0 g peptone 1.0 g dipotassium phosphate (K2HPO4), 0.25 g magnesium sulfate (MgSO4 7H2O), and yeast extract 1 g/L at 25 °C - 27 °C on an orbital shaker. After ten days of submerged growth, the cultures were filtered; the mycelium was separated and washed thoroughly with distilled water. Aqueous ethanol extract of cultured mycelium was prepared as described earlier 16.

Experimental Design: Hepatoprotective activity against the APAP-induced chronic toxicity was determined by the method of Ajith et al., 17, with some modifications. The animals were divided into five groups of six animals each. Group I animals treated with a single dose of APAP (3 g/kg body weight) were served as control. Group II animals treated with distilled water were considered as normal. Group III and IV animals were treated orally with 250 and 500 mg/kg body weight of aqueous ethanol extract of V. volvacea, respectively, and group V animals were treated with 100 mg/kg body weight of silymarin, a standard drug. The silymarin and V. volvacea extract were suspended in distilled water and were administrated orally once daily for seven days. After 24 h of the final dose of drug administration, a single dose of APAP (3 g/kg body weight) was given orally to all the groups except the group II. Animals were sacrificed exactly after 12 h of APAP administration. Blood was collected directly from the heart, and serum was separated. Livers were excised, washed thoroughly in ice-cold saline to remove the blood.

Biochemical Analysis: Activities of serum glutamic oxaloacetate transaminase (SGOT), serum glutamate pyruvate dehydrogenase (SGPT) and alkaline phosphatase (ALP) were estimated by a kinetic method using the kit of Agappe Diagnostic Ltd., India with the aid of an SL 164 - UV/VIS double beam spectrophotometer (Elico India Ltd, Hyderabad, India). The activities of transaminases were determined as the change in absorbance/min at 340 nm. Serum ALP activity was determined from the rate of release of para nitrophenol at 405 nm.

Determination of Antioxidant Status in the Liver: A 10% liver homogenate was prepared in phosphate buffer (0.05 M, pH 7) using a Polytron homogenizer. Homogenate was centrifuged, and the supernatant was used for the determination of superoxide dismutase (SOD), catalase (CAT) and glutathione peroxidase (GPx) activities and also for the measurement of glutathione (GSH) and lipid peroxidation levels.

Histopathological Examination: Tissue slices from the livers of treated animals were fixed immediately in 10% neutral formalin for 24 h, dehydrated in graded (50-100%) alcohol, and embedded in paraffin, cut into 4-5 µm thick sections and stained with hematoxylin-eosin. The sections were evaluated for the pathological symptoms of hepatotoxicity, such as necrosis, fatty infiltration, fibrosis, lymphocyte infiltration, etc.

TABLE 2: EFFECT OF VOLVARIELLA VOLVACEA MYCELIA EXTRACT ON THE ACTIVITIES OF HEPATIC ANTIOXIDANT ENZYMES IN RATS ADMINISTERED WITH APAP 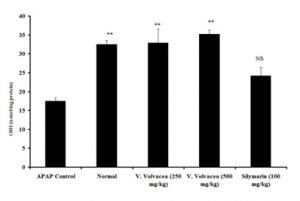 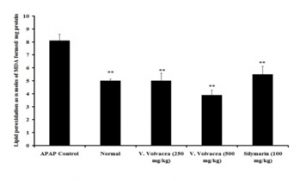 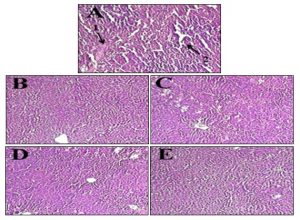 DISCUSSION: Liver injuries induced by APAP is a commonly used model for the screening of hepatoprotective drugs, and the extent of hepatic damage is assessed by the increased levels of cytoplasmic enzymes (SGPT and SGOT) in circulation 24. APAP is reported to increase the SGPT, SGOT, and ALP activities and exacerbate oxidative injury 17. The rise in activities of SGPT, SGOT, and ALP has been attributed to the damage of the structural integrity of the liver because these enzymes are cytoplasmic in location and are released into circulation after cellular damage 24. The results of this study revealed that the V. volvacea mycelia extract (250 and 500 mg/kg) have potent preventive activity against APAP-induced hepatotoxicity. The amelioration of liver toxicity by the extract is evident from its significant effect on the SGOT, SGPT, and ALP activities in Table 1. V. volvacea extract showed a dose-dependent effect in reducing the hepatotoxicity. The higher dose of the extract (500 mg/kg) exhibited more activity than the lower dose (250 mg/kg).

These findings are also confirmed by histopathological observations of liver tissue. The positive standard used in the current study, silymarin, is a well-established hepatoprotective drug 25.

The ability of silymarin in preventing drug-induced hepatotoxicity is associated with its ability to act as a radical scavenger, thereby protecting membrane permeability 25, 26. Tissues have evolved an antioxidant defense system, including enzymatic and non-enzymatic antioxidants to prevent the oxidative damage. This antioxidant system is significantly inactivated by lipid peroxides or free radicals generated during APAP-induced hepatic toxicity 17. The results of the present study indicated that SOD, CAT, and GPx activities were significantly decreased in the liver in response to APAP treatment than normal rats, implying increased oxidative damage to the liver. On the contrary, SOD, CAT, and GPx activities were significantly elevated by the administration of V. volvacea extract to APAP intoxicated rats, suggesting its ability to restore/maintain the activity of hepatic enzymes. APAP is a powerful inducer of cytochrome P-450 and produces a highly reactive quinone-imine, which combines with sulphydryl groups of proteins and cause rapid depletion to intracellular GSH 27, and this depletion of GSH is a critical determinant of cell survival and death in oxidative stress conditions 28. Therefore, maintaining the GSH level is very critical to overcoming the toxic effect of APAP. In the present study, the hepatic content of GSH was significantly decreased in APAP intoxicated rats compared with the normal group of rats. However, treatment with V. volvacea extract significantly elevated the GSH level suggesting that V. volvacea could protect the APAP-induced depletion of hepatic GSH.

The exact mechanism by which the extract exhibits hepatoprotective activity is not clear. But there are many reports showing that lipid peroxidation by free radical derivatives of APAP is one of the principal mechanisms of APAP-induced liver damage leading to disturbance of cell membrane integrity 29, 30. In the present study, APAP-induced toxicity causes an increase in the levels of lipid peroxidation in liver tissue. However, V. volvacea extract administration caused a significant reduction in lipid peroxidation levels as compared to the APAP-induced group. Earlier studies conducted in our laboratory have also revealed the potent antioxidant potential of V. volvacea 16. This free radical scavenging and antioxidant power of the V. volvacea mycelia extract in terms of prevention of lipid peroxidation and boosting of antioxidant defense mechanisms could be the possible reason behind its exhibited hepato-protective effect.  V. volvacea is well known for its high content of proteins, amino acids, vitamins, and minerals. Our previous study disclosed the presence of carbohydrates, polyphenols, proteins, and saponins in V. volvacea mycelium extract 16. The effect observed in the present study might be due to the cumulative effects of these constituents. However, further detailed studies are needed to elucidate the function of its individual components.

CONCLUSION: In summary, the hepatotoxicity induced by APAP increased the levels of SGPT, SGOT, and ALP and decreased the hepatic antioxidant status in rats. However, the aqueous ethanol extract of V. volvacea mycelia significantly protected the animals from APAP-induced acute hepatotoxicity by restoring the antioxidant status and also by reducing the levels of SGPT, SGOT, and ALP. The protective effect is mediated by the significant antioxidant activity of the extract, and further studies are needed to confirm the clinical applications of the extract in humans.

ACKNOWLEDGEMENT: The authors gratefully acknowledge Dr. K. A. Rony and Dr. T. A. Ajith for their valuable suggestions and kind help during the study.

CONFLICTS OF INTEREST: The authors declare that there are no conflicts of interest in publishing the manuscript. All the authors are associated and contributed to the work, and there are no competing financial interests.