ABSTRACT: Background: In chronic alcoholics, continuous heavy drinking leads to progression of alcoholic liver disease (ALD) from alcoholic fatty liver, hepatitis to cirrhosis. Strict abstinence from alcohol has its own limitations and there is paucity of promising drugs available to treat ALD. Malotilate showed promising hepatocyte regenerating capacity and ability to prevent such damage. Aims:  The objective of this study was to evaluate curative effect of malotilate on ALD in rats. Methods:  The study was done using Sprague Dawley rats. 5 groups were treated as: 1. Control: ethanol 40% v/v (orally 1ml / 100 g / d), 2. Vehicle control: Methyl Cellulose and 3, 4, 5: malotilate, three doses 25 (Low), 50 (Moderate), 100 (High) mg /kg / d orally, respectively. In all groups: ethanol was given initially for 21 days. Then vehicle or malotilate was administered for next 21 days. The liver damage was assessed bio-chemically on day-1, day-22, day-43 by measuring serum AST, ALT, ALP, GGT, total bilirubin, direct bilirubin, total protein, albumin and prothrombin time. The histo-pathological assessment of liver damage was done on day-43. Results: This study demonstrated that malotilate favorably altered all the biochemical parameters and the histopathology scores of liver damage in malotilate treated groups. Conclusions: malotilate showed hepatic structure regenerative and hepatic function restorative effect in ALD. This study indicated that malotilate may be useful in treating established ALD in alcoholics.

INTRODUCTION: Alcohol is the commonest substance of abuse. Alcoholism is one of the most dreadful self-made diseases of mankind. Alcohol induced Liver Disease (ALD) is the important cause of disability and death amongst the abusers throughout the world. Total abstinence from alcohol is the primary step for reversal and to stop progression of ALD. Mortality of continuous heavy drinkers is much higher than mortality of abstainers.

But usually strict abstinence is very difficult for a binge drinker because of ravages of alcohol. ALD starts with fatty liver formation and progresses into hepatitis, fibrosis, necrosis and cirrhosis. Further, the risk of hepatocellular cancer highly increases in patients with cirrhosis, especially in alcoholics. Ultimately complications of cirrhosis lead to death1. The current remedies available to manage ALD are very few with limited proof, questionable efficacy and compromised adverse effects. Therefore, still there is a need to invent newer treatment strategies for prevention and cure of alcohol induced liver damage.

The rats were divided into 5 groups (n=6) as follows, to study the hepato-restorative / regenerative effect of malotilate on ALD:

First ethanol 40% v/v was administered orally in the dose of 1ml/100gm/day 4 to all the groups every day for 21 days to induce liver damage in all animals. Then from day-22 onwards till day-42 methyl cellulose or malotilate was administered as per the groups respectively, to evaluate curative effect of malotilate on hepatic damage. In anaesthetized animals, the blood samples were withdrawn and assessed for the biochemical parameters on day-1 and day-22. On day-43, the blood was withdrawn after anesthesia and then the animals were sacrificed by cervical dislocation to isolate liver for histopathological evaluation.

At the end of study the livers were dissected and fixed in 10% formalin solution for 24 h. The fixed tissues were embedded in paraffin, sectioned to 3-5 μm thickness, deparaffinized, and rehydrated using standard techniques. The extent of alcohol-induced necrosis and steatosis was evaluated by assessing morphological changes in liver sections stained with hematoxylin & eosin and Masson’s trichrome using standard techniques 5. Liver sections were graded numerically to assess the degree of histological changes in hepatic injury.

All the data were expressed as Mean ± SD. The Statistical analysis of results was done by applying Wilcoxon Signed Ranked test and Kruskal Wallis with post-hoc Dunn’s test using the Graph Pad Prism -5 software.

RESULTS: In this study the AST, ALT, ALP and GGT levels measured on day-22 were significantly (p< 0.001, p<0.05) raised in all groups because of ethanol exposure for 21 days. Further, these levels of AST, ALT, ALP and GGT in ethanol (E), and methyl cellulose (MC) groups were significantly higher on day-43 than their day-22 values (Tables 1, 2). The treatment with only vehicle; methyl cellulose (Group-2) showed no significant difference in the enzyme levels than those in the ethanol pretreated group-1. Furthermore, in all malotilate treated groups, (group-3-low, group-4-moderate and group-5-high dose) the elevated hepatic marker enzyme levels were significantly reduced to normal baseline levels on day-43 (Tables 1, 2). The trend of AST levels and effects of various treatments over study period was seen in Graph 1. Similar trend was observed with other biochemical markers which were elevated by ethanol. 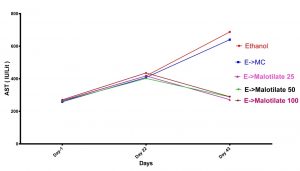 On day- 43 the total histopathological scores of group-1; ethanol (E) and group-2; methyl cellulose (MC) were significantly high indicating severe hepatic damage. Whereas, treatment with malotilate (low, moderate and high doses) significantly (p<0.001) reduced the toxic effects of ethanol and restored the hepatic architecture to normalcy when compared with group-1 and group-2 (Table 6).

But, raised GGT levels are highly suggestive of alcoholic liver disease. GGT levels tend to be high if there is recent alcohol consumption even in absence of liver disease because this enzyme is induced by alcohol 7. Prothrombin time (PT) is dependent on availability of coagulation factors which are synthesized in liver. In case of liver damage deficiency of coagulation factors leads to prolongation of PT 7. It is the warning sign of liver cirrhosis and progression of the disease to mortality. According to Douglas M Heuman 8, ethanol produces these toxic effects when it gets metabolized into acetaldehyde by CYP2E1 enzymatic pathway. There is increase in oxidative stress that triggers the inflammatory response in hepatocytes via release of inflammatory mediators and cytokines.

Further 21 days treatment with malotilate effectively restored the altered AST and ALT levels to normalcy at day-43 which were comparable to their baseline values indicating reversal of liver damage. This curative effect was observed at all doses of malotilate.

Hyperbilirubinaemia is a very sensitive test to substantiate the functional integrity of the liver and severity of necrosis.  It indicates the binding, conjugating and excretory capacity of hepatocytes that is proportional to the erythrocyte degradation rate 4.

Whereas, significant increase in total bilirubin shows hepatocyte damage induced by ethanol. These findings are also supported by significantly high histopathological scores of liver damage in ethanol treated groups. Treatment with malotilate (25, 50 & 100 mg/kg) significantly diminished the altered total bilirubin and direct bilirubin levels to normalcy by day-43 as the levels reached the baseline.

In the present study, significant decrease in serum total protein and albumin levels along with significant increase in prothrombin time on day-22 in all groups after administration of ethanol for 21 days indicated ethanol induced impairment of protein synthesizing function of liver. Estimation of serum total protein levels is helpful in differentiating between a normal and damaged liver function as they are produced in the liver; albumin being the main protein in blood 11. The parameter prothrombin time is used to differentiate between a normal and damaged liver as it evaluates the functioning of blood clotting factors that are proteins made by the liver 11. The ethanol provoked hepatotoxicity, leading to the disruption and dis-association of polyribosomes from endoplasmic reticulum(ER) results in decreased clotting factor synthesis. In the present study ethanol treated rats displayed a significant increase in the prothrombin time (PT) which clearly indicates the disability of the liver to synthesize the clotting factors.

Thus the synthesizing capacity of liver was hampered by ethanol. Treatment with malotilate for further 21 days effectively reversed this effect and by day-42 the total protein and albumin levels were so significantly increased that they were comparable to their baseline values whereas, no such improvement was seen in group-2 of methyl cellulose treatment. These observations confirm the restorative effect of malotilate on ethanol induced hepatic damage. Imaizumi and Kato (1981) 12 and Niwano and Katoh (1985) 13 reported restorative effect of malotilate on the liver as increase in liver weight and liver protein attributed to increase in RNA and DNA contents in the liver. Similar findings have been reported by Igarashi, Hatahara and Funaki (1983) that malotilate offers hepatotrophic action by increase in protein synthesis in hepatectomised rats 14. These results suggest that malotilate accelerates cell proliferation, resulting in facilitation of liver regeneration in rats.

Histopathological analysis of hepatic tissues of rats exposed to ethanol for 21 days displayed significantly high scores of liver damage. Since there was no significant difference in the histopathology scores (HPS) of group-1 ethanol treated and group-2 methyl cellulose treated groups, it is clear that the vehicle has no hepatoprotective activity. Whereas, in all treatment groups of malotilate the histopathology scores were significantly low than ethanol (E) and methyl cellulose (vehicle; MC) treated groups. These results confirm the postulation that malotilate has restorative potential in ethanol induced liver damage. The cytoprotective effect of malotilate has been demonstrated in in vitro experiments in which the drug was found to prevent the membrane alterations of isolated hepatocytes, detected by light and electron microscopy.  Malotilate prevented the reduction in DNA synthesis and the retardation of cell cycle in ethanol-induced damaged hepatocytes 15. Malotilate accelerates the recovery of impaired protein metabolism in alcoholic liver disease.  Matsuda and Takada (1988) reported that retention of transferrin, one of the secretory proteins from the liver, in the ballooned hepatocytes was inhibited by malotilate resulting into smaller number of ballooned hepatocytes and necrotic hepatocytes 15, 16.

This action of malotilate is mediated through significant lowering of transferrin contents in the Golgi fraction of the hepatocytes, significant lowering of hepatic acetaldehyde levels and limiting the process of fibrosis by reducing the availability of collagen and hydroxyproline, thereby limiting mRNA expression of marker proteins for hepatic fibrosis in livers17. Ryle described that malotilate offers hepatoprotective effect by mechanisms such as; stimulation RNA and protein synthesis, increase in cholesterol synthesis and thereby hepatocyte membrane stabilizing effect in damaged liver, anti-oxidant activity by increase in glutathione-S-transferase related free radical scavenging activity and anti-fibrotic property by inhibition of fibroblast proliferation and migration18. Such protective effect of malotilate, mediated through anti-oxidant activity, has been reported in our previous study 19.

CONCLUSIONS: Ethanol administration leads to hepatic damage and dysfunction accompanied by increase in AST, ALT, ALP and GGT, increase in total bilirubin and direct bilirubin, decrease in serum total protein and albumin and increase in prothrombin time.   After administration of malotilate the levels of AST, ALT , ALP,  GGT, total bilirubin and direct bilirubin were reduced, levels of serum total protein, albumin were increased and prothrombin time was reduced and normalized to day-1. These results of malotilate were supported by favorable changes in histopathological parameters in ethanol induced liver damage. Thus, malotilate was able to reverse the changes in various biochemical as well as histopathological parameters induced by ethanol indicating hepatic structure regenerative and hepatic function restorative effect in ALD. This study indicated that malotilate may be useful in treating established ALD in alcoholics. Further, evaluation of beneficial effects of malotilate in different animal species and in clinical trials is needed.

ACKNOWLEDGEMENTS: The authors are thankful to all teaching and non-teaching staff of departments of Pharmacology, Pathology and Biochemistry for their guidance, help and support to conduct this study.