ABSTRACT:The purpose for this review on pulsatile drug delivery systems (PDDS) is to compile the recent literatures with special focus on the different types and approaches involved in the development of the formulation. Pulsatile drug delivery system is the most interesting time and site-specific system. This system is designed for chronopharmacotherapy. Thus, to mimic the function of living systems and in view of emerging chronotherapeutic approaches, pulsatile delivery, which is meant to release a drug following programmed lag phase, has increasing interest in the recent years. Diseases wherein PDDS are promising include asthma, peptic ulcer, cardiovascular diseases, arthritis, and attention deficit syndrome in children, cancer, diabetes, and hypercholesterolemia. Pulsatile drug delivery system divided into 2 types’ preplanned systems and stimulus induced system, preplanned systems based on osmosis, rupturable layers, and erodible barrier coatings. Stimuli induced system based on electrical, temperature and chemically induced systems.This review also summarizes some current PDDS already available in the market. These systems are useful to several problems encountered during the development of a pharmaceutical dosage form.

INTRODUCTION: Controlled drug delivery systems have acquired a centre stage in the arena of pharmaceutical R&D business. Such systems offer temporal and/or spatial control over the release of drug and grant a new lease on life to a drug molecule in terms of patentability. The controlled drug delivery system offers many advantages, such as nearly constant drug level at the site of action, prevention of peak-valley fluctuations, reduction in dose of drug, reduced dosage frequency, avoidance of side effects, and improved patient compliance 1. 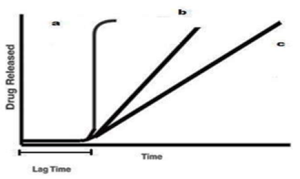 Pulsatile systems are designed in a manner that the drug is available at the site of action at the right time in the right amount. These systems are beneficial for drugs having high first-pass effect; drugs administered for diseases that follow chronopharmacological behaviour; drugs having specific absorption site in GIT, targeting to colon; and cases where night time dosing is required 2.

The focus of the present review is primarily on the pulsatile drug delivery methodologies and the upcoming technologies, which are being exploited on a new technique development 2.

Diseases targeted for Pulsatile Drug Delivery System: Diseases presently targeted for chronopharmaceutical formulations are those for which there are enough scientific backgrounds to justify PDDS- compared to the conventional drug administration approach 3. They include: hypercholesterolemia, asthma, cancer, duodenal ulcer, arthritis, diabetes, neurological disorders, cardiovascular diseases (e.g., hypertension and acute myocardial infarction) and colonic delivery. The rationale for chronotherapy/pulsatile release for each of these diseases will be briefly reviewed below 6.

This time is difficult to predict in advance, although a time lag of five hours is usually considered sufficient, given that small intestinal transit time is reported to be relatively constant at three to four hours 23.

All of these conditions demand a time-programmed therapeutic scheme releasing the correct amount of dose of the drug at the appropriate time. This requirement is usually fulfilled by PDDS 24. 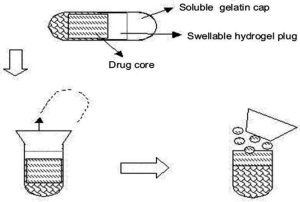 The plug material consists of insoluble but permeable and swellable polymers (e.g. polymethacrylates), erodible compressed polymers (e.g. hydroxypropylmethyl cellulose, polyvinyl alcohol, polyethylene oxide), congealed melted polymers (e.g. saturated polyglycolated glycerides, glyceryl monooleate), and enzymatically controlled erodible polymer (e.g., pectin). These formulations were well tolerated in animals and healthy volunteers, and there were no reports of gastro-intestinal irritation. However, there was a potential problem of variable gastric residence time, which was overcome by enteric coating the system to allow its dissolution only in the higher pH region of small intestine 27, 29. 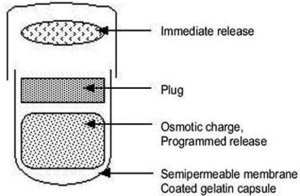 The orifice is small enough so that when the elastic wall relaxes, the flow of the drug through the orifice essentially stops, but when the elastic wall is distended beyond threshold value, the orifice expands sufficiently to allow drug release at a required rate. Elastomers, such as styrene-butadiene copolymer have been suggested. Pulsatile release was achieved after lag times of 1 to 10 hours, depending on the thickness of the barrier layer and that of semi permeable membrane, and a capsule designed for implantation can deliver drug intermittently at intervals of 6 hours for 2 days 35.

However, in general, the large-scale manufacturing of these systems is complicated and calls for special equipments and several manufacturing steps 40.

This coat erodes or emulsifies in the aqueous environment in a time proportional to the thickness of the film, and the core is then available for dispersion. In a study with human volunteers, it was shown that the lag time was independent of gastric residence time, and the hydrophobic film redispersion did not appear to be influenced by the presence of intestinal enzymes or mechanical action of stomach or gastro-intestinal pH. The lag time increased with increasing coating thickness. Such systems are better suited for water-soluble drugs. The major advantage of this system is its ease of manufacturing without any need of special equipment.

However, such lipid-based systems may have high in-vivo variability (e.g., food effects). The possible problems of erosion-controlled systems include a premature drug release when the penetrating water dissolves the drug, which diffuses out through the barrier layers, and sustained release after the lag phase when the barrier layer is not eroded or dissolved completely, thereby retarding the drug release 30, 31.

The Chronotropic® system consists of a drug-containing core coated by hydrophilic swellable hydroxypropylmethyl cellulose (HPMC), which is responsible for a lag phase in the onset of release. In addition, through the application of an outer gastric-resistant enteric film, the variability in gastric emptying time can be overcome, and a colon-specific release can be obtained, relying on the relative reproducibility of small intestinal transit time. The lag time is controlled by the thickness and the viscosity grades of HPMC.

The cores containing Antipyrine as the model drug were prepared by tabletting and retarding, and enteric coats were applied in a fluidized bed coater. The in-vitro release curves displayed a lag phase preceding drug release, and the in-vivo pharmacokinetic data showed a lag time prior to presence of detectable amounts of drug in saliva. Both in-vitro and in-vivo lag times correlate well with the applied amount of the hydrophilic retarding polymer. The system is suitable for both tablets and capsules 34. 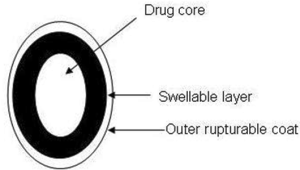 In pH sensitive system there are two components one is of immediate release type and other one is pulsed release which releases the drug in response to change in pH. In case of pH dependent system advantage has been taken of the fact that there exists different pH environment at different parts of the gastrointestinal tract. By selecting the pH dependent polymers drug release at specific location can be obtained. Examples of pH dependent polymers include cellulose acetate phthalate, polyacrylates, and sodium carboxymethyl cellulose. These polymers are used as enteric coating materials so as to provide release of drug in the small intestine.

Yang et al., developed pH-dependent delivery system of nitrendipine in which they have mixed three kinds of pH dependent microspheres made up of acrylic resins Eudragit E-100, Hydroxypropyl- methylcellulose phthalate and Hydroxypropyl- methylcellulose acetate succinate as pH dependent polymers. In one of the study carried out by Mastiholimath et al., attempt was made to deliver theophylline into colon by taking the advantage of the fact that colon has a lower pH value (6.8) than that of the small intestine (7.0-7.8). So, by using the mixture of the polymers, i.e. Eudragit L and Eudragit S in proper proportion, pH dependent release in the colon was obtained.

Future Trends in Pulsatile Drug Delivery System: The development of drug products by pulsatile technology is very challenging since it requires the correct dose to reach the right site at the appropriate time. However, the novel PDDS pays more attention on site and time-specificity. It is believed that in the near future novel PDDS will be explored in the treatment or management of some other chronic and terminal disease conditions like diabetes where dose is required at different time intervals. Among these systems, multi-particulate systems (e.g. pellets) offer various advantages over single unit which include no risk of dose dumping, flexibility of blending units with different release patterns, as well as short and reproducible gastric residence time. Some latest pulsatile technologies are shown in table 1.

CONCLUSION: Universally sustained and controlled release products provide a desired therapeutic effect, but fall for diseases following biological rhythms. It can be concluded that pulsatile drug delivery systems offer a solution for delivery of drugs exhibiting chronopharmacological behaviour, extensive first-pass metabolism, necessity of night-time dosing, or absorption window in GIT. The time controlling system character of these systems is useful for treatment of patients, due to their resulting efficiency and lack of undesirable adverse effects to the whole body. Delivering drug at the right time, right place, and in right amounts, holds good promises of benefit to the patients.