ABSTRACT: Oxidative stress is one of the factor that initiating development of cataract and describes the events leading to lens opacification, generally cataract is a clouding of the lens of the eye that will affect the vision either partially or completely. Proteins that are present in the lens begin to break down and the lens becomes cloudy. This will be avoided by taking external food supplements that are rich in antioxidants. Morinda citrifolia fruit (Noni) juice is rich in antioxidants. This food supplement with lot of nutraceuticals support good health and diminish the effects of aging.  To investigate the involvement of Noni in protection against oxidative stress, chick lens epithelial cells were subjected with hydrogen peroxide (100 µM H2O2) over a time course, with and without pre-treatment of Noni fruit extract and commercial Noni. Na+K+ATPase enzyme estimation was performed to determine the role of Noni juice and Noni extract. Our study revealed that Noni juice and extract preserved physiological functions of chick and human lens epithelial cells when subjected to oxidative stress.

It was found that people at high risk of developing advanced stages of cataract formation, lowered their risk by 25 percent when treated with a high-dose combination of Vitamin C, Vitamin E, beta-carotene and zinc. In the group, which includes people with intermediate cataract formation in one eye but not the other eye, the nutrients reduced the risk of vision loss by about 19 percent 7 - 15.

Morinda citrifolia: Morinda citrifolia Linn. is commonly known as Indian mulberry or Noni, has been used in tropical regions as food and folk medicine. The recent use of Noni as a dietary supplement is reported to have a broad range of therapeutic effects, including anti-bacterial, anti-viral, antifungal, antitumor, antihelminthic, analgesic, hypotensive, anti-inflammatory and immune enhancing effects. Noni is rich with Vitamin A, beta carotenoids, Vitamin E, Vitamin C, Vitamin B complex, with all trace minerals like Ca, Mg, K, Zn, Molybdenum and many more flavonoids. These ingredients present in Noni have made it the most powerful antioxidant 16 - 20. The high antioxidant property of Noni helps to prevent the formation of cataract 21 - 22. Our recent reports suggest that Noni fruit juice and extract have anti-apoptotic activity in oxidative stress induced lens epithelial cells. The present paper depict the cyto-protective activity of Noni.

Lens Organ Culture: The lenses were isolated from chickens brought from slaughter houses. The eyes were removed and the lenses were carefully dissected by a posterior approach. Lens Epithelial Cells (LECs) were separated from each of the dissected lenses by incubating in 1X Trypsin-EDTA solution for 1-2 minutes at 37 °C. 0.5×106 cells were cultured in a 6-well culture plate containing 1.5 mL minimal essential medium (MEM199, M-3769; Sigma) containing 10 % FBS for 6 days. Transparent lenses were selected for experimentation. All chick lens experiments (n=6) were performed in the MEM 199 containing 26 mM NaHCO3 as buffer. The MEM 199 was prepared with ion-exchange double-distilled water, sterilized by filtration through 0.22-μm filter with a pH adjusted to 7.4.

Oxidative Stress Induction in the Lens Epithelial Cells: 100 μM H2O2 (Sigma) concentrations were used in this investigation. Commercially available Noni and Noni fruit extract (Hexane) were made to final volume of 100 µL and diluted to appropriate concentration and added to the culture medium as required. The cells were washed twice in PBS and the growth medium was replaced and further incubated for 0 h, 3 h, 6 h and 12 h.

1 mL of Tris HCl buffer and 0.2 mL of each of magnesium sulphate, sodium chloride, potassium chloride, EDTA, ATP, were added to test tube containing 0.2 mL of homogenate. The mixture was incubated at 36 °C for 15 mins. The reaction was arrested by addition of 1 mL of 10 % TCA, mixed well and centrifuged. The phosphorus content of the supernatant was estimated. Fig. 2, 3. Represents estimation of NaKATPase pump activity (inorganic phosphate group) in wild-and broilertype chick lens epithelial cells.

Phosphorus Content of the Supernatant was Estimated by Modified Metol Method: After incubation the absorbance of standard (S) and test (T) were measured against blank (B) with Ultraviolet - Visible spectrophotometer at 680 nm. The % weight of inorganic phosphate (Pi) was calculated using the following formula; 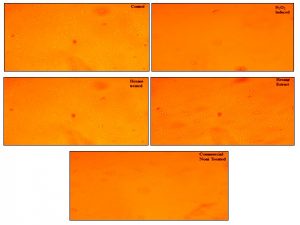 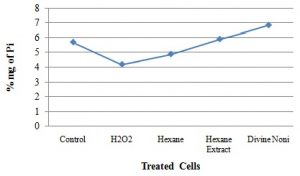 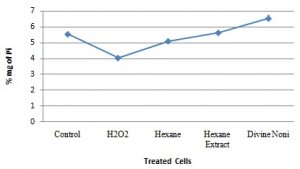 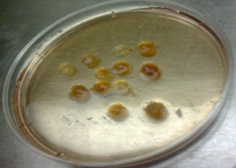 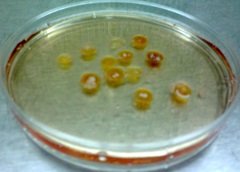 FIG. 4: HUMAN LENS CAPSULES OBTAINED FROM CATARACT PATIENTS. BOTH THE PICTURES SHOW THE SAMPLE SIZE FOR CELL CULTURE AND ANALYSIS 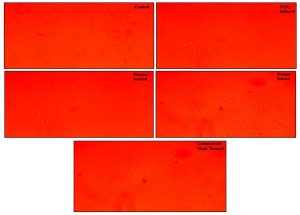 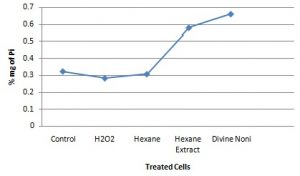 CONCLUSION: The present study reports that commercial Noni juice and Noni fruit extract would protect chicken lens as well as human Cataractous lens epithelial cells, which was shown in in-vitro oxidative stress model. Divine Noni contains excellent nutraceuticals which are having scavenging activity as well as protecting activity of lens proteins. The viability of human cataractous lens epithelium has been maintained due to the cyto-protective effects of Noni juice and extract and hence may be beneficial in the treatment of cataract.