ABSTRACT: Justicia wynaadensis, an endemic medicinal plant found in the regions of Western Ghats is a herb, belonging to the family Acanthaceae. The following study was carried out to evaluate the in vitro cytotoxicity of the leaf extract of Justicia wynaadensis. Four different extracts were prepared by using water and methanol [aqueous fresh leaves extract, methanolic extract of dry leaves powder, hot (boiled) and cold (macerated) aqueous extracts of dry leaves powder]. Preliminary screening of extracts showed the presence of flavonoids, phenols and terpenoids and its quantitative estimation was done using HPLC. Antioxidant activity was evaluated by DPPH and ABTS assay. The cytotoxic effect of all the four extracts were tested by MTT assay on two cancer cell lines MCF7 (Breast cancer cell line) and HCT116 (Colorectal cancer cell line). The cold aqueous extract had the highest cytotoxic effect on both the cell lines at IC50 values of 20.76 µg/ml and 28.46 µg/ml respectively.

INTRODUCTION: Justicia wynaadensis an endemic plant found in the regions of Western Ghats of South India is a herb, belonging to the family Acanthaceae. This plant is known to have medicinal properties and consumed by local population of Kodagu district during monsoon season 1. Studies on plant extract of J. wynaadensis have shown that it lowers cellular cholesterol and cholesteryl ester concentration, further studies also showed a novel inhibitory effect on the uptake of ox-LDL by human macrophage cell line 2.  Enumerated 3 that it is used as an ethno medicine by Kurichiar tribes inhabiting the Tirunelli forest of Wayanad district in Kerala. Anti-inflammatory activity of this plant was reported 4.

Polyphenols and flavonoids were identified and estimated in the plant 1. 24 phytocompounds were identified from the methanolic extract 5.The present study was carried out to evaluate the in vitro cytotoxic activity of leaf extract of Justicia wynaadensis.

Plant Collection, identification and authentication: Plants were collected from Kodagu district of Karnataka, during the monsoon season and the authentication was done by the taxonomist from Botany Department of Bangalore University, and it was identified as Justicia wynaadensis (Nees) T. Anderson.

Preparation of the extracts: Fresh leaves and dried leaves powder were used for extraction. The leaves were shade dried and then were ground into fine powder using grinder. Powdered leaves were stored in an air-tight container for further work. Four different extracts were prepared, by using water and methanol.

Fresh leaves aqueous extract was prepared by boiling fresh leaves in distilled water. Methanolic extract of dried leaves powder was obtained by Soxhlet extraction method and the solvent was concentrated using a rotary evaporator. Aqueous extract of dried leaves powder (hot extract-decoction method) was prepared by boiling dried powder in distilled water. It was boiled till the volume of water is brought down to one-fourth of its original volume. Aqueous extract of dried leaves powder (cold extract), was prepared by macerating dried powder in distilled water. The extract was subjected to constant shaking in a rotary shaker for 24 hr, and then filtered. All the extracts were stored at 4 0C for further study.

Estimation of Total Phenols and Flavonoids: Total phenol and flavonoid content in the extracts were estimated using HPLC (Waters- 510 Isocratic Model). C18 column (4.6 mm Dia and 250mm length) with a flow rate 1ml/min and pressure 1200 PSI was used for the estimation. The phenols and flavonoids were fractionated using the mobile phase acetonitrile and water in the ratio of 70:30. The absorbance was measured at 254nm and 272nm respectively. Gallic acid was used as standard for phenol estimation and Rutin was used as standard for flavonoid estimation. Qualitative identification was done by Rt and quantitative estimation by area 7.

DPPH Assay: Standard Ascorbic acid (1mg/ml) was prepared. 3ml of 0.1mM DPPH (2, 2-diphenyl -1- picrylhydrazyl) in methanol was added to all the concentrations of both standard and plant extracts. The solutions were incubated in dark for 15 minutes and absorbance was read at 517 nm using spectrophotometer. The tests were performed in triplicate and the percentage of free radical scavenging activity was calculated using the formula given below.

ABTS Assay: The total antioxidant activity of the extracts was also measured by ABTS assay. Standard Gallic acid (1mg/ml) was prepared. 3ml of ABTS solution was added for all the concentrations and incubated at 25 0C for 30minutes. The absorbance was read at 745nm and the percentage of inhibition was calculated using the formula. The capacity of radical scavenging activity was determined in triplicates and values were expressed as percentage of scavenging activity.

The percentage of free radical scavenging activity was calculated using the formula given below.

The MCF7 and HCT116 were cultured in ATCC formulated DMEM and RPMI 1640 medium. All cell lines were incubated in CO2 incubator having 5% CO2. 70-80% confluent cell lines were collected. The cells were checked for viability and density with the help of hemocytometer. 50,000 cells / well of both the cell lines were seeded in a 96 well plate and incubated for 24 hrs at 37oC in 5 % CO2 incubator. Various concentrations of all the four extracts were tested ranging from 0-320μg/ml [0, 5, 10, 20, 40, 80, 160 and 320μg/ml; 2 fold variations] concentration in DMEM and RPMI-1640 respectively without FBS and were incubated for 24hrs at 37oC, 5 % CO2 incubator. After incubation MTT reagent was added.

After incubation with MTT reagent, the MTT reagent was discarded by pipetting and 100μl of DMSO was added rapidly to each well. The absorbance was measured at 590 nm. Well containing 1% DMSO was treated as blank. The 50% inhibition concentration (IC50) of the extract was determined. The inhibition of the cell growth caused by the extracts at the lowest concentration by 50% in treated was compared with untreated culture.

The preliminary phytochemical screening of four extracts of J. wynaadensis revealed the presence of flavonoids, phenols, terpenoids. Alkaloids were present only in methanolic extract.

Estimation of Total Phenols and Flavonoids: Flavonoids are potent free radical scavengers, prevents oxidative cell damage and has strong anticancer activity 10, 11. Different phenolic compounds from plants are significant and vital anticancer agents. In several cases, they are more effective and have less side effects compared to synthetic drugs. Extracts of plants belonging to the genus Teucrium, are a very rich source of phenols which indicated high antiproliferative and proapoptotic activity 12. Quantitative estimation of phenols and flavonoids were done by HPLC method. 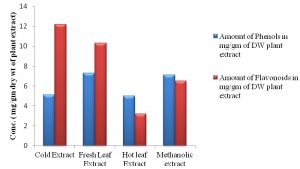 As seen in Fig. 1., it was found that the cold extract, fresh leaves extract, hot extract and methanol extract had total phenol content of 5.1mg/gm, 7.3 mg/gm, 5 mg/gm, 7.1 mg/gm. Total flavonoid content was found to be, 12.2 mg/gm, 10.3 mg/gm, 3.2 mg/gm, 6.5mg/gm respectively (mg/gm of the dry weight of the plant extract). Gallic acid was used as standard for phenol estimation and Rutin was used as standard for flavonoid estimation. Fresh leaves extract had comparatively high phenol content followed by methanolic, cold and hot extract. Flavonoid content was found to be high in cold extract followed by fresh leaves extract, methanolic and hot extract. 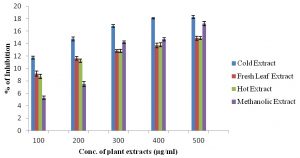 ABTS Assay: In ABTS assay, fresh leaves extract showed the highest radical scavenging activity with 93.9%, followed by cold extract with 83.7% at 500µg/ml concentration and IC50 value was found to be 100.25±3.0 µg/ml and 129.68±6.6 µg/ml respectively (Fig. 3). Free radical scavenging activity determined by ABTS assay was high in fresh leaves extract followed by cold extract at 500µg/ml concentration followed by hot and methanolic extracts. Results are expressed in mean ± SD and Pearson’s correlation is less than 0.05. 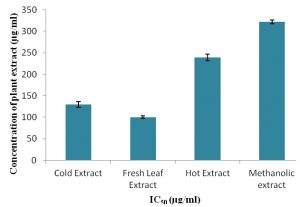 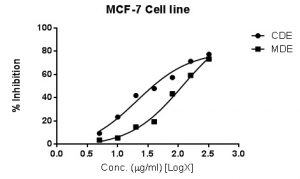 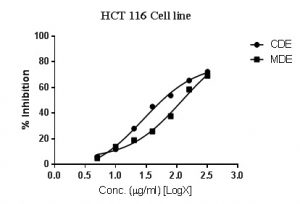 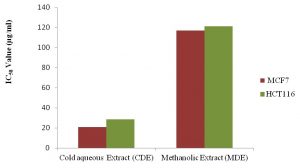 CONCLUSION: In the present study among the four extracts of Justicia wynaadensis leaf, which were subjected to MTT assay on two cancer cell lines MCF7 and HCT116, cold aqueous extract had the high cytotoxic effect, followed by methanolic extract. Further study is in progress to identify and characterize the active component from the cold aqueous extract of the plant, which could serve as a source of potent anticancer agents.