INTRODUCTION:Sponges (phylum: Porifera) are most primitive of the multicelled animals that have existed for 700–800 million years. Of the approximately 15,000 sponge species, most occur in marine environments. Only about 1% of the species inhabits freshwater 1. They inhabit every type of marine environment, from polar seas 2 to temperate and tropical waters 3, 4 and are often more abundant and diverse in the tropics than stony and soft corals 5. These animals are frequently exposed to intense predation and /or tissue infection by microorganisms 6, 7.

Sponges feed on bacteria  8 and are constantly exposed to large populations of water-borne microbes, including opportunistic pathogens and fouling microorganisms. Despite these constant threats and a lack of the complex morphological and cellular defense mechanisms used by higher animals to combat bacterial pathogenesis 9, 10, sponges are highly successful members of the benthos and suffer few obvious bacterial infections. The sponge class Demospongiae is known to produce the largest number and diversity of secondary metabolites isolated from marine invertebrates 11.

A HeLa cell is an immortal cell line used in medical research. The cell line was derived from Cervical cancer cells taken from Henrietta Lacks, who died from her cancer in 1951. Initially, the cell line was said to be named after a “Helen Lane” in order to preserve Lacks’s  anonymity. The objective of this study is to investigate cytotoxic activity of methanol and Dichloromethane extracts from sponges on HeLa cell lines using MTT assay.

Extraction: Sponge specimen was allowed to thaw, cut into small pieces, and then taken in to a graduated Cylinder containing 1000 m1 of dichloromethane and in another cylinder with 1000ml of methanol and covered the cylinder with aluminum foil. And kept in cool and dry place for 15 days. Sponge tissue and solvent were transferred to capped containers and agitated for 24 h. After extraction, the sponge tissue was removed from the container and solvents squeezed from the tissue. The extract was collected by using vacuum separator.  And the solution containing the extract at the volumetric concentration of the original tissue.

Cell lines and Culture condition: The cytotoxicity of the Dichloromethane and methanol extracts was tested against HeLa cell lines. Cells were grown in RPMI-1640 medium supplemented with 10% fetal bovine serum, 2 mM  L-glutamine, 100 Ag/ml streptomycin, and 100 U/ml penicillin, and were incubated at 370C in a humidified atmosphere of 95% air and 5% CO2.

Cytotoxic Bioassay: The proliferation rates of HeLa cells after treatment with essential oils were determined by the colorimetric 3-(4, 5-dimethyl-2-thiozolyl)-2, 5-diphenyl-2H-tetrazolium bromide (MTT) assay. The yellow compound MTT is reduced by mitochondrial dehydrogenases to the water-insoluble purple formazan, depending on the viability of cells. HeLa cells were plated in 96-well plates (105 cells/well for adherent cells or 0.5_105 cells/well for suspended cells in 100 Al of medium). After 24 h, the extract (2–125 Ag/ml) dissolved in distilled water was added to each well and incubated for 3 days (72 h). Control groups received the same amount of distilled water. Tumor cell growth was quantified by the ability of living cells to reduce the yellow dye 3-(4, 5-dimethyl-2-thiozolyl)-2, 5-diphenyl-2H-tetrazolium bromide (MTT) to a purple formazan product.

At the end of the incubation, the plates were centrifuged and then, the medium was replaced by fresh medium (200 Al) containing 0.5 mg/ml MTT. Three hours later, the MTT formazan product was dissolved in 150 Al DMSO, and absorbance was measured using a multiplate reader (Spectra Count, Packard). Drug effect was quantified as the percentage of control absorbance of reduced dye at 550 nm.

TABLE 1:  DETERMINATION OF CYTOTOXICITY FOR METHANOL EXTRACT BY MTT ASSAY

TABLE 2:  DETERMINATION OF CYTOTOXICITY FOR DICHLOROMETHANE EXTRACT BY MTT ASSAY 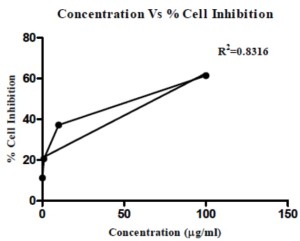 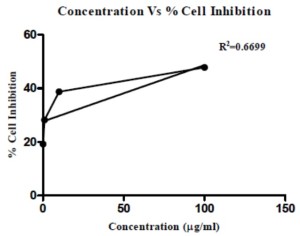 Now over all study evaluate the sponge has potential activity on HeLa cell. So these extracts have considerable for anticancer activity.

CONCLUSION: In conclusion, our study can be considered as the first report on the Cytotoxic property of Soft Halicona species. The results of the Cytotoxic activity against HeLa cell lines in this study are very promising with regards to possible antineoplastic chemotherapy and from a very sound basis for future research.

ACKNOWLEDGEMENT: The authors are grateful to the management of Sri Ramachandra University for providing the necessary infrastructure to carry out this work in a successful manner.