ABSTRACT: The proposed study was to evaluate the in-vitro cytotoxic and antiproliferative activities on prostate cancer cell lines of isocordoin (1) and 2’,4’-dihydroxy-3’-(g,g-dimethylallyl) dihydrochalcone (2), chalcones isolated from roots of Lonchocarpus xuul Lundel, together with four analogues of 1. Isolation of compounds 1 and 2 from L. xuul roots and chemical modification were in accordance with previous works. All compounds were characterized by NMR spectroscopy and mass spectrometry. In-vitro cytotoxic and antiproliferative activities of compounds 1-6 against prostate cancer cell lines PC3, PC3M, DU145, and TRAMPC2, were evaluated using the MTT and sulforhodamine B method, respectively. Additionally, cytotoxic studies with HEK 293 cells were carried out, and a selective index was calculated. From them 2’,4’-dihydroxy-3’-(g,g-dimethylallyl) dihydrochalcone (2), 2´,4´-diacetoxy-3´-(3-methylbut-2-enyl) chalcone (3), 2´-methoxy-3´-(3-methylbut-2-enyl) chalcone (5) together with isocordoin (1) showed the strongest cytotoxic activity on PC3M cell lines in the ranged of 2-3 mg/mL. Isocordoin showed the strongest activity also on TRAMPC2 cell lines (CC50= 1.01 mg/mL). None of the compounds were cytotoxic (CC50 =14 to 667 mg/mL) on HEK293 cell line. Xanthohumol, a natural active chalcone, and docetaxel were used as positive controls. The modifications made to isocordoin (1) in all cases reduced the cytotoxicity of this metabolite on HEK 293 cell lines; however, no antiproliferative properties were detected on compounds 1-6.

INTRODUCTION: The term cancer encompasses a group of more than a hundred different types of the disease whose main characteristic is the rapid and disorganized growth of abnormal cells 1, 2. At present, cancer is a major health problem in many developed countries and the leading cause of death worldwide 3.

Cancer therapy is based primarily on the association of surgical resection of tumors with radiotherapy, immunotherapy and/or chemo-therapy. The efficacy of cancer drugs is often limited by their insolubility and instability, the low rate at which the tissue absorbs them, and drug resistance 4.

Many studies have suggested that flavonoids exhibit anticancer properties, among others 5-7. From then, chalcones (1, 3-diaryl-2-propen1-ones) are a type of flavonoids, which are abundant in most edible plants. Natural and synthetic chalcones display anticancer activity against various tumor cells lines in-vitro and in-vivo 8-11.

From them, isocordoin (1), one of the main chalcone isolated from the root of L. xuul, together with a natural analogue of isocordoin, 2’, 4’-dihydroxy-3’-(g,g-dimethylallyl) dihydrochalcone has been pharmacologically studied 12-13. Isocordoin (1) has been reported in some Lonchocarpus species and has many different biological activities. Isocordoin has demonstrated antiprotozoal activities when it was tested against Leishmania braziliensis, L. donovani, L. amazonensis and Trypanosoma cruzi14-15. Isocordoin (1) can inhibit the cell proliferation of ovarian cancer cells by competing with type II oestrogen binding sites 16. However, there are no studies on the cytotoxic/ antiproliferative activities of this metabolite and its derivatives on different prostate cancer cell lines.

Here we described the isolation and derivatization of isocordoin (1) and their cytotoxic/ antiproliferative activities, together with the evaluation of its natural analogue, 2’,4’-dihydroxy-3’-(g,g-dimethylallyl) dihydrochalcone (2). The in-vitro cytotoxic and antiproliferative activities were assessed against four prostate cancer cell lines: DU-145, PC3, PC3M and TRAMPC2. Parallelly, all derivatives were tested against HEK 293 cells to valorate the cytotoxicity of these metabolites.

Visualization of components were done by using a solution of phosphomolybdic acid (20 g) and ceric sulfate (2.5 g) in 500 mL of sulfuric acid (5%), followed by heating. Reagents for derivatization together with xanthohumol were commercially obtained from Sigma-Aldrich and Fluka companies. Melting points were determined on a Thermocouple apparatus. IR spectra were recorded in KBr disc on a FT-IR Nicolet Protegé. 1 H- and the 13C-NMR spectrum was recorded on a Bruker Avance 400 NMR spectrometer at 400 MHZ and 100 MHz, respectively.

Extraction and Isolation: Powdered roots (1 Kg) of L. xuul were extracted successively with n-hexane (3 × 6 L) at room temperature for 72 h. Evaporation of the solvent under reduced pressure provided 124 g of crude extract (12.43%).

Preparation of 2´, 4´-diacetoxy-3´-(3-methylbut-2-enyl) Chalcone (3): A mixture of 1 (8 mg), acetic anhydride (1 mL), and pyridine (2 mL) was allowed to stir overnight at room temperature. The reaction mixture was poured over water (30 mL) and the resulting suspension was extracted with ethyl acetate (3 times 1:1).

The organic layer was washed (1:1, v: v) successively in water, 5% HCl, 5% NaHCO3 and a NaCl saturated solution. The treatment of the solvent with anhydrous Na2SO4 followed by filtration and evaporation yielded 10 mg of pure compound 3.

Preparation of 2”,2”-dimethypyran (5”,6”3’,4’)-2’-hydroxy chalcone (6): 15 mg of chalcone 1 were heated under reflux for 24 h with 5 mL EtOH, 3 mL H2O, and 0.5 mL conc. HCl. After the reaction mixture was complete (TLC monitoring) the contents were poured into ice water. The solid obtained was purified on gel permeation column chromatography using sephadex LH20 and eluting with MeOH to yield 6 mg of 5.

To inhibit the growth of fungi it was also added amphotericin B and maintained it at 37oC in a 5% CO2 atmosphere with 95% humidity. When cells reached >70% confluence, the medium was replaced and the cells were treated with different concentrations of the compounds dissolved in dimethyl sulfoxide (DMSO).

Antiproliferative Activity: To study cell proliferation, prostate cancer cells were cultured with DMEM medium until they reached >70% confluence in a microtiter plate. After this, the medium was replaced with DMEM 5% FBS. Cells (5 × 104 cells per well) were incubated with appropriate dilutions of the test compounds for 48 h. After 48 h, the medium was discarded, and cells were fixed by adding 50 mL of 10% trichloroacetic acid (TCA, Sigma-Aldrich Chemical, St Luis, MO, USA). The cells were incubated at 4 °C for 30 min; TCA was drained off, and the plates were left to dry. Then, 50 mL of sulforhodamine B stain (10 mg of 1% acetic acid, Sigma) were added to each well for 30 min 31. Finally, the plates were washed four times with 1% acetic acid (100 mL). The OD was measured at 540 nm using and ELISA reader (Bio-Rad).  The concentration of the compound that inhibits cell proliferation (IC50) was calculated by the formula:

Results are expressed as the concentration of compound that reduced cell growth (IC50) by 50%, and they were calculated using the software GrahPad Prism 4. All determinations were per-formed in triplicate.

RESULTS AND DISCUSSION: Successive chromatographic purifications of the hexane root extract of L. xuul, using a combination of VLC, gravity column chromatography, and gel filtration on sephadex LH-20 resulted in the isolation of metabolites 1 and 2 in pure form. The less polar metabolite 1, was obtained as a yellow amorphous solid. The parent ion peak at m/z 308 of its mass spectrum suggested a molecular formula C20H20O3, which in turn indicated the presence of nine unsaturation sites in the structure. The 1H NMR spectrum of 1 showed a number of signals that allowed to identify as 2’,4’-dihydroxy-3’-(3-methylbut-2-enyl) chalcone, commonly named as isocordoin, previously reported from Cordoa piaca, Adesmia balsamica, L. xuul, and other Lonchocarpus species. Metabolite 2 was obtained as colorless oil. Its molecular formula (C20H22O3) was determinated from the molecular ion peak at m/z 310 and consistent with ten degrees unsaturation. The 1H NMR spectrum of 2 showed a number of signals that suggested an isocordoin-type structure, namely two one-proton signals at 6.35 (H-5’, d, J= 8.8) and 7.54 (H-6’, d, J= 8.8) corresponding to the two ortho-coupled protons of a 1,2,3,4 tetra substituted aromatic ring, and two multiples at 7.30 (2H and 7.25 (3H) corresponding to the five protons of a second monosubstituted aromatic ring. Additionally, the 1H NMR of 2 displayed characteristic signals of two methylene groups (A2B2 system) at 3.04 (2H, t, J= 7.7) and 3.24 (2H, t, J= 7.7). Finally, the observed fragment ions at m/z 105 and 91 in the MS of 2 confirmed a dihydrochalcone-type structure. On the basis of its spectroscopic data, metabolite 2 was identified as 2’, 4’- dihydroxy - 3’ - (g, g - dimethylallyl) dihydrochalcone, commonly named as dihydro-isocordoin, previously reported from L. xuul and reported as erioschalcone B from Eriosema glomerata. Isocordoin (1) was first chemically modified at its phenolic hydroxyl position to get three different analogues (3-5). Compound 3 corresponds to the fully acetylated derivative of 1 named 2´,4´-diacetoxy-3´-(3-methylbut-2-enyl) chalcone. On the other hand, compounds 4 and 5 correspond to the dimethylated and monomethylated derivative of 1, named 2´, 4´-dimethoxy-3´-(3-methylbut-2-enyl) chalcone (4) and 2´-hydroxy-4´-methoxy-3´-(3-methylbut-2-enyl) chalcone (5), respectively. Modification of the prenyl chain of 1 allowed to obtain compound 6, named 2”,2”-dimethypyran (5”,6”3’,4’)-2’-hydroxy chalcone. Compound 7 corresponds to a commercially available xanthohumol (7). All compounds (1-7) Fig. 1 were assayed for their cytotoxic and antiproliferative activities on four prostate cancer cell lines: DU-145, PC3, PC3M, and TRAMPC2, and the results are illustrated in Table 1 and 2. 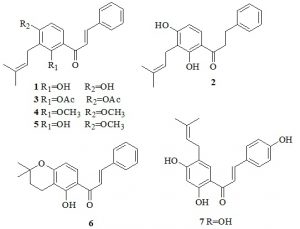 The results obtained of the cytotoxic activity showed that almost all compounds, except compound 6, were active on the PC3M cell line with a CC50 of 1.76-3.52 mg/mL Table 1. Compound 4 showed a moderative activity against PC3M (CC50=10.47 µg/mL). On the contrary, none of the derivatives 1, 4, 5, and 6 were active against DU-145 and PC3 (CC50> 40 µg/mL), except xanthohumol, which means that the presence of the prenyl chain is important for the effectiveness of the cytotoxic activities of chalcones. Previous studies had been reported the importance of the prenyl chain in the biological activities of flavonoids. Some authors report that the presence of prenyl chain increases the hydrophobicity and pharmacological properties through enhanced affinity for the lipophilic membrane 16. In addition, the cytotoxic activity of hydroxylated compounds 1, 2, and 7 are in accordance of previous studies on structure-activities relationships that demonstrated that the biological activities were determined by the number of oxygenated substituents (OH), an ability that is related to the collapse of mitochondrial membrane potential and increased oxygen uptake 17. In the case of isocordoin derivatives, the cytotoxic activity increased slightly after esterification of both hydroxyl groups (3) on PC3M cancer cell lines (CC50= 2.56 mg/mL). On the contrary, the dimethylated derivative (4) showed a minor cytotoxic activity in comparison with the monomethylated (5) derivative (CC50=3.05 mg/mL) in the same cancer cell line. In order to confirm the selectivity of the analogues on prostatic cancer cell lines, the in-vitro cytotoxic evaluation against HEK 293 cell line was performed. According to the National Cancer Institute, one compound is considered cytotoxic when it has an IC50 value of £4 mg/mL. None of the compounds tested showed cytotoxic effects on HEK 293 cell line with a CC50 value between 14-667 µg/mL Table 1.

TABLE 1: IN-VITRO CYTOTOXIC ACTIVITIES (CC50) OF ISOCORDOIN AND ITS ANALOGUES

Data are expressed as mean standard deviations of three determinations.

While cytotoxicity determines the capacity of cells to survive or die in the presence of the compounds, cell proliferation allowed measuring the capacity of the compounds to affect cell division and proliferation, which is of special relevance in all types of cancer cells. As can be seen in Table 2, treatment with different concentrations of compounds 1-6 does not affect cell proliferation of almost all prostatic cancer cell lines. Compound 1 showed a moderate antiproliferative activity on PC3 (IC50= 8.12 µg/mL) and PC3M (IC50= 8.30 mg/mL) cell lines in comparison with compounds 2-6.

TABLE 2: IN-VITRO ANTIPROLIFERATIVE ACTIVITIES (IC50) OF ISOCORDOIN AND ITS ANALOGUES

Data are expressed as mean standard deviations of three determinations.

Recent studies made by Da Silva et al., (2019) demonstrated the antiproliferative action of a mixture of isocordoin (1), 2´,4´-dihydroxy-5´-prenylchalcone (2), prenylpinocembrin, lupeol, and lupenone contained in the hexanic extract of aerial part of Lonchocarpus cultratus against cells of chronic myeloid leukemia K562 (GI50=0.71 µg/mL), breast MCF-7 (GI50=2.53 µg/mL) and ovary multidrug resistance phenotype (GI50=2.67 µg/mL) 18. In addition, 2´,4´-dihydroxy-5´-prenylchalcone (8) has potent cytotoxic activities against breast (Hs578T), prostate (PC3), and liver (Hep G2) cancer cell lines with IC50 values 1.3,0.1 and 7.3 µg/mL, respectively. Therefore, it is not ruled out that the synergistic combination of isocordoin derivatives could potentiate the antiproliferative activity on prostate cancer cell lines. In summary, chalcones are important prototypes of anticancer drugs, mainly on ovarian and prostatic cancer cell lines. Strategies in the evaluation of the synergistic combination of derivatives 2-6, together with isocordoin (1) will be the subject of future work. This is the first report on the cytotoxic and antiproliferative activities of isocordoin derivatives on prostatic cancer cell lines.

CONCLUSION: We concluded that some modifications on isocordoin structure, especially the acetylation of both hydroxyl groups increasing the cytotoxic activity of this metabolite, and it has a better effect in PC3M cell lines.

The position of the substituents seems to be important for the effectiveness of the cytotoxic activity evaluated. The modifications made to isocordoin in all cases reduced the cytotoxicity of this metabolite on HEK 293 cell lines so far; however, no antiproliferative properties were detected on compounds 6-7.