Attempts are now-a-days being made to utilize these waste materials to produce bioactive substances such as antibacterial, anticancer and antiviral agents. Cephalopod ink has shown potential antiretroviral activity 3.The peptidoglycan and acetone delipidated ink of squid (Illex argentinus) showed antitumour activity 4 5. The ink and tissue extracts of Cuttlefish and squid showed antibacterial effect 6 7 8 9 10.

Measurement of cell proliferation rates are often used to determine the response of cells to a particular stimulus or toxin. Because of the large size of the chick embryo, it is easier to dissect out individual organs to generate specific cell types such as hepatocytes, fibroblasts, cardiac muscle and lung epithelium 11. The present study was designed to investigate the cytotoxic effects of the cuttlefish and squid ink extracts using chick embryo fibroblasts.

Extraction of Cuttlefish and Squid ink: Three species of cuttlefish (Sepia pharaonis -female and male, Sepiella inermis -female, Sepia aculeata –female) and squid (Loligo duvauceli -female) were collected from the fishing harbour, Kochi, Kerala, India and brought to the laboratory in ice cold condition. The animals were carefully dissected to remove the ink sac. The ink from different species of cuttlefish and one species of squid were used for extraction. Known weight of the ink was delipidated with acetone at -20oC for 96 h.

The acetone was changed every 24 h after vacuum filtration. The defatted residue was vacuum dried to give a black powder. This powder was extracted with 40 volumes of 0.1 M Tris-HCl buffer (pH 6.8) at 4oC for 48 h, followed by centrifugation at 13,000 x g at 4oC for 30 min. The supernatant was dialysed against distilled water at 4oC for 48 h and then lyophilized to obtain an off-white powder. This powder was dissolved in normal saline (500 µg/ml) and was used as stock solution for cell culture studies.

Preparation of chick embryo fibroblasts and cell culture: Embryos from nine days old embryonated eggs were collected by breaking the eggs under aseptic condition in a sterile inoculation hood. For this the eggs were initially cleaned with 70% ethanol and the broad end of each egg was opened with sterile scissors and the piece of shell with the white membrane underneath was carefully removed. The embryos were removed by sterile forceps and transferred to Petri dish containing sterile Hanks Balanced Salt Solution (HBSS).

The head and internal organs were discarded and the muscle tissue was washed with HBSS to remove the erythrocytes. This was chopped into small pieces and again washed with HBSS. The slices were then treated with 0.25% trypsin-EDTA solution and shaken to loosen the cells.

The cell suspension was then filtered through cheese cloth to remove debris. The suspension was centrifuged at 5000 rpm for 3 min. The supernatant was discarded and the cells were dispensed in growth medium [DMEM enriched with 10% FBS, Penicillin (100 units/ml), Streptomycin (100 µg/ml) and amphotericin B (2.5 µg/ml)]. The cells were dispensed into T-25 cm2   tissue culture flasks and allowed to become 80% confluent (incubated at 37oC in an atmosphere of 5% CO2). The cells were then trypsinised and seeded into 96-well plates and 12-well plates for viability assay and dual staining (acridine orange / ethidium bromide staining) respectively.

Cell viability assay using Trypan Blue: Viability is a measure of the metabolic state of a cell population, which is indicative of the potential of the cells for growth. The fibroblast cells (5000 cells/well) in microtitre plates were treated with different concentrations of cuttlefish (Sepia pharaonis female and male, Sepiella inermis female, Sepia aculeata female) and squid (Loligo duvauceli female) ink extract (0, 25, 50 and 75 µg/ml). Each treatment was carried out in quadruplicate. The cells were incubated at 37oC in an atmosphere of 5% CO2 for 24 h. The cells were then trypsinised using 100 µl of 0.25% Trypsin EDTA solution for 1 minute and neutralized using 100 µl of FBS. The viability was determined by Trypan blue dye exclusion method 12.  The percentage of cells that were not stained with Trypan blue (viable cells) is the measure of the viability. The percentage viability of cells over the control was calculated using the formula

Ethidium bromide/acridine staining: Loss of cell viability and nuclear condensation are a result of necrosis or apoptosis 13. Cells (5 x 105 cells/well) were seeded in 12-well plates and the cells were incubated with different concentrations (0, 25 and 75 mg/ml) of cuttlefish (Sepia pharaonis female) ink extract for 24 h. After washing once with phosphate- buffered saline (PBS), the cells were stained with 100 µl of a mixture of acridine orange/ethidium bromide (1:1) solutions. The cells were immediately washed once with PBS and viewed under microscope using a suitable filter 14.

Statistical analysis: The data were subjected to analysis of variance and differences determined at 5% level of probability 15.

Effect of ink extracts of different species of Squid and Cuttlefish on Chick Embryo Fibroblasts:  The graph, Figure.1 showed that the cell viability of chick embryo fibroblasts treated with ink extract from Sepia pharaonis female was decreased to a significant extent in 24 h, whereas those treated with other four ink extracts (Sepia pharaonis male, Sepiella inermis female, Sepia aculeata female, Loligo duvauceli female) showed less significant effect. From the above results, it may be concluded that, among different species of squid and cuttlefish tested, ink extract from Sepia pharaonis female shows the most significant effect on cell viability. The significant reduction in the number of live cells in the treated samples compared to the control is a clear indication of the cytotoxic effect of cuttlefish ink extract. The extract inhibited cell proliferation and induced cell death in a dose dependent manner. Since the ink extract from the female Cuttlefish, Sepia pharaonis showed the highest cytotoxic activity, further studies were made using this extract. 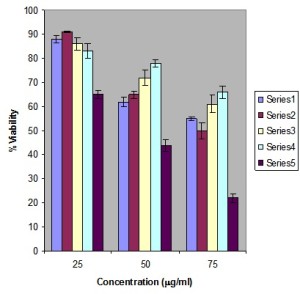 FIGURE: 1: EFFECT OF INK EXTRACTS OF DIFFERENT SPECIES OF SQUID AND CUTTLEFISH ON CHICK EMBRYO FIBROBLASTS

Upon treatment with different concentrations (25 and 75 µg/ml) of cuttlefish Sepia pharaonis female ink extract, nuclear condensation was visible in chick embryo fibroblasts at 24h whereas the untreated control cells were healthy with very less staining. The results were shown in Figure 2. 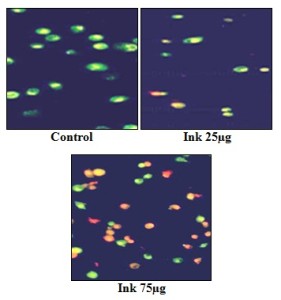 DISCUSSION: The cytotoxicity of the melanin free ink of cephalopod, Sepia officinalis was reported 16. Cuttlefish ink finds wide applications in homeopathic medicine (medicinal name ‘Sepia’). In homeopathy it was used to treat hormonal imbalances especially in woman 17. In the present study tris extracted ink of cuttlefish Sepia pharaonis, female showed the highest cytotoxic activity. The antiproliferative activity of the ink extract revealed the cytotoxic effect of the ink extract of cuttlefish Sepia pharaonis. Squid ink has been reported for its antitumour activity 18. The squid ink extract have protective effect towards hemopoitic injuries from chemotherapeutics 19.

There is evidence that methanolic extract of squid had anticancer activity. 20. Our investigation also reveals that the ink can also induce nuclear condensation which is the characteristic feature of apoptosis 21. Both chick embryo fibroblasts and cancerous cells are undifferentiated immature cells and they share certain common characters. So the cytotoxic effect of the ink extract renders its therapeutic potential as an anticancer agent.

CONCLUSION: The result of the present study reveals the cytotoxic effect of the ink extract of cuttlefish (Sepia pharaonis) on chick embryo fibroblasts. The finding renders its therapeutic potential as an anticancer agent. Since the ink is a cheap and readily available waste material of processing industry, it will be meaningful to look at ink as a potential raw material for drug production through further studies.

ACKNOWLEDGEMENTS: We are acknowledged to NATP the funding agency for the financial support given. The authors are also grateful to the Dean, College of Fisheries, Kerala Agricultural University, for the facilities provided for the research work.