ABSTRACT: This paper reports the cytotoxic activities of the hexane, dichloromethane, ethyl acetate, and methanol fractions of the marine sponges: Paratetilla sp., Stylissa sp., and Petrosia (strongylophora) nigricans, collected from the Island waters of Lipata, Surigao del Norte, Philippines, using the enzymatic reduction of a yellow tetrazolium salt, 3-(4, 5-dimethylthiazol-2-yl)-2, 5-diphenyl-tetrazolium bromide (MTT) against four cancer cell lines HCT116 (colon), MCF7 (breast), HepG2 (liver) and A549 (lung). The assay revealed that most of the fractions are favorably active to only HCT116; except for the dichloromethane fraction of Stylissa sp., which demonstrated remarkable cytotoxicity against MCF7 and HCT116 with % viability of 15.72±0.03% and 21.48±0.07%, respectively, after treatment with 30µg/mL of the sponge extract.

INTRODUCTION: The success of natural products in drug development has been documented comprehensively. Unforgettable is the well-known history-changing drugs, such as penicillin, morphine, paclitaxel, avermectins and artemisinin. To date, more than 28,500 marine natural products have been reported, at a speed of about 1000 new compounds per year since 2008, including  1490 new compounds in 2017 1. In 2015, William C. Campbell, Satoshi Omura, and Youyou Tu were awarded the Nobel Prize in Medicine to discover avermectins and artemisinin, respectively 2.

Despite great progress in drug discovery to treat various diseases, the devastating effects of communicable and non-communicable diseases continue to pose an immense challenge for global public health. Finding effective candidate drugs that can protect patients from these diseases is an invariable mission both in academia and the pharmaceutical industry. Remarkably, natural products provide an endless supply of biomaterials to help search for and design pharmacologically important drug leads 3.

This research aims to evaluate the potential anticancer activity of the Philippine marine sponges: Paratetilla sp., Stylissa sp., and Petrosia (strongylophora) nigricans against four cancer cell lines HCT116 (colon), MCF7 (breast), HepG2 (liver), and lung (A549). The bioassay screening revealed that almost all of the fractions of the four marine sponges were favorably active towards HCT116 colon cancer cells.

Collection of Sponges: The marine sponges were collected off the coast of Surigao City by hand scuba at a depth of 5-10 meters by local sea divers in April 2014. The samples were stored in sterile containers and transported to the Natural Products and Bioorganic Research Laboratory of the Department of Chemistry, Mindanao State University – Iligan Institute of Technology (MSU-IIT), Iligan City. The approximate weight of voucher specimens of each sample was prepared for taxonomic identification. The collected samples of marine sponges were then set for freeze-drying. Dr. E. Metillo of the Department of Biological Sciences, MSU-IIT, the taxonomic identification of each marine sponge sample.

Solvent Extraction and Partitioning: Each of the freeze-dried and pulverized marine sponge samples was soaked in 1:1 ethyl acetate-methanol (EtOAc-MeOH) mixtures for three days. The mixture was then filtered, concentrated in vacuo using a rotary evaporator, and weighed to give the nonpolar extract. Each of the nonpolar extracts of Paratetilla sp. (Psp), Stylissa sp. (Ssp) and Petrosia (Strongylophora) nigricans (PSn) was dissolved in methanol; the remaining residue was labeled as ethyl acetate fraction and further concentrated in a rotary evaporator. The methanol fraction was then partitioned with hexane followed by dichloromethane (DCM).The entire process yielded: ethyl acetate fractions (PspEA, SspEA, PSnEA); hexane fractions (PspH, SspH, PSnH); DCM fractions (PspD,SspD, PSnD) and aqueous methanol fractions (PspM, SspM, PSnM).

Test for Cytotoxicity MTT Assay: The MTT assay developed by Mossman (1983) 4 is a convenient and safe method for the determination of viable cell numbers. The MTT assay is a colorimetric assay that relies on the capacity of mitochondrial dehydrogenase enzymes in living cells to convert the yellow water-soluble substrate (MTT) into a dark blue formazan product that is insoluble in water. Viable cells are able to reduce the yellow MTT under tetrazolium ring cleavage to a water-insoluble purple-blue formation. In contrast, cells being dead following toxic damage cannot transform MTT. This formation production is proportionate to the viable cell number and inversely proportional to the degree of cytotoxicity 4.

Assay Proper: The cancer cell lines were cultured in Dulbecco’s modified Eagle’s medium (DMEM, Invitrogen) supplemented with 10% fetal bovine serum (FBS, Sigma-Aldrich) and 1% antibiotic-antimycotic (Invitrogen) humidified at 37 °C with 5% CO2. A 90 µL cell suspension containing 20 000 cells was seeded in a 96-well microplate except for the Blank wells and incubated overnight at 37 ºC and 5% CO2 atmosphere. After 24 h incubation, 10 µL of each prepared sample was added to their corresponding wells in a 96-well plate. Then, the plate was incubated overnight at 37 ºC and 5% CO2 atmosphere.

A 15 µL Dye solution was added and incubated for 4 hours at 37 ºC and 5% CO2 atmosphere. After incubation, a 100 µL of Solubilization Solution/Stop Mix was added to all wells and incubated for 1 hour at room temperature in the dark. Then, absorbance reading at wavelength 570 nm was done using Victor X3 Spectrophotometer with Plate Reader. Digitonin serves as the positive control for this assay. The cytotoxic activity expressed as % viability was calculated using the equation below:

RESULTS AND DISCUSSION: The solvent partitioning of the nonpolar crude extract of Paratetilla sp. (Psp), Stylissa sp. (Ssp), and Petrosia (Strongylophora) nigricans (PSn) afforded to give a total of 12 fractions all in all. Table 1 shows the summary results of the solvent partitioning with the corresponding weights.

On the other hand, the cytotoxicity assay results of the three marine samples are summarized in Tables 2-4. The measurement was done in quadruplicates, and the reported cytotoxic activity was calculated relative to the negative control DMSO. The results were then compared to the established protocol of International Organization for Standardization (ISO 10993-5) 5 which states that: cytotoxic activity, which is less than 25%, is regarded as highly cytotoxic; activity in between 25 and 50% is considered as moderately cytotoxic;  50 to 70% is mildly cytotoxic, and viability higher than 70% is inactive.

Table 2 shows the cytotoxic activity of Paratetilla sp. (Psp) fractions at 30µg/mL. According to the International Organization for Standardization (ISO 10993-5), the data on the table inferred that the fractions were inactive in HepG2, MCF7 and A549. However, in HCT116, the fractions showed promising activity; notable of which is the aqueous methanol fraction (PspM) (24.30 ± 0.06% viability; highly cytotoxic) and the ethyl acetate (PspEA) and DCM (PspD) fractions (% viability of 46.83 ± 0.11 and 47.54 ± 0.12, respectively; moderately cytotoxic).

Table 3 summarizes the cytotoxicity results of Stylissasp (Ssp) against four cancer cell lines. As shown, the dichloromethane fraction (SspD) was remarkably toxic to MCF7 and HCT116 cancer cells with 15.72 ± 0.03 and 21.48 ± 0.07 % viability, accordingly. Also, mild cytotoxicity to HCT116 was displayed by ethyl acetate fraction (SspEA, % viability = 51.41 ± 0.12), and the rest of the fractions were inactive.

The cytotoxicity results for the marine sponge Petrosia (Strongylophora) nigricans (PSn) are shown in Table 4.

The acquired data revealed that most of the fractions were sensitive to only HCT116. 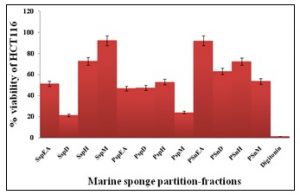 The genus sponge of Stylissa has been reported to be of prolific sources of cyclopeptides: phakellistatins, stylisins, stylissamides, hymen-amides, axinellins, axinastatin, and wainunuamide, to mention a few. Bioassay revealed that some of these macrocyclic compounds possess antifungal activity and cytotoxic effects against human tumor cell lines by inhibiting the degranulation release of human neutrophil elastase 6, 7.

These reports validated the remarkable cytotoxicity displayed by Stylissa sp. in this study. Previous work on Tetillidae (family of the genus Paratetilla) had identified several primary and secondary metabolites 8. Two biologically active proteins from this family have been isolated, one of which is the potently cytotoxic hemolysin, and the other is a novel protease inhibitor with homology to the Kunitz family of serine protease inhibitors 9. Cytotoxic activity directly associated with Paratetilla sp. can be found nowhere.

Chemical investigations of Nheim et al., (2013) 10 on P. nigricans Lindgren, 1897 revealed that the sponge possesses moderately cytotoxic components to four human cancer cell lines, HepG2 and KB LU-1, and MCF-7, with IC50 values ranging from 20.7 - 28.9μg/mL. Conversely, this study observed the inactivity of the fractions towards MCF-7 and HepG2. The unmatched activity observed in the two cell lines can be attributed to the level of purity of the tested sample. The fractions in this study need to be purified further. At the crude level, impurities can mask the active compounds responsible for the cytotoxic properties of the sample, which is likely the case in this research.

CONCLUSION: The results of this study revealed that the marinesponge fractions were particularly cytotoxic to HCT116 colon cancer cells, except for the dichloromethane fraction (SspD) of Stylissa sp., which was also cytotoxic against MCF7. These findings propose the capacity of the sponge fractions to penetrate the cell membrane of HCT116 following the knockdown of the activity of the enzyme mitochondrial dehydrogenase, which cause cell death 4.

Hence, the active sponge fractions could be a potential source as drug leads for colorectal cancer, the deadliest and the most common cancer disease 11.

Among the three marine samples, the order of cytotoxicity towards HCT116 is Stylissa sp. >Paratetilla sp. >Petrosia (Strongylophora) nigricans. The potency displayed by Stylissa sp. in this study coincides with the reported literature. On the contrary, Petrosia, which is known to be toxic to some human cancer cell lines, was found to be inactive in this toxicity evaluation.

On the other hand, no published articles were found for Paratetilla sp. The toxicity results obtained from this research suggest further purification of the active sponge fractions to isolate active components and anticipating them to contribute to the anticancer database as potential anticancer drug leads.