DANGEROUS WORLD OF COUNTERFEIT DRUGS – PHARMACIST’S ROLE AND ITS PREVENTION

DANGEROUS WORLD OF COUNTERFEIT DRUGS – PHARMACIST’S ROLE AND ITS PREVENTION

ABSTRACT: Escalating social evil and global problem for pharmaceutical scientist world-wide is counterfeiting of drugs. Fraudulent representation of medication with an intention to deceptively represent its origin, authenticity and effectiveness is a counterfeited faked drug which is a potential massacre. The prominent role of drug is patient life-saving, but a drug being counterfeit encounters additive danger to patient. Global scenario indicates India accounts for one third of counterfeit drugs world-wide, being existence since 1982. It is spreading its roots in top most selling drugs like steroids, anticancer etc. This review provides an insight into the planning of counterfeit-free world by implementation of WHO guidelines, updating training programs for pharmacist, adapting innovating methods. The counterfeiters use sophisticated technology for huge profit and less trade risking for counterfeiting of drugs. This difficult task can be overcome by different diagnostic patterns like digital imaging, radio frequency identification (RFID), holographic labels, infra-red inks, supply chain tracking, chemical fingerprints. Inspite of increasing globalization and cross border trading, pharmacists play a major role in curbing the menace of proliferating counterfeit drug by holding the hands of all nations and enlighting a flawless path in pharmaceutical industry

INTRODUCTION: Counterfeiting of drug is an age-old practice and dangerous scenario prevailing in the world. According to WHO, the counterfeiting can be defined as “one which is deliberately and fraudulently mislabeled with respect to the identity or source”.

The counterfeited drug which has no therapeutic value is the main reason for the prolonged illness, increased spreading of the pathogen, and may also lead to death.

Counterfeited drugs are not substandard drugs since they never meet all the standards similar to the authentic drug. It serves as an obstacle in restoring health and life saving of people. Recent trends to combat the spreading of the counterfeiting of drugs include radio frequency identification, holographic labels, Raman spectroscopy, nanotags, chemical fingerprints.

Reasons for Counterfeiting: The trouble shooting problem of the counterfeiting mainly arises due to the following reasons:

Global scenario: India accounts for 35% in fake drug import FDA claims the fake drug consumption may go upto 30% and 40% globally by extending its wings lucratively in the midst of pharmaceutical drugs. India is fast becoming the capital for counterfeit drugs. International policy network (IPN) states 7, 00, 000 deaths from malaria and TB arise in 2010 due to counterfeiting. Contamination of heparin by Chinese counterfeiters in 2007-2008 killed 149 patients in USA. According to WHO reports about $ 182000 worth of counterfeit drug for diabetes, blood pressure, cancer were seized in china, almost 2000 people were arrested. In 2010 council of Europe drafted mediclime convention constitutes binding international standard for criminalizing manufacture and distinct of counterfeit drug 1-2.

The following data was submitted as an investigation report by FDA 6. 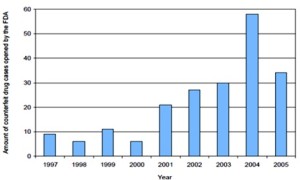 Raman Spectroscopy: Raman spectroscopy is increasingly used in the pharmaceutical field for ease of detection of the counterfeit drugs. This technique has been widely used to detect the illicit drugs such as cocaine, heroin, and ecstasy. This technique is prominently used in the identification of the active ingredients of the drug and excipients in tablets, polymorphism, imaging and mapping. Mapping is used to determine the homogeneity of the ingredient. It is also used in head space analysis of sealed vials. Raman spectrum can be recorded rapidly without any sample preparations. Raman spectroscopy is used in the qualitative analysis of various counterfeited drugs especially erectile dysfunction drugs such as Viagra®, Cialis®, Levitra®. The main principle behind it, is the comparison of Raman spectra of the genuine and the counterfeits.12-15

In addition to visual inspection, Raman spectroscopy also helps in analysis of the packaging and labelling. But the spectra of the packaging of both genuine and counterfeit showed near similarity 16-18. 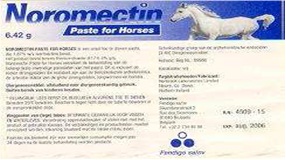 Thus in Raman spectroscopy, with help of presence or absence of bands the counterfeits could be differentiated from genuine samples.

Tagging: Taggants are markers which can be added to the product or packaging with the help of the UV lamps or microscope to differentiate the genuine drug. There are four different types of taggants – physical, chemical, biological, spectroscopic. For spectroscopic inks which are UV absorbers are used, for biological ink with strands of specific DNA can be used, while for chemical materials which can be detected by IR spectroscopy and X-ray fluorescence can be used and the physical taggants include the microscopic plastic particles which are visible with only microscope 19-22.

Radio Frequency Identification Technology (RFID): RFID is the most promising technology in tracing and tracking pharmaceutical supply chain. It utilizes e-pedigree system which stores and retrieves data using devices such as RFID tags or transponders. These tags are computer chips embedded in package which can be activated by the radio sensors that are electronically scanned and stamped. Food, drug and cosmetic act enhances the development of standards for the identification, validation, authentication, tracking of prescription oriented drugs 22-25.

CONCLUSION: India accounts for one third of counterfeited drug marketing, the responsibility of its erosion lies mainly on Drug Regulating Authorities, Judicial entities and all pharma companies at national and international level. Counterfeiters are becoming sophisticated thus on the simple visual inspection of drugs counterfeited drugs cannot be detected. By using various techniques such as Raman spectroscopy, tagging, Radio frequency identification techniques counterfeits could be differentiated from genuine samples and could be discarded.